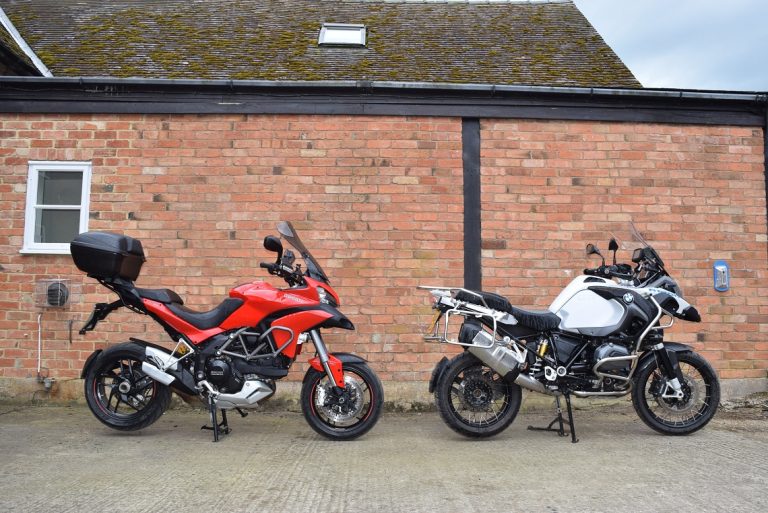 Two completely different bikes; one a fast road bike, the other a competent all-rounder

The olive matt GSA has been replaced with a white one for this issue, which we have to say actually looks the part, alleviating some of the heaviness around the front end of the new GSA design. Colour apart, it’s exactly the same bike as we’ve been getting to grips with over the past month or so and I have to report it has grown on us to the point at which you can’t help but like it.

This was partly achieved on the ride over to Wales for the GS Trophy, and then more recently going home on it to see relatives, who oddly saw it as achieving some sort of success in life. ‘You’re riding a GSA; you must have made it!’, was kind of the sentiment behind it. Had I turned up on the V-Strom they wouldn’t have said it, and so that, if nothing else, cuts to the psychological appeal of the GSA, regardless of how good it is to ride or not.

That aside, in all conditions, on all road services, the GSA does nothing but impress. The speed at which you can take badly surfaced twisting roads is far quicker – and more reassuring than most other bikes (including the Ducati).

Where the GSA has been slightly less than impressive is on the motorway. At high cruising speeds, it has the feeling of punching through the air, rather than gliding through it. There is then a fair amount of buffeting, not to mention road noise coming up through the gap between the headstock and the fairing. Tyre noise? Wind noise? Not entirely sure, and the screen isn’t perfect either.

It isn’t braced firmly enough, meaning that it is always blowing and flexing in the wind; the flapping top edge of it right in your line of sight. No, as a strict motorway cruiser there are better bikes; the new RT being one of them, plus anything else not hampered by the GSA’s colossus front end wedge that seems a magnet for buffeting and turbulence.

How does it compare to the Ducati? In reality, it doesn’t compare at all. The BMW – whilst not perfect – has a breadth of talent (despite the motorway grumbles) unmatched by most other big adventure bikes, let alone the Ducati. The Ducati is an adventure bike in name alone. In reality, it’s more an upright sports bike.

The suspension is firm, the throttle response harsh and away from the tarmac, it’s out of its depth. Frankly, as much as Alun loved it, I thought the opposite, proving once again that no two tastes are the same and somewhere out there is a bike just right for you.

I do look forward to spending more time on the Ducati, something which will either prove my initial judgement right or equally, prove it wrong. I just can’t help but feel that the Ducati is a little overpowered. Indeed, it only goes as fast as you wish to make it, but whereas the GSA (and the V-Strom) have engines that you can exploit and get maximum value out of, the Ducati has that much power that a third of it is barely useable, and when it is useable, you come away from the experience adamant that you have to slow down next time. Fun and fast if you’re into that sort of thing, but for adventure, I’d stick with the GSA.