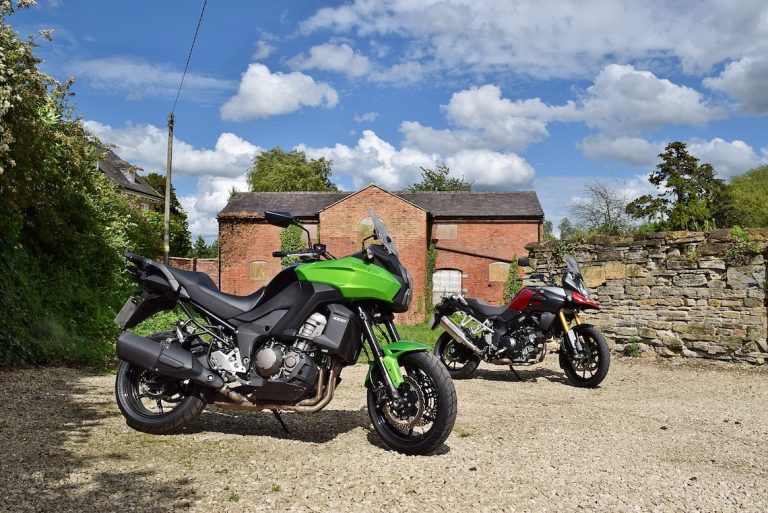 How does it compare to the Suzuki V-Strom 1000?

The Versys 1000 was launched back in 2012, and can hardly be heralded as a roaring success. You see a fair few Versys 650s, but not many of the 1000s (same story with the V-Strom really). Alun’s original review at the time of launch was lukewarm to say the least, as were some of the other magazines. But when you listen to what people who own the big Versys have to say about it then you hear only good things.

It is then one of those bikes that has slipped beneath the radar, possibly because it didn’t have the brand or the focus of purpose behind it. It was an ‘adventure’ styled bike based on the Z1000 touring bike; same engine, same frame, just given a more upright riding position and a visual redesign that could best be described as awkward. And yet strangely, in this new for 2014 Kawasaki green (why they didn’t launch it in the company’s stock colour is a mystery), the bike looks rather good, certainly to the eyes of non-bikers, who were often complimentary of how the bike looked. 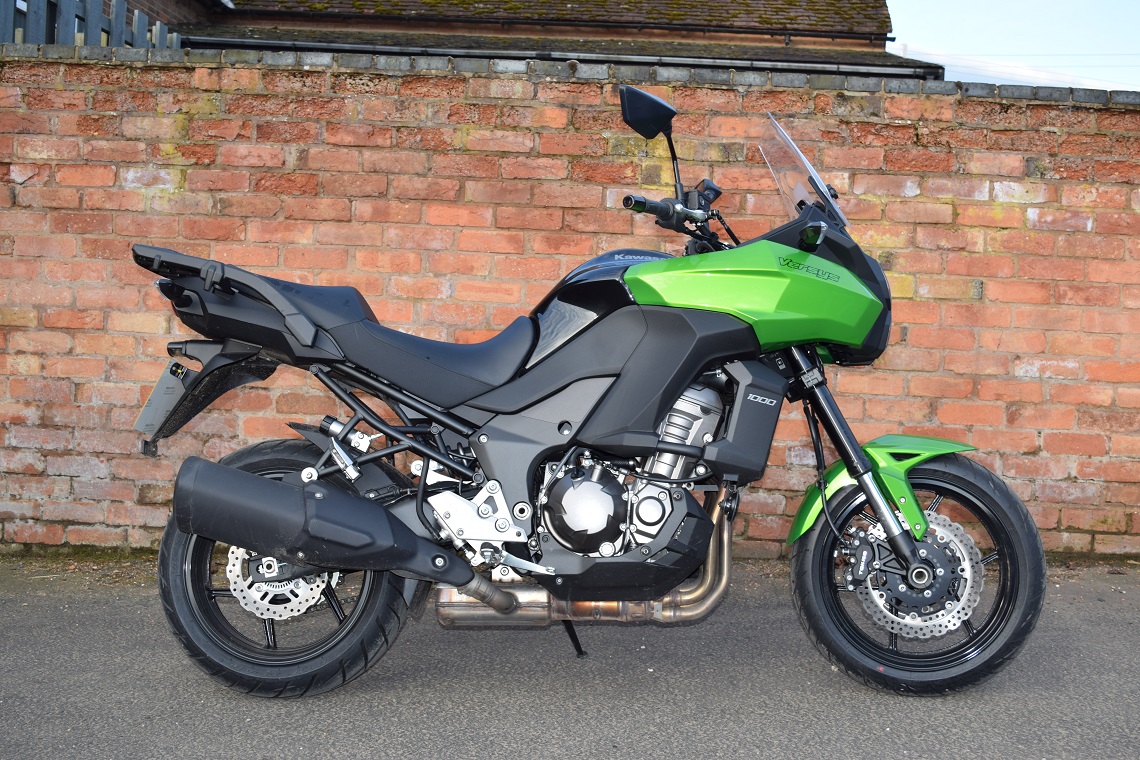 Aesthetics aside, it was how the bike rode that we were interested in, especially in comparison to our V-Strom 1000 long termer, which is of a similar ilk and proposition. Had the planets aligned we’d have had a Tiger 1050 here as well, as those three bikes are a trio of 1000 adventure sports bikes that seem to sit in a niche of their own amidst the core adventure bike market. The biggest difference between the Kawasaki and the Suzuki, first and foremost, are the engines and the front wheel size. The Suzuki has that rumbling, thunderous V-twin (originally fitted to the TL1000 sports bike), whilst the Kawasaki puts to good use the 1043cc in-line four from the company’s touring and sports range.

In terms of power the Kawasaki is 15bhp up on the Suzuki, but it’s not the numbers that make the difference, it’s the delivery. The Kawasaki is much smoother low down, always on the boil. It’s zippy; useable, with you able to stick it in sixth gear at speeds as low as 30mph and it’ll still pull cleanly. The Suzuki by comparison is luggy, requiring fourth at such speeds. Mid-range however belongs to the V-Strom, especially in terms of character. A big bassy sound, mated to a walloping punch, making the Suzuki feel quicker than it actually is, though the Versys would have it in a straight line, no doubt about that.

The main flaw of the Kawasaki engine is the ‘snatchy’ roll-on/roll-off of the throttle, making it hard to ride smoothly at low speeds, something you’d probably adjust to overtime.

Personally speaking, it’s the thumping lump of the Suzuki that makes more sense in this type of bike, possibly because that’s what we’ve become accustomed to in our adventure bikes.

Same goes for the wheel size. The Suzuki has a 19-inch front, whereas the Kawasaki manages with a 17-inch.

For us, in terms of composure and ability to deal with rough surfaces – mid-corner stability for the average rider as well – the bigger wheel wins hands down. The smaller wheel feels scatty and more darty by comparison. It is more suited to smoother roads (and quick direction changes), which is hardly what we’re blessed with in the UK these days. In terms of engine and geometry then, for me, the Suzuki is the better bike. But that is just one opinion.

Gear tester Bryn, on the ride down to Laguna for the four bike test, declared the Versys to be his favourite bike of the day. He liked the engine, the riding position; the overall meat of the bike. And in fairness, he’s a big bloke, and the big Kawasaki did seem to suit his frame much better than the Suzuki, which looked overwhelmed – visually – by someone his size. This is perhaps one of the reasons the new V-Strom hasn’t been as popular as it could have been with riders of the old model; it’s just not as ‘blokey’, and could be considered too fussy and feminine.

The Versys is also arguably the most comfortable of the two over distances. The seat is soft and wide. The stretch to the ground isn’t too far, and the pillion seat is also far more substantial than on the V-Strom. The Versys is much more of a two-up touring bike. The Suzuki, by comparison, seems more suited to one-up commuting and back road blasting, as the handling on the big Strom is cleaner, crisper and tighter than on the Versys, but on a long run can start to feel a touch firm and unforgiving (though softening of preload and damping has helped).

Prices for the two bikes are almost comparable, with the Kawasaki officially £500 less than the Suzuki, yet both these bikes need discounts to help shift them, with eBay traders offering brand-new Versys 1000s with all the kit on – panniers, screen, top box – for just over £8,000, with zero percent finance as well. The Suzuki is beginning to follow suit, with tempting packages and discounts available.

In terms of a conclusion, it’s a no-brainer for me; I’d have the Suzuki. I prefer the V-twin over the inline-four. I prefer the 19-inch wheel over the 17-inch, and overall I think the V-strom is more lithe and athletic. But at the same time, Bryn thinks the exact opposite. Who’s right and who’s wrong? Neither of us, just different spokes for different folks. Fair to say though that these 1000 faux-adventure bikes from the Japanese manufacturers are handy bits of kit, offering good value if you hunt around, and, on a day to day basis are more useable than some of the ‘proper’ adventure bikes you might be considering. Food for thought at least.