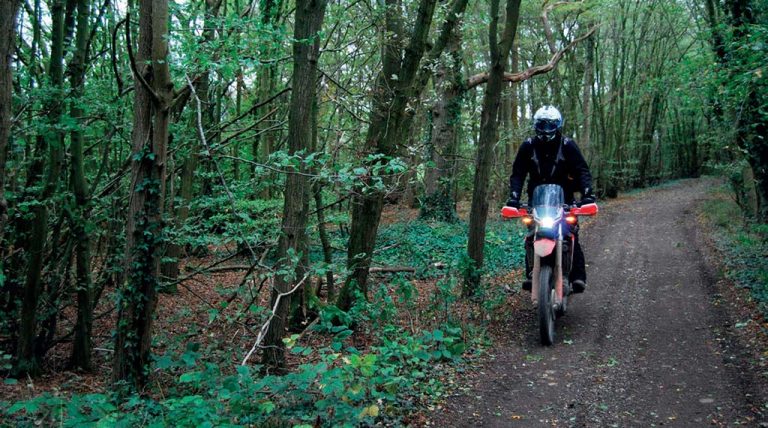 Regular readers of my bi-monthly long-term reports will recall that as the country was gradually emerging from the travel restrictions of spring and summer, I was due to take the CRF450L on a cross-country jaunt from Whitby to Morecambe and back in the russet hued days of late September. A total of 14 of us from the Bristol Trail Riders Fellowship were booked in for the trip which promised epic trail riding and messing about in equal measure.

And then it all went wrong faster than a two-stroke running without premix, the whole plan seizing up with an almost audible wail. The second wave started to gain momentum, the north of the country became a virus hotspot and the Game of Thrones-sounding rule of six came into force. The trip was dead in the water.

So, with some of the guys heading to Wales for a smaller adventure, I decided to use the time to revisit the southern leg of the Trans Euro Trail (TET) with just one other rider, my mate Pat. Less hassle with numbers, less organisation, and crucially, in an area that was relatively low on infections. Jeez, what a criteria to plan a trip!

Preparing the Honda for the journey was relatively easy as I’d not long completed the Great Western Trail, a trip you can read all about on page 47 of this very issue of ABR. The main change that was a priority for this trip would be to swap out the dual sport Dunlop tyres for a set of full-on, road-legal enduro hoops. Although the lanes on the southern TET are the least challenging on the entire route, the prospect of far more mud and sloppy stuff during the trip meant I was happy to stack my options towards off-road competence rather than tarmac busting grip.

A call to the ever-obliging Dave at Dunlop had a set of wonderfully knobbly and purposeful Geomax Enduro hoops arriving chez Challis in a couple of days. Suitably fitted with heavy-duty tubes, they looked ideal for anything from monsoon to desert conditions. And as it turned out we had just about both.

With Pat on his KTM EXC 350 Six Days, our bikes were equally matched for the task and perfect for the trails. The journey passing effortlessly with nothing more serious than a collapsed mousse on the KTM to spoil our fun. We arrived at the somewhat prosaic endpoint of the TET (or start point depending on which direction you ride) at the Port of Dover some 602 miles and four days later. Not even the September drizzle could dampen our spirits. The full story of the trip will be in ABR soon.

Sadly, that was the end of my time with the CRF450L. It has now gone back to Honda headquarters with nothing but good memories. Although I previously thought the KTM 690 Enduro R was perhaps the perfect TET bike, the Honda has proved to be a step beyond that and more. It’s been the ideal bike for my preferred mix of weekend trail riding combined with longer jaunts over multiple days, and if circumstances had been different, the Honda and I would have explored further into Europe. It’s a beautifully well-made and supremely capable off-road bike, and a great lightweight adventure bike too.

The CRF450L is possibly one of the most underrated bikes that Honda has released in recent years. If one comes up at a local dealer, you should jump at the chance because you will bloody love it.