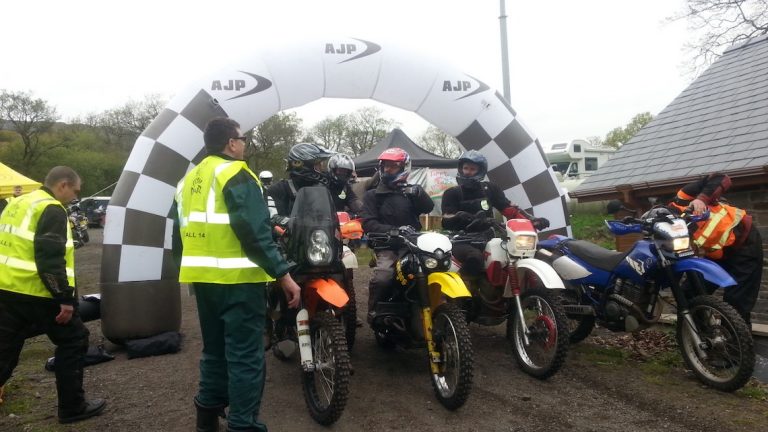 Over the first bank holiday weekend in May, the Western Brecon Beacons and the Black Mountain echoed to the sound of adventure bikes… trail bikes and a couple of hardy c90s, as the second annual Taffy Dakar Motorcycle Orienteering Challenge swung into action.

The first hardy souls began arriving on Wednesday, hell-bent on setting up camp and getting some mud on their tyres in preparation for the festivities ahead. By Friday evening the arrivals were in full flow, with almost 150 mud-pluggers and green lane enthusiasts rocking up for a weekend under canvass, or in rather more luxurious camper vans.

The campsite was at The Ancient Briton, a well-known local hostelry, with all the comforts of home, including hot showers and rather posh toilets, as well as a well-appointed and manicured camping field of an acre or so. Another attraction was the dozen or so real ales they regularly serve up, which the marshalling team duly tested to the extreme over the weekend.

All shapes and sizes of two-wheeled vehicles showed up; everything from pristine GSs to humble C90s and just about everything in between. The stipulation was no enduro bikes, as there are plenty of events specifically for them already. Maps and instructions for the coming day were duly issued, wrist bands and goody bags handed out and still, they came, right up until 1:00 am, when the last hardy souls rocked up.

Saturday dawned a little nippy, but mercifully dry, with little prospect of rain, surely this was a sign from above! Soon the merry band of navigators were mustering around the inflatable race arch, which marked the start (our thanks go to AJP Motorcycles for the loan of this…) and we began the mammoth task of getting the riders underway.

The day consisted of a ‘Treasure Hunt’ around a series of pre-recce’d waypoints, with a question set at each regarding the environs, i.e. ‘what date was this building built’ etc. Many of the map references lay in the middle of green lanes, unadopted county roads or BOATS (Byways Open To All Traffic), which our dedicated team had researched and laid out in an appropriate pattern over the preceding year. A healthy smattering of scenic roads and tiny unclassified tracks peppered the route as well.

By the end of the day (we’d set the return time as 6:30 pm), the rabble had, by and large, returned to the fold, coming in dusty and dirty, but very satisfied with their day’s work. Weary smiles abounded as each team rumbled back into the paddock and handed over their results sheet for marking.

In double-quick time Jason and Christian, the instigators of this fine event had completed the necessary paperwork and were ready to announce the winners. Special guest and multiple Dakar finisher Simon Pavey graciously agreed to hand out the awards, having participated himself during the day, and quite clearly won by a mile (he was disqualified for being famous!).

The Banana Time duo took the honours by a whisker, a special award – the ‘Pembroke’ trophy, named after the legendary figure of Pembroke John, a man who could get lost in his own bathtub, sadly passed now, but fondly remembered by so many – was awarded to Smithy and The Witch, for getting hopelessly lost on the first clue, and being run off the land by an angry farmer.

Sunday slowly got into gear with a series of guided rides mustering in the car-park, the marshals once again going above and beyond with many groups out covering a selection of the lanes they’d either found or not, the previous day. A smattering of longer road only rides were also laid on for the less hardy (and more achy!).

The sun shone all day and everyone chilled, drank, rode and dozed, pretty much to their little hearts’ content, until the groups began returning around mid-afternoon and the drinking began in earnest. The Irish contingent were in full voice right into the wee small hours, ably accompanied by the obligatory Welsh choir that seemingly springs from the wood in any Welsh bar after midnight.

Monday dawned to dead silence as the sleeping hoard regained consciousness, slowly and with great trepidation. Tents began to be folded and packed away and riders trickled back to civilisation in dribs and drabs, still grinning, backs were patted, man hugs were freely given and promises to return again from everyone, and I do mean EVERYONE.

A few stayed on for even more riding, or recovery as necessary, but after clearing up, a hearty meal and totting up the take, (we raised over £1,000 for charity) the remaining hardcore of three buggered off home for a well-earned kip. See you next year for the Taffy Dakar 2015.