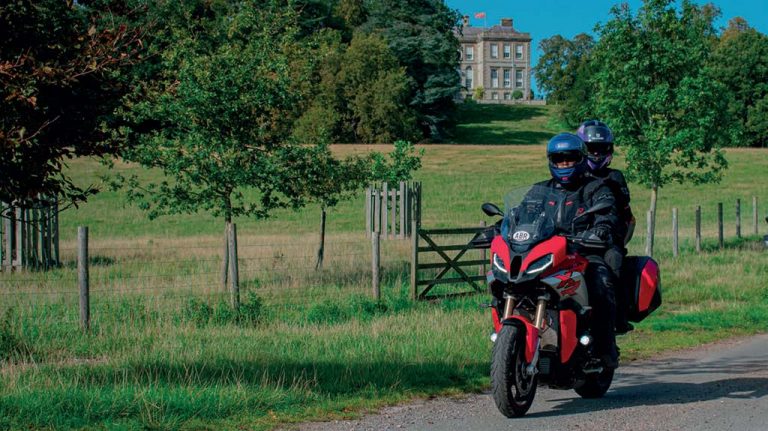 In the last issue of Adventure Bike Rider magazine, I wrote a more comprehensive long-term update than usual, giving my in-depth thoughts on the BMW S 1000 XR and what it has been like to live with.

In that piece, I spoke briefly about the bike’s pillion carrying capabilities and said: “If your bike is a ‘we’ bike rather than a ‘me’ bike, your pillion isn’t going to be too pleased with you. The S 1000 XR will hold a passenger, but there are far more comfortable and secure-feeling perches to sit upon (like a GS)”.

I still stand by what I wrote, but I wanted to touch on that again as I’ve now ridden more miles two-up. Better yet, I’ll let you hear it from the horse’s mouth as I asked my partner, Naomi, what she thought of the pillion experience.

“I liked the S 1000 XR. It wasn’t the most comfortable bike I’ve ridden pillion on, but it was OK,” She told me. “The seat was harder than I would have liked, but the position I was sat in (or the ‘feet, knee, arse triangle’ as Bryn puts it) was good. The pillion seat is higher than on the adventure bikes I’ve been a passenger on before and it was actually a struggle to get on.”

Naomi’s been on plenty of tours with me and has been pillion on most of the big adventure bikes on the market, so she knows what’s good and what’s not.

It was interesting that, when I asked her whether she’d be happy to spend a week on the back of the bike, she said, “yes, but I’d need to stay in a hotel rather than camp after spending all day on that seat.” Truth be told, that’s how I feel as a rider of the bike as well.

One of the most influential factors in Naomi’s comfort was the padded backrest provided by the top box. Without this, her answer to the above question would be very different. This brings me nicely onto the bike’s luggage system.

That being said, it’s some of the most hassle-free luggage I’ve had the pleasure of using. The locks are matched to the bike’s key and mounting and dismounting is as easy as pulling a lever and grabbing the suitcase-style handle. Just what you want when you’re heading into your hotel after a long day on the road.

It’s also great that both panniers (30l in size each) and the top box (also 30l) will happily hold a helmet each (unless it has a peak) which is great for when you’re riding solo and two-up.

It’s also worth me mentioning that the bike’s mannerisms and handling remain faultless even when loaded up. This is largely down to BMW’s excellent Dynamic ESA (electronic suspension), which is constantly adjusting the suspension damping to best cope with the varying conditions you’re riding over and through.

With all this said, perhaps I’ll revise my opening statement slightly to: “The BMW S 1000 XR is definitely still a ‘me’ bike, but it carries a pillion effortlessly”.

Yes, there are far more comfortable and accessible perches for a passenger to sit upon, but if your better half can put up with a few aches, is happy to experience the thrill of a high-performance bike, and is nimble enough to climb onto the seat, two of you can tour happily. Just make sure you get the top box.