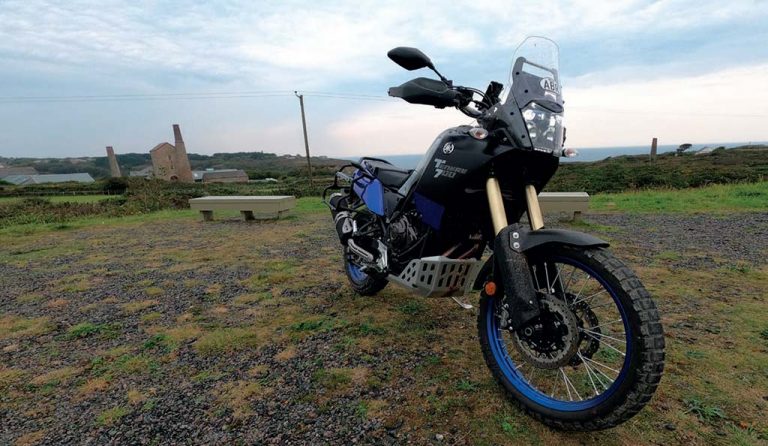 During the making of this issue of ABR, Founder and Publisher Alun had a minor off while greenlaning on his long-term review bike, the Ténéré 700. A twisted leg meant a short break from motorcycling was in order, which gave me the opportunity to take temporary custody of his Ténéré.

I know Alun had been enjoying the bike and I’d also heard countless glowing reports from a good mate of mine who has put more than 10,000 miles on his own Ténéré 700 in the past year. In fact, he’s become somewhat evangelical about it and assures me it more than lives up to the excitement that surrounded the bike’s launch last year. So, to say I was excited as Alun wheeled the Ténéré out of his garage one Friday after work and handed me the keys would be an understatement.

Ahead of me was a weekend of mixed riding including a motorway commute, a selection of twisty country roads, along with a few green lanes thrown in for good measure. Leaving Alun behind, I rode through the suburban streets of Stratford upon Avon and I immediately understood what all the fuss was about. For a motorcycle that looks like a big trail bike, it feels incredibly poised and well balanced on the road. I couldn’t help but sport a big smile as I darted in and out of the queues of rush hour traffic and then swept along A-roads, before joining the motorway as I rode my usual weekend commute from the Midlands to Cornwall.

For a brief period I was smitten, but four hours and 250 miles on the motorway later, the gloss had worn off. In fact, I arrived home a broken man. The Ténéré’s small screen had exposed me to the elements and the resulting buffeting had battered me into submission. The weak headlights also caused my eyes constant strain in the dark as I searched the road ahead for hazards, and the ergonomics caused me so much back pain, I almost collapsed into a crumpled heap as I levered myself off the bike at the end of my journey.

However, it’s said that everything seems better after a good night’s sleep, so the next morning I set off to give the Ténéré another chance. I launched the bike into a series of country lanes and it responded with agile and flickable glee. The bike felt perfectly at home between 50-60mph darting along the narrow Cornish roads bordered by tall hedgerows. In fact, I was having so much fun I wondered if my experiences the previous the night had all been just been a bad dream.

The bike proved even more enjoyable as I barrelled down a few green lanes, its poise and balance transferring from road to dirt seamlessly. However, as I upped the speed, I was surprised to find the front wheel rather skittish when I hit larger rocks on the trails, and I managed to bottom out the suspension at around 30mph a couple of times while riding over some relatively shallow lumps and bumps. Despite this, I was impressed with how the Ténéré performed during my morning on a few trails, particularly on slower, tighter sections where that poise and balance I mentioned earlier were sublime.

So, my first weekend with the Ténéré 700 was one of mixed riding and mixed feelings. The highs of whipping along country roads and playing on green lanes were tempered by the lows of an uncomfortable motorway slog. It all made me think the Ténéré is a bike best enjoyed at a more sedate pace because, at slower speeds, it really is rather good.