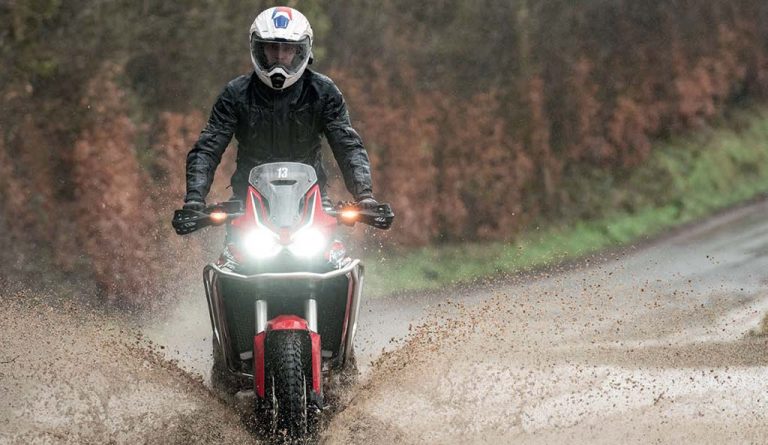 Anyone I’ve spoken to about the Honda Africa Twin Adventure Sports of late wouldn’t need to be a codebreaker working out of Bletchley Park to deduce that I’ve taken a liking to Honda’s formidable adventure bike. It’s agile and responsive in the twisties, comfortable over long distances, and confidence-inspiring on green lanes.

So, it was with some sadness that I said farewell to the motorcycle for a few days after dropping it off with Honda in Corby for an 8,000-mile service. Usually, the sight of the bike disappearing behind the workshop doors would have made my bottom lip wobble, but any loss I was feeling was tempered by the fact the good folks at Honda had agreed to lend me a standard Africa Twin model in the interim.

I couldn’t wait to discover the differences between the two bikes. On paper, they don’t seem too stark, although the standard Africa Twin, with a smaller tank capacity of 18.8l (compared to the 24.8l tank on the Adventure Sports), has a kerb weight of 226kg, while the larger bike is slightly bulkier at 238kg,

While I’ve never considered the Adventure Sports overly heavy, I quickly noticed that the standard Africa Twin was more flickable in the turns, while the acceleration and braking also benefit from that lower weight. All this results in a bike that is more fun to ride and I felt myself throwing into turns more aggressively than I would have done so on the larger machine.

However, despite the base model edging ahead in the twisties, the Adventure Sports emerged as my favourite on A-roads and motorways where that extra weight helps it remain more planted and less deterred by crosswinds than the smaller bike.

It was on the motorway that a more pressing issue with the base Africa Twin became evident too: its stubby screen.

I assume Honda equipped the bike with a small screen to make it more off-road focused (a taller screen can obscure your view of the trail ahead), but a large capacity adventure bike needs to perform on the road first and foremost, and the lack of wind protection on the base model left me seriously fatigued after a two-hour motorway blast.

It was all the more frustrating knowing the excellent screen on the Adventure Sports model could have easily been bolted onto the bike I was riding.

When it comes to greenlaning, both Africa Twins are very capable machines, and while I always enjoy riding the Adventure Sports on the trails, the standard bike did feel lighter and more agile off-road.

It would certainly be my choice of Africa Twin if I was planning to spend plenty of time away from the tarmac.

After a week of riding the standard bike, I returned to Corby to swap it back for the Adventure Sports, and on the way over, I pondered which one I would buy.

If I was commuting in the city, or regularly riding off-road, I’d lean towards the lighter, nimbler base model.

However, the majority of the 8,000 miles I’ve ridden on the Adventure Sports have been on motorways and A-roads, and it’s in this arena the bigger bike excels.

So, despite having a blast on the base model, I was happy to leave Corby with the motorcycle I would choose if my own money was on the line. Here’s to the next 8,000 miles.