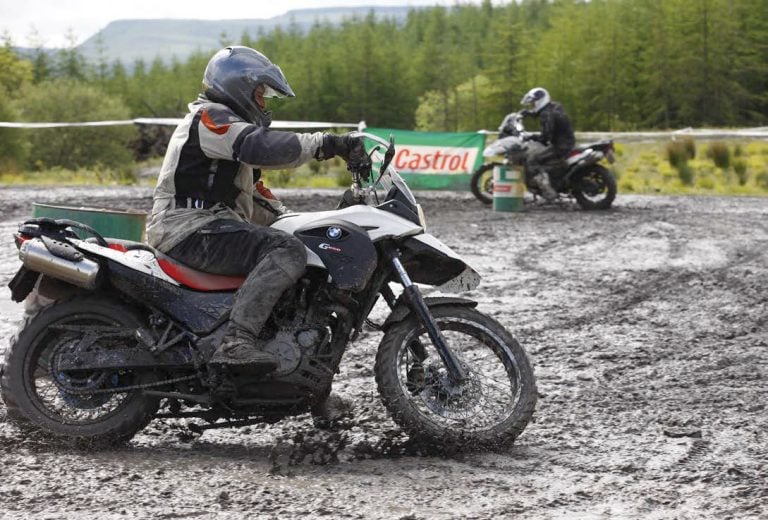 Speedway on 650s, the intention to catch the other man

With no hope of winning, we went along to the UK leg of BMW’s international competition, the three winners heading to Canada for the final…

The GS Trophy is an international competition for all of BMW’s key markets around the world to enter. Each country has its own qualifying heat, with the three best riders from each going through to the final in Canada later in the year, competing against teams from all around the world.

The competition is open to anyone owning a BMW and comes around every two years, which means it’s a bit of a wait until the next one. But it’s an event certainly worth waiting for, as we discovered when tagging along for the UK qualifying round over at Walter’s Arena in Wales.

In total there were around 80 entrants, all paying a subsidised £100 for a two-day event, including camping, some food and full use of Si Pavey’s Off-Road School bikes for the duration of the competition. The format was to spend the first day of the competition whittling the 80 entrants down to 20, who would then go through to the next day’s decider to pick the top three of the bunch. A real mixture of riders were present, with some clearly more competent off-road than others, some with trials and enduro backgrounds, but with no professional riders allowed to enter.

This road based orienteering challenge then had riders following pace notes, having to find clues and answer questions, such as how many arches were on the viaduct you passed beneath, or what was the number painted on the petrol tank of the wooden motorbike outside a house in a village you rode through. Then at times, you would stop for challenges, such as a cycle challenge, having to complete a loop of a circuit in the quickest time, or going down a pot-hole to find a clue at the end of a long black tunnel. All good fun.

But of course, it was the off-road stuff we, and everyone else was interested in. Three bikes were used; the 650 Sertao, the F800 and the R1200 GS. There was a tight trials section to be completed on the Sertao, with points deducted for feet down, a climb up a wet slippery channel with on the 800, a rough shot ride through a narrow tree-lined canyon on a 1200, one-handed slow speed skill testing, again on the 650, then finally, six laps around the enduro track on a R1200 GS, complete with well-scrubbed in Karoo 3s; hardly what you’d call proper knobblies for such conditions. You had three attempts at each of the sections, except for the enduro, which you only had one crack at.

In truth, this last challenge was the best one. It had been raining all day, the other competitors had already churned up the course, and then you’re there on the 240kgs GS doing your best to slide it around like a scrambler, which was far more fun – and more manageable than it sounds; the dash lighting up with all sorts of warning signs, and the ABS going weak at the knees every time you go hard into a corner.

Again, you can’t help but be impressed at how well these bikes survive the numerous crashes. They were crashed into trees, dropped onto rocks, wheeled off various drops, and they still kept on going, though obviously you’d be less keen doing it to your own machine.

Results were given later that evening back at the Ancient Briton pub and campsite, with the top twenty point-scoring riders progressing to the next day’s competition, which in great spirits was watched over by most of those that hadn’t made it through from the first day.

The challenges were variations of the previous days, with the trial’s section on the 650 done in reverse, the 800 up the gully modified to include a sharp ride up a bank, with a R1200 GS being used for this instead, leaving the 800 to be employed on a nigh on impossible section through a bank of trees, with deep channels beneath them.

Even the instructors couldn’t clear it ‘clean’. The enduro course was sadly absent, with it replaced by a wacky two-bike race around two barrels, with the challenge being to catch the other man. Like greyhound racing on 650 Sertaos.

The best eight riders were finally announced, with a final decider back at the campsite. Here the organisers had set up a technical trials section, complete with pallets to ride up and over and railway sleepers to cross. The bike of choice was the F800, though it was often heard to be said how most preferred the 1200, mainly for the slow speed balance and ‘chug’ of the engine.

Few had good things to say about the Sertao. Some nasty falls ensued on this challenge, with the stack of pallets sending a few bikes, and their riders upside down. It really did separate the wheat from the chaff.

As one final challenge, all eight riders had to perform a tight figure of eight on the 1200, with the competitors weary but still all up for winning a ticket to the final in Canada this September. A massive congratulations to Marcus Arrowsmith, Jon Crockett and John Small; the guys three who made it through.