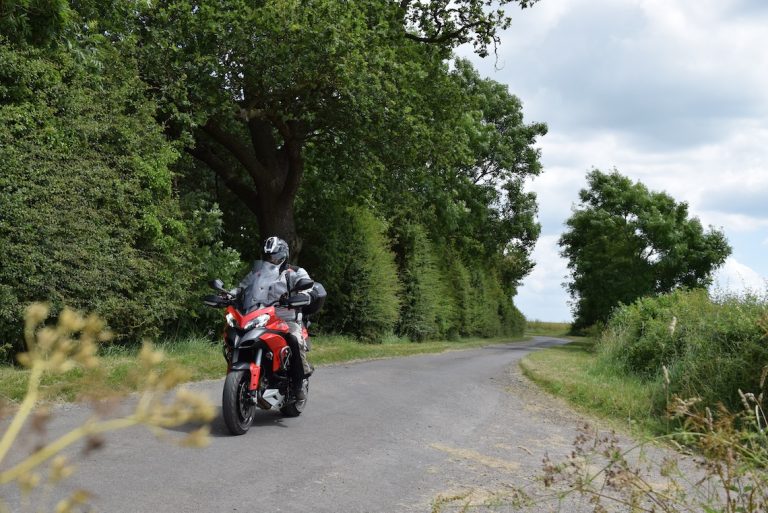 The Ferrari of adventure bikes

I’ve always been of the view that the perfect adventure bike is the one I’m riding right now. It was never essential that a bike had to come with metal panniers, multiple auxiliary points and an extended beak for a tour amongst the great unwashed. The only requirements for getting out there were, and still are; the desire, opportunity and enough cash for petrol and fags.

So, in my view, the current crop of adventure bikes are of a comfort and style that best suits the ageing demographic of the motorcycling community rather than possessing inbuilt ability to take you where no other earthy being has pitched up under the stars. In short, we’re all getting that little too old and ring rusty to squeeze into a leather ‘onesie’, and just the thought of contorting this ageing frame into sports bike mode is enough to have me reaching for the bedpan.

Up close and it’s the detailing on the Ducati that really impresses. The effort and thought that’s gone into it, let alone the craftsmanship in making the parts. It’s the kind of quality that makes a bike worth treasuring.

But don’t get me wrong, I’m no air-cooled Luddite pining for the simplicity of technology of old. Far from it, the most used feature on my GSA is the on-the-move adjustable suspension button and if truth be told I’d go for a bike with a plumbed in pannier mounted cappuccino machine rather than a fold-out tarp. What’s more, I still, very occasionally, miss the breathtaking rush of sports bike performance.

With all that in mind, I was pretty excited to be getting the opportunity to ride the latest version of the Ducati Multistrada S Granturismo, which on paper looked to be only one step technologically removed from offering digital espresso on tap and arm wrenching performance to boot. 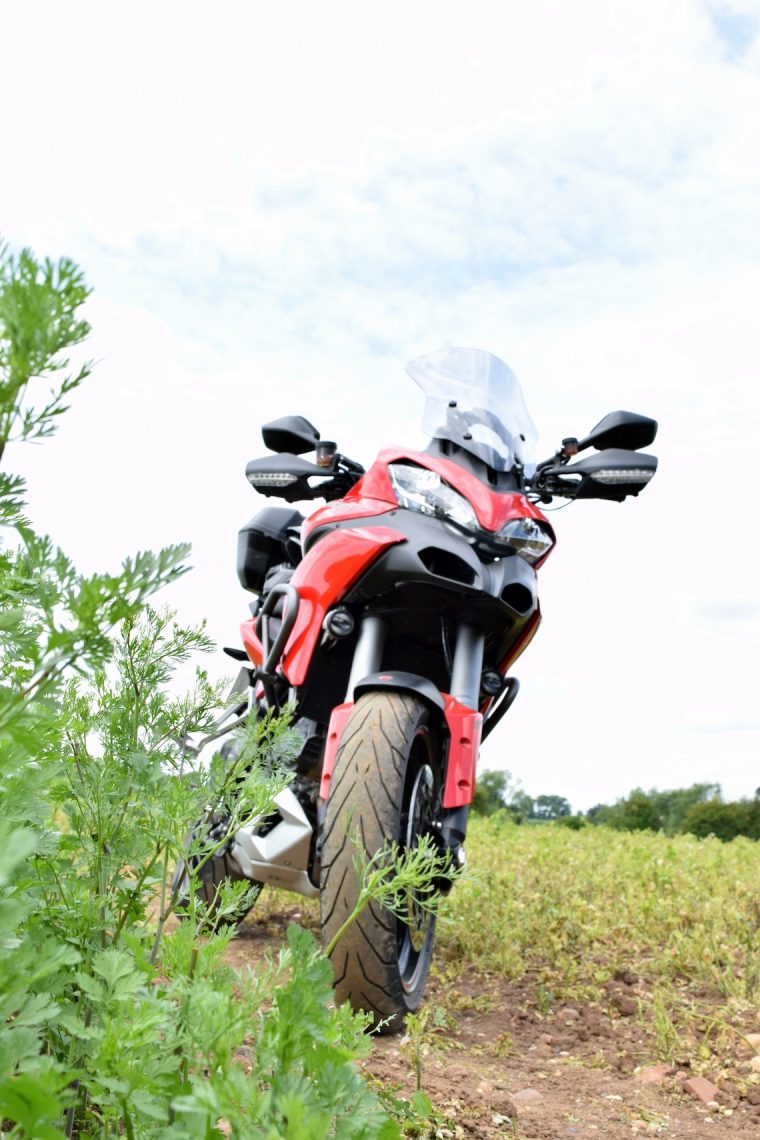 From the off, I have to admit that I fell for the Italian panache of the Ducati. In the first couple of hours, I spent more time admiring the engineering and design than I did riding the machine. Opinions are divided on the overall look of the bike, but get up close and it’s apparent that just about every component has been lovingly designed and blended rather than grabbed out of a ‘that’ll do’ parts bin. The mudguards, nuts, bolts, seat, tank, graphics; they all provide an impression of being sweated over in the design studio and crafted to fit by a time-served engineer at his workbench. Superbo.

The Multistrada is currently the front runner in the motorcycle technology race; switchable engine modes (Sport, Touring, Urban and Enduro), adjustable ABS and traction control are par for the adventure course these days but not so the ‘Skyhook’ semi-active suspension.

The technology behind the ‘Skyhook’ is not new having been used in the automotive industry for many years, but shoehorning the system into a two-wheeled vehicle is a first for Ducati.

We’ll be looking in more detail at the system in future long term tests, but the essence of the system is to keep the body of the bike moving parallel to the sky at all times by continually altering the front and rear damping dependent on conditions.

It does this via bike-mounted sensors and comparing settings such as speed, acceleration, throttle position, ABS and traction control. An onboard algorithm analyses the info and is capable of automatically switching from maximum to minimum damping in 10 milliseconds – that’s a hundredth of a second. If you think of no back squatting under acceleration and no front dive when braking you’ll be able to perceive the first piece of the skyhook jigsaw.

The Multistrada comes with the sort of keyless ignition you get with expensive cars. As long as the ‘key’ is on your person the bike is activated by a simple slide and press of the ignition button. Fancy, eh? But you still have to dig the key out for the fuel tank, panniers and top box so it’s only a partial fancy ‘keyless’ experience.

Even without the owners manual, I found altering the engine modes easy to figure out. Trying to work out how to lock the steering was another matter and as I type this I’ve still no idea, though I’m sure a quick check in the manual would provide the answer.

Throwing a leg over the Ducati I found the ergonomics spot-on for my 6ft 2in frame. A perfect bar, seat, peg ratio and I could get both feet down with a little to spare.

From the off in ‘sports’ mode you just know you’re in for a fruity ride and I must admit to being surprised on my regular run from the office just how quick this bike moves and how effortlessly it does it.

Unlike the KTM 1190 Adventure which smacks you in the back at around 3,000rpm, the Ducati comes with a hand permanently pushing between the shoulder blades from low through mid and up into high revs.

Make no mistake, this 150bhp machine is very, very quick which the upright, comfy riding position does its best to mask. Do not be surprised when you find yourself riding well-known roads at 20 or 30 mph faster than you normally would.

Flicking through the engine modes there was a notable difference between the various setups, though I have to say that the 100bhp of the Urban and Enduro modes felt a little boring after the electrifying performance of the Sports setting.

However, the most scary feature of the Ducati is not the ultra-quick performance, but the fact that if I’d taken one out on a test ride I’m pretty sure I’d have bought it. And at £16,995, that is scary. I liked it that much. It’ll be interesting to see if I still feel like this over time perhaps the novelty of the performance will wear off. We’ll see.