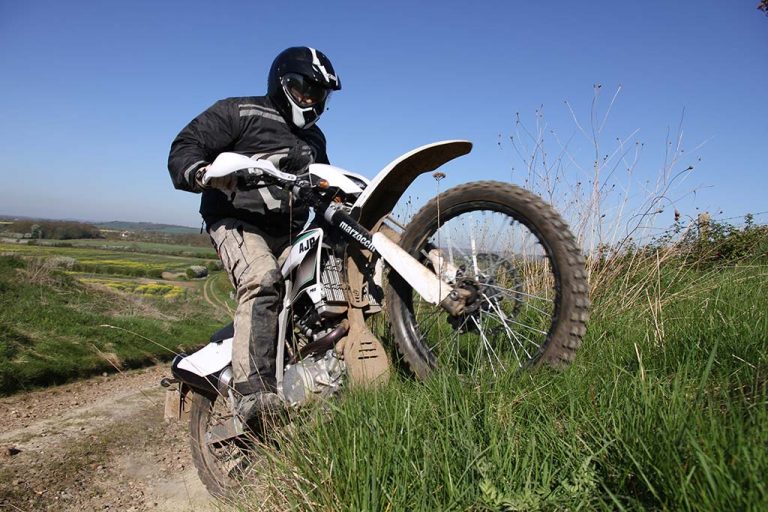 I’m really starting to warm to the AJP PS5 Trail. After a slightly inauspicious start to the relationship brought on by some sloppy finishing in the wiring department, I’m beginning to appreciate and, dare I say it, admire the lightweight Portuguese machine for its many strong points.

At a guess, I doubt that anyone is going to buy the PS5 as their one and only motorcycle. I see it more as a second bike bought for the specific purpose of trail riding with the mates. That’s not to say that having bought the bike it’ll be restricted to green lane use.

The understated charm of a 250cc powered motorcycle has a habit of creeping up on riders who find themselves using a smaller bike for popping here and there in a way they would not countenance on a larger, heavier and bulkier machine due to the perceived level of faffing involved.

There also comes a point where you start thinking that maybe leaving the van in the drive and setting off on a long-distance ride with some trail riding thrown in sounds like an enjoyable idea. More about that in the next issue of ABR where I’ll let you know what it’s like to take the AJP on a 300-mile day trip to Mid Wales taking in some of the best green lanes along the way.

For now, let’s just stick to its trail riding credentials. I’ve no doubt that for anyone who’s a complete novice or at the point where they’re questioning their stress, intellectual and mortality levels when taking a big adventure bike off-road that the PS5 is going to bring an immediate sense of relief and enjoyment when venturing off tarmac. You’ll immediately understand the ‘less is best’ mantra of more experienced riders when it comes to weight.

At 115kg the AJP will feel more like a mountain bike if you’re used to navigating rutted lanes on a 200kg plus adventure bike. The excellent slow-speed manoeuvrability, balance and stability will have you attempting obstacles and climbs you’d have considered life-threatening on a larger machine.

And if you do have a spill you’ll be able to lift the PS5 off the ground solo with no fear of slipping that disc.

Take a BMW 1200GS off-road, or even a Yamaha 660 Ténéré or Suzuki DRZ 400 for that matter and most people will find that they’ll only be using a fraction of the engine capacity. With the AJP 250, you’ll find yourself using far more of the engine in a way that’ll make it feel like you’re only a few steps away from a Dakar podium finish. In short, you’ll have far more fun and enjoyment on a PS5 Trail and that’s the essence of why I go trail riding.

I’ve also a few issues with the PS5. For starters, the petrol filling cap (positioned smack, bang in the middle of the rear section of the seat) appears to have been tailor-made for causing maximum damage to any further breeding aspirations I may have. Trying to adjust the rear shock is only for riders willing to start stripping the bike apart and it’s also a little louder than I’d like for an environmentally conscious trail ride. As for the spring on the kickstand, it may as well not be there.

If you’re going to buy an AJP PS5 get the dealer to set up the rear suspension at the point of delivery and make sure your hereditary line is complete before taking to the hills.