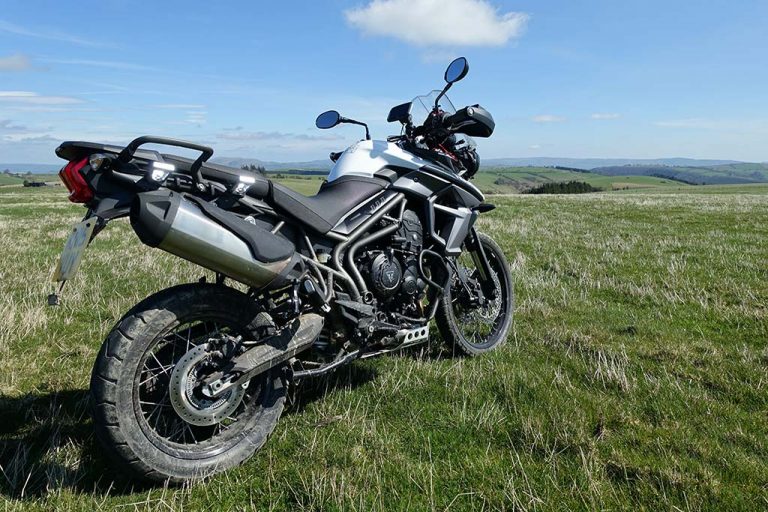 It’s not the features of a motorcycle that make biking such an enjoyable pastime, but when it comes to the Tiger 800 XCx they certainly help. Alun Davies shares his thoughts on the latest addition to the ABR fleet

Triumph Tigers’ and Adventure Bike Rider have a shared history. ­ The magazine was conceived from the saddle of an original Hinckley ‘Steamer’, better known as the Tiger 885. I was so impressed with the 885, in particular with the performance of the Triumph triple-cylinder engine, that I went on to buy the far slicker but ferociously ugly Tiger 955i.

If you can live with the bike’s looks, in my opinion, it’s one of the most underestimated adventure bikes ever built. Anyway, the 955 has been sold, but the old Steamer still holds a spot in the ABR garage and I suspect it always will. It comes out to play every now and again, most recently when I decided to compare how far Triumph has progressed over the past 22 years.

In short, other than the Tiger moniker, the 2015 XCx has nothing in common with the original 885, except possessing a magnificent triple-cylinder engine. Where the Steamer was distinctly agricultural and had the appearance of being made out of girders the XCx is silky smooth and constructed with lighter and more modern components and materials.

The power delivery, gear change, clutch, brakes, handling and comfort of the XCx are all highly polished and light years ahead of the 885. And then there’s the advancements in electronics with the modern Tiger possessing ride by wire, different power modes, traction control, ABS and enough rider information to satisfy your boredom for hours.

But when all’s said and done, in the long run, having all the gear counts for nothing. What matters are the recollections of where you’ve been, what you’ve done and who you’ve met on the roads you’ve ridden. ­ Those memories contain the eternal grey-matter sparks that’ll have you reminiscing with a glint in your eyes for many years to come.

In 20 year’s time I’ll not recall the times when I changed from ‘Rain’ to ‘Sports’ mode or the first time I clicked cruise control on the M40, but I’m certain I’ll be telling any young descendants who’ll listen to their old man when he speaks of the time when him and his mates rode that breathtaking single-track trail in the Dolomites. Or when he first laid eyes on the spectacular Mosul Valley in Germany or gazed in awe at the 14 mile long Aletsch Glacier in Switzerland or rode the outrageously contorted Splungenpass into Italy. All of this was done from the saddle of a rustic old Steamer.

I found myself dwelling on the subject that it’s not the features of a motorcycle that make biking such a wonderful pastime with the notable exception of heated grips as I kicked down the side stand of the XCx. ­e sun was shining, the sky was that perfectly clear, deep blue and the lifeblood of spring was in green evidence as far as the eye could see.

I was parked atop a hill, alongside a green lane I’d been following, not sure if I was in Shropshire or Mid Wales, not that it mattered. Other than the Tiger and myself, there was nothing else in sight, and the view was extensive. Buzzards eyed me from the highest branches of nearby trees, mountain flowers were in picturesque bloom and the world was a wonderful place to be. I really don’t know how lucky I am that the XCx comes with an off-road riding mode.