What’s The Deal With The KTM 1050 Adventure? 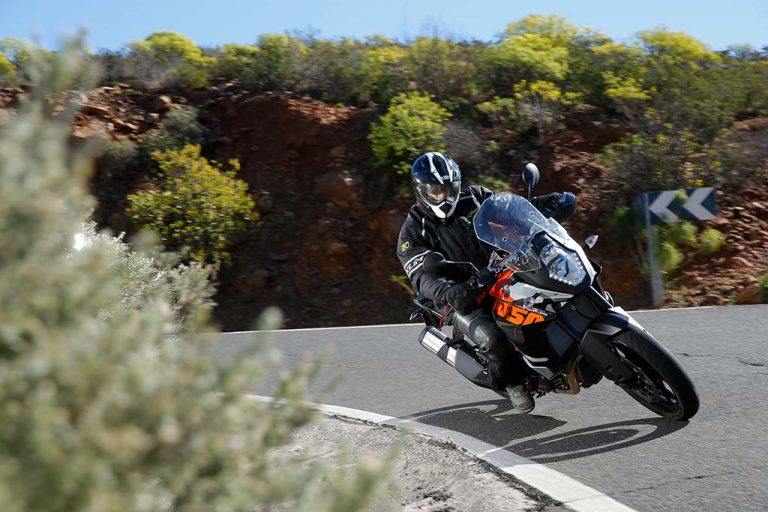 It may only have 95bhp but KTM’s New A2 Licence friendly 1050 Adventure is agile, well-specified and as fast out of the blocks as its bigger brothers, but why should you buy One?

At the recent press launch in Gran Canaria where KTM launched its superb 1290 Super Adventure the world’s press had an additional ride out on a second new machine which was, it has to be said, slightly overshadowed by the groundbreaking 1290.

On first thought, the new KTM 1050 Adventure is a bit of a strange one. Considering that the company already offers two versions of its existing and excellent 1190 Adventure plus there’s now the mighty 1290 to consider, that makes four adventure models within a confined spread of 240cc’s. So, what exactly is the point of the 1050 and why would you want to buy one in preference to, say, the 1190?

KTM, presumably thinking long and hard about this, has chosen to market the 1050 as the entry-level model into the firms travel enduro range. The two main hooks are the lower price when compared to the bigger models and the restricted power making the bike A2 licence friendly and more appealing to inexperienced riders who covert the KTM logo but don’t see the need for a 148 or 160bhp rocket ship.

Also, with more customers taking advantage of buying new bikes on finance plans the cash saving of £3,000 over the 1190 doesn’t have quite the same knockout punch when the 1190 is only approximately £16 extra per week on finance (or approx £70 extra per month).

In short, the 1050 has to make you go weak at the knees and the desire for a lower-powered machine embossed with KTM has to be above all others to justify the purchase price. On the other hand, you might just be a rider who recognizes that anything over 95bhp is wasted on UK roads. Anyway, if you think I’m inferring the 1050 is lacking in some department then let me dispel those thoughts right now.

The 1050 Adventure is as torquey as the 1190 up to 6,000rpm which means it’s a very quick bike out of the starting blocks and cruises comfortably at above legal motorway speeds. It’s nimble and agile, smaller, lower and lighter than its bigger siblings and it comes with ABS, Traction Control, ride by wire and four rider modes Sport, Street, Rain and Off-Road.

The 1050 also shares the same chassis, engine, dash, headlights plus a great deal of the electronic wizardry found on the 1190 and 1290 which may suggest that it looks similar. That’s not the case, the 1050 has its own distinctive style and appears visually smaller and is indeed lighter than the other adventure models.

Out on the test ride, I found the adjustable screen to be okay but nowhere near as effective as that on the 1290. I’ve no complaints with the seat, bar and footpeg ergonomics which proved to be very comfortable with the exception of the seat becoming a little hot after extended use – this is an irritation common on all of the new KTM Adventures where heat generated by the aft cylinder and exhaust needs to be dissipated more effectively.

With the bars and pegs adjustable and the seat, 100mm lower at 850mm, onboard comfort will be within reach of most riders.

What grabbed me initially about the 1050 was that the restricted engine felt as strong as both the 1190 and 1290. It really does blast away at such a rapid rate of knots that I started to wonder if the 95bhp was some sort of marketing tick box exercise rather than on-road reality. It’s only when the tacho approaches 6,000rpm that the downsized LC8 engine starts running out of puff leaving the full bore models to boost off into berserker-land.

That said, the performance of the 1050 is nothing to be sniffed at, the 79ft/lb torque is class-leading and on the narrow twisty roads of Gran Canaria, there was more than enough excitement to be had by all levels of rider. Work the gears and ride the low down torque is the name of the game here and in all honesty, there’s more than enough power for most all situations

The handling is impressive, not once did the long travel WP front and rear shocks concern me on fast, smooth tarmac or slower bumpy roads and the ABS and Traction Control are just as I like them, unobtrusive and effective.

In summary, the 1050 is a good looking bike with that angular KTM appeal. The handling makes it a very easy bike to ride and the 95bhp restriction will be welcomed by A2 licence holders and surely appeal to riders who recognise that anything more is wasted on UK roads.