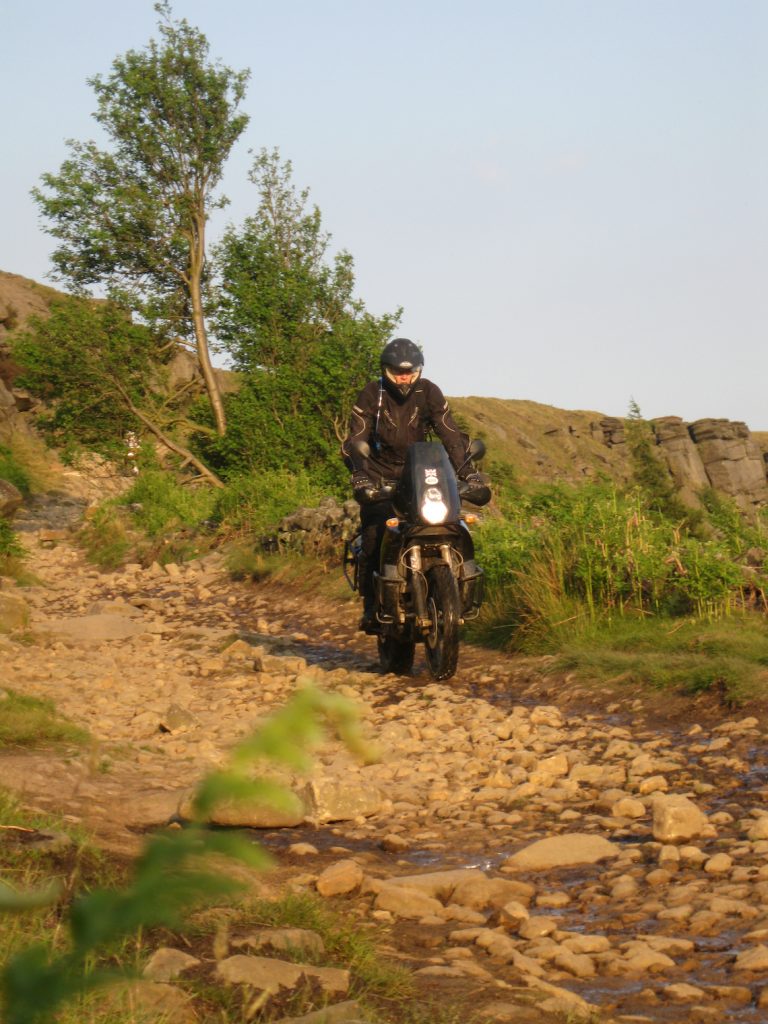 Get the most out of your adventure bike at home

In the first of a new series, avid green-laner Mike Beddows checks out routes in the Peak District and West Yorkshire

Mike Beddows, 35, is from Runcorn, but he’s a Yorkshireman at heart. He likes trail riding and wild camping and dislikes tarmac. This year, Mike’s planning to trail ride across England from coast to coast. He also dreams of circumnavigating Australia with his wife, once the kids have all grown up

The trails are located in the South Pennines, on the border between the High Peak District of Derbyshire and the West Yorkshire district of Kirklees, just inside the boundary of the Peak District National Park.

The highest point in the area is where Holme Moss transmitting station is locat- ed and this offers fantastic views over the surrounding countryside. The base of the station is 524m above sea level and the mast another 228m on top of that. This gives a maximum aerial height of 752m, making it one of the tallest transmitting stations in the UK.

The route starts at the car park at the top of Holme Moss (A6024). Here you’ll get a great view of the trail running alongside Yateholme Reservoir below. The Green Lane begins 1 mile below the summit car park.

2a-3 This section is a downhill, slightly rutted 4WD track. There are some ruts and a few stones, but this shouldn’t worry the more adventurous novices. As a precaution, stop at the entrance to this section and walk down the trail roughly 150 meters. If it doesn’t appeal, move onto the access at 2b.

2b-3 From here to point 4, this section is as basic as a trail can get and a great introduction to this sort of riding. Further down there is evidence of logging activities and this hard-packed trail is used as an access road to remove the felled trees

3-4 The trail continues and winds through Holme Wood. It then proceeds along the bottom of Yateholme Reservoir. After any rainfall, there are many puddles on this section. They’re not deep and have a solid base. At the end of the reservoir the trail continues downhill and to the right. You’ll now cross over the dam wall of Riding Wood Reservoir with a view of Ramsden Reservoir below on the left. Proceed around a sharp left-hand bend. The house on the left is where the beginners’ trail ends; continue straight on until you reach tarmac. If you’re a competent trail rider, turn right at the house (difficulty rating 3)

4-5 There is evidence of heavy use by 4WD vehicles all the way up this trail. The route veers round to the left and proceeds up- hill through a wooded area. Stay on track as you scramble up the loose surface to the next right-hand bend. Once round the bend there are a lot of rocks to bounce over while picking the best route up. Before the next left turn it’s advisable to stop and view the trail around the bend.

5-6 Take a look at the trail and pick the best route to get your bike around the bend. There is a large channel where rain water and 4WD vehicles have eroded the ground. About another 150 meters up the trail the route becomes very rutted, again heavy 4WD activity and rain water flowing down the centre channel. The best route is straight up the middle of the channel. Be prepared to bounce around. Try not to stop as it’s difficult to gain momentum again.

6-7 The trail is straightforward from here on. The small rocks that litter the trail can cause the front wheel to slip around, but if you’ve got this far without incident this won’t prove a problem. At the end, turn around and do the route in reverse.

Stanage Edge is a gritstone escarpment in the Peak District and is located on the moors north of Hathersage, Derbyshire. It stretches for approximately 3.5 miles and is crossed roughly mid-point by the Long Causeway, the old Roman road that stretches from Brough (home to the Roman fort of Navio) to Templeborough, near Rotherham. Its highest point is High Nebb at 458m.

Stanage Edge is heavily used by trail bikes, 4x4s, mountain bikers, walkers, and rock climbers. It’s a hard ascent/decent and is advised for experienced riders. It’s still worth visiting even if you don’t plan on riding the entire route, though. The scenery is fantastic and it’s a great experience to sit down and watch the numerous motorbikes and 4x4s trying to negotiate the trail, which is always busy on the weekends.

On the steepest part of the trail, it’s very narrow and the terrain is extremely rocky; there’s a high possibility of damage to your bike (and yourself ) if you’re not a proficient rider. I know of a recent instance on this route of a rock penetrating an Africa Twin’s bash plate, causing damage to the engine casing. Be warned. Although it’s not publicised on the ground, Stanage Edge currently operates a voluntary restraint for one-way traffic only, east-west (downhill).

1-2 Starting at the Redmires Reservoir the trail runs alongside a wooded plantation to the right. It has been graded and provides no problem; this section is suitable for novice riders

2-3 Approaching the gate the terrain becomes harder and rockier. Past the gate the remains of the old Packhorse Road (rock slabs, a horse-cart width apart) can be seen and ridden on. Take care as these rock slabs can become slippy in the wet. Again, this section is suitable for novice riders if ridden at a steady pace

3 This is the highest point on the route and the location of Stanedge Pole (note spelling: Stanedge and Stanage are different), a medieval way marker that can be seen from miles around

3-4 The route continues through open moorland. It can be very bleak on a windy, wet day. The rock slabs cease and the route turns into a 4WD track. Take care if you’re in the right-hand rut approaching point 4 on the map. There’s a small puddle that’s very deep and catches riders unaware as they lose the front end. Great fun, just keep an eye out for it

4-5 As the trail veers to the right novice riders should stop, and anyone wishing to scout the route ahead should stop here also and proceed on foot. This is where the trail becomes difficult. The trail is extremely rocky and riders should be prepared to bounce around while trying to pick a suitable route down. The easiest route is to the left of the track, but this also requires nerves of steel as the drop to the left is considerable. Be careful if there are walkers on the path, it’s very easy to lose control of a bike here and walkers won’t always move out of your way

5-6 The hardest part is now over. The trail has been graded from here down, but be careful: the marble-sized stones can easily cause your front wheel to wash away

6 Now, for the brave, turn around and do it all in reverse!

Packhorses were the primary method of transporting goods around England up until the 18th century, when turnpike roads and canals were introduced. Away from main routes, packhorses were used well into the 19th century. The system of paths established and followed by these horses across wilderness areas became known as Packhorse Roads. Such a road is still visible between sections 2 and 4 on the map 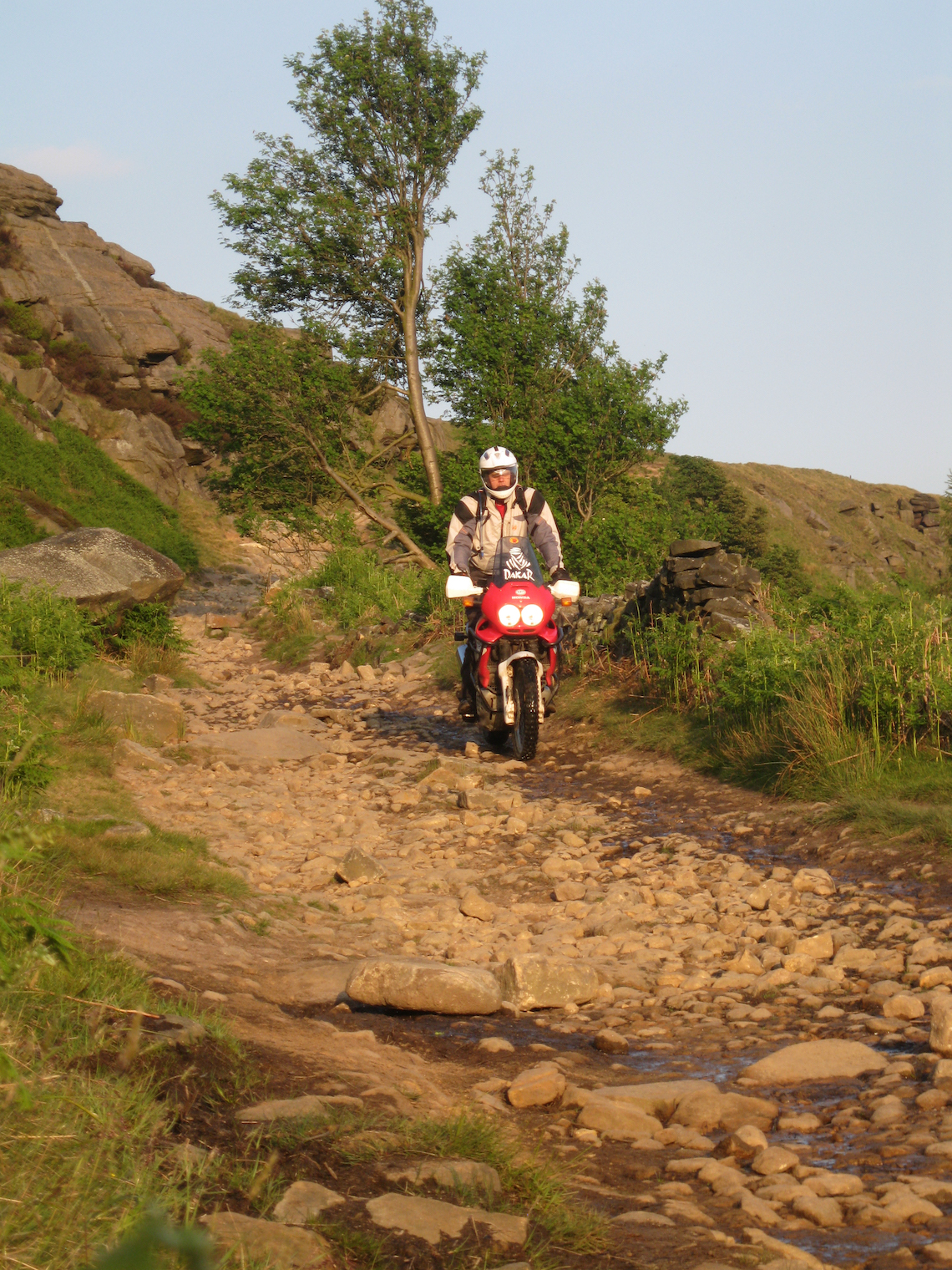