Cardiff to Italy on an XT660X 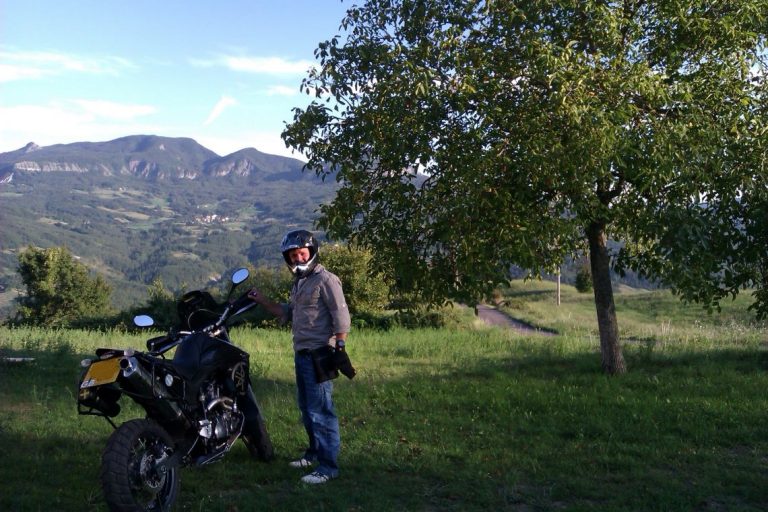 Ten years after passing his bike test, ABR reader Daniel Sidoli finally gets the chance to make his dream trip come true: Cardiff to Italy on an XT660X

I knew all along where I wanted to go for my big Europe trip: the family home in Northern Italy. It’s a stunning place with a mix of forest tracks and winding mountain roads. I’ve always liked driving in the area and knew it would be a great place to have a bike.

Before my departure I decided to spend a little cash tarting the work horse up so it could handle a little off-road action along with the twisties and motorways. After adding some Avon Distanzias, a TT alloy sump guard, Barkbuster hand guards, a tall touring screen, and some cheap and cheerful panniers I was ready to go!

The departure date in August came quickly. All loaded up at 5am on the Saturday with extra butterflies in my stomach, I headed out on the M25 towards Folkstone and my appointment with the ‘Chunnel’. Arriving in France, I couldn’t shake the butterflies and the voices in my head shouting, ‘what are you doing!?’ Fifty miles in, the rains came. After a bit of a drenching, something strange happened. The butterflies and doubts all went away. I was in France, in terrible weather, and the trip suddenly became what I wanted: a bit of an adventure.

I’d allowed myself three days to cover the 1,050 miles to my destination, but after the first day I‘d already done 550 of them without any problems and felt fine when I finally stopped. The next day I decided to take a detour through Switzerland to see the mountains. The morning started off dry but it didn’t last long and soon the heavens opened again. It didn’t matter to me though, I was in full-on holiday mode.

Switzerland is a stunning place. Big mountains and big lakes – I loved it! By mid afternoon on the second day I was heading towards the Italian-Swiss boarder. After stopping in a rest area to repair my not-so waterproof trousers with duct tape, I headed out again in the rain to cross the boarder. Not long after, the sun came out. ‘Good old Italy,’ I thought.

The remainder of my ride was a joy thanks to some great Italian weather and by evening I’d arrived at the house having done the last 50 miles on the best twisty roads past some stunning mountain castles. Although I’d arrived a day early, my trip had just begun. From this point I used the house as a base for day rides to various places and finally took the bike off-road for the first time. Although it’s no traily, it did just fine and only failed me once on some hard off-road tracks. I visited a number of places including the tiny farming village of Sidolo, where my family name comes from, the old ghost town Scapini, and the old night club I spent many a summer in as a kid!

Heading home was an equally exiting. The bike performed flawlessly and I was now much more confident; the butterflies had vanished. I enjoyed the ride back so much in fact that I did 600 miles on the first day and didn’t want to stop. Coming off the ‘Chunnel’ and heading towards the M4 I rode with an Italian guy I had met on the train. He was heading to Scotland on his MT03 and in true Italian style his riding terrified me!

My trip wasn’t a ‘big one’ by many standards, but I’m happy with the 2,300 odd miles I covered. I’m now left with more voices in my head. This time they’re saying, ‘do it again!’. I’ve always wanted to see Chernobyl, and who knows, maybe I will…