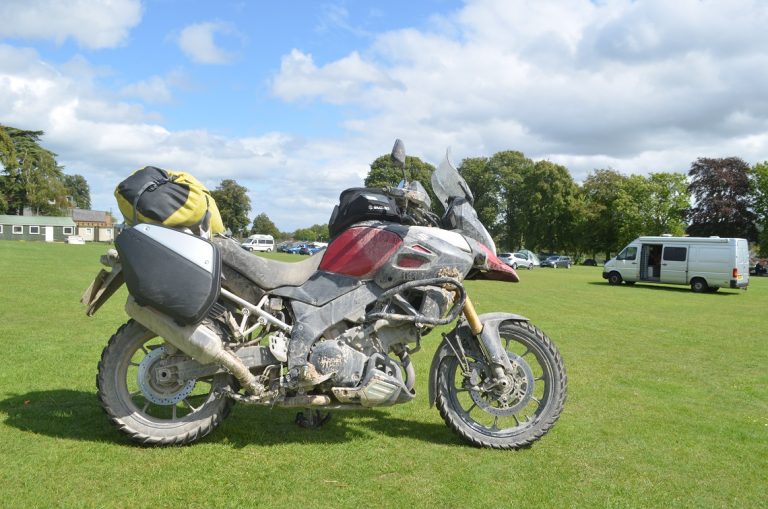 We’ve now covered just over 7,000 miles on the V-Strom 1000, with its first service coming up at 7,500 miles. Were it our own bike we’d probably have swapped the oil and filter mid-way, but with bikes belonging to the manufacturers you generally stick to their recommended servicing schedule. Either way, we find little reason to fault the bike. In fact, in terms of versatility, it’s proving pretty hard to beat.

Of the changes made to the bike this issue the biggest has been the addition of the ‘Adventure’ kit, something that is now offered as standard as part of the £9,999 RRP (some dealers are offering them for closer to £9k).

The kit really should have been offered from the start; it would probably have helped sales as it definitely gives the bike more presence. For reference, the kit includes the panniers, plastic sump guard, hand guards, crash guards and fairing decals. On top of that, we added the centre stand, taller touring screen and the small tank bag option.

Visually, together with the Remus end can, the bike is really starting to come together. The touring screen has also made a big difference to the refinement at motorway cruising speeds, with much less buffeting than before; you can even ride with your visor up at ninety if you feel like it.

The panniers, whilst neatly integrated and aesthetically pleasing, aren’t very practical, with little load space and the exhaust side almost impossible to get much kit in. We have seen Trax aluminium panniers fitted to the V-Strom, so there are other alternatives starting to emerge. Touratech also has its own crash bars and more sturdy sump guard.

In terms of the exhaust, it was useful to ride the standard bikes with the original end can at the TKC70 launch over in Wales. The titanium Remus has certainly given our bike more character, perhaps at the expense of a touch less low-speed refinement, but overall it has benefited the bike; especially in the mid-range where ours does feel to have more muscle than the standard bike.

In terms of tyres, we finally had the Metzeler Karoo 3s fitted, sadly not in time for the Midlands Rally, but just in time for the Salisbury Plain Rally, with this photo taken just after (at the Adventure Travel Film Festival). In the dry conditions of the Midlands Rally, the bike coped just fine on its OE Bridgestone Battle Wings, which, with over 7,000 miles of wear, still looked to be in pretty good shape. 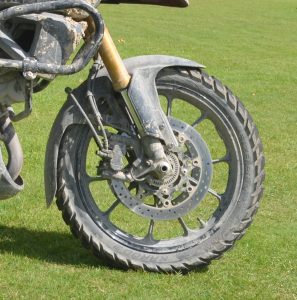 THE METZELER KAROO 3
We fitted the Metzeler Karoo 3s to give the V-Strom more visual bite and to make it more capable off-road, which is an environment that we were keen to explore as the big Suzuki seems to cope surprisingly well. The tyres added grip over the Bridgestone Battle Wings, especially when dropped down to 25psi. They did however compromise – as you’d expect – the on-road performance, which is one of the Suzuki’s greatest strengths. The Conti TKC70s tested this issue might be the solution to this.

Overall we were very impressed with that tyre. Of course, for the wet clay of Salisbury Plain the extra attitude and bite of the Karoo 3s were needed, and whilst they have blunted on-road performance and agility, they have given the bike a better look, and better off-road performance.

For those questioning the sanity of anyone taking a big bike off-road; when you have a 140-mile trip to reach an off-road location, then a bike that can do that distance with ease, and then tackle the crud (and then ride back again) is what many of us need.

The V-Strom 1000 is proving more than capable of that. On the road, it’s quick, robust and fun.

Off-road it’s surprisingly nimble, slim, light, and thankfully easy to pick up. So far we’ve tested the crash bars with a relatively quick slide on grass, and also broken a clutch lever and dislodged one of the handguards when popping out of a rut over on the Plain. The worst though was submerging man and machine in a clay soaked puddle. The benefit of such experiences is discovering a) that the bike bounces well, and b) it’s much easier to pick up than most big adventure bikes; especially the Tiger Explorer that took two of us to haul up.

Having done some reading on the V-Strom forum (www.v-strom.co.uk) it seems some of the bikes out there are suffering low speed running issues; possibly down to slack throttle cables causing the power to suddenly drop off when in traffic, at junctions etc. If you take a test ride it’s worth looking out for this, as our bike doesn’t do it, nor did any of the ones on the TKC70 launch. Might just be a bad batch. Other than that the bike remains impossible to fault, and to think you can now get a bike almost identical to the one on this page for just over £9,000 surely means the big Strom is about to find its niche.