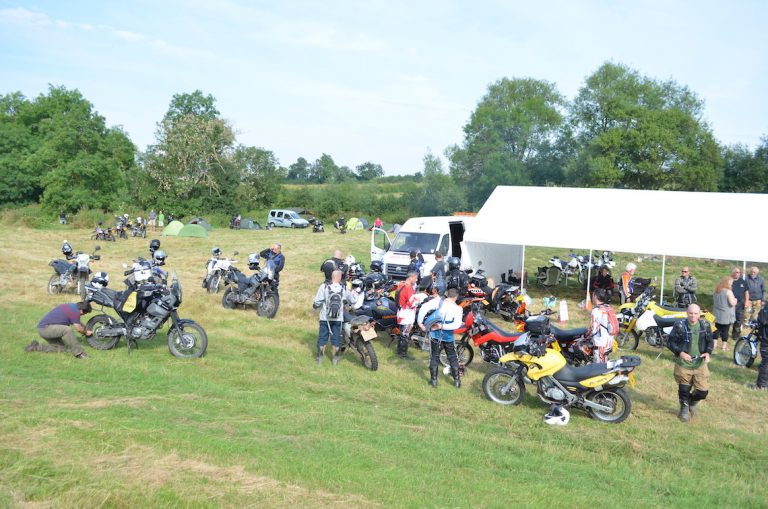 ‘Come along for the trail ride,’ they said. ‘It will be really easy,’ they said. ‘You will be fine,’ they said. I arrived at the rally mid-Friday to a comfy chair in the shade, a cold beer and a nice welcome. After pitching my tent/mobile sauna for the weekend I headed off to the local town for beer, ice and food. All was well as I sat down to enjoy ice cream, cold beer and great company.

Saturday morning arrived and the hills were alive with the sound of KTMs and DRZs arriving for the day’s trail rides. After a good feed we all gathered around the only shade on the site to get our instructions for the day. I was put into the same group as those who’d done it a time or two, which I was happy with.

At this point, I must say that my Ténéré 660 is a wonderful off-road machine, but it is seriously handicapped by one thing; the rider! I’m new to off-roading and basically I don’t want to fall off because it hurts and I’m at that time of life where I remember what pain feels like!

I decided to lower my tyre pressures for the day as I’ve previously found the front too hard and prone to losing grip when dry. Somebody snapped a picture of me doing just that and I’ve never lived it down. I was quiet nervous as we headed off into the unknown as I was told there was no easy ride as all the routes were the same. ‘Oh dear,’ I thought. ‘What have I let myself in for!’

Off we all went around the farm; so far so good. Then venturing even further into the wonderful Warwickshire countryside with its trees and dust. The first few trails were fab, with no issues at all and I started to relax and actually enjoy it. Then we headed off into a small dark wooded section that was fine, but it suddenly popped out into the sunlight to reveal a rutted track running from right to left at about 60 degrees to where I emerged. The front went over fine, but I wasn’t going fast enough and the back didn’t… oh dear! A bit of throttle to get over and my big tall and very heavy Ténéré didn’t like it. It wanted a little rest, so it lay down instead. I can be grateful on three points here; no damage, the chap behind helped me lift it up and nobody took a picture of it.

Off we went again and all was well. I was learning more and more. Watching the chaps in front and seeing their body positions/lines helped me to understand and feel what was happening. I was really having fun now.

Then we went up the hill. To many this was a little bump in the ground that was no issue at all. To me, it was my Everest of the weekend. About 1/4 of a mile up a steep dark narrow lane with big steps every 10 meters of so. Upon seeing the first step my heart was on my mouth, but I could not stop, turn back or do anything other than second gear, and give it some gas. Up the now mighty Ténéré went; no issue at all. ‘I can do this,’ I thought, and I did; fab!

I got to the top to find my handlebars were very loose, though I guess that’s what you get from holding on to them too tightly in shear terror!

More lanes followed; loads of dust but plenty of smiles. For me the final lane was a very very narrow overgrown little uphill blast. I was behind Alun at this point so I tried and succeeded in keeping up with him. My changing attitude to riding after some four hours of riding was shown in this final part. This short lane was very overgrown but had a wheel width track in the middle of the grass. Either side of this bit of brown was dense undergrowth that I was sure held 6ft drop-offs that I would plunge down into at any point. But I wasn’t worried. I pointed the front wheel where I wanted it to go and all was well.

After a lunch of chips and curry sauce, I was done for the day and headed back to the rally site to sweat some more.

I had a fab time and the ride pushed me to go beyond my limits and do things that I would not have done before. So much so that as soon as I got back to the site I went for a blast around the enduro circuit on my own.

Thanks for everything folks. I don’t mind falling off now, at slow speed, as long as it does not hurt and I don’t break anything, that is.

This was my first bike rally, having only passed my bike test in 2013, and I was really looking forward to riding in the sunshine and being amongst some fellow adventurers for a few days. In preparation, I had re-upholstered my bike seat with a fancy Seat Concepts one from America, so I was looking forward to having less of a numb bum on the trip from Burnham-on-Sea to Warwickshire.

My 1996 Suzuki DR350 SE has homemade luggage racks, two old army backpacks as panniers and Heidenau K60 tyres, so I was quietly confident that it could handle anything the weekend could throw at it.

The ride up was warm and easy through Somerset, Wiltshire, Gloucestershire and Warwickshire and apart from getting trapped in Bath between road works and a one-way system, the ride went really well.

I arrived on site and wobbled along the farmers track to the marquee, signed in and made a reasonable fist of pitching my new Mini Peak II tent. The rest of the afternoon was spent wandering around in the blistering sunshine discussing in great detail the features and upgrades on every bike in the field. My fellow ABR riders were a very friendly lot and were all happy to chat. That evening we sat round a big campfire drinking beer and chatting about adventures past and planned.

A nice early start the following morning and the field was alive with the sound of every make of stove frantically boiling water for cups of tea. There were no showers on site so I got a gallon of water from the on-site food van and treated myself to an improvised shower by the stream, think Timotei shampoo advert, but with a 36-year-old bald man squealing from the cold water…

After a healthy breakfast of eggs, bacon, and bubble and squeak we all started getting geared up for the ride outs. As a novice, I wandered over to Alun to find out which ride was going to be suitable for me. It sounded like they would all be the same and I was soon in a group having a briefing about how the ride out sticks together using the ‘second man marker’ system.

It was baking hot so I waited until the last minute to put my armour on and the 12 of us set off. With engines variously roaring and barking we all started wandering down the field and over the trails on the site. I was feeling pretty nervous about riding in a group, I’d never done it before but by the time we got to the first road, I was loving it. I was behind a Repsol liveried KTM950 when we reached the first green lane and as soon as he hit some gravel he gunned it and sprayed gravel all over me, a lesson learned about being too close there!

The next two hours were spent in back roads and green lanes, it was so dry that there were huge clouds of dust billowing along the trails like an American road movie. We were riding between golden fields of wheat in the glorious sunshine with the sun on our backs. We stopped for a break in a wood next to a really steep hill run and took it in turns to get the bikes up and down for the camera. I think the most impressive climb was on the long term test V-Strom 1000 as the bike didn’t really look capable, but it seem to go up it okay…

Next up were two more hours of road and trail fun with a brilliant section up some steps. I’ve never ridden anything like that before and was amazing how my DR350 just ate it up. At the top, there was a slightly more technical bit of solid rock trail where Mike101’s Ténéré got really tired and had a quick lie down. We headed downhill and went through some deep fords, it was great fun splashing around.

Eventually, we arrived at our lunch stop at Bourton-on-the-Water and wolfed down some sandwiches and chips. Before roading it back to camp for some relaxation time. Again it was scorching hot so I treated myself to a quick dip in a nearby stream. That evening we had another campfire and talked about how great the day was and what we enjoyed the most.

Sunday morning arrived and we all decamped and said our goodbyes, I rode out over the trails on the site and was amazed at how much easier I found it than I had on Friday, just those few hours of riding with the ABR guys had improved my confidence loads. The rest of the ride home was easy and I even stumbled across a steam train station where the Bristol Velocette owners club were meeting.

This weekend I’ve learnt loads (although I haven’t quite mastered wheelies like Mikeyboy), made new friends and maybe even found someone to join me on my Spain trip later in the year. My bike behaved brilliantly for the whole trip and considering its 18 years old kept up really well with the bigger bikes. The ABR Midlands Rally was completely brilliant, I would recommend it to anyone.