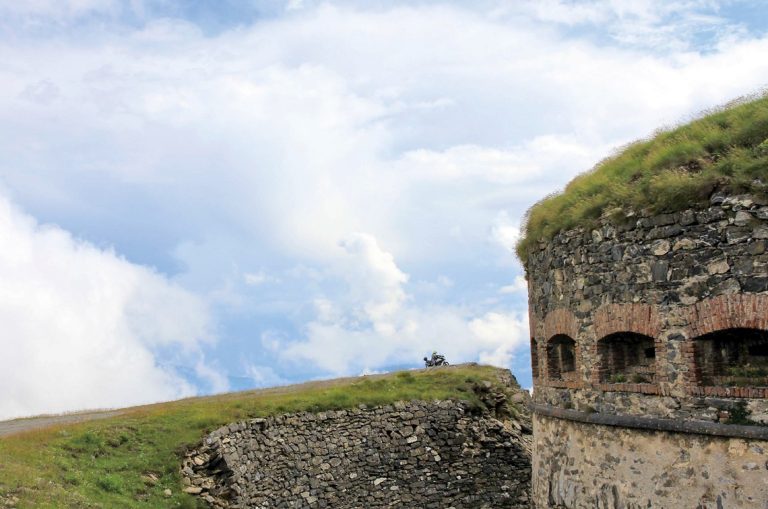 The high peaks of the Alps have been the setting for many a conflict over the years. The tunnels, trenches and via ferrata of the Dolomites are a reminder of the Great War for walkers and climbers and the forts and military roads of the Alps Maritime can still be a battleground for ABRs, as Alun Davies found out. 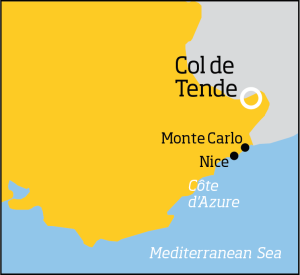 There are times when you don’t need to possess a single mechanical gene to realise that a noise you’ve just heard is not conducive to happy travel.

Doubly so when it’s followed by your back wheel locking up and an abrupt halt.

The Alps are truly spectacular and, to my great surprise, their visual appeal doesn’t diminish even when on a dirt trail in the middle of nowhere with a snapped drive chain. Indeed, whilst I can’t claim that the geological delight of a mighty limestone pressure ridge away in the distance took all my troubles away I have to admit that the XT660 Ténéré choose a wonderful location to call it a day. 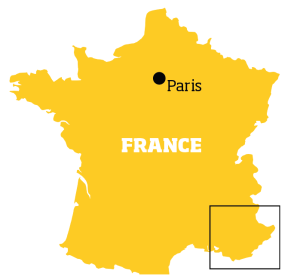 But it wasn’t always like that, history shows that up until quite recently the Alps were considered a dark and foreboding place that were best avoided. Indeed, viewing the Alps as anything other than an impediment to trade or an impenetrable barrier behind which the locals could wave a metaphorical finger at invading armies is a modern approach.

The idea of travelling for the sake of fun, curiosity, learning and laughing at the French was but a fledgling of an idea in the 17th century when young Englishmen of certain breeding took to what became known as The Grand Tour. This post-Oxbridge trek through France and Italy in search of art and culture was undertaken with almost unlimited funds, aristocratic connections and with zero thought of returning home for a hard days work up at mill. Along the way they would follow the ABR ethos of commissioning works of art, perfecting language skills and braying with the upper crust of the continent.

The Grand Tour would usually kick off with a hoolie in Paris before moving on to depositing riches in Geneva. Next up came the mountain barrier into Italy which would be ‘endured’ rather than relished and a crossing over the Alps into northern Italy via routes such as the Great St Bernard Pass would involve dismantling carriages to be ferried over by pack animals. If wealthy enough, the Grand Traveller himself might be carried over the steep terrain by servants.

From a place that had to be endured, the Alps eventually turned into a tourist destination as the flow of people and means of transport and information increased. Railway companies, hoteliers and travel guides joined forces to make the Alps a prestigious tourist destination. Moreover, with the invention of new sports such as climbing and mountaineering in the latter part of the 18th Century – another upper-class British invention – the Alps became the ultimate playground.

However, the fate of the Alps was eventually sealed in 1861 when a young, aspiring Derbyshire travel agent by the name of Thomas Cook offered the first ever package tour to Switzerland. From that moment on a new kind of tourist emerged who specialised in urinating in public places and standing around in ‘Kiss me Quick’ hats whilst admiring the spectacle of the Bernese Oberland and the huge snow and ice-capped north walls of The Eiger, Monch and Jungfrau.

Anyway, back to more mundane and modern matters; the case of a snapped chain on one of the old military roads in the region known as the Alps Maritime, the southernmost extent of the Greater Alpine Range. Unfortunately, I’d forgotten to pack any tools or a chain link which could solve the problem in a practical way and as we’d retired our servants earlier in the day a carry out wasn’t on the cards either.

However, having spent the best part of my life mountaineering and exploring in remote and dangerous regions I knew it wasn’t the breakdown that now mattered it was the decisions I’d take from this point on that would make the difference. And with that in mind, I checked my insurance policy and prepared to throw the Ténéré over a nearby cliff until Bryn reminded me of the environmental hazard and that I was supposed to be a responsible motorcycle magazine owner. Maybe it’s time I started travelling alone.

At this point, I’d better explain that the military roads in the Maritime Alps are predominantly gravel, dirt and rocky trails that criss-cross the historical border between France and Italy. Some have a history that can be traced back to old trading routes dating back to when the Phoenicians ruled the roost. Most, however, date from the mid 19th Century when the French and Italians were prone to throwing toys at each other and, more curiously, when Austro and Sardinian troops thought it a great idea to shoot each other in the ass from mountain ridges near the Med.

We also had no phone signal (and no- one to phone who could help), no camping gear, no tools or spares and more importantly an unmissable appointment booked for 9 am the following morning just outside Nice.

What we did have was a top box full of cut-price tobacco I’d thoughtfully bought in Belgium at the start of our Grand Tour and enough Rizlas to last at least two days. I was so happy I brayed between puffs.

Our choice was this: leave the Ténéré and ride pillion with Bryn to the first hotel where we could arrange a bike rescue or get hold of some parts and tools. The problem with this was that we would undoubtedly miss our meeting in the morning and that, in my estimation, was a no-no.

The second option was for Bryn to ride back the way we’d come to a section of high meadows where we’d noticed a dilapidated stone barn and see if he could find a piece of rope or cord to tow the Ténéré. The third option, which we didn’t consider, was Bryn riding back to the nearest hotel to organise a rescue truck or something along those lines.

The towing option seemed like the most fun way to deal with the problem so off went Bryn in a plume of dust on his V-Strom 650 in search of a tow rope. Thirty minutes later and he returned with a short, frayed length of shit-stained rope, the go-to commodity of mountain farmers the world over.

The decision now was which way did we travel; what we knew was that returning to the tarmac at the Col de Tende involved a fair bit of uphill and a couple of long steep sections on loose rock, gravel and dirt. If we continued on the trail we were not exactly going into the unknown, I’d spent a couple of weeks climbing in the valley about 8 years previous. I knew that the trail descended to the road just south of the village of Tende in France and if I were to take a guess I’d have put money on it being downhill all the way.

But, it was the longer option and I could not be absolutely sure of what we’d encounter. What I did know was that there was no hotel or building between our current location and the road. The decision was made, we’d make our way back to the Col de Tende on the trail that we knew.

Towing or being towed on a motorcycle is an interesting experience. Towing or being towed on a motorcycle on a narrow, steep, gravel and rock track with sharp corners and huge unprotected drop-offs is, er, more interesting. A few miles into the tow and even on the slightest of slopes the Suzuki clutch was starting to slip and it got worse as Bryn had to feather and paddle over slow, rocky and rutted sections. By the time we were at the final and steepest assent it was doubtful if we’d make it to the Col and I for one did not fancy the two-mile push with a fully loaded Yamaha.

But we made it, with the last biting section of V-Strom clutch hanging on to the grim bitter end at the brow of the col at which point it gave up, entirely. We now had two bikes out of action but we were at the top of the ridge and it was all downhill, initially on gravel trails and eventually the old, Col de Tende road.

Fortune favours the brave is a saying I’ll not be paying much attention to in the future and here’s why. We rolled the bikes down from the ridgeline to the point where the trail intersects with the old Tende road. To the left was Italy and the dragon tail sequence of twisties we’d ascended earlier in the day. To the right was the continuation of the old road down into France and the village of Tende some 1000m below. Tende was nearer to Nice and so the fateful decision to take the rock and gravel-strewn trail into France was taken and regretted a couple of hundred metres below.

The road was blocked with a huge pile of debris. At a push we could have stripped down the bikes and lifted them over the barrier but would there be any more obstructions below, or more to the point would there be any road below as this was an obvious sign that someone in authority did not want any vehicles passing this way. We should have followed the tried and tested ‘stay with what you know’ method of getting out of a jam and turned left.

Thirty minutes of heart-thumping, sweat-inducing pushing and we were back at the intersection and free-wheeling down into Italy.

On the way up we’d passed through a purpose-built ski village which at the time we’d not taken any notice of. Unsurprisingly it was deserted, a ghost town; there’s no reason for anyone to be up this way in the summer unless you’re into off-road driving or biking and passing through.

Fortunately, the road kept on going down until we joined the main Tende road at the point where it disappears for 3 miles in a tunnel before emerging in France. The Tende road is a busy, twisty through road for trucks passing from France into Italy and vice versa. 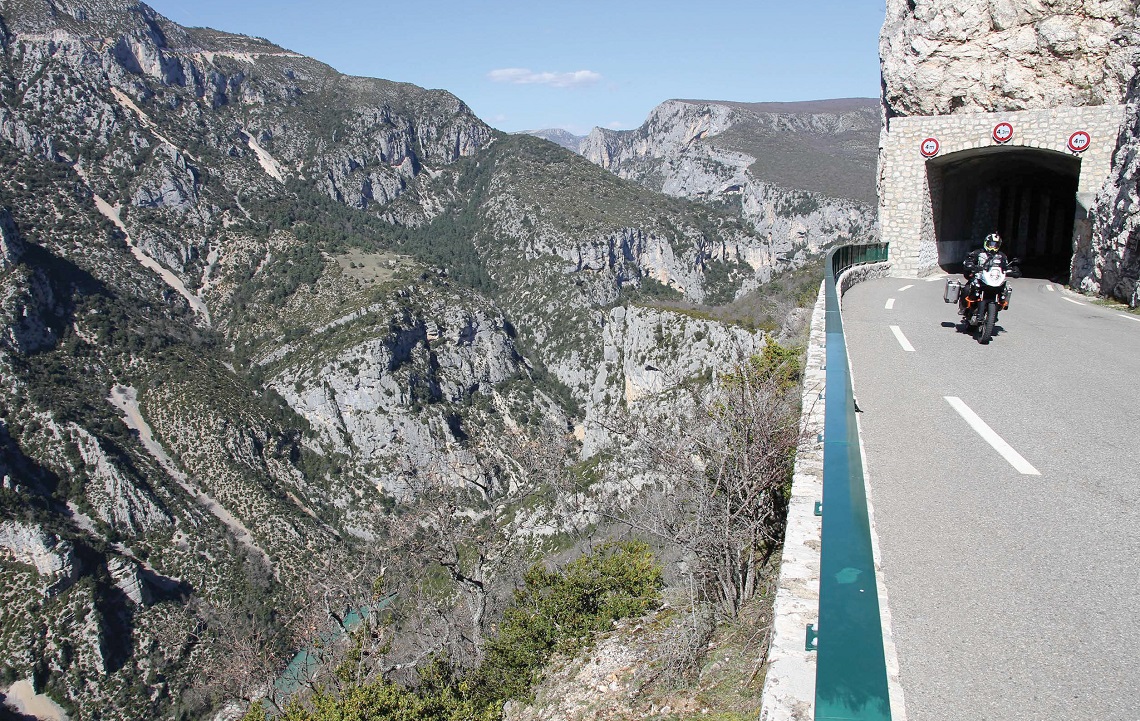 Fortunately, the Tende Road Tunnel is still single track with traffic lights at both ends that change every 20 minutes. As we arrived the queue of cars and vans was just starting to move into the tunnel so we knew we had about 20 minutes to freewheel down the main road with no traffic to contend with. Nice.

With the light now fading fast we glided for a few miles and there it was, a beacon of light with a sign bearing the word ‘hotel’. Two minutes later I was speaking to the Italian owner in English and she was replying likewise. Twenty minutes later, we’d changed and washed and were on the veranda supping beers whilst waiting for steak and chips as Mario (yes, his name was Mario) turned up with a flatbed complete with a ramp. Ten hours later I was at my appointment near Nice on time with Mario and Bryn chatting away aside the truck carrying the bikes. Success.

I’ll be back to finish off those military roads but next time the servants stay with us.