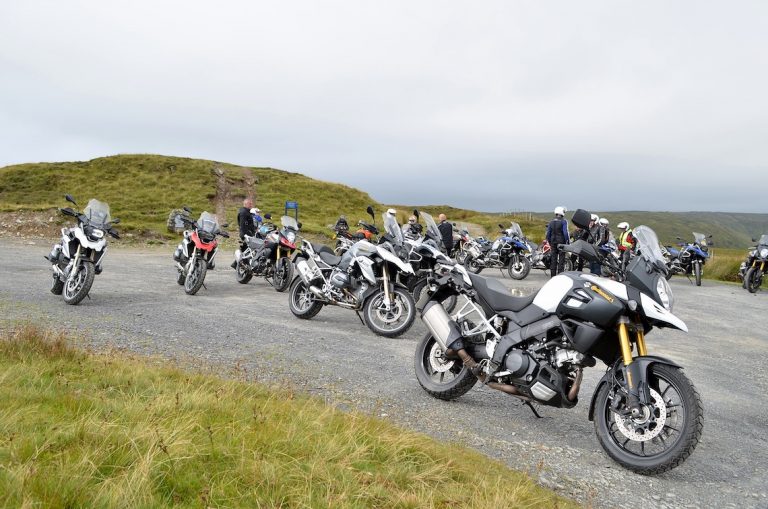 The TKC70 is the new tyre from Continental, a tyre that even they, the company, acknowledge is aimed at the 95% of adventure bike riders who never take their bikes off-road. It is a tyre for those who want the look, but not necessarily the compromise of the sister tyre the TKC80, nor do they want the rather ‘soft’ appearance of the company’s TrailAttack 2. They want something in-between. And that, with the TKC70, is what Continental hopes it has given them.

The tyre boasts a 60/40 road-biased split, with the tyre based on the carcass of the TrailAttack. As a result, the TKC70 features similar multi-grip technology, with the central area of the tyre featuring an abrasion-resistant surface to give higher mileage, whilst the shoulder sections are softer to give more grip on the lean.

Continental makes a mileage claim of 6,000 miles for the new tyre with this test not able to assess that. This instead was a three-day event, with one day given to on-road riding and a day to off-road riding. The TCK70s should be out by October with prices comparable to the TrailAttack 2, which have a current retail price of around £136 for the front and £165 for the rear; size depending.

Continental assembled a mixture of bikes; all large capacity adventure bikes as this is the sector the tyres is being aimed at. There was a sizeable batch of BMWs with either R1200 GS or GSA variants, a pair of Triumph Tiger Explorers, a Honda Crosstourer, half a dozen V-Strom 1000s, a KTM 1190 Adventure (which everyone fought over), a V-Strom 650 and a handful of Yamaha Super Ténéré.

All were shod in TKC70s that had been used by the previous week’s test group. In total the tyres, by the time the test was over, had covered approximately 700 miles. Continental’s claim is for them to last 6,000 miles, though this is something we’re unable to comment on. More time with them will be needed as they do feel quite soft to the touch, suggesting they could wear quite quickly.

We covered a total of around 180 miles on the road-loop (see Right-hand panel for way-points), covering everything from open fast-sweeping A-roads to single track gravel-based B-roads. At times the surface was dry, at other times wet and the weather; raining. What impressed most of us was the level of grip through all conditions. In the fast sweeping sections, you didn’t have to hold back. You could ride at your usual pace with no sense that the tyres had a forty percent off-road bias.

The transition from upright to lean angle was also smooth and progressive, with no noticeable roll of the tread block and no audible noise or rumble from the tyre. Chatting to Chris Moss, a bike journalist who has raced at the Isle of Man TT, he reckoned that on the V-Strom 1000 (which he’d ridden extensively) the TKC70s offered more on-road grip than the OE Bridgestone Battle Wings. He said he could push as hard as he wanted on them and that they were a very good performance road tyre.

The conditions we didn’t get to try them in were on the motorway or in deep standing surface water. There was some speculation that perhaps the tyres wouldn’t be as good in the latter as there are no clearing channels across the main contact point with the road.

Overall though, on the road the tyres were excellent, with it only up above speeds of 90mph that you started to feel a little movement in the tread. Certainly, despite the semi-knobbly look, on the tarmac, the tyres performed more like a road tyre.

The off-road circuit was predominantly fire trails and forestry commission service roads; so hard-packed gravel with shallow gradient curves, the rain making for quite a solid, dust-free base. Mixed in with this were steeper rockier descents, stretches of relatively muddy farm tracks and some grassy sections.

Testing the tyres in abstract, as we were, it was difficult to say how they would compare to rival tyres, but the fact that twenty testosterone fuelled blokes managed a full day’s riding in these conditions without any major incidents perhaps says a lot.

There were a few spills; mainly on the muddy sections, but riding behind a GS on TCK80s and seeing how easy the front tyre washed out on that is a reminder that any big bike in muddy off-road conditions has to be ridden with care. On the gravel sections, the front end had enough grip to make good progress. Push too hard and you could feel it start to wash. The rear offered good grip, with most bikes ridden with traction control turned off. In this setting you could spin up the rear with relative ease, though only when provoked.

On grass the grip from the front was reasonable, and the rear controllable as long as your remained light on the throttle. In conclusion, the tyre is more than up to what is realistically 90 percent of most rider’s ability. They would, for example, have been more than up to the task of the recent Midlands and Salisbury Plain ABR Rallies.

Away from the official test route; we attempted a climb of a steeper, muddier path with exposed tree routes and rocks. With momentum, the tyre would retain some traction, but soon span out once the incline increased and the mud thickened. This was clearly the limit of the tyre’s ability; reminding that this isn’t a full off-road option, but one perfectly suited to intermediate green-laning and for modest exploits into Morocco. Despite the abuse, the tyres didn’t look to have cut up too bad and showed very little sign of wear.

The TKC70s impressed on the off-road sections. More so, they impressed on the road where the grip in all conditions was as good as any road-orientated tyre. It was this transition between being a great road tyre, and a perfectly capable off-road tyre that made the greatest impression. If they succeed in lasting the claimed 6,000 miles then the TKC70 will prove a good option for anyone wishing to go on a long road-based journey, with some decent off-roading along the way. To Morocco and back perhaps.

Below we display other tyres aimed at the adventure bike sector, though as Dave, our tyre expert says, when choosing a tyre you need one suitable for your worst possible scenario. So if you’re going to ride off-road in mud, then you need a tyre that can cope with that. There’s no point compromising as it’ll just leave you stranded. The motto is; decide how and where you’re going to be riding your bike, and choose your tyre accordingly.

Other tyres to consider; just be sure to do your research first… 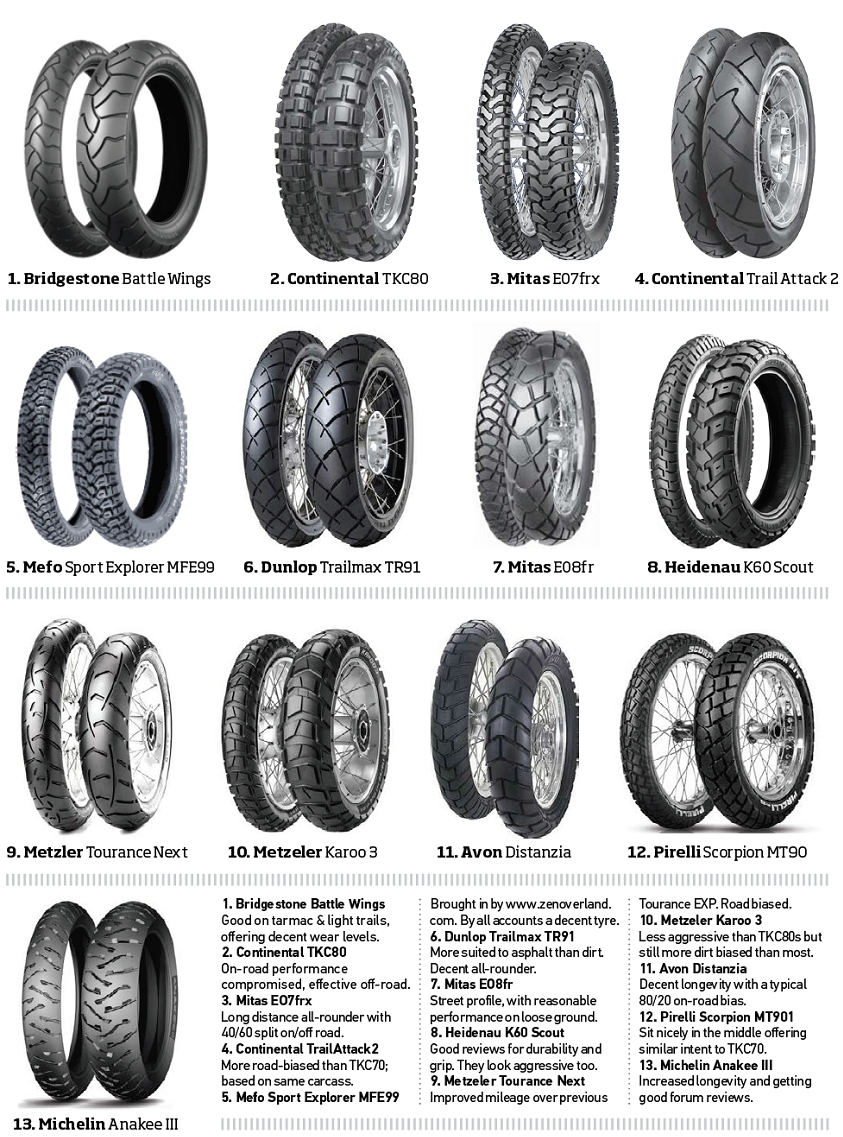