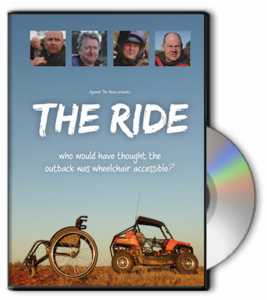 This is probably the best travel documentary we’ve seen in a long time. It tells the story of four Australian men, all confined to wheelchairs having experienced paralysing accidents in their past, who decide one day to ride across the Outback on quad bikes. What makes the documentary so fascinating and lifts it above the level of regular travelogue is that along the way each of them visit the crash sites that put them in their wheelchairs.

Three of them crashed motorbikes, the other was involved in a car crash; all of them now middle-aged with their accidents happening back in their teens. What makes the documentary so great is that it really gets to the heart of the men and to their experiences; how they’ve gone on to live normal and successful lives and how they now plan on driving across the Outback and just what it means to them.

Some of the lengths they go to to do this are outstanding; as an example of human endurance and determination, there is nothing else out there to match it. The documentary is also funny and immensely heartwarming. It’ll make you laugh and it’ll make you cry. By rights, it should be shown on prime time TV for everyone to see. In the meantime, you can order a copy directly from Australia. 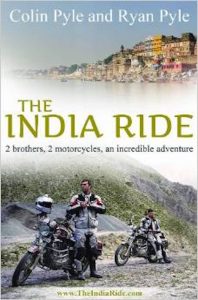 This book is the follow up to the Middle Kingdom Ride and tells the story of brothers Ryan and Colin Pyle who engage on a round-India trip on two Royal Enfields; a dream trip, or so it would seem. Sadly, the book is an accompaniment to a documentary the brothers were filming and is nothing more than a cash-in. Think the Long Way Round book but far less of an effort. It also reveals the pitfalls of doing something for the sake of doing it, or doing it for the wrong reasons.

The brothers don’t seem to be going around India because they want to see it and experience it. They’re doing it to film a documentary, and so they never actually live the adventure or let it take its own route. It’s all about schedule and timekeeping, and moaning about the condition of Indian roads and the filth of the cities, page after page after page.

In a way, this book sums up everything that’s wrong with the current adventure fad; doing something just so you can say that you’ve done it, rather than because you really need or want to do it (perhaps that’s idealism). In this instance, it makes for a very hollow and charmless book which should be read if only to give an idea of how not to have an adventure. Hopefully, the documentary is something much better. 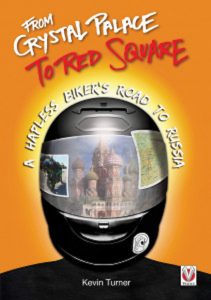 This is Kevin’s book and follows on from the popular Bonjour! Is this Italy? Much like that first book does so well it reminds us all that with the bike we already have (in Kevin’s case a Kawasaki 636 Ninja), a small window of opportunity (three weeks) and a family waiting for us back home, we’re still able to get out there on an adventure and blow off some tumble-weed. In Kevin’s case, that adventure, this time round, involved riding out through Scandinavia and Norway and on in the direction of St. Petersburg, and then back again.

What’s so good, and in a way so unique about this book, is that it’s about an adventure that’s accessible to so many of us. It’s not about some once in a lifetime adventure taking years to achieve. It’s about a three-week blast into Europe and beyond and so succeeds perfectly in getting you dreaming of what you can achieve on your own bike.

The only downside is that at £14.99 and with only 150 pages of text (so many pages of unnecessary images) it doesn’t represent great value for money as even the most casual reader can polish it off in three or four hours. Though that probably says more about how readable it is rather than how short it is. Get a copy and be inspired. 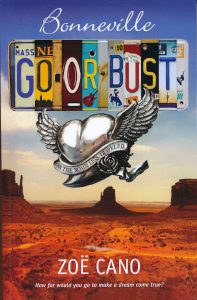 This is a book by a first-time author about riding a Triumph Bonneville motorcycle across the USA; three months on as many of the non-main routes as possible. Zoë Cano’s ambition?

To complete her first long ride on a motorcycle and to find what the back roads would tell and show her about the USA. I liked the idea but was worried that it could be a hackneyed, cliché packed, monotonous diary. I worried unnecessarily.

Her research is deep, the descriptions strong, and her connections with other people are open and friendly. She obviously enjoys people and wherever her journey brings her into touch with them, an inevitably fun, warm or wry moment is described.

Many of her connections come from the fact that she doesn’t use a GPS so she frequently has to ask the way. Each of these meetings is like a pearl on a necklace! A corny comment? Yes, but read the book and you’ll see why it works.