An interview with the man behind Mondo Enduro: Austin Vince 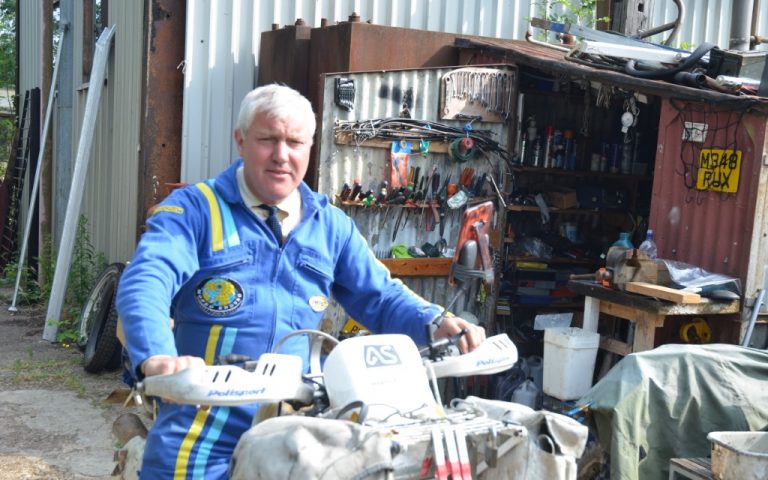 The man behind cult nineties documentary Mondo Enduro is in many ways a divisive character. Some people think he should change the record and move with the times. Others think he has a point. We’ll let you decide…

Why are you so passionate about small bikes?

With Mondo Enduro all we wanted to do was make the film that we wish we had seen when we were younger, because then we wouldn’t have waited until we were 29 to make it happen. We’d have done it sooner. From the get-go we felt we’d discovered something special and we wanted to share it, and then the big adventure bike thing came along and it was heart-breaking for me because it seemed that I’d wasted my time, and nobody had noticed everything that had gone before.

Nobody had noticed what you’d done?

In a way, yes. They (Ewan and Charlie) kind of defined what is an adventure trip. Because their reach was so great. I get upset that the template, the basic template, especially when you’re talking to people that aren’t involved in motorcycling and who saw it on telly, is one of big bikes, big budgets, well beyond the reach of the everyday man. Which is exclusionary. I felt that I’d already established a really healthy template with Mondo Enduro which has kind of disappeared.

What’s your particular beef with LWR?

I object to the fact that the completely normal exercise that we undertook is now being regarded as a benchmark of recklessness, dangerous, not accessible, not viable. It’s hopeless to me if someone watches Mondo Enduro and then thinks they could never do it or shouldn’t do it. I get incredibly depressed when people come up to me and say ‘Hi, I’ve watched Mondo Enduro I loved your film… you guys are mental.’

What’s your goal then?

I guess in a way I want to change the mainstream. I want those who don’t think in a certain way to start thinking in a certain different way. But it’s bigger than that. When you have the careers tables at school and they have banking, construction, medicine, you’re meant to choose one and stick with it and there isn’t a table marked ‘everything’ else. When I was a teacher I used to do these career assessment aptitude tests where the children answered questions and at the end of if you got this computer program that would analyse the results and tell you what job you’d be good at. But they were always jobs that already existed. And I just think how stifling that is, and how difficult it is for kids growing up with such parameters to what they can do and who they can be. I love the concept of cutting your own hole in the shape that you are.

It is if you’ve got enough people involved.

What will it take to make it happen?

To be honest, I’m now laid back enough to realise that the stone I throw into the pond can only ripple so far, and the fact that anything with Charlie and Ewan in will always eclipse anything that I have ever done. I simply can’t compete.

What does that matter; why does it matter if people think like that?

I’ll tell you why it matters, because there’s going to be some guy or girl out there who is dissuaded from riding bikes because of the prevailing attitude of ‘big is best.’ If I had a nickel for every woman who emailed and said I’ve just heard about you or read your book and I want to take a Serow on a trip across America but my husband’s friends are telling me I’ve got to go on a GS650, the smallest bike they do, I’d be a rich man. It makes me angry because I’m a fly paper for a lot of people who I now realise are being put off motorcycling by people who try and dissuade them.

Has this mission become a burden?

Not so much a burden, but I never wanted to become a motorcycle ‘personality’. Pre Long Way Round I was just an ordinary school teacher, then as the years passed after it and what I perceived had been enormous damage had been done to the thing that I most cherished. It sounds a bit weird but I was so distressed by what I saw happening and the way it was going, that’s why I had to put my life on hold and that’s when I started doing presentations and getting involved with it more. That was in 2005. Mondo Enduro finished in 1996. I didn’t do a single presentation between then and 2005, ever.

Because nobody had asked me too, more importantly I didn’t think I needed to say anything because it was all obvious.

Do you think in a way Ewan and Charlie have done us a favour in a way? (making the industry what it is today)

No, I’ve got less money that I had before. I gave up a £46K a year job and I earned £4k last year. It’s killing me. But I couldn’t just sit back and go, ‘Oh well that’s showbiz and that’s the way of the world.’ I couldn’t see it (adventure motorcycling) being pushed in such an unhealthy direction. I think their success was inevitable. Sadly, the impact has been made and I think the impact has been incredibly negative. ‘Don’t try this at home,’ was the message. Can you imagine what it would have been like if Ewan and Charlie had gone off on their own, with a camera on two little motorbikes and done a similar trip? It would have had a completely different impact on the way things are being done.

Do you think it would have had the same success?

They obviously didn’t intend for that to happen; do you think it was just a consequence of TV drama?

No, it was a consequence of their attitude… lazy. The point is they made £600,000 as a book advance. Their panniers were full to the brim with cash before they’d even left so they’re home and dry. They could have done anything. And they were rich beyond our wildest dreams. It’s such a shame. I loved Ewan McGregor, I loved Trainspotting… loved that film, so when I saw they were going to be doing it and copying some of my stuff I was ecstatic, fantastic.

Was it a case of failed recognition for you then?

Not so much that, but just how amazing it’s going to be to see Ewan McGregor riding through the Zilov gap, up to his waste in mud. I remember thinking it’s going to bring so much brilliant attention to what up until then had become quite an obscure funny little branch of motorcycling. It never occurred to me that those guys were going to completely restructure what it was, and to make it dangerously inaccessible.

Do you think that the industry has simply capitalised on it?

Totally, I can assure you that if they’d done their trips on DRZ400 everyone would have gone out and bought DRZ400s.

What can the industry do now? I think the industry is as clueless as everyone else because what they seem to have missed is that less and less people are buying motorbikes these days. And that’s a big problem, for all of us.

Do you think in some ways that the age of the motorcycle has passed?

I don’t think so, but whereas you bought bikes because you couldn’t afford a car, now people can afford a car so it’s different.

What’s your mission then?

What I absolutely want to do is mentor other people to do trips. Motorcycling around the world changed my life, and I want other people to have that experience. Also, the older I get the more important I think it is that we go and meet people in foreign countries.

Is this all part of leaving your legacy, your mark on the industry?

All I ever wanted to do was make a film to encourage other people but when I was making the film all I wanted to be was in my own episode of the Monkeys, that was it, just cock about with my mate’s on camera, edit it and see if it was funny. The rest has come later.

Mondo Sahara (Austin leads a team of seven across the Sahara including the Islamic Republic of Mauritania for a new documentary due soon) is my ridiculous little mission to win the world back from the militarists, the imperialists, from the people who deal with the situation by military violence. Obviously a little seven man team can’t make much of a difference, but we’re giving it a go, one person and village at a time.

And for you personally?

I’m almost fifty, and have to go back to teaching in January. It might be my last trip for a while…