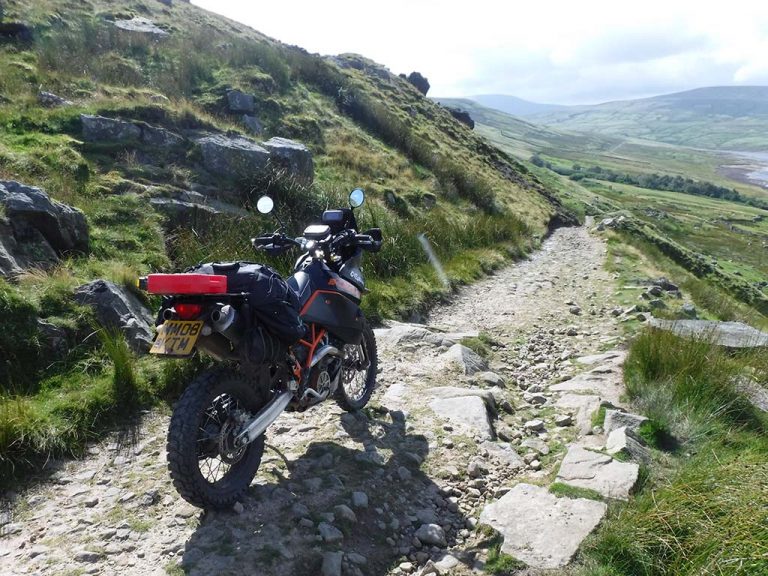 Inmoor lane is a fantastic trail that’s great to ride and one that is fairly demanding if done in reverse. I’ve managed it both ways on a fully loaded KTM 950 SE, but be warned, this is no beginner’s route. It’s easiest from south to north, as detailed here, but the descent to Scar House Reservoir is tricky and consists of tight bends, some rock ledges and a few rutted bits with washouts and large stones to contend with.

Coming back up from the reservoir is challenging especially if you do it without dabbing a foot. Not as easy as it may look from the bottom. The rocky bits seem to appear with no warning and before you know it you will be up and over them, providing you don’t hesitate.

Up until recently it used to be possible to use this trail (and others) to link the Yorkshire Dales with North Yorkshire but the main link route north of Scar House Reservoir, Deadman’s Hill now has a TRO on it. This effectively means Inmoor Lane doesn’t really go anywhere. At the end you will have to turn around and do the trail in reverse (the best way in my opinion) or take the tarmac road back through the valley. It’s definitely one of the best trails I’ve done as I really like uphill rocky climbs. 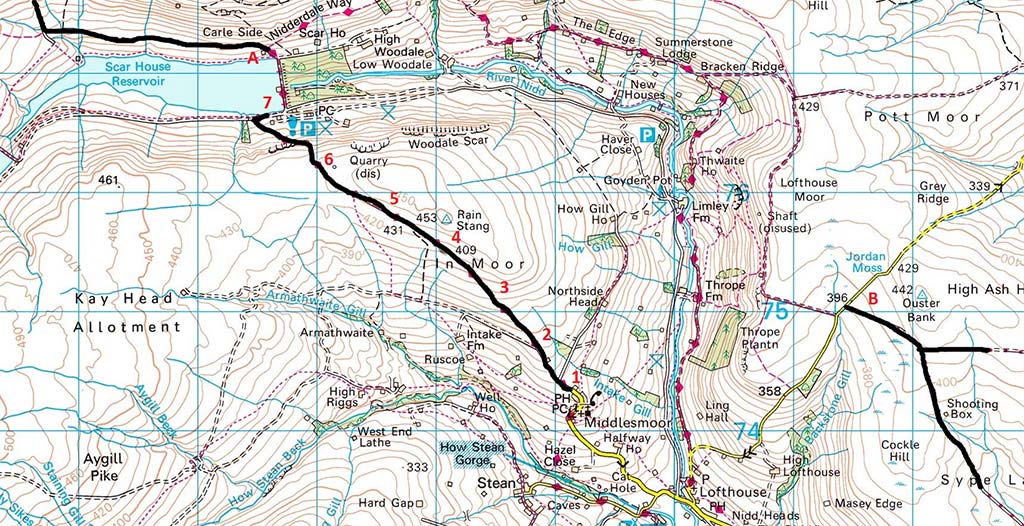 At the end it’s worth riding over the dam wall of Scar House Reservoir, which forms the River Nidd. The surrounding landscape is pretty bleak and I wouldn’t want to be here on a dull day (I rode a coast to coast route last year, and getting up Deadman’s Hill (before the TRO was in place) in the torrential rain, was moral sapping). So be warned, plan for a nice day if possible.

I’ve checked www.trailwise.org.uk and it states Deadman’s Hill has a VTRO on it (a voluntary TRO asking users to approach it from north to south). Since this VTRO was implemented, I’ve seen posts on the ABR forum stating it now has a full TRO on it. This highlights that you cannot rely solely on Trailwise for your information. Always do your own research. There is a ‘no vehicular access’ sign at the southern trail head, but these can’t be relied on either as its all too easy for someone to vandalise them.

Once you’ve done this trail, head to the nearby Masham Moor trail that was detailed in issue 34 of Adventure Bike Rider. 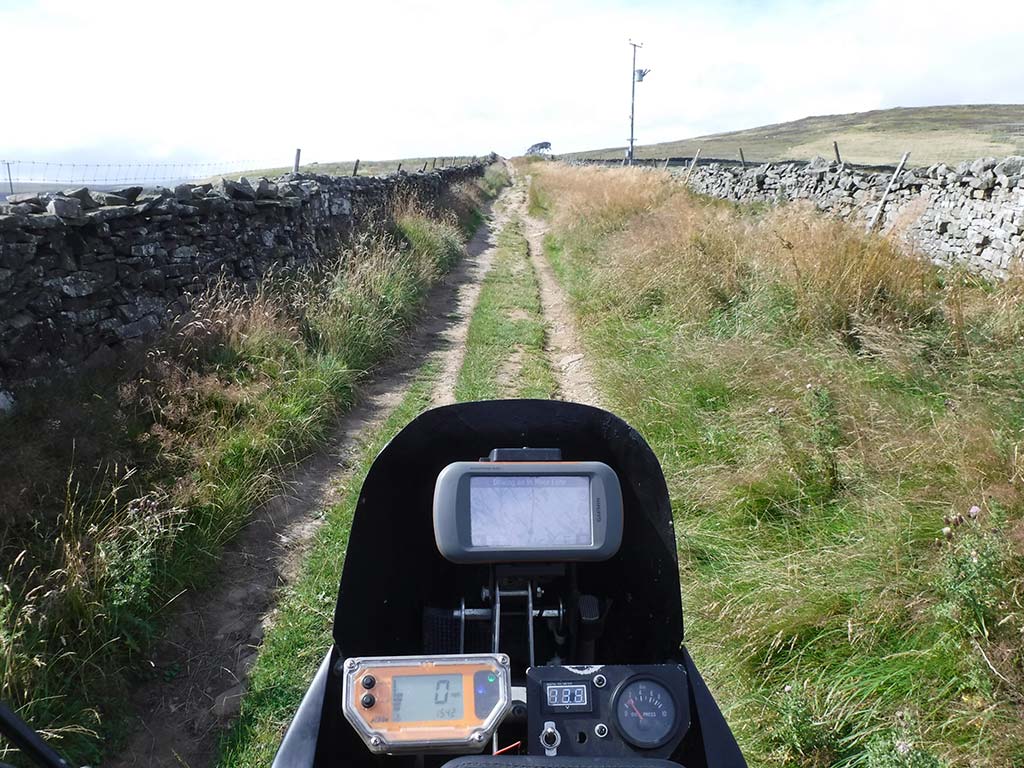 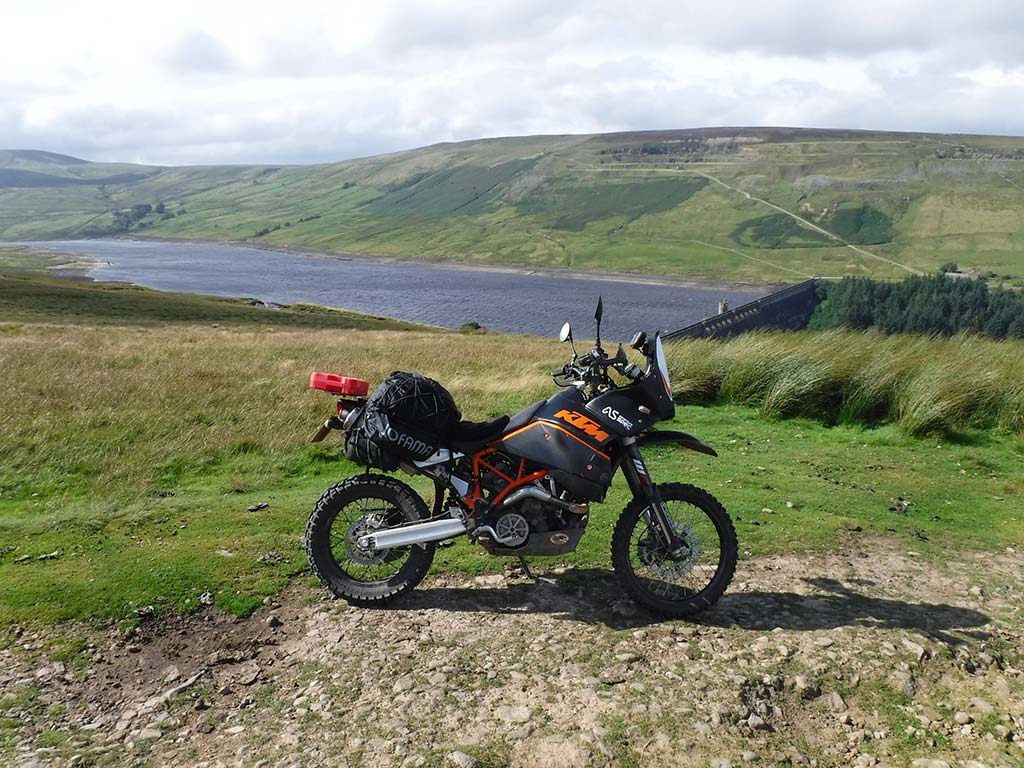 Scar House Reservoir was built in 1921, and to the north are the remains of the quarry used to build it. If the water in the reservoir is low, you can sometimes see the boundary walls of the fields that were flooded during the making of it. South of the reservoir are the remains of the camp used by the navvies (a navvie is a labourer who is employed in the excavation and construction of projects) who built it. The site was like a small town, with a cinema, school, canteen, reading room, church, hospital, bakery and laundromat. 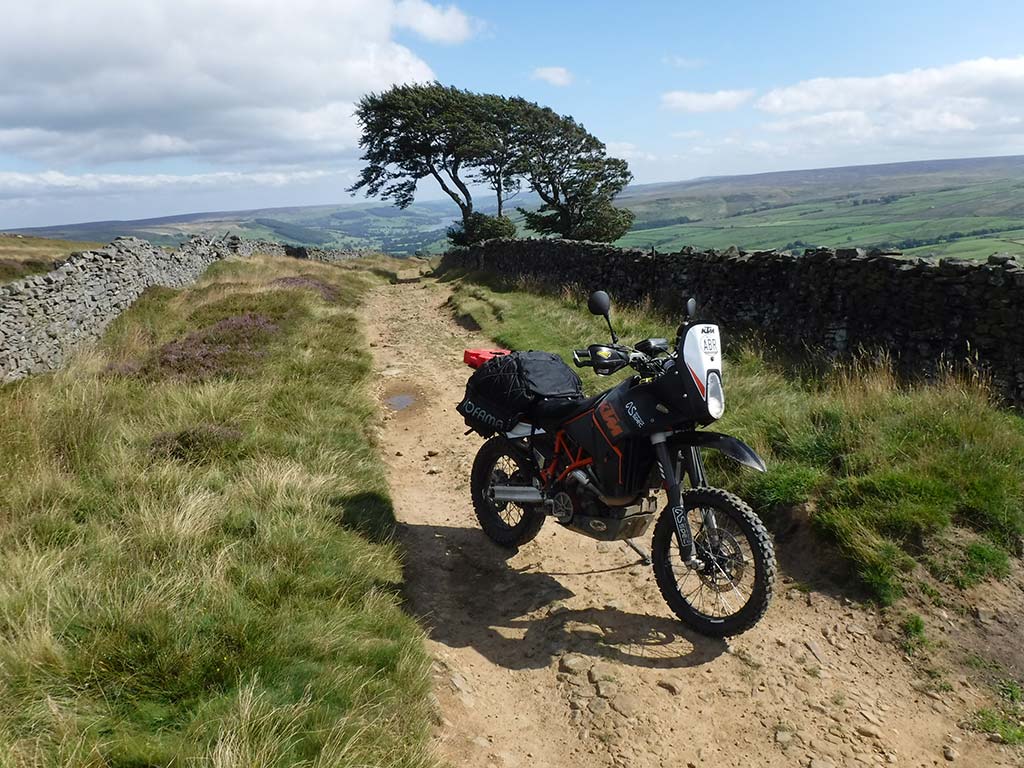 1-2
The trail starts just after you pass through the hamlet of Middlesmoor. It begins as a graded road between two large walls. It’s easy going with a few turn off s into the nearby fi elds. Pass some buildings on the right and continue straight on. The road will fork. To the left is a gate where the graded road continues. Straight ahead is Inmoor Lane and where you need to go.

2-3
You can see the track heading off into the distance. It’s ungraded and the first obstacle is a drainage ditch crossing your path. Be aware of it as it’s all too easy to pick up speed leading up to it. The going is still fairly easy with more rocks and a few loose stones. The trail is about the width of a 4×4, with some grass growing in the middle. There are great views over the wall to the left as you climb uphill.

3-4
There are a few rocky ruts now and a couple more drainage channels to cross. The going gets a bit harder and a few puddles start to appear. It’s pretty bouncy as you proceed, and before long your arms will really be pumped. As you get further along it gets a lot more rocky and a bit narrower. Only the toughest of 4x4s will get this far. After this section it’s time to take a break and look behind at the track and the amazing views back towards Middlesmoor.

4-5
The trail starts to level out now and the going becomes easier and riding a bit quicker. Eventually you will hit a graded section with golf ball-sized stones across it. It’s never easy riding over this kind of terrain so take care. Continue to the gate.

5-6
The trail is pretty much flat from here on. The views are down to the left into the valley. The wall starts to disappear to the right and opens up to moorland. Stay on track. As it’s flat there are a few puddles along this section. Head to the next gate.

6-7
This is where the best bit starts. After a short, flat section you will begin to proceed downhill all the way to Scar House Reservoir, which will be visible beneath you. The views are spectacular. There is no more wall now and it’s open moorland all around you. Its worth stopping and taking in the views because once you start the descent you will really need to keep your eyes on the trail. If you look towards the other side of the reservoir you will see the TRO trail running alongside it, this is the start of Deadman’s Hill. The descent has to be ridden to be appreciated. It winds its way down the hill with a few tight bends full of rocks, a few rocky ruts and a few small rock ledges that require a leap of faith as you drop off them. As you near the bottom the hardest bit appears, a larger rocky ledge and it’s easier just to ride straight off it than mess around. This takes some bottle to ride up when coming the other way. You finish the trail when you meet the tarmac road at the bottom. Now turn around and have a crack in reverse. Try to do it without dabbing for a real challenge. For those that have had enough, turn right and follow the single track road back to Lofthouses.

A
This is the start of Deadman’s Hill running alongside the northern shore of Scar House Reservoir. At the end it turns and heads north of the map.

B
This is Masham Moor detailed in ABR issue 34.

The Danby Beacon Moorland Tracks are fairly easy routes that are well suited for beginners, and can be ridden on pretty much any bike if care is taken. They off er some fantastic, fast riding across wide moorland tracks with great views, especially from the Beacon Hill (Danby Beacon) viewpoint which has a tremendous 360 degree panorama of moor, dale and sea.

There is an optional track heading straight down from Danby Beacon and this is a lot harder, in fact I’d suggest a minimum grading of three which will become a four in the wet. On my OS map it’s not even marked as a legal trail but it is on www.trailwise.org.uk, and there are no signs stating otherwise on the ground. Plus, the fact that it’s obviously a well-used track, especially by 4x4s that have left the area in a rut filled mess. In the wet it’s very slippery and the deep ruts, of which there are many, are filled with muddy water. I enjoy doing this section uphill, and it’s a real achievement to do it without dabbing. Although this is pretty much impossible due to the ruts.

For the beginners out there, give the above section a miss. You will enjoy the two, easy-going, wide tracks across the moor. Be wary though, these tracks are pretty high, 200-300 m, and take the brunt of any bad weather rolling in from the North Sea, which is only approximately 15 miles away as the crow flies. 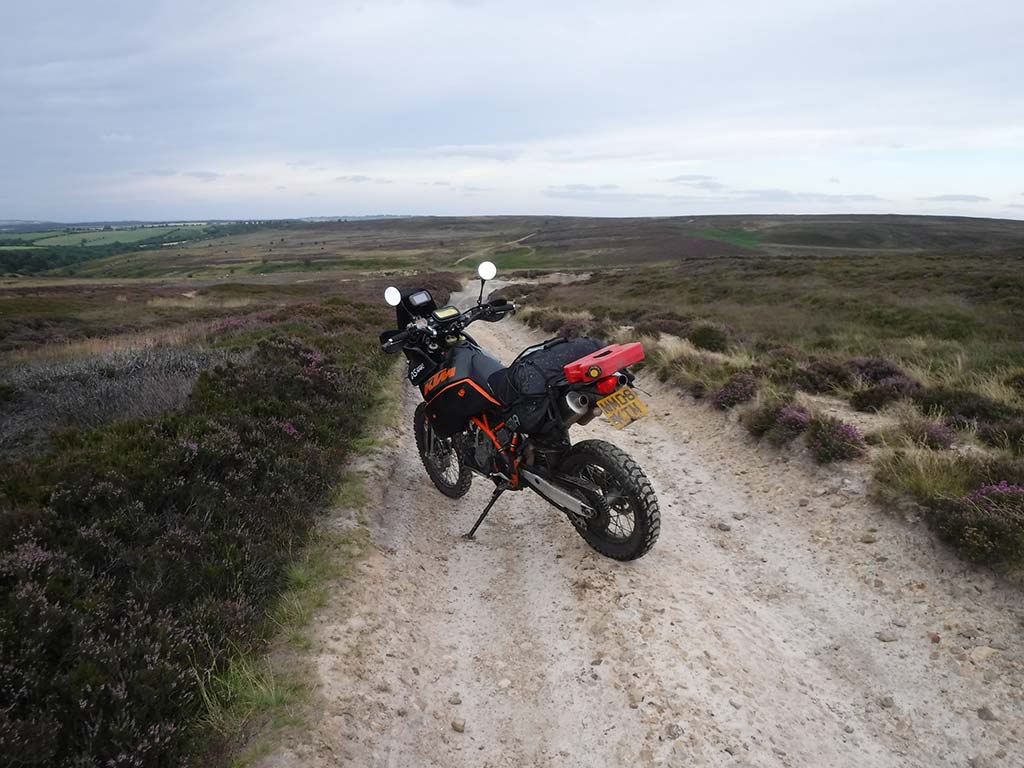 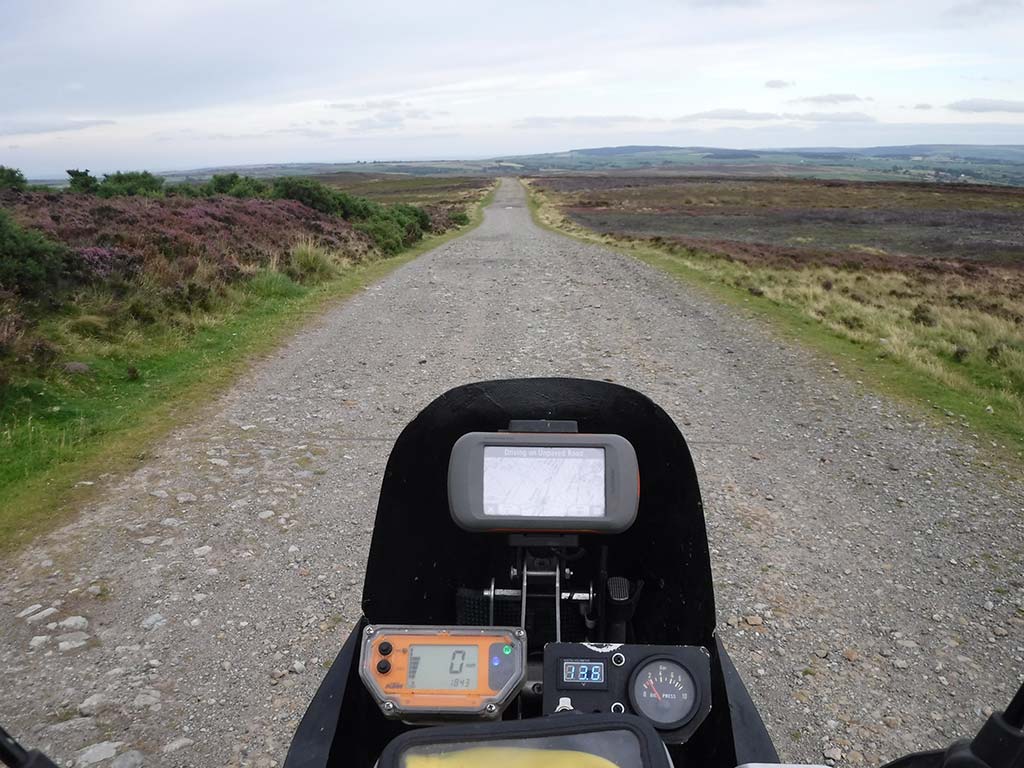 DID YOU KNOW
A beacon sits at the highest point above the village of Danby and has done for more than 400 years. The Danby Beacon dates back to the 1600s when the country was living under the threat of invasion from France. It was the duty of a soldier and his wife, stationed upon the moor, to be vigilant and watch for the expected French fleet. If they had sight of them they were to light up the beacon, which would be the first inland fire of warning. In the 1930s, the site became home to one of the first radar stations guarding the North East Coast during the Second World War. Over the years, the old wooden beacon aged so much that it eventually disintegrated and fell down – the landmark was lost until a new metal beacon was constructed. 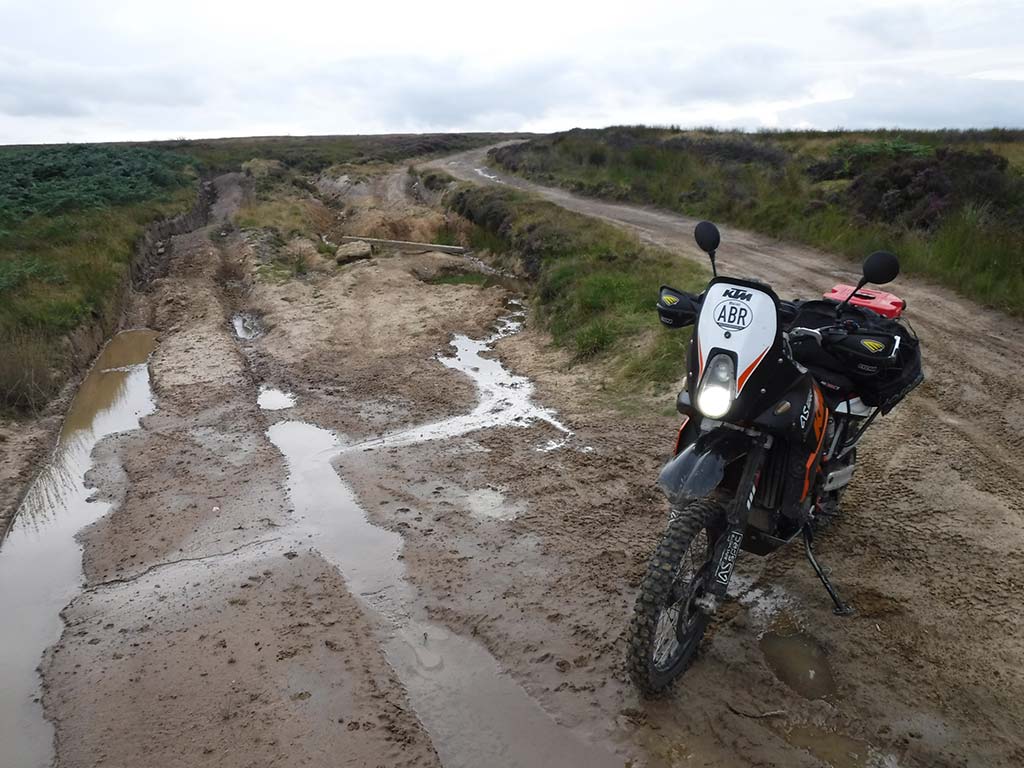 1-2
The trail starts at the car park and begins as a deteriorating tarmac road. It has a hard compact base that’s a couple of car widths wide. As you proceed, moorland will become visible to the right and you pass another busy car layby. This is when the views to the left open up. There are lots of puddles but none of them are deep. Continue to the house and imagine what it must be like having a view like that straight out of your front door.

2-3
There’s a track off to the right and this is followed by an obvious off -piste section. Stay on track. There are some serious scars to the area caused by 4x4s venturing where they shouldn’t. The route is now blocked by strategically placed boulders. Slightly further along there is more evidence of off -piste activity. The main track is still easy, with a mix of sandy sections and a hard compact base with a few loose stones. 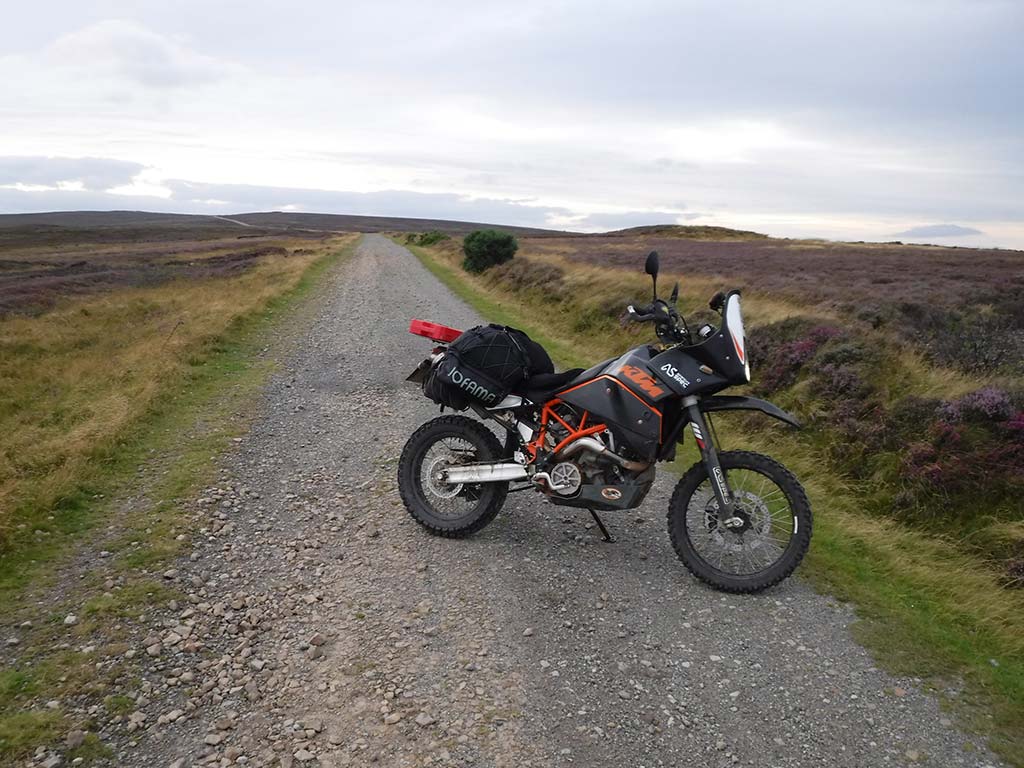 3-4
The going is easier now and heads dead straight across the moor. There are a few minor shallow ruts, just be aware of them as you pass before they flatten out. There’s some grass growing in the middle of the track and as you near the end you’ll see a couple of repaired sections. These are about 10 feet wide but consist of broken bricks, so they’re not the easiest to ride over. Continue to the tarmac road. When you get here look to the right and you should see Danby Beacon on the hillside in the distance. This is where the next section starts.

5-8
This is the optional harder section. It should be a nice winding track down the moor, but it has been widened by 4×4 use, which has left deep ruts and scars in the moorland. Pick a rut and hope it’s the best. They all diff er in complexity and no single route is easy. There’s likely to be a lot of mud en-route so take care, especially on the bigger trail bikes. Stick to the main track as much as possible and don’t wander wide to try and dodge the trickier bits. This just makes things worse. 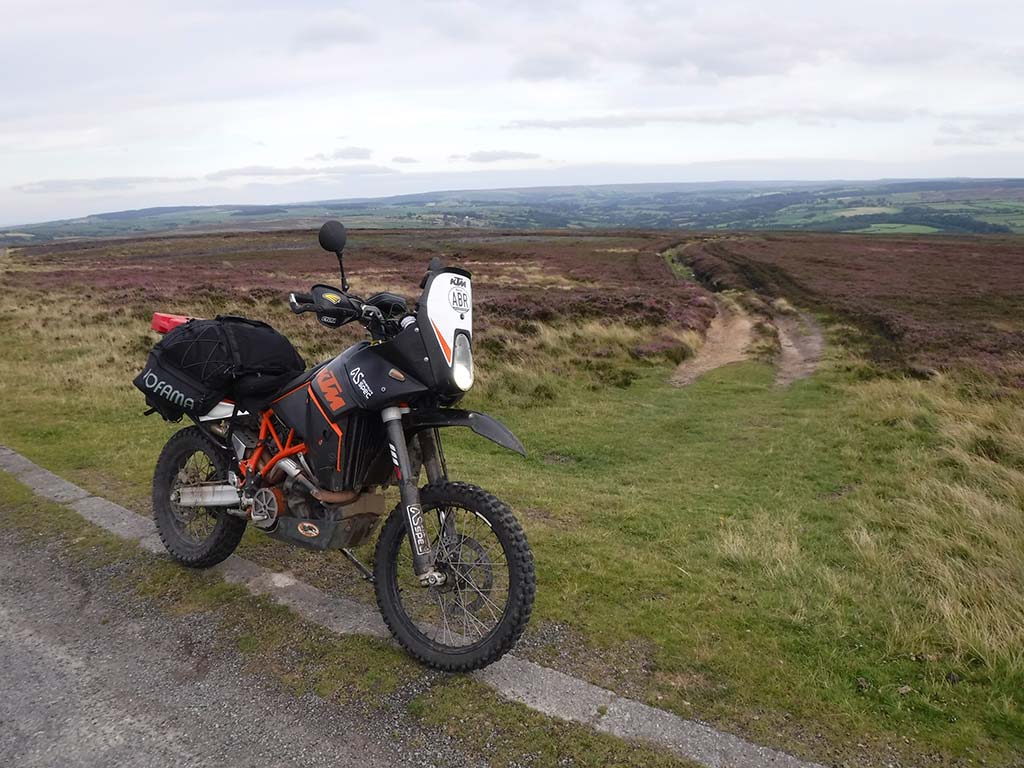 5-6
This section starts at Danby Beacon car park. It’s easier than the preceding trail and consists of a slightly downhill (from 299m high to 221m) wide track with a hard compact base.

6-7A & 7B
The track splits here. Both routes are easy enough and finish when you reach the tarmac.