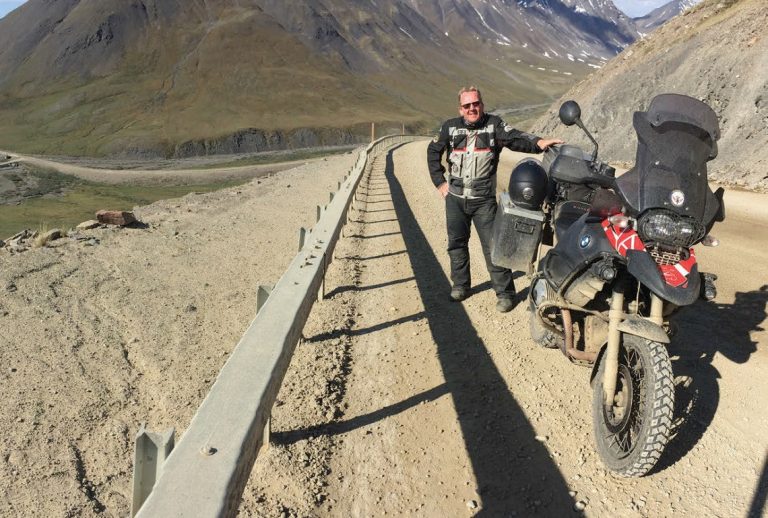 Name: Steve Church | Age: 56 | Occupation: retired in 2001 (apparently) Now work in child protection for the police as a civvie and run a carpet cleaning business.

Ferry if there’s time and because it’s an event and can be part of the trip. It’s a tunnel if I’ve got distance to cover. I love Flexi plus tickets. Expensive but you bypass everything with no queues.

The most costly were my series two Metal Mule panniers I bought in 2007. They were £1,500 but have never leaked and still look good after nine years so I wouldn’t class them as expensive. £350 is also a lot for a pair of boots. However, my Daytona GTX boots are still going strong after seven years. You can’t afford cheap gear.

To have a motorcycle for every day of the week and a workshop and garage to keep them in.

My GSA. I usually like to travel alone. That makes me sound like a misery, but that’s not the case! It just gives you the flexibility and freedom to stop when and where and to do whatever you want.

Dalton Highway in Alaska last year. I’d ridden near enough the whole 450-mile length of it in a day and was only a few miles out of Fairbanks and thinking to myself what a great ride I was having.
Had to suddenly swerve to avoid a moose and calf.

Finishing up in a ditch with the GS on top of me pinning me down. In a remote ditch in fading light with a quarter of a ton of GS on top of you in bear country is not where you want to be!

So many, so it’s a tough one, but riding over the Golden Gate Bridge on the GS is up there. I was also once privy to a conversation between Mick Grant and Ferry Brouwer about tuning race bikes. Ferry used to be Jarno Saarinen and Phil Read’s mechanic back in the day. Mick of course is a TT legend so what collectively these guys don’t know about motorcycles and racing isn’t worth knowing.

■ What do you miss most when travelling?

Family, as my stay at home wife sadly doesn’t share my Overlanding passion.

■ Person you would most like to meet and what question would you ask them?

If you ask anybody who knows about racing, most say that Jarno Saarinen probably would have been the greatest ever had he lived and had a full career. I’d just listen…

■ Write a personal dating ad for you and your bike

Fellow traveller wanted. Preferably to have a double garage, workshop and several other motorcycles.

If you want to be a reader exposed in a future issue of Adventure Bike Rider, email [email protected] and if we feature you you’ll get a free year’s subscription to the mag.

You can’t say fairer than that, eh?