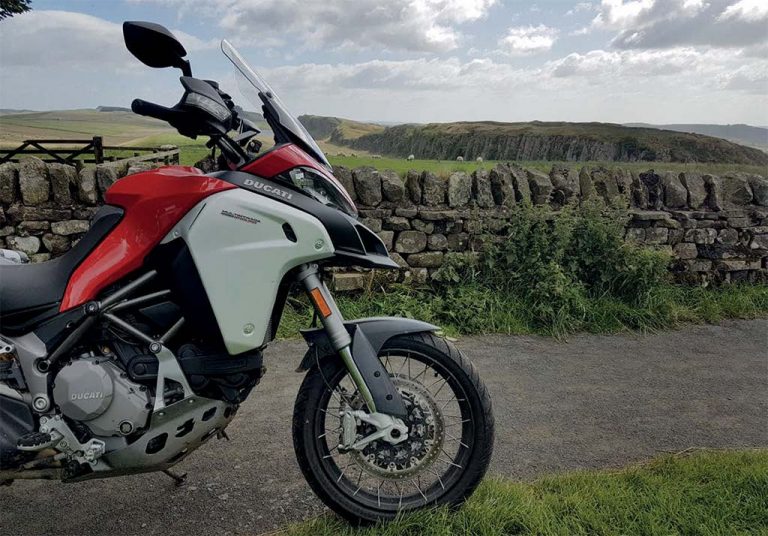 Over the past two months, I’ve noticed more Multistrada Enduros on the road than over the previous six months, including two displaying ABR stickers. I’ve also started a long overdue audit and clear out of the Davies garage with a view to buying a new machine.

I suffer from a condition, some would say a disorder, though I take great comfort in knowing that I’m not alone in my sometimes complicated world on two wheels. In fact, I’d guess that a few reading these words right now will be nodding in recognition in short time. The ‘problem’ is that I’m good at buying bikes but absolutely useless at letting them go.

I hang on to old bikes by strumming the same emotional strings that had me squireling away memento from the days when my children were born. It’s absurd, of course, all those newborn wrist bands and that maternity ward paraphernalia taking up space that could be filled by old service receipts and oil stained manuals.

However, with the recent ABR office move, I’ve been forced to confront my demons and do a little more grown up thinking. This has resulted in the sale of some of my less-used older machines and a few more due to leave before the end of the year.

Naturally, this has led to a great deal of thought over what I can replace them with. I’ve considered buying like for like but then that got slapped down by the perfumed side of the living room, or as some would say my better half. She just doesn’t get it but makes great curry, so compromise is key. And that compromise could well be the Enduro.

Whilst the wife is not a regular pillion there’s no doubting she enjoys our regular Sunday ride outs and weekends away on two wheels. There’s also talk of longer European trips now that the nest is starting to clear.

It’s therefore important that I have at least one (preferably ten) bike on tap that is spot on for comfortable two-up ride outs and touring. And here’s the great news, she absolutely loves the comfort, protection and performance of the Enduro. Better still, she loves the look of the bike and has started to refer to it as ‘our Ducati’ rather than ‘your bloody bike’.

Over the course of the past seven years that I’ve been running test rides for ABR there’s only been one other bike she’s felt so passionate about and that was the BMW 1200 GS Adventure. It’s beginning to look like I can’t lose here, it’s just going to cost. Once again, the Ducati Enduro experience just keeps getting better.