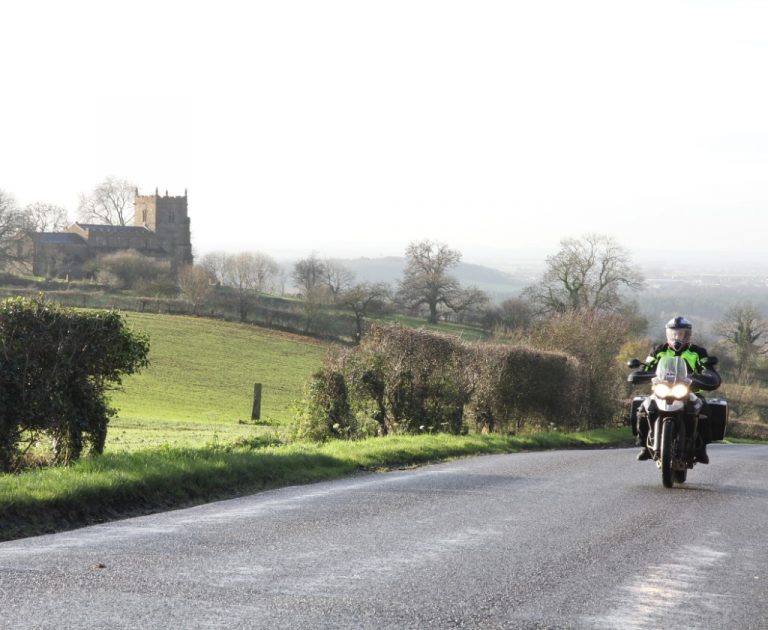 At 147 miles long, the Viking Way takes you through the heart of the historically rich county of Lincolnshire. Bryn Davies explores the UK land which was once home to the Vikings…

Over the last year we’ve been riding some of the most beautiful areas of Britain by following the many long-distance footpaths that twist and turn their way through our lands. These trails have a habit of taking you through some of the UK’s most incredible scenery, steeped with history while enticing you to ride along roads which you would never usually consider exploring.

The Cotswold Way, which we detailed in the last issue of ABR, forms what is now one of my favourite routes, and so for this issue, we take a trip up the Fosse Way from the northern boundary of the Cotswolds to Lincoln, before a short ride up the A5 to Barton-upon-Humber. It is here, in the shadow of the world’s seventh-longest single-span suspension bridge, the Humber Bridge, that we begin our journey to ride the 147-mile long Viking Way.

The northern trailhead of the Viking Way is found at the old coastguard station on the banks of the industrial Humber estuary and it heads south, taking you almost the entire length of the county of Lincolnshire. Before long it meanders into the Lincolnshire Wolds, an area of low lying, rolling green hills which has been designated an Area of Outstanding Natural Beauty and then takes a turn to guide you through the dead-flat Lincolnshire Fens.

This land bares a striking resemblance to the Netherlands, though you shouldn’t let the flat nature of the fens put you off. The roads through this area are an absolute joy to ride as they needlessly, but thankfully, twist and turn through the endless farmland before taking you to the Kesteven Uplands where beautiful grass-covered limestone hills await.

Despite the footpath’s name, it actually follows old Celtic routes through what is now the county of Lincolnshire. These pathways would have been trodden out some 1,500 years ago, and it wasn’t until 793AD that actual Vikings made landfall in the UK, sacking the monastery on Lindisfarne and setting in motion the Viking Age of Invasion.

After years of fighting, in a treaty drawn up between Alfred the Great, then King of Wessex, and the Viking King Guthrum, Danelaw was established, creating a Viking land in the UK with a border defined by “Up the Thames, and then up the Lea, and along the Lea to its source, then in a straight line to Bedford, then up the Ouse to the Watling Street.” While York may have been the capital, Lincolnshire was the centre of this extensive domain. The influence of the Vikings began to dwindle in the following years, and by 1066, after the invasion of William I, they were all but done for.

Nevertheless, the county of Lincolnshire still has a rich Norse heritage that’s almost impossible to escape. As you ride along the Viking Way it’s hard not to note the frequency of place names with ‘by’ at the end, which meant small farmstead in Danelaw.

So, after a full English breakfast and a brief stop to admire the impressive Humber Bridge, we headed off in search of some Viking history and great roads. Our route would take us on the A15 out of Barton, and on a fast track towards the more picturesque and enjoyable Lincolnshire Wolds.

As we passed Humberside Airport the roads began to tantalisingly twist and turn with the green hills fast approaching in front. We entered the Wolds through the small but pleasant town of Caistor, the site of an old Roman fortress. While all that remains of the fortress is a wall on the southern boundary of the church of St Peter and St Paul, the number of Grade II listed buildings makes the town one of the most important conservation areas in Lincolnshire.

After navigating the narrow streets of Caistor you begin to climb into the Wolds. Every now and then the views open out and the Lincolnshire Fens spread out below you as far as the eye can see. While not as spectacular, or as wealthy as the Cotswolds, the Lincolnshire Wolds hold a distinctive and elegant charm that makes them a joy to discover. The roads, at least when we visited, were empty despite it being rush hour, and the way they rise and fall along the escarpment makes for a thrilling ride.

We took a short detour from our route to scope out Cadwell Park, one of the UK’s most exciting race tracks. A visit here is a must for any motorsport enthusiast and a brief walk around the empty paddocks revealed a large poster of Alun’s childhood hero on his MV Agusta, Giacomo Agostini.

After satisfying our need to see Cadwell Park we headed to the market town of Horncastle. Like Caistor, Horncastle was once the site of a Roman fort, though it is now a centre for the antique trade, having won the much-coveted title of ‘Best Antiques Town’ in the UK in 2001. It is here that we stopped for a coffee and a bite to eat at the marketplace, in the Pop Inn Café, perhaps the greasiest, but most welcoming café we’ve come across.

Feeling fully satisfied from lunch the Viking Way took us southwest out of town towards Woodhall Spa and the edge of the Wolds. Woodhall Spa is a pretty village and is home to the country’s last remaining rear screen projector cinema, though the riding was so enjoyable we decided to press on to the low lying fenlands.

The fens are a bizarre sight at first, from the rolling green hills of the Wolds you’re deposited onto land that stretches in front of you like a billiard table, and while it’s logical to think that this would mean boring riding, the reality is far from that. The roads twist and turn erratically along the flat land, presumably following the boundaries of farmer’s fields, and in the distance, looming ominously is the hulking figure of Lincoln Cathedral.

The ride towards Lincoln takes you through Witham Valley, an area of England that was the most heavily populated with monastic houses and abbeys during the Middle Ages. While many of these holy buildings have faded from both memory and the land, there are still plenty of ruins to admire as you take a trip along the Viking Way and the route takes you past no less than three of them.

As we continue on, we skirt the structure that has been watching us for the last 20-or-so miles, Lincoln Cathedral. Built in 1088, the cathedral is the third-largest in the UK and between the years of 1311 and 1549 it was reputed to be the tallest building in the world (losing its title to St Mary’s Church in Stralsund, Germany).

The sheer scale and beauty of the building is hard to comprehend, even when stood at the base of the mammoth west towers. It’s possible to ride within touching distance of this majestic show of Gothic architecture and it is well worth taking some time to explore Lincoln while you’re there. 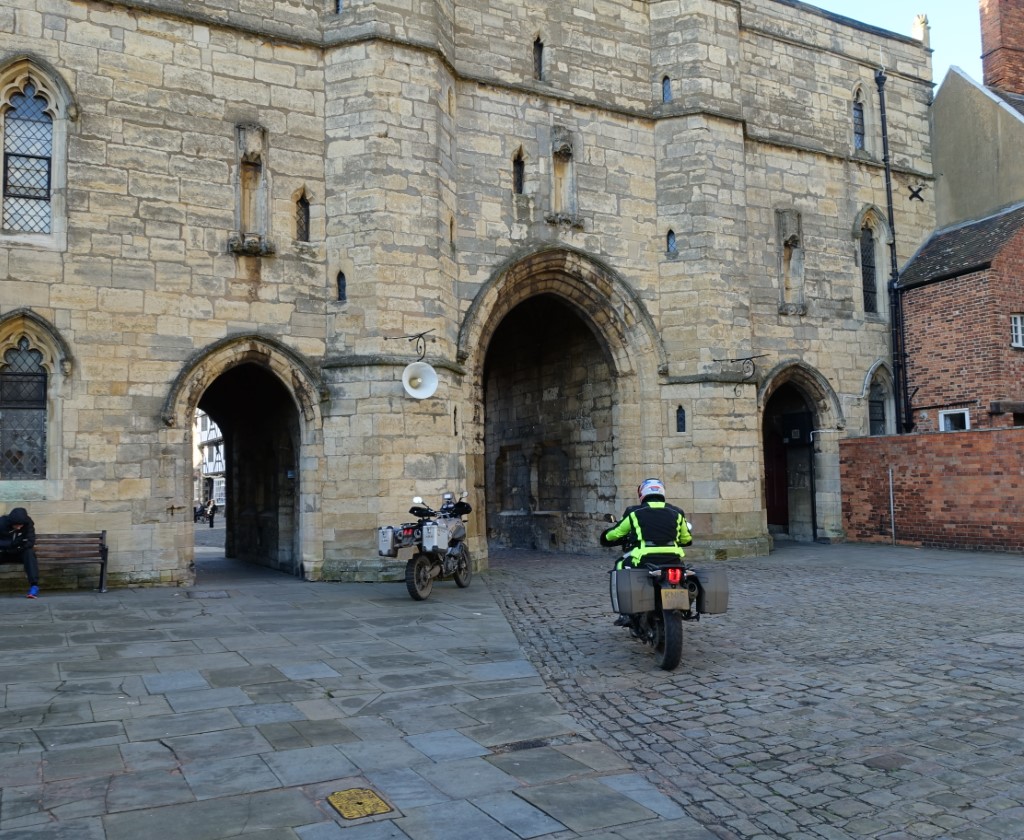 Upon leaving Lincoln, almost out of nowhere the ground drops beneath you as you descend Lincoln Cliff and continue along the Viking Way past RAF Waddington. From here the riding towards Oakham is enjoyable and entertaining along B-roads around the western edge of Grantham, the birthplace of Margaret Thatcher, and into the Kesteven Uplands. It is here that we find the shores of Rutland Water, one of Europe’s largest man-made lakes, and the A606 which takes us to our finishing point in Oakham. 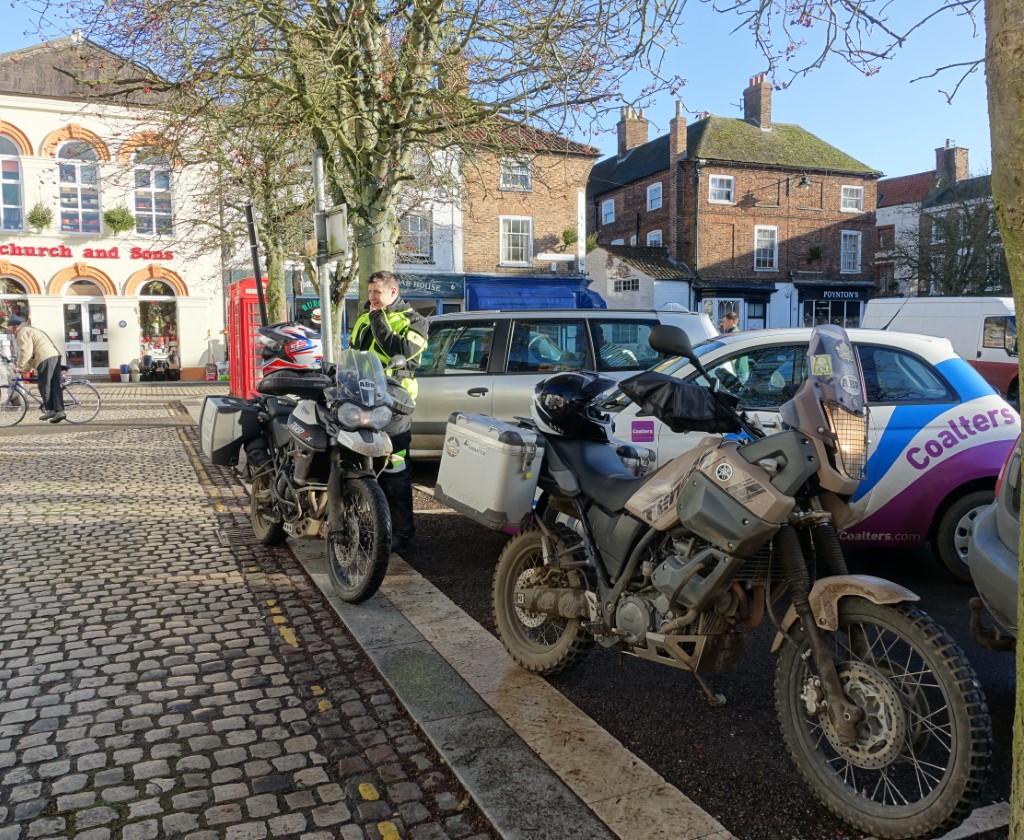 While Lincolnshire may not be the first place that comes to mind when you think of the UK’s best motorcycling counties, there’s no denying that the varying terrain of the Wolds and Fens, coupled with the rich Norse history and beautiful architecture of the many ancient abbeys makes it an exciting and intriguing place to ride and explore. 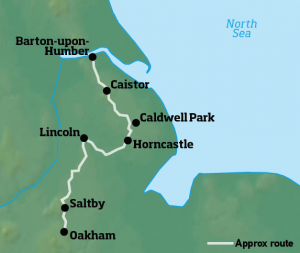 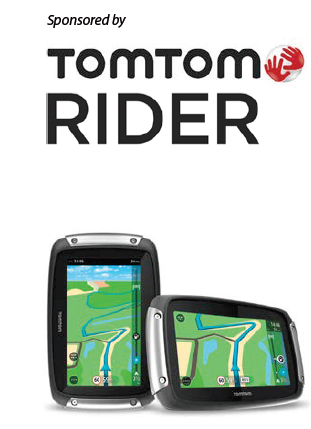