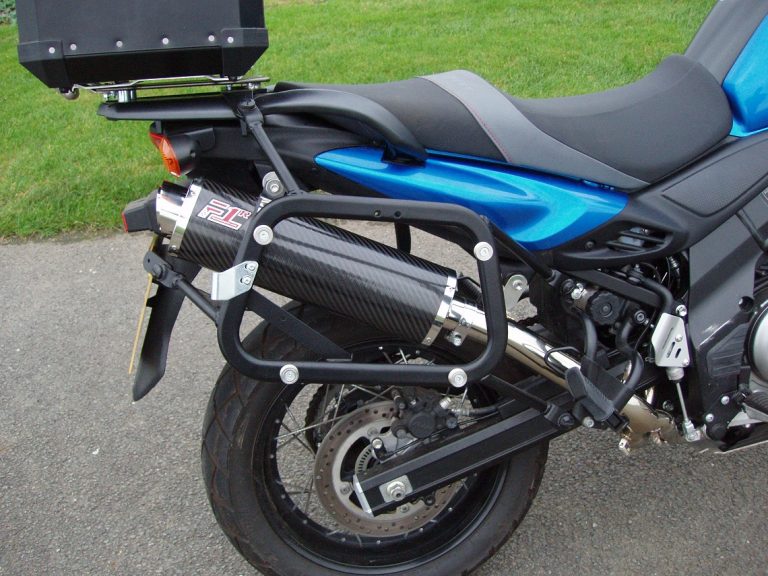 With storms battering the UK, Dave Reynolds locks himself in the shed to fit a new exhaust system to the ABR V-Strom 650XT…

As the weather has been a little poor lately, with extremely strong winds and rain battering much of the country, I decided to spend a little time in the workshop fettling. Fuel Exhausts had kindly sent us one of their products to fit the Strom XT, the F1R Road Exhaust, which retails at £246.99.

The first thing to do was unpack the components. It was very well packed, coming with a complimentary Fuel Exhausts neck scarf and a bar of Kendal mountain cake. I laid them out and checked everything was there.

The Strom has quite a complicated exhaust and it’s not the relatively simple job of just replacing the silencer as on many bikes.

With the beast upon the workbench, I had a nose around to see how the old system came off. It’s always best not to undo the wrong nut or bolt and see oil dribbling or springs flying into the dark recesses of the shed.

There was quite a bit of dismantling to do, which included removing the bash plate and front downpipe. Eventually, I won the battle and the old system was laid out on the floor.

This job was made so much easier on a bench, and trying to do it scrambling about on the floor would have been a real nightmare and would take a lot longer. A local bike shop said they would charge two hours of labour at £40 per hour plus VAT to fit the exhaust.

That may be a better option if you’re not confident in your mechanical ability.

After a deserved cuppa and biscuit I started the reassembly.

I like to assemble loosely first, just to make sure I’ve got it right and all the parts fit, no worries there, the Fuel Exhausts system is a precision-made top quality product, which is completely manufactured in the UK.

Onto the final assembly and to tighten all the nuts and bolts supplied with the kit. I had a couple of nuts and bolts and the odd washer left over for some reason. Whether that’s because Fuel Exhausts add a few extras or the flaming thing is gonna drop off in some far-flung place I’ll let you know.

After manhandling the beast off the bench and onto the drive it was time to fire it up. It sounds great, the main difference being that it’s raspier than the standard kit.

After getting suited and booted I set off on a test ride, the bike felt more responsive from the start, crisper, as if a few horses had been added.

Sure it’s a little louder, but I’ll ask someone to follow me to find if it’s acceptable.

I weighed the old system at eight kilos, the F1R Road Exhaust comes in at half that so a good weight saving to help the mpg figure. Who am I kidding, it’ll be lower gears and more revs to hear that bark!

Right job done now it’s off into the house to put plasters on my knuckles.