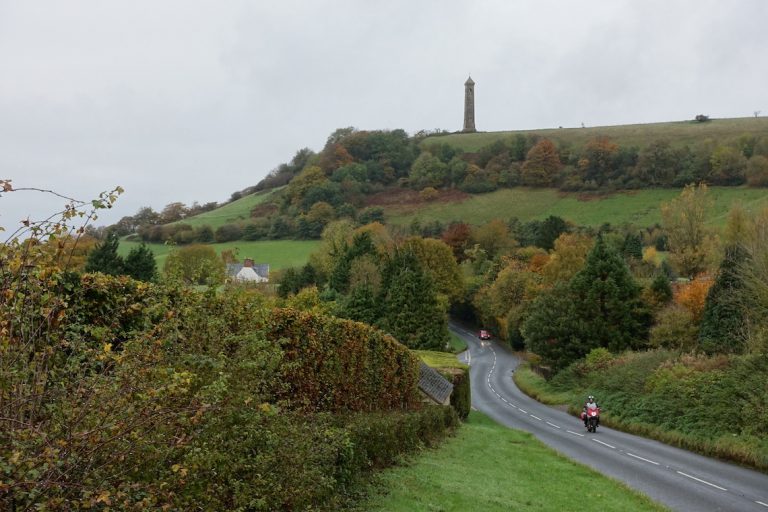 The Cotswold Way stretches for 102 miles through some of England’s most visually stunning scenery, Bryn Davies details the exciting route that encompasses everything we love about Britain

Throughout England, Wales and Northern Ireland there are 46 Areas of Outstanding Natural Beauty (AONB), and this number rises to 86 if you include Scotland’s National Scenic Areas. Each one of these specially designated pieces of land is home to the UK’s most charming landscapes that are either too small or lacking in wildness to be National Parks, and the sheer number of them represents just how scenically stunning our islands are.

The smallest of these areas is the Isles of Scilly, a small archipelago off the southwestern coast of Cornwall that’s just 6.2sq miles in area, while the largest is the Cotswolds in south-central England at 787sq miles. It is here that we decided to travel for this issue’s instalment of Great Britain, to ride the 102-mile long Cotswold Way. 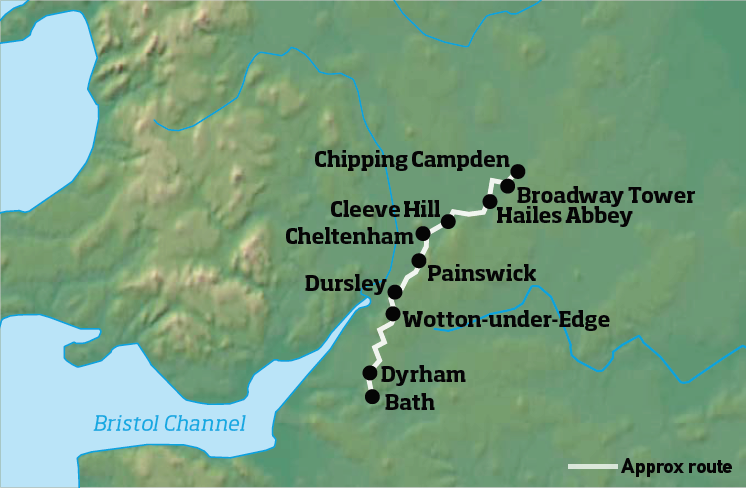 The Cotswold Way was officially opened as a long-distance trail in 2007, though the idea for the route was proposed in 1950 by the Ramblers of Gloucestershire. The path roughly follows the Cotswold Edge, rising and falling as it takes you along the broken escarpment from the historical city of Bath to the picturesque market town of Chipping Campden.

While walking the Cotswold Way would take you about one week, from the saddle of a motorcycle you’re able to experience the beauty and magic of the area in a single day, riding the perfect mixture of hidden single-track roads, exciting B-roads and fast-flowing A-roads for 78 miles.

Our journey began in Bath on a sodden, gloomy Thursday morning. Having never visited the city before I was in awe at just how beautiful the place was, despite the rain hammering down. The signature Cotswold stone has a remarkable talent for looking bright, cheerful and warming in the summer sun, but on a wet day in autumn it takes on an atmospheric, Gothic feel.

The Cotswold Way begins (or ends, depending on which way you decide to do it) at the Abbey Church of Saint Peter and Saint Paul in the city centre, and so after a quick coffee in the old Benedictine monastery’s shadow, we headed off on what promised to be a remarkable route that would take our minds off the miserable riding conditions.

Sure enough, after negotiating a route through the gridlocked streets of Bath we began our climb out of the city on the A46. Within minutes the road begins to twist and turn and you’re treated to the sight of the city nestled between the hills below you. It’s tempting to keep riding along the A46 after you’ve passed through the village of Pennsylvania but our route has us leave the road via a left turn towards Dyrham, home to the National Trust owned Dyrham Park.

It isn’t long before the road narrows and the views ahead of you open out to reveal the Avon Valley, with Bristol and the Severn Bridges visible on a clear day. As fate would have it, all we could make out was the haze of more intense rain that was making its way towards us, so we continued on, looping back across the A46 and to Tormarton.

After riding through Tormarton you once again join the A46, travelling onwards through Petty France and Dunkirk. While there’s not much of note in the small hamlets that hug the road, Jane Austen acknowledged this in her novel Northanger Abbey (1817), when she wrote, “there was nothing to be done but to eat without being hungry, and to loiter without anything to see”. While Jane’s words may well be true, the novelty of riding through the place raises a smile before turning left on to France Lane.

These next sections take you through a series of pretty little villages, Hawkesbury Upton, Hillesley and Wortley, as you ride a B-road that’s enshrouded by tall hedgerows. As you pass through Hawkesbury the Somerset Monument, a large tower built in 1846 to commemorate General Lord Edward Somerset, surprises you as it seems to appear out of nowhere.

Every so often a break in the foliage will reveal more stunning views of the valley below and as you approach Wotton-under-Edge the scenery opens out, with the old market town sitting gorgeously below, flanked by Wotton Hill and Tor Hill. Dotted around the town are reminders of the fascinating history of Britain, the church of St. Mary the Virgin was consecrated in 1283 and the Ancient Ram Inn, which is said to be one of the most haunted houses in the UK, dates back as far as 1145.

After taking some time to explore, head out of town via the B4060. The ride is enjoyable and the views get better and better as you ascend up the side of Wotton Hill. Sat on top of the hill is a collection of trees that were planted in the 19th Century to commemorate the Battle of Waterloo, and this location was also the site that housed an early warning beacon that was used to warn of the approach of the Spanish Armada in 1588.

Continuing onwards to North Nibley you’ll be overlooked by the William Tyndale Monument, which looks similar to the Somerset Monument you passed a few miles south. This tower was built in 1866 to honour William Tyndale, a translator of the New Testament who was born in North Nibley.

Tyndale was martyred when he was strangled and burned at the stake for heresy.

After turning off the B4060 the route follows single-track lanes past the Breakheart Quarry before joining the A4135 and B4058. The county of Gloucestershire sprawls out around you as the pleasant ride takes you into Nympsfield, home of the Bristol and Gloucestershire Gliding Club and the neolithic long barrow known as Hetty Pegler’s Tump.

The ride from here to Stroud is nothing short of fantastic, the exciting B road twisting and turning through the heavily wooded hills before you reach Selsley Common, a 97-acre Site of Special Scientific Interest. As you approach the common beware of the cattle grid across the road, it comes out of nowhere and if hit at speed and an angle you get a bit of slide.

It’s just a short ride from Selsley Common, where it’s not unusual for cows to meander across the road with a complete disregard for traffic, to the historic town of Stroud. For the most part Stroud is a beautiful display of architecture, though it’s hard to ignore the more recent contributions to the town’s buildings, mainly the grotesque offices that now sit empty, scarring the otherwise beautiful streets.

Our route takes us in and out of Stroud in an instant, crossing the western outskirts and heading towards Randwick before snaking along a mixture of single-track and B-roads to Birdlip. It is on this short section of our journey that we rode what is now one of my favourite stretches of tarmac, Buckholt Road.

As you turn off the A46 the road narrows slightly as it cuts out a line through the thick canopy. For two and a half miles you’re at one with your bike as the gentle turns allow you to get into a mesmeric rhythm. When ridden in Autumn the colours of the surrounding woodland are spectacular, though I expect it’s equally as perfect in the other seasons.

The road from Birdlip takes us through the outskirts of Cheltenham, though if you’d rather avoid the traffic that inevitably accompanies city riding head northeast and pick up the route again in Winchcombe. If you decide to venture into the streets of Cheltenham’s housing estates then you’ll be rewarded with a fantastic climb up Cleeve Hill, the highest hill in the Cotswolds.

The right-hand side of the road is lined with houses that command views as far west as the Brecon Beacons and there’s one particularly lovely looking nursing home that I hope my kids put me in when they decide they’ve had enough of me.

From Cleeve Hill there’s just 18 miles of the route left, through the delightful town of Winchcombe with its beautiful high street, and Hailes, the site of the ruins of Hailes Abbey. The abbey was founded in 1245 by Richard, Earl of Cornwall, who built the abbey as a way to thank God after he had survived a shipwreck. Once the abbey was a grand building which attracted pilgrims from across Europe, though now all that remains are a few arches and the outline of the building in the grass.

We stayed at Hailes Abbey for a few moments and then pressed on towards Broadway, the penultimate town of the Cotswold Way ride. Broadway is a beautiful place that fulfils expectations of how Cotswold towns should be. The high street is lined with buildings made from the trademark yellow limestone and it’s the perfect place to stop for a coffee.

You won’t want to stop for too long though, as the only barrier between Broadway and the finishing point in Chipping Campden is Fish Hill, a fantastic stretch of road which incorporates three bends that wouldn’t be out of place on an Alpine pass. While it may only be just three miles long you’ll want to ride it again and again before pressing on past Broadway Tower and into Chipping Campden where the route ends.

Standing in Chipping Campden, dripping wet and shivering from the cold we realised that the ride we had just completed had taken our mind off the foul weather completely. There wasn’t one bad section of this journey, and the 78-mile route managed to pack in just about everything we love about motorcycling – fantastic views, exciting roads, fascinating history and a sense of adventure in one of the most beautiful parts of the UK.

While riding the Cotswold Way you’re never too far from civilisation and as such there are many places to stop for a bite to eat and a coffee. Stroud is a good place to stop for a halfway sandwich in one of the town’s many independent cafes, and Broadway Tower has a very nice coffee shop on site where you can sit and look out over fantastic views.

When it comes to accommodation you’re not going to be short of choice. The route takes less than a day, so you’ll either want to stay in Bath or around Chipping Campden, both areas are hot tourist spots so have adequate hotels and b&bs.