Riding with the dead 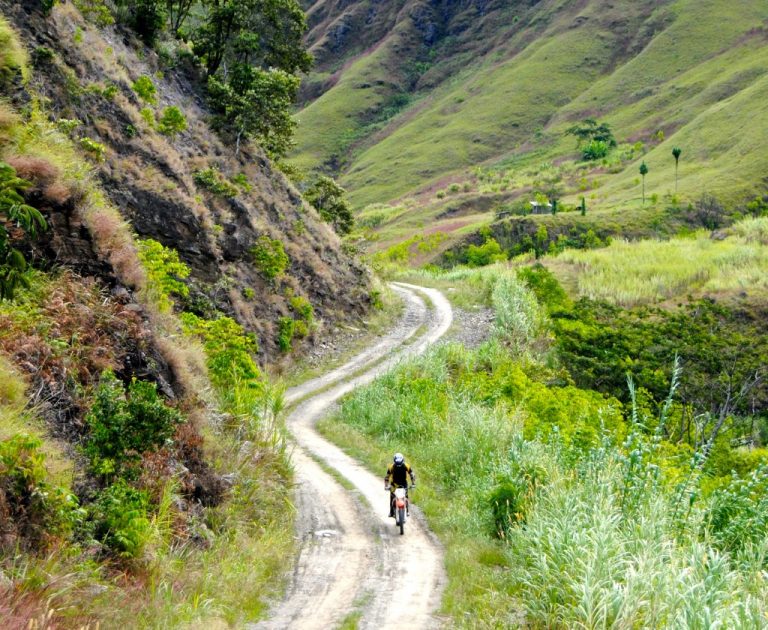 Following in the footsteps of his childhood hero, Ian Neubauer heads to Papua New Guinea to discover the smoked corpses of the country’s highlands…

Back in the 1980s there was this guy on TV, an intrepid Aussie explorer by the name of Alby Mangles who travelled to the most remote and exotic places on earth. In one episode, he visited a place called Aseki in the highlands of Papua New Guinea (PNG), where instead of burying their dead, villagers smoked them in longhouses and assembled them in life-like positions in shrines in the jungle.

Alby’s footage of the shrivelled, ghoul-like corpses made a lasting impression on my macabre young mind and I dreamed of following in Alby’s footsteps. So when work took me to PNG in June, I factored a visit to Aseki into the equation. But unlike old Alby, who used a big 4X4, I upped the ante and found a guide who said he could take me to Aseki on a motorcycle.

My journey begins in Lae, a city on the east coast of PNG where I rendezvous with my guide, Malcolm Gauthier of Niugini Dirt. A mixed-race New Guinean-Canadian who grew up on a mission his family founded in the country’s highlands. Malcolm has the street smarts to handle the challenges of riding in PNG plus the Western savvy needed to take care of, and entertain, tourists like me. “I could move to Canada if I wanted to,” he says, “but everything’s been done there. PNG is still developing and any business you open, a fishing charter, a motorbike company, even a mechanical workshop, becomes an overnight success so long as you have good management skills.”

We plan to shoot off early in the morning on the day after I arrive. But it’s the middle of the rainy season and when a tropical downpour sets in, we have no choice but to wait. So it’s just short of midday when we finally head out of town on the Okuk Highway.

The Okuk is in a terrible state, riddled with thousands of hard-edged, slime-filled potholes that slow traffic to about 6mph. The conditions make commuters sitting ducks for PNG’s notorious ‘raskol’ highway gangs who simply walk up to vehicles and hold people up using bush knives or homemade guns. But the raskols can’t touch us, we’re too fast on our KTMs.

About 12 miles out of Lae, we turn left onto a dirt road that transports us from hellish border town to an idyllic rural scene backdropped by blue-grey mountains. It leads to a one-lane steel bridge that crosses the caramel-coloured Markham River and then detours along its left bank.

A second left turn takes us onto a fire trail that cuts deep into the mist-shrouded jungle without a soul in site. Malcolm lets me ride upfront and set the pace which, given the size of the ruts and bogs, rarely surpasses 25mph. It’s a hard going but good fun and within a short amount of time we’re covered from head to toe in gooey, lukewarm mud. The river crossings are a blast, though less so for Malcolm who has to waddle in first to ensure they’re shallow enough to ride across. 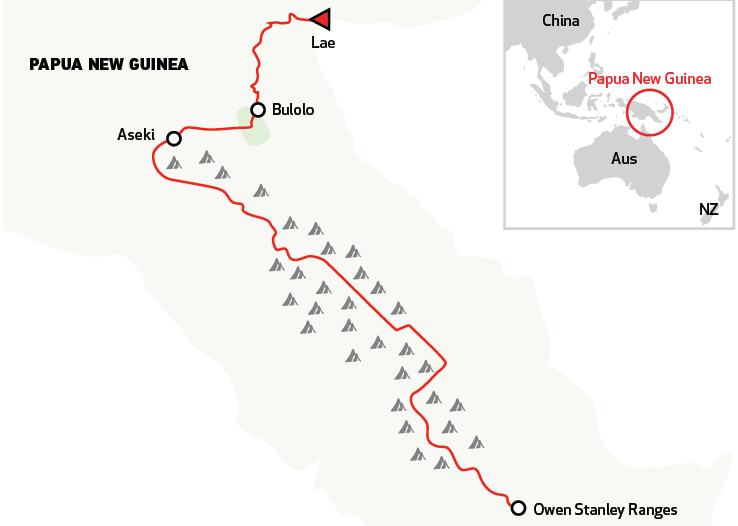 Two hours later we enter a velvet-green valley where we see signs of human life: an old woman walking bent under a large pile of kindling, a farmer using a bush knife to clear a patch of jungle, men panning for gold in a river bed and kids kicking a can around the road.

As we stop at the next river crossing, a woman with red rotten teeth, the result of chewing the narcotic betel nut, offers me a bunch of bananas. I pull my wallet out to give her a few bucks, but Malcolm tells me it’s not necessary; that it’s their custom to gift fruit to passers-by so they can brag about it to their mates. I try giving her a 5 kina note all the same but she refuses to accept it and walks away giggling. That’s the contradictory nature of PNG. In the cities many people have to steal to survive. Yet up here in the mountains, where people have no money but everything they need, people are generous and life is pretty peachy.

To the golf club

The further inland we travel, the narrower the valley becomes and soon we find ourselves riding along a track that hugs the side of a steep ravine. Gulleys that cut down the face of the ravine turn into waterfalls that spill onto the road before pouring into a raging river far below. I pull over on several occasions to snap a few pics until Malcolm suggests we pick up the pace.

The river morphs into a delta at the end of the ravine, he explains, and the only way across will be to put our bikes into the back of a flatbed truck. But the service only runs until around 5 pm. and if we miss the last truck we’ll have to spend the night on the floor of whatever hut we can find.

We press on and make good time, but in my haste I stack it on a muddy incline. The fall isn’t bad and I recover in a flash, but a few minutes later my clutch stops working. The chamber that holds the clutch’s hydraulic fluid copped a micro-fracture in the fall and we have to stop to refill it every 15 minutes or so. By the time we reach the delta it’s well past five and the flatbed truck is nowhere to be seen.

We’re just about to turn around and head back to the nearest village when Malcolm spots a couple of fishermen in dugout canoes. He calls them over and strikes up a deal for them to ferry us, and our bikes, across the delta. It takes four men to lift the bikes into the canoes, and the commotion attracts hundreds of villagers. They cheer and whoop as we take off in a scene that could’ve been cut straight out of Alby Mangle’s old TV show.

The canoes are remarkably sturdy and have an elevated platform where I comfortably stretch out. I look up at the sky, crimson and lilac in colour, streaked with wispy white clouds and embers of the coming sunset. Yesterday I was in a taxi battling my way through rush hour traffic on the way to the airport. Today I’m crossing a delta in a dugout paddled by a descendent of a head hunter, with a motorcycle in the luggage compartment.

After reaching the other side we scoot along a paved road that leads to a town called Bulolo. In the 1930s Bulolo was the site of PNG’s biggest gold rush, and lots of pine trees were planted to provide timber to build houses around the mine. Once extracted, the gold couldn’t be replaced, but pine can be replanted again and again.

Today Bulolo is home to one of the country’s most successful sustainable logging businesses that provides jobs for 1,500 workers. They live with their families in a gated community on the edge of town with a nine-hole golf course in its centre. The clubhouse has a large balcony overlooking the links, where Malcolm and I order a couple of T-bone steaks. We wash them down with a few South Pacific lagers and spend the night resting in cosy log cabins.

It’s a 60-mile sprint from Bulolo to Aseki. The first half of the ride cuts through vast pine plantations before it opens up to reveal a valley at the base of the Owen Stanley Ranges. The Owens are home to the infamous Kokoda Track, which saw many skirmishes between Australian soldiers with their New Guinean porters, and Japanese marines during World War 2. Today the Kokoda Track is a war pilgrimage destination that attracts 3,000 Aussie tourists every year who pay homage to those who made the ultimate sacrifice in the battle against tyranny.

The road drops like a bomb into a massive valley and then rises like a phoenix through a series of switchbacks. We pass dozens of villages where people race out to cheer and wave hello, not just children but also adults and elders, too. I’ve ridden motorbikes all over the world, but nowhere have I seen the kind of reception riders receive in PNG. “Up him!” they yell, making the universal sign for a wheelie, cheering like football hooligans every time we indulge them.

It takes us four hours to reach Angapenga, the village in Aseki Province where Alby filmed the corpses three decades ago. There we pick up a guy called Dickson who is the custodian of the jungle shrine. He directs us to a small clearing about three miles past the village where we park our bikes and leave our jackets and helmets behind.

It’s a half hour slog through the jungle to the smoked corpses, during which I ask Dickson a million different questions. He doesn’t know when or how the custom of smoking corpses began, only that Christian missionaries put a stop to it sometime after WW2.

The corpses are laid out along a ledge under a cliff to watch over and protect the village. They’re even more gruesome than I ever imagined, arranged in life-like postures or foetal positions in bamboo frames. There are 14 adults and one infant that’s cradled under its mother’s chest, sucking the parched remains of muscle and skin clinging to the adult skeleton.

Dickson points to a corpse that he says is his great-grandfather. When I ask what his name was, he says he doesn’t know, and I figure he’s just telling me a bunch of Chinese whispers.

He then picks up what looks like a leg bone from the dirt and poses while I photograph him.

It’s been an incredible journey to one of the most bizarre places on earth, and I still have the ride back to Lae look forward to. When I get back home I’m going to download old Alby’s TV show and look for a new destination to ride. I’m sure he’ll have a good list to choose from.

Want to ride Papua New Guinea? Here’s how you can…

Language
English/Tok Pisin and 800 other languages

Security
PNG is a poverty-struck, crime-riddled nation. wondering out at night or getting hammered with strangers is not advised. But at the same time New Guineans are wonderful, generous and intelligent people. Show them respect and you’ll get it back. Screw them over, steal their pigs or women, and you’ll start a blood feud that can go on for generations.

Where to go
More sights and activities –

When To Go
PNG has a tropical monsoon climate and rain patterns are unpredictable, though august to October generally has cooler, drier weather. February to May is also a good time to visit.

Foods To Try
Staples of the traditional New Guinean diet include fresh seafood, pork, pungent tinned meats and fish, sago, sweet potato, taro, taro leaf, cassava, cassava leaf, breadfruit, edible leafy greens (kumu), coconut and fruits. However, eating local foods can give you the runs so we suggest sticking to restaurants and bars catering to westerners: greasy but wholesome pub food is the equivalent of fine dining in PNG.