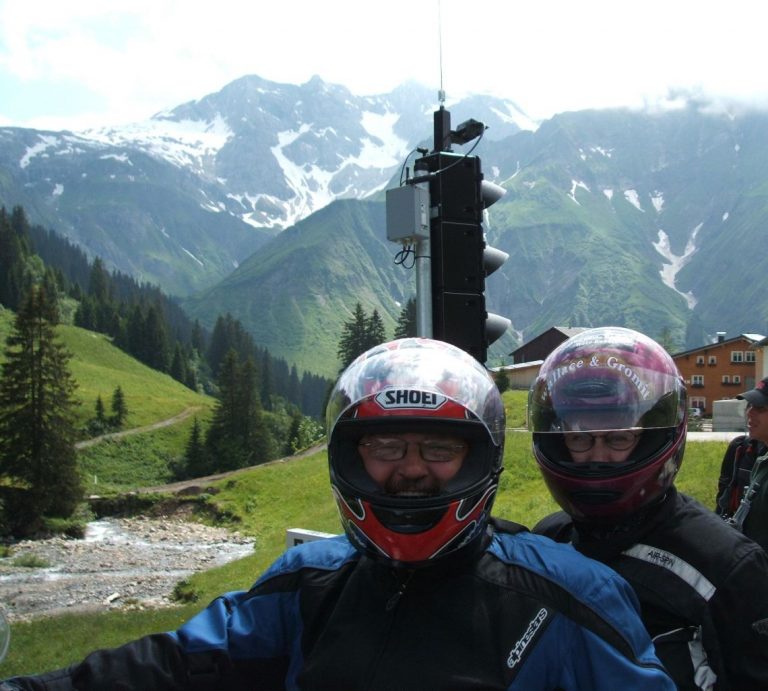 In ABR21 we offered the chance to win a SPOT tracking device by asking people to write in with why they needed one. We had some great entries, with a round-up of the best printed below. The winner is announced at the end…

Just thought I would let you know about a trip I’ve planned through Europe with myself and my girlfriend Sharon.

We are setting off on our Yamaha Super Ténéré from Wigan on Friday 23rd May 2014 and catching the ferry to Zeebrugge.

We are then travelling through Belgium, to Germany visiting the famous ‘Dambusters’ dams.

On through the Czech Republic, Austria, Hungary into Romania (visiting Dracula’s Bran castle) and then riding the famous Transfagarasen Highway, onward into Serbia, Croatia, Slovenia, Italy, Switzerland and then ride over to Arromanches in France to the D-Day beaches for the 6th June to celebrate the 70th anniversary of the landings.

We will travel back to Zeebrugge for the 7th June to catch the ferry home.

The tracker will be great for friends and family to track our progress and hopefully, if I do happen to win it then I am planning on a far bigger trip for much longer, and far bigger distances.

I’m off to Mongolia on 3rd May for a 16,000-mile round trip taking about two months, riding through 20 Countries including Iran, Kazakhstan and Russia.

With limited or no communications the SPOT would be a great way for friends and family back home (or even you guys?) to track our progress! What do you think?

I thought that I would enter this competition as the tracker would help allay a lot of the fears that Maria has when I go away, especially for my next adventure.

In January I had decided to start planning for my next adventure and at first my thoughts were a ride to India to visit the orphanage we support.

However, circumstances have changed with a new job looming and financial restrictions.

I have therefore made plans to travel east through Turkey and my plan is to circumnavigate the Black Sea.

From Turkey, I will ride north through Georgia into Russia before heading toward Crimea and the Ukraine where we have friends. From there it’s a nice ride home through either Slovakia or Hungary a trip of around 5,500 miles, a nice three-week adventure.

I had planned this route before everything kicked off in Ukraine, but I reckon by spring 2015 things will have calmed down enough to just make it interesting.

Recently my wife, Lesley, has been getting progressively unwell, causing a pause in our adventures together.

When we did our three-year lap of the planet we got to Southeast Asia and had to ship our bike from Malaysia to Turkey from where we rode home.

This missing chunk has been bugging me ever since. So I’m now planning the ‘Unfinished business tour’.

Norfolk, England to India via Europe to Turkey, Iran, Pakistan and to India, leaving this year July/August time.

Unfortunately, Les doesn’t feel up to this long ride and is staying at home manning the ‘mission control’!

I will miss her as we have been married for 35 years, and literally joined at the hip during all our adventures.

But what better way to keep in touch if I had a tracking device on the bike, then she could be in her rightful place with me, following every mile of the adventure from the UK.

My wife and I will be making the trip we have been talking about since 1991.

We will jet out to Seattle on 12 July, pick up the bike (air Freight from Manchester), then make our way to Vancouver via Spokane, Calgary, Banff and Jasper.

From Vancouver, we will make our way to Whitehorse capital of Yukon where our son now lives, planning on staying for two weeks.

From Whitehorse we will meander across Alberta, then Saskatchewan and Manitoba (the flat bits) then Ontario (visit relatives), through Quebec and into New Brunswick.

Having headed down into Nova Scotia, we plan to take a ferry across to Newfoundland and Labrador, riding from one end to the other.

We’ll make our way around the coast to the Bay of Fundy for a bit of whale watching and back to St John, New Brunswick, before pushing down through Maine, New Hampshire, Massachusetts, Rhode Island, Connecticut and down into New York, where we’ll drop the bike off at the freight terminal after approximately 11,500 miles and fly back to Manchester, tired and happy.

We will be camping in some remote locations so will need some way of letting our family and friends track our journey, and hopefully, reassure them (by not pressing the SOS button) that we haven’t been eaten by wolves or bears!

My name is Arthur Potokar and I was reading your magazine when I saw the SPOT competition.

I thought it was a great idea and thought I should enter. My dad is the founder of a charity called Interburns and my mum works for them as well.

A couple of years ago we spent three months in India, where me and my brother got really into the bikes there and I used to get to go on some of them with my dad.

We wanted to do something to try and raise money for Interburns and so decided to do a fundraising motorbike trip. We are going to do a trip later on this year in October on Royal Enfield Desert Storms.

We are going to start the trip in Kathmandu, Nepal and go to Dakar, Bangladesh.

On our way, I thought the SPOT would a great way for me and my brothers friends to see where we are on our journey.

We will be travelling from Nepal through a remote part of India in the jungle, then on through Calcutta and across the border to Bangladesh, so plenty of chance to get lost, especially as we aren’t going to use sat-nav, only ordinary maps – if we had the SPOT at least someone might find us eventually!

We are also going to be making a documentary film – so it’s going to be great fun as well!

PS I’m using my dad’s email ’cause I haven’t got one!

AND THE WINNER IS…

An impossible one to judge as ideally everyone who entered would be given a SPOT, but to pick a winner we’ve gone for Nick and Lesley, allowing Lesley to keep up to date with Nick’s progress out on the road. Safe travels to all those that entered.