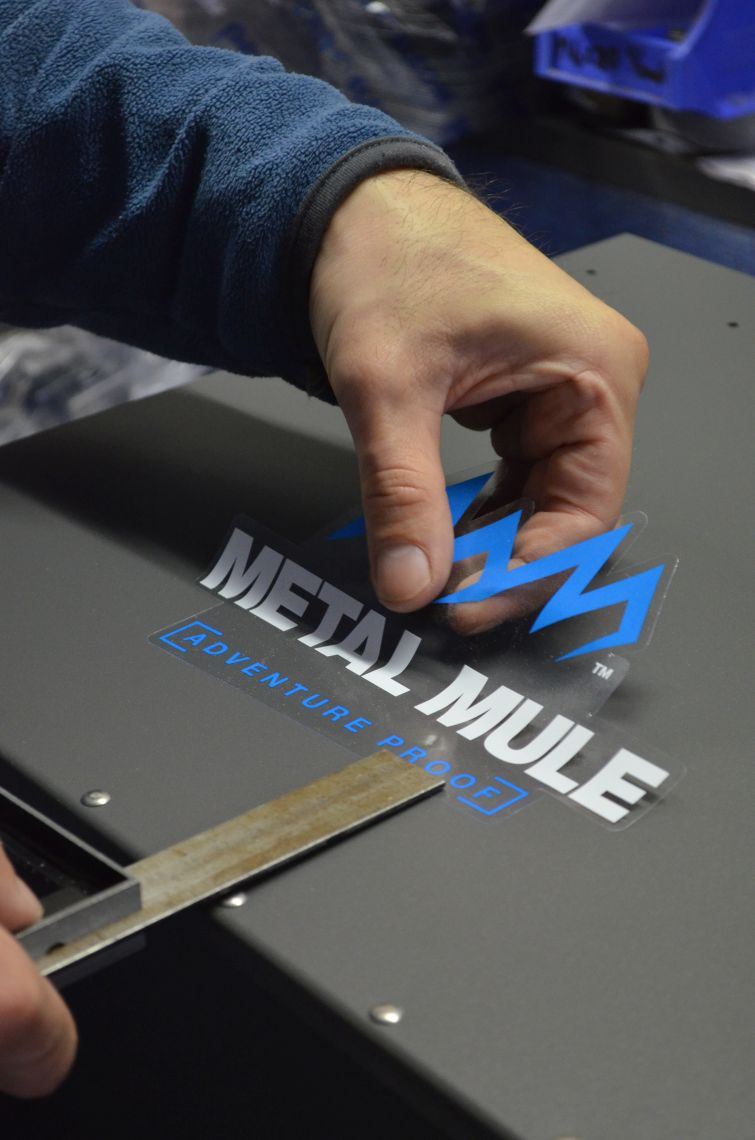 We head down to Brighton, to the premises of Metal Mule, for our first look into the world of metal panniers

Metal Mule has been one of the kings of pannier making for the past few years. The company has built its reputation on the quality of the product and the attention to detail.

They aren’t the cheapest panniers on the market, not far short of £1,500 for two panniers and rack, but for anyone demanding the best, this is usually the ﬁrst port of call.

Julie and Kevin Sanders, operators of round the world organised tour company GlobeBusters, have tried other makes and always come back to the Mule.

They are well built, watertight, and equipped with a very useful and convenient quick release system that can be used with one hand.

To look at it from the outside you would think this is a multi-million-pound operation with high tech facilities and a bank of machines to do the job. Instead, Metal Mule HQ is a barn down in Hassocks, West Sussex, not far from Brighton.

The company was set up by Paul Goulding, a traveller himself who completed a number of big trips back in the nineties, with it during those adventures that he decided that there must be a better system for carrying his gear in. 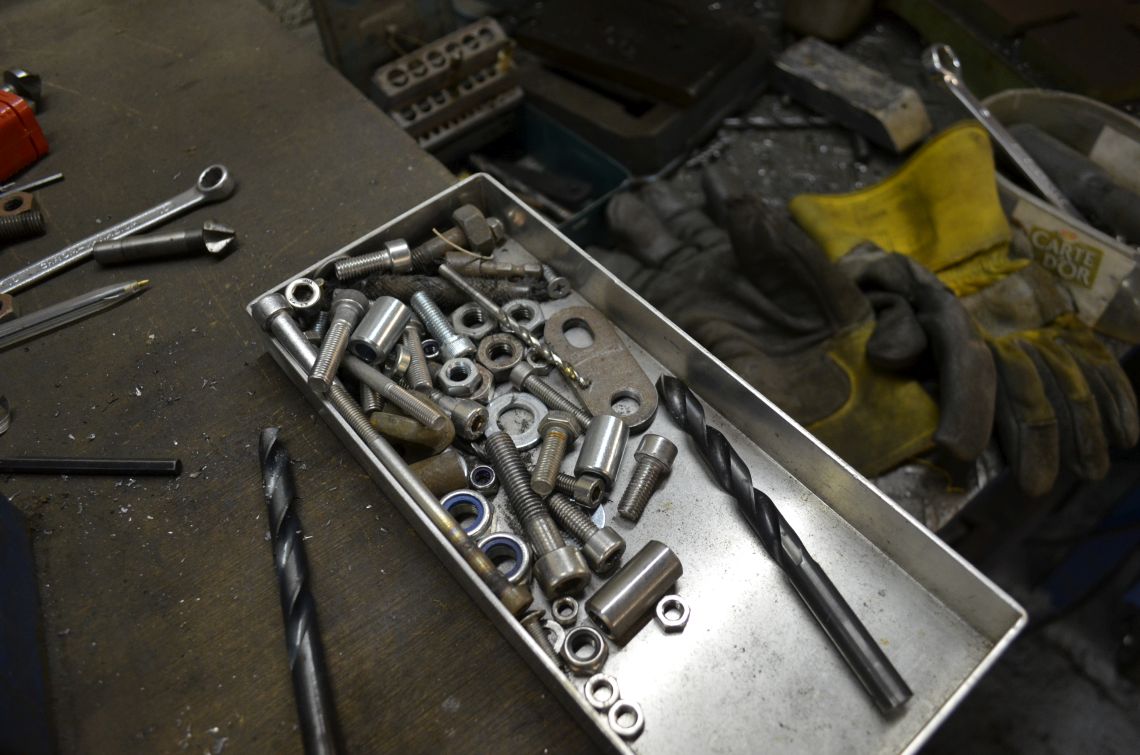 Involved in agriculture by trade, Paul devised a system and had someone fabricate it, with the very ﬁrst Metal Mule displayed over the next page.

What led us to the Metal Mule workshop was the recent launch of the new Ute pannier, a more affordable option than the regular Max, it forgoing the handles on the top and on the sides, and using a more simple fastening system to the pannier racks; effectively just two threads with wheel nuts on the inside of the pannier – midway down – which in truth do rob the pannier of some of the practicality that made the regular Metal Mules so desirable in the ﬁrst place.

Also different is the silicon seal on the inside of the lid, replaced with regular foam which won’t match the longevity of the blue silicon seal.

That said, for the ﬁrst time a Metal Mule pannier comes in at well below a thousand pounds, with it interesting to note that despite this, the majority of customers still go for top-spec model.

If nothing else this tells us something about the adventure bike market, and the money people are prepared to pay for equipment they can rely on.

The strength of the Mule comes from the absence of welding. Instead, the base and the two half-shells of the side walls are pressed 2mm aluminium, pop-riveted together using solid rivets, Paul certain that they are a stronger option than welding; ‘You don’t see welds on a plane,’ he suggests.

The real intrigue for us was the man making them, a Mr Vladimir Keselak, who for the past four years has personally assembled every single Metal Mule pannier sold, really putting a face to the product and him doing it with a real pride that he was helping travellers, in his own small way, live out their dreams. It was fascinating to see him work and watch the panniers take shape.

In recent months, Metal Mule has entered into a partnership with the producer of sports and touring bike accessories Renntec, a few hours along the coast.

Metal Mule still exists as a trading name, and Paul is still very much involved with the business.

What it means is that Metal Mule now has access to a much bigger facility and tooling, allowing the brand to expand and make use of greater economies of scale.

Having taken a tour of the Metal Mule premises over in West Sussex, we rode over to Renntec in Dorset to have a look around there, finding in the workshop a KTM 1190 Adventure R (not the same one as featured elsewhere in this issue) being measured up and kitted out with a racking system ready to go to market.

It was interesting to see this stage of development, Andy, the technician, working out the best way of getting the panniers to sit right and integrate with the design of the bike.

Unlike other pannier manufacturers, Metal Mule go the extra lengths to overcome the lopsidedness you can often get with hard panniers, where a protruding exhaust forces one pannier to stick out further than the other, or one pannier to be smaller than the other, or, as some manufactures such as Jesse do, cutting a recess into the pannier, to make it mould around the exhaust, and in doing so rob the pannier of much-needed space.

Metal Mule’s solution is to design the exhaust around the pannier.

They do this by removing the muffler, shaping and designing the pannier frame so that it is perfectly symmetrical, and then sending it all off to British exhaust manufacturer Scorpion who customise the pipework and fit one of their own slimmer cans, to tuck the exhaust in the gap left by the pannier, the result being a perfectly balanced bike, with the same sized panniers on either side, and both sticking out to exactly the same lengths.

Of course, it’s not the cheapest option, bringing the complete package closer to £2,000, but what you get for that is a tailored design and a lot of care and attention.

Standard brackets will also be made, for those not wishing to buy the aftermarket exhaust, but the system won’t be balanced.

As for which bikes to work on next, it’s a case of picking the ones that people are likely going to want to fit hard panniers to, getting hold of a bike for fitting, and then making the system.

It’s either the V-Strom 1000 or the Aprilia Caponord next to receive the Metal Mule treatment.

Italian accessory manufacturer Givi has a new set of panniers out. They’re called the Trekker Outback and are made from 1.5mm aluminium and fitted with a fully removable lid.

They’re designed to give the look of the round the world traveller but retain the functionality and value for money of the rest of the Givi range.

We asked Givi if we could borrow a set, not to mention a rack for the bike, to see how easy it is to order a set of panniers from the internet, have them arrive and figure out how to fit them.

The first job was to remove the existing Suzuki pannier rack frame, requiring a socket set and a couple of Allen keys.

Taking photos as you go – in order to determine the sequence of reconstruction when reassembling – is useful, especially when spacers and different bolt types are used.

With both racks on the ground, it was a good time to compare them. The Suzuki’s feel a little more robust and better finished, something that matters when the panniers aren’t on to hide them. But the Givi’s racks are adequate.

A simple instruction sheet was included with the panniers, with it taking a little time to figure out the configuration.

A spot of hammer work was required to knock one of the struts into place, something that was annoying, but having spoken to another pannier maker recently it seems common for the subframe on any bike to suffer some intolerances from the factory, sometimes an allowance of 10mm for some manufacturers (mentioning no names), meaning that it might be likely for you to have to give your pannier racks a whack too.

What we liked about the pannier racks on the original Suzuki system was the quick release bolts, spring-loaded, requiring a push with a screwdriver, then a twist and the bolt would come out. They were functional and secure.

The Givi racks come with regular bolts, that whilst not as efficient, were still easy enough to fit with a couple of tools.

Once all bolted down and the rear rack put back on it was time to mount the panniers. The system works with a spring-loaded lever that you pull to release.

A coloured tab flicks between red and green to let you know when the panniers are firmly secured.

Once on, the panniers look purposeful, reminiscent of the Touratechs on the KTM 1190, coming, as they do, with handy loopholes on the top, and replaceable corners that can be screwed on and off.

The slight problem, as with many panniers fitted to bikes not originally designed for them, is that one side (the exhaust side) sticks out further than the other, but there’s not much you can do about that.

On the V-Strom, we fitted a 48-litre to the non-exhaust side, and a 37-litre pannier to the other, though the exhaust side still protruded further out than the other, giving a slightly unbalanced look, but again, there’s not really much you can do about it (the imbalance was less notable on an R1200 GS we later saw the panniers fitted to). 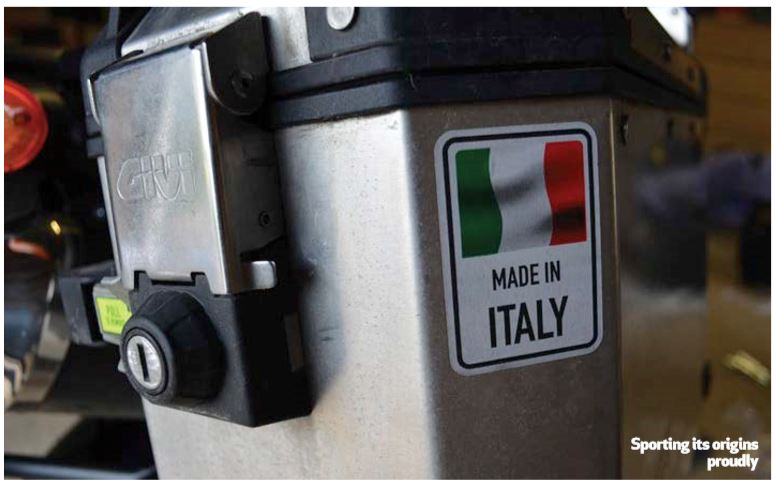 In summary, fitting panniers is a relatively easy task given that you have the right tools, whilst these Outback panniers are a good choice for the casual adventure bike rider.

For more information see the Givi website at; www.givi.co.uk

Not far from us, over on the outskirts of Birmingham, lie the headquarters of Stahlkoffer; a funny name given to a pannier company owned by a Brummie called Bernie, but it certainly does the trick of sounding suitably exotic.

Bernie started the company seven years ago having had enough of his previous career of teaching French as head of the department.

Bernie moved into the business of panniers and devised a very simple and robust design using 2mm aluminium, folded and then tig welded, attached to the bike with a simple pin system, soon to be replaced by a ‘quick release’ buckle meaning you won’t have to open the pannier lid to detach from the racks, a feature that is ideal when using the panniers in the rain, saving the contents from getting wet. 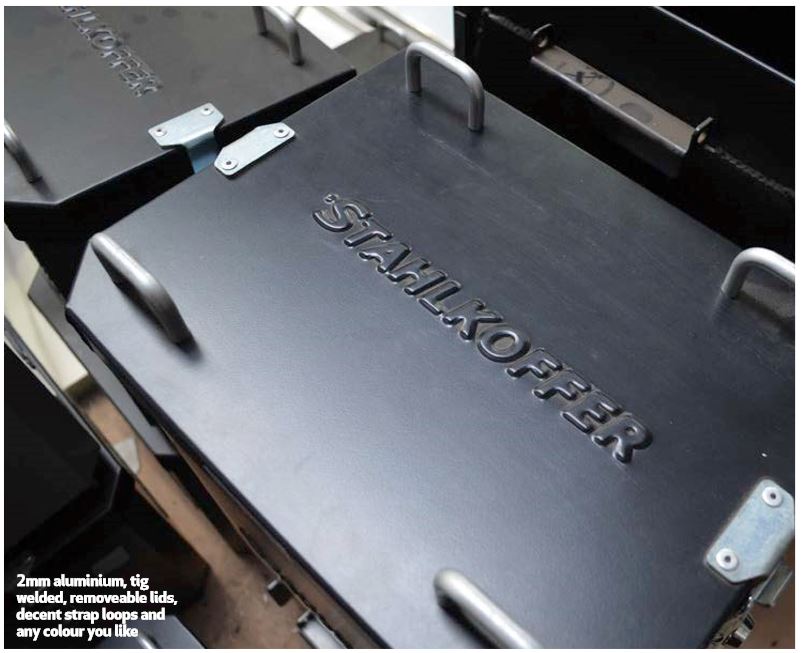 The frames are mild steel, sandblasted and plastic coated, using a universal hoop which has been known to take other makes of pannier as well.

Whilst those are the bread and butter, Bernie is able to tailor his racks to fit any bike brought down to the factory.

You can almost request to have the panniers powder coated any colour you like, and best of all there’s no extra cost for this, it’s just a flat fee of around £625 for the larger volume Stahlkoffer and £600 for the slightly slimmer CityKoffer. 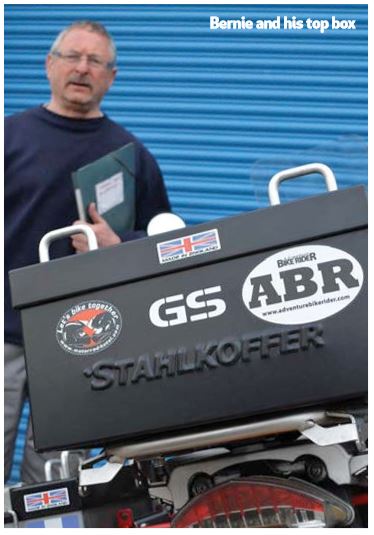 Unlike Metal Mule with its ‘balanced’ system, Bernie gets around the issue of protruding exhausts and such like by having a slightly slimmer pannier on that side.

He’s had people using his panniers on round the world trips and takes pride in them being an affordable, well-constructed bit of kit that isn’t out of the price range of most people.

A twelve-month warranty is provided, inner bags are available, and all fasteners are stainless steel.

The Stahlkoffers won’t win any awards for style, but they are a genuine solution to storage needs at the value end of the market.