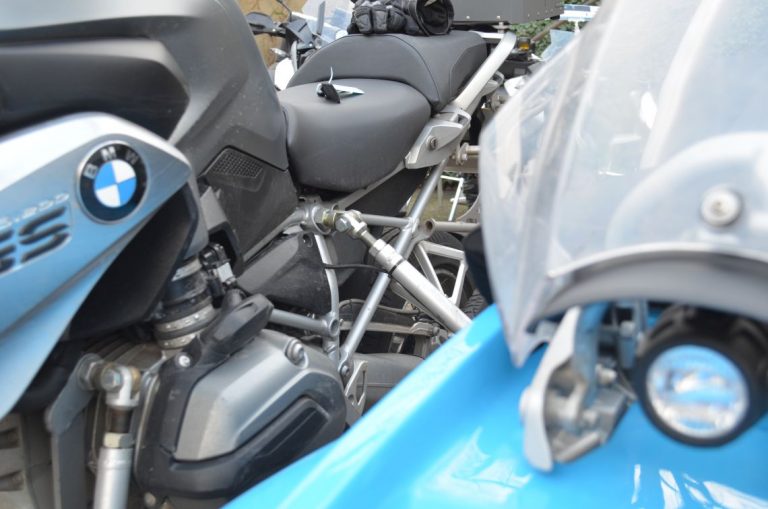 We get to grips with SBW’s sidecar creation…

Back in December at the NEC bike show in Birmingham, we, like many other attendees of the show, couldn’t help but notice the vivid blue sidecar parked on the corner of the Watsonian Squire stand.

The sidecar stood out mainly because it was attached to an equally vivid blue current model R1200 GS, the sidecar styled to mimic the look of the bike.

It was a crazy looking contraption, a weird marriage of old nostalgic three-wheeled action, and brand new high-end whizz-bang technology.

It was ridiculous and sublime, both in equal measure, but the interest in it was endless, with the bike and sidecar permanently surrounded by people taking photographs, and making genuine inquiries to Stephen Crowder, the man behind the project.

After the show, we spoke with Stephen, who just so happens to be the proprietor of SBW Motorrad, a BMW dealer in the Hertfordshire town of Hertford.

He explained how the sidecar had come about after a customer wishing to travel around the world with his wife, but wanting to do so in a sidecar, approached Stephen about the possibility of fitting one to the side of the latest generation water-cooled R1200 GS.

Stephen accepted the challenge and went about working with the customer to design and build the very first working prototype, and the bike the couple were ultimately going to take around the world.

Sadly, that trip never happened – as many trips often don’t – with the customer returning the sidecar unit to Stephen, who over time had begun to realise that just maybe there’s a demand for such a thing.

Keen to find out more ourselves we headed down to the dealership for a Q&A with Stephen Nicholas, the chap who helped put the thing together.

We also had a quick afternoon of training in order to get to grips with the £25k device (including the bike), and then, after that, we took the sidecar out for a week, racking up some 700 miles and really discovering what this three-wheeled business is all about…

When was the first one conceived?

The idea and discussion which the initial customer started in June 2011 How long to build the first one? The first sidecar fitted to a bike and ridden was in July 2012.

How many prototypes have there been?

Two. One RHD fitted to a bike, one LHD unmounted.

How many finished pods have you built so far?

How much do they sell for?

So it’s a Watsonian Squire cradle, the linking arms are made by a Dutch firm, and the shell is made where?

Watsonian builds the frame to our design and spec, as well as the link arms. EZS in Holland manufacture the additional brackets for the bike. We build the shell.

What materials are the cradle and linking arms made from?

Is it correct that the sidecar and bike tow in at the front, so their noses are slightly angled towards one another? If so, why?

The sidecar wheel and bike wheel do toe in. The bike does also have a slight lean outwards. These adjustments make turning easier, but one way more so than the other.

Is setting a sidecar up a science or an art?

There are lots written about how to set up a sidecar, but in reality, there is no exact science. It is to compromise and see if it feels right. The bike will drive completely differently depending on how it is loaded and best set up for how it will mainly be used.

How often do you need to recalibrate (set up) the sidecar, if at all?

Only for rider preference or usage change.

Is it correct that the rear brake on the bike operates the sidecar brake?

We hydraulically connect the bike’s rear brakes to the sidecar brake.

What’s the sidecar hub from?

The sidecar hub bearings, wheel carrier disc and caliper are from the GS. The hub itself is CNC’d by Harris Performance.

Where’s the sidecar shock from?

The sidecar was designed to take a GS rear shock. We currently use a Wilbur’s shock with a 50 percent softer spring rate than standard.

What are the biggest challenges making a GS work with a sidecar?

There are no major challenges.

Why is the GS a suitable bike for a sidecar?

Lack of external bodywork and having an external framework. Also, the telelever suspension helps keeps the sidecar composed as it is obviously less prone to dive under braking.

What’s the benefit of running it on car tyres?

How do you connect sidecar electrics to the bike?

Any problems with that? We retain all original connectors on the bike’s main loom and use the appropriate connectors to make a loom that terminates under the bike seat with two waterproof terminals in the sidecar loom that attaches there.

What other models could the sidecar be fitted to?

The sidecar was conceived to have all the looks of the 1200 GS, with frame angles to line up with the bike. There’s no reason it couldn’t be mounted to another bike though. We are currently building one for a customer to mount to his Moto Guzzi.

Who styled the original sidecar?

The idea started with several drawings by the original customer and Stephen Crowder. A desktop-sized model was built, then a full-size wooden model.

Tell us about Stephen and his background and why the sidecar is important to him?

Stephen has a background in architecture and a hobby in woodwork. He has worked in BMW car dealerships before motorcycles. I think creating something from scratch and seeing it through production to sold units has been something Stephen always wanted to realise.

Equally, to you Steve, how does it feel constructing something as unique as this, especially with the surprising multitude of purposes people are putting it to?

I feel the same. There is satisfaction in talking about and seeing something as a drawing and then having worked through all the process of putting it all together and handing it over to the customer.

Has BMW approved the product?

Yes, I attached and wired the sidecar to a bike in the field during a thunderstorm at BMW Motorrad Days in Garmisch in July 2012. It was there that several BMW personnel saw the sidecar and were taken for a test ride. They liked it!

Is it correct that the seat in the sidecar is from a Land Rover Discovery?

Yes, the seat is from a Land Rover GR4.

Tell us about the luggage on the bike?

The bike can have BMW, Metal Mule or Touratech panniers. The box on the sidecar is manufactured by one of our customers and can be finished to match.

What modifications/improvements are in the pipeline? 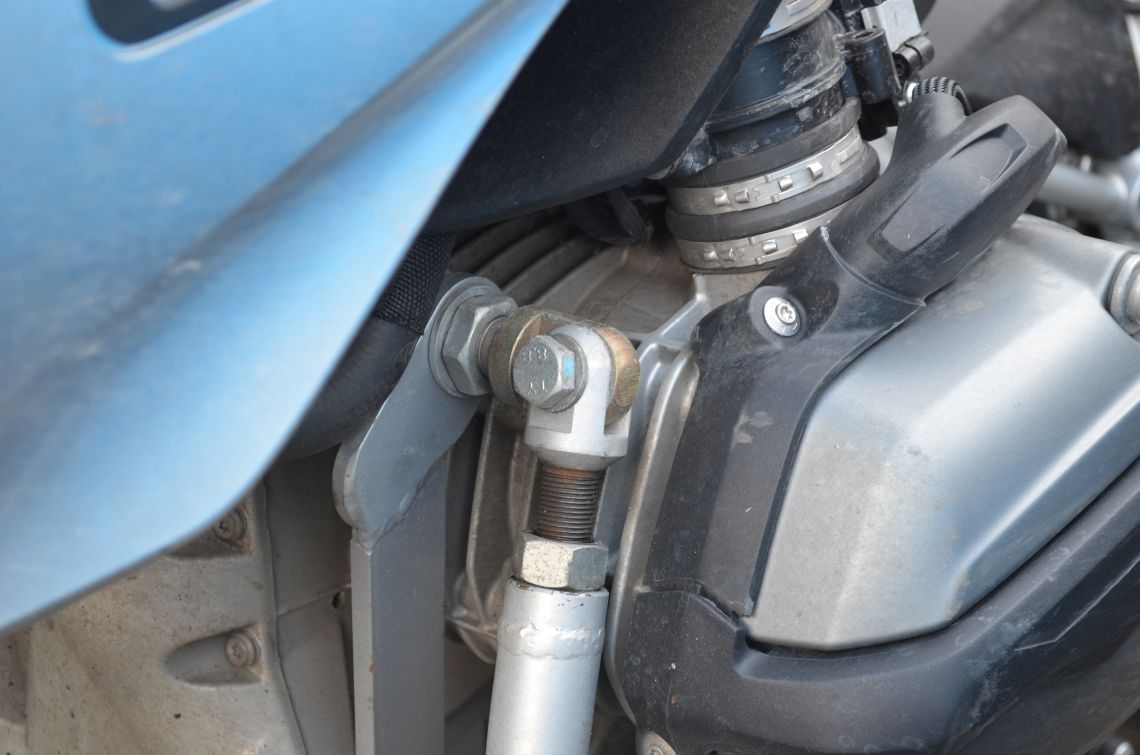 Learning to ride the sidecar

The initial training afternoon was a daunting experience.

Having been driven/ridden out to a quiet location by Steve and the basics of sidecar control explained, it was time to jump in the hot seat. The difficulty is getting used to the width, feeling that you’re going to forget about the sidecar and stuff it into the front of the next parked car you attempt to pass.

It takes a great deal of concentration, and the concept of having to turn the handlebars to steer is incredibly daunting at first. You soon find that when you accelerate, the bike wants and tries to overtake the sidecar. Then, when you brake, the sidecar wants to overtake the bike. So even going in a straight line is difficult.

Then comes the corners… To go around a left-hander you have to accelerate mid-corner, to help the bike come around the sidecar and bring you around. You can’t do that in a right-hand turn. If you do attempt that you just end up understeering wide, as the bike is effectively accelerating against the sidecar.

What you learn to do is lift-off oversteer, the same as you might in an eighties hot hatch car; going into the corner committed, then lifting off just as you turn in, this transfers the weight from the rear to the front and allowing the third wheel to go light and in doing so drift around the two wheels of the bike and bring you round.

Once the unit’s tucked into the corner, then you can power out. It took me the best part of 700 miles to figure this out, on a route that would take me around the Midlands, down to Devon, and back across to London for the Ace Cafe Overland day and then back up to the Midlands.

It’s fair to say that the first 200 miles were intense and nerve-racking, wondering if this was such a good idea after all. Slowly you get the hang of it, meaning that after a few hundred miles you begin to learn to compensate when you accelerate, by adding a little pressure to the left handlebar to keep it going straight.

For a while I wondered if this was really necessary; a 125bhp sidecar, the power of which you can’t possibly use because it’s hamstrung by the dodgem car bolted to the side of it.

It does then feel completely compromised, with you beginning to accept that just maybe the guys on the Enfield powered sidecars have got the right idea, bimbling along as they do at 50mph, the two units operating in complete harmony.

This feels like overkill. It feels like suicide. But after five hundred miles your mood starts to change, because now you’ve got the hang of acceleration, and cornering, meaning that you can crack the throttle open and keep it in a straight line, the exhilaration from doing that on a contraption such as this is quite addictive.

Then when you go hurtling down the outside lane of the motorway at ninety miles per hour, wrestling with a side wind, as the faces in the cars that you’re passing look on in amusement/bemusement/laughter/ridicule/envy – take your pic – you can’t help but wonder if this is the best drug in the world, and I really should save up the money and buy one.

I realise I look like an idiot in the picture below, but that’s what this thing does to you; it makes you happy. It makes you laugh. And it was a real pleasure getting to grips with it over those 700 miles.

I implore everyone to give a sidecar a go just once in their lives. All in all, Stephen and Steve have done a cracking job. They have built a monster. A monster that takes a while to tame, but tame it, and the world really is your oyster.