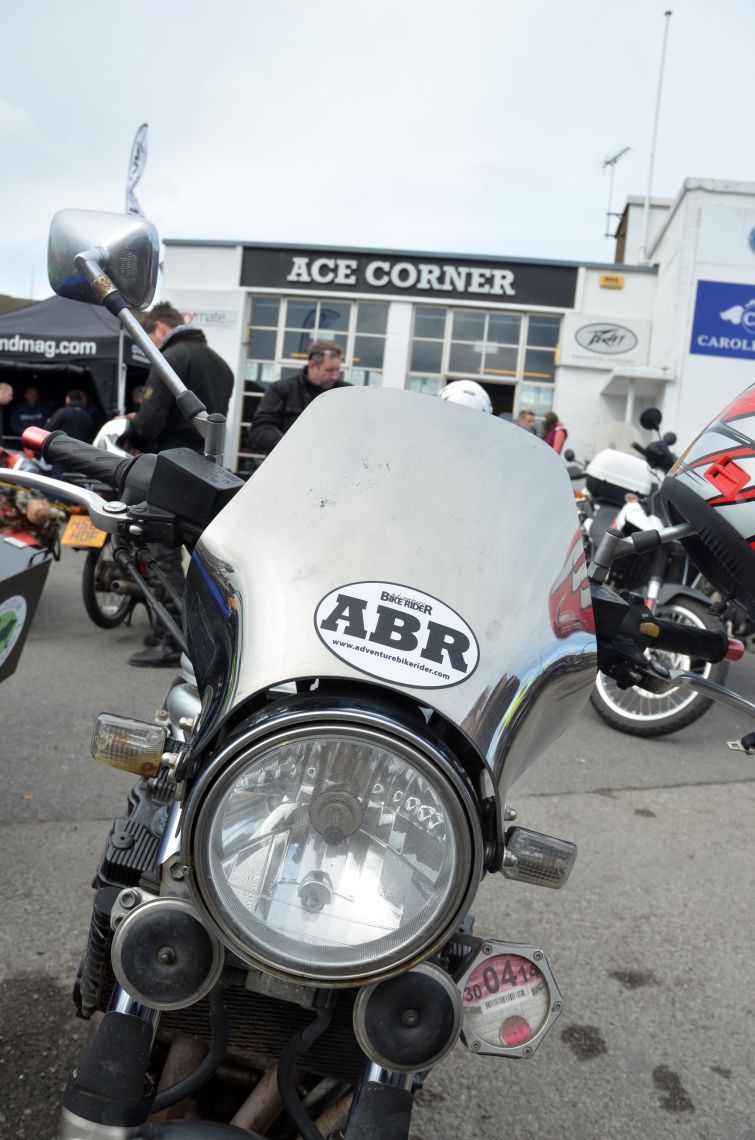 The Overland and Adventure Day has been taking place at the Ace Cafe for a few years now.

It’s usually held towards the tail end of winter, the start of spring, this time towards the end of March.

The weather’s sometimes iffy, but this year the weather was pretty good, bringing out what must have been a thousand adventure bikes and adventure bike riders, of all shapes and sizes, coming and going throughout the day. The great thing about the day is the sheer variety of bikes on display.

There aren’t so many of the latest bikes – though there did seem a fair share of new Triumph Explorers – it’s more the older stuff that turns out; the guys on the DRZs, Africa Twins, 1150 GSs, and then the weird and the wonderful, such as the diesel-powered Track T-800 CDI, a bike built in the Netherlands and using an 800cc Daimler-Chrysler turbo diesel engine to give it 80 plus mpg, likely to be a rare sight now that the company has sadly gone under.

There were also immaculate TDM 850s, an old CCM SR40, even the eighteen-year-old BMW R100RT that Bernard and Cathy rode around the world on, a trip detailed in their brilliant book; Touching the World.

One of the most imposing sights was of the three Suzuki DR750s all in a line, reminding us what the adventure bike market used to be about; usable traillies, of modest cc and simple technology, now replaced by bikes far bigger, heavier and more powerful.

That was probably the thing you noticed as you wandered around; just how good the old bikes looked, and how well they were holding up, some as many as twenty or thirty years old.

You can’t help but wonder if the bikes of today will be around just as long, or have they – like most other things – become far more disposable, and not for the better?

As well as being about the bikes, the day at the Ace was also about the people, some of which become familiar faces, and then good friends, the more you come to places such as these.

It was also great to see a number of bikes sporting the ABR sticker, and an opportunity to meet some of the forum members, such as Loggy with the immaculate Africa Twin that he’d spent three hours cleaning before riding it over here.

Events such as these remind you that it’s a small community, and the people are passionate about the bikes that they ride.

The day was also a good chance to see what modifications and accessories people are fitting, and which work, and which don’t work. Panniers covered in stickers, lambswool seat covers for distance, and Oxford grips retro-fitted to a good number of the bikes.

There was also an opportunity to say goodbye to Steph Jeavons, a plucky 38year old Welsh lass, about to set off on her epic solo journey around the world on a heavily laden Honda CRF250, with progress being tracked on her website; www.stephmoto-adventurebikeblog.com

Ace owner Mark Wilsmore climbed up on the roof of the cafe and called the crowd to silence, wishing Steph all the best and waving the Union Jack in a way that more of us might have done if this was back in the sixties and the mods and rockers scene was still alive and kicking, which in a way it still is at the Ace, the place taking you on a time warp back to the glory days of British motorcycling…

Also in attendance was the crazy Ed March, a twenty-something Cornish lad who has ridden the most tired-looking C90 you’ve ever seen on some pretty amazing adventures, starting by riding it back from Malaysia, then up to the Arctic Circle in the middle of winter, the following year back from Mongolia, and this year down from Alaska to Argentina with his girlfriend, who’ll be riding her own C90. We wish them both the very best with that.

In a way, though the day wasn’t really about big adventures or setting off across the world, it was more just the opportunity to blow off the cobwebs, get the bike out and go for a ride to a place of like-minded people. Keep an eye out for details of next year’s event posted on the Ace’s website (www.ace-cafe-london.com), and in the meantime have a look at some of the other events we mentioned in the last issue of ABR and try and get yourself along to a few of them.

You don’t have to have done a big trip, or even want to for that matter. It’s just the mentality of getting out there that matters.

See you at the next one.

History of the Ace

The Ace Cafe was built in 1938 as a roadside cafe to cater for traffic, particularly hauliers, using the new North Circular Road.

With its proximity to Britain´s then-new and fast arterial road network and being open 24 hours, the Ace Cafe soon attracted motorcyclists.

Once the cafe was established, the owner’s thoughts turned to the motor trade. In 1939 he opened a service station with a battery of 10 pumps, washing bay, showroom and repair shop.

In WWII, the building was badly damaged during an air raid. The Ace Cafe was reopened in temporary accommodation and subsequently rebuilt in 1949. 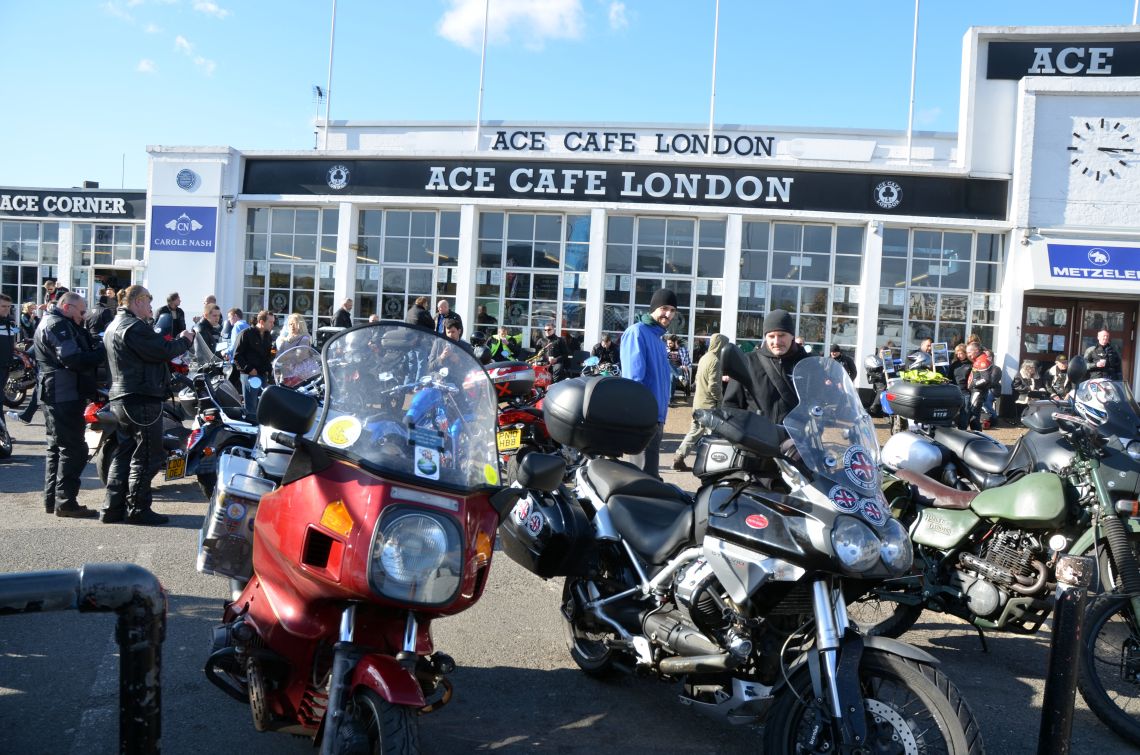 The post-war increase in road traffic and the advent of the ‘teenage’ phenomena saw the Ace booming, and with it, the arrival of the ‘Ton-Up-Boys’.

The British motorcycle industry was at its peak, and along came Rock ´n´ Roll. Not played on radio stations, initially, the only place it could be heard was at fairgrounds or on jukeboxes at transport cafes.

Sadly, the growth of the car market at the expense of the motorbike industry, and the expansion of the motorway network saw the Ace Cafe close in 1969.

Thanks to a long campaign led by current owner Mark Wilsmore the Ace reopened in December 7th 1997 and is well worth a visit. Tea costs a pound.