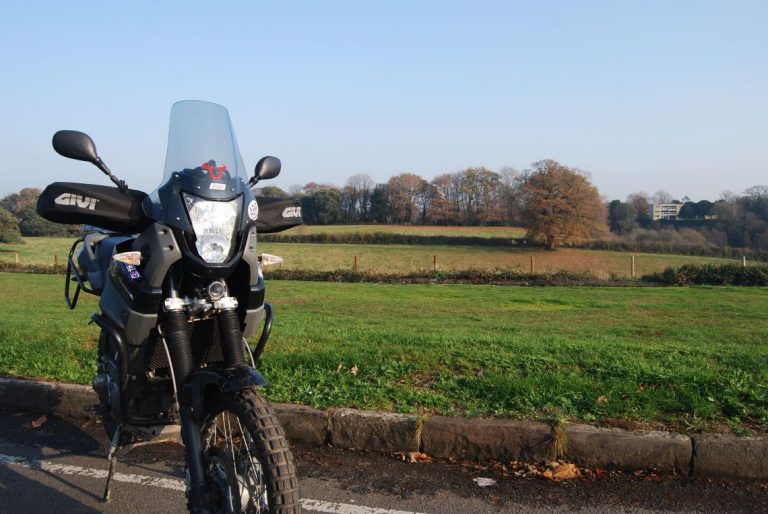 In an effort to combat cold hands when riding in the winter, Julian Challis puts six pairs of bar muffs to the test.

Winter riding in the UK can be a miserable experience. From months of unremitting rain to weeks of sub-zero temperatures, it’s easy to park up the bike and go into hibernation mode until the daﬀodils wake up. But it doesn’t need to be like this. With the right kit and the right bike there’s a still joy to be had out on the blacktop when the days turn short and the skies are grey.

So, with this in mind, this issue we are looking at bar muﬀs – no sniggering at the back please! Muﬀs are a true Marmite product in the motorcycle world. Some riders have them ﬁtted all year round and swear by just how easy they are to use, allowing them to wear less restrictive, lighter weight gloves while their pinkies remain snug and protected from the elements.

Others – perhaps maybe the majority and to be honest, myself included – see them as the Devil’s own handiwork, ﬁt only for pizza delivery boys and grubby London couriers.

But leaving your preconceptions to one side, ﬁtting covers over your hands to keep the weather out and the heat in makes sense. With motorcycle gloves rarely as warm or as waterproof as the manufacturers would have us believe, going to the dark side and ﬁtting bar muﬀs may be the perfect way to make winter riding more palatable.

So, we rounded up six sets with a range of price tags and tried them out on two diﬀerent bikes – a TDM 850 with normal bars and controls and a Ténéré 660 with full wraparound handguards. 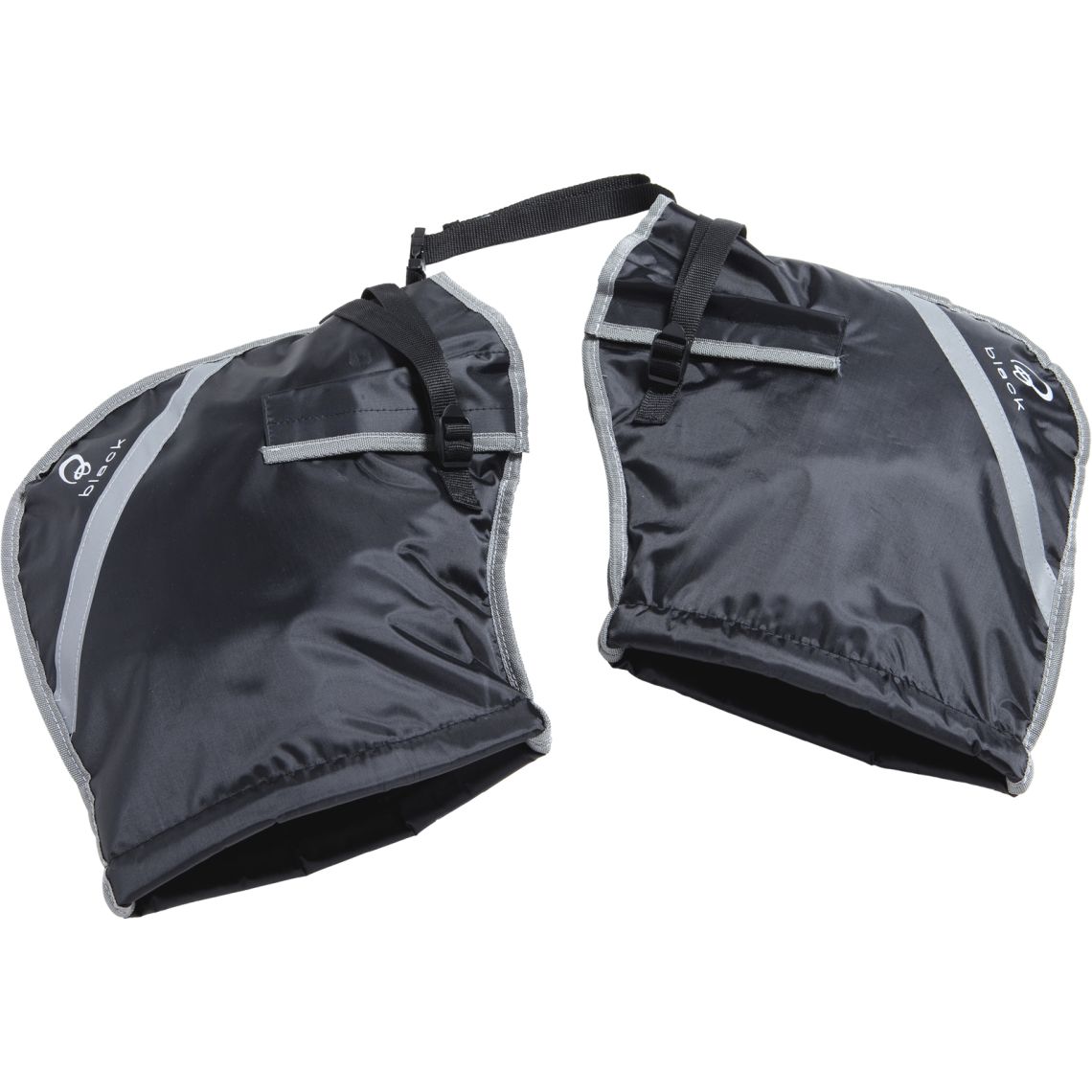 The Black Digit muﬀ s are the cheapest in the test but actually don’t look it – they are well made and have a rather lovely, if maybe impractical, fake fur lining. They are physically quite large too, but with a Velcro slot on the top surface to accommodate the mirrors, they do cover all of the grips, levers and controls.

Fitting is very easy thanks to good straps and buckles so securing them takes no longer than it should. There’s a central strap that goes between the two to help keep them in place and once in situ they are held securely.

The feel of these muﬀs is really very good for such a cheap product. Your hands are not restricted in any way whether with or without gloves and they will also accommodate full winter weight gloves without any problem.

The glove aperture is not too wide to allow in too much cold air, and the seal around the bars and cables is good enough to keep out the wind too. As your controls are inside the muﬀ , operating indicators, horn and lights is no issue.

They are a bit on the large side, but this can be forgiven as they do exactly what you want them too and they do it well. 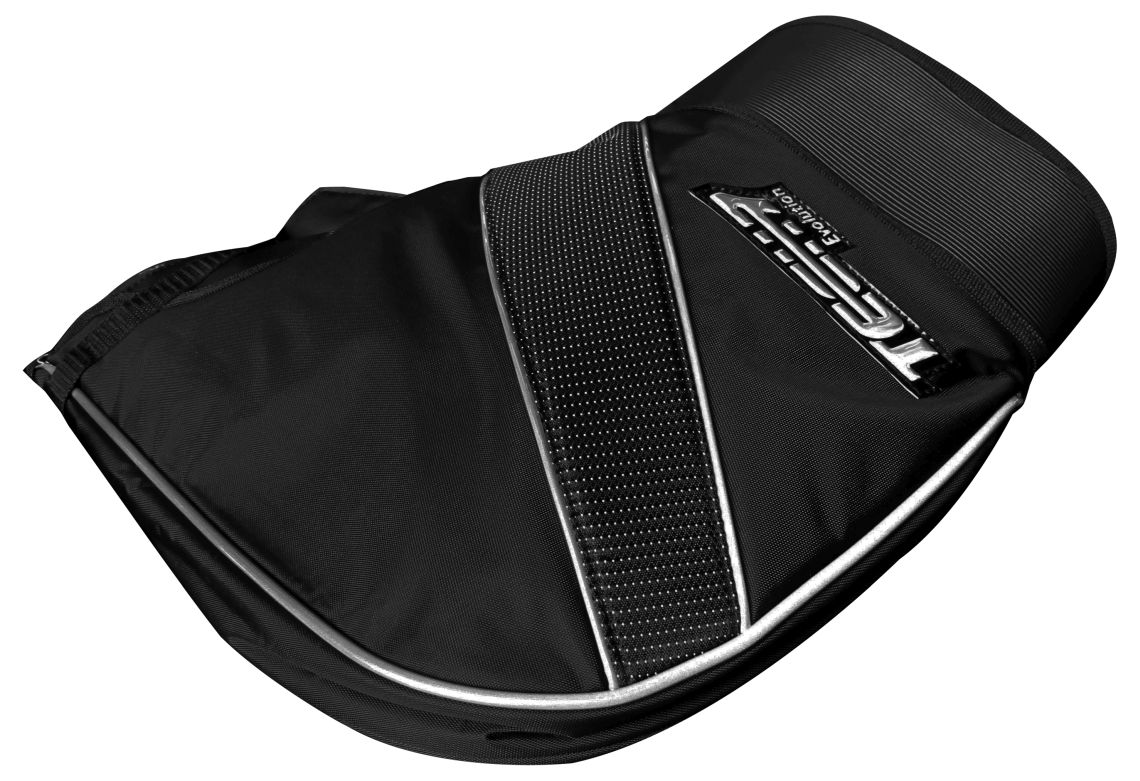 While you may have heard of Tech 7 boots, the Tech 7 bar muﬀs might not have been on your radar. Given that they are so big, they certainly are not diﬃcult to miss. They are well made and look good, but the hand aperture is big enough for three arms, not just the one required.

Fitting is simple as you just slide them into place and do up the straps, but with no cutout or slot for the mirrors, the muﬀ doesn’t seem to be far enough on the bar to be properly secure. With the muﬀ in this position, the switchgear is outside the unit and your thumb has to pop out the large gap at the side of the muﬀ to operate the controls, which seems odd and certainly does not keep in the heat.

With the top securing strap around the other side of the mirrors, the positioning is slightly better, but generally, the muﬀ seems poorly held in place, and the badly ﬁnished straps and buckles let the side down too.

The ﬁt could maybe be improved by taking oﬀ the mirror and cutting a hole to reattach this, but you really shouldn’t have to do this if it were better designed.

The ﬁt of the muﬀ is slightly improved when used on a bike with handguards, but that massive gap to let in the cold is still there. 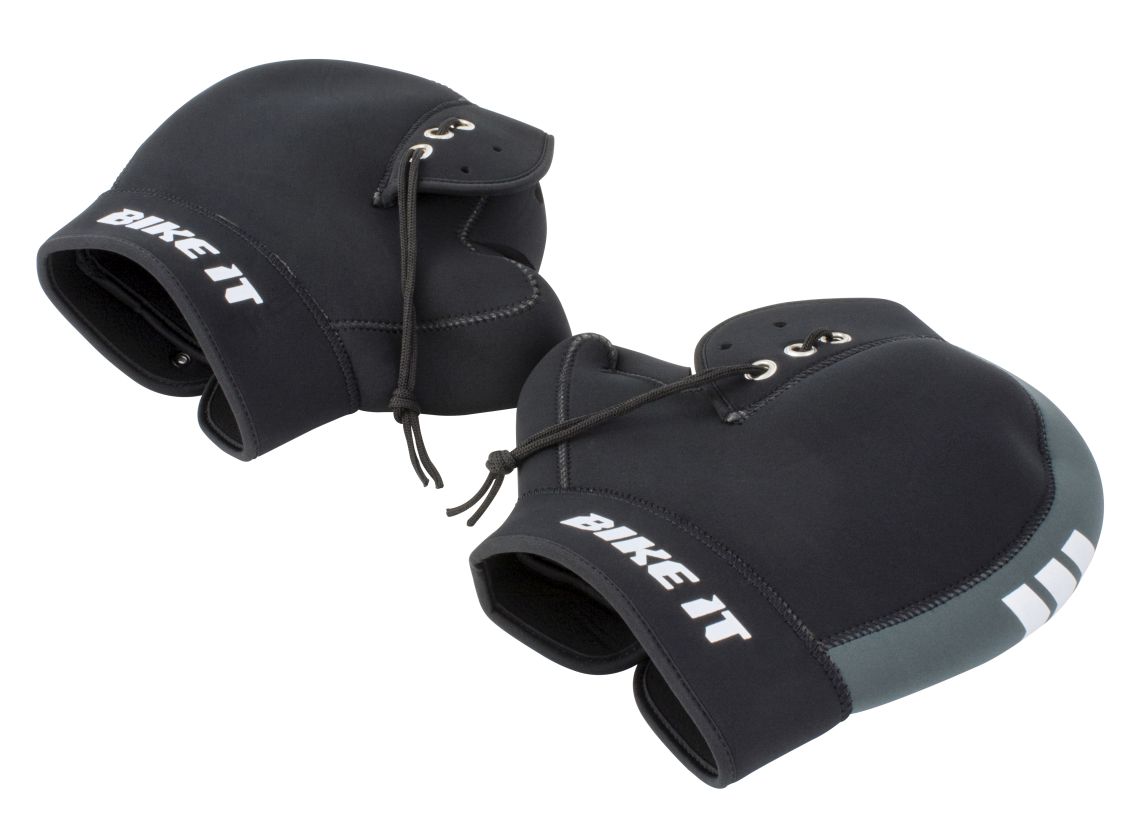 These muﬀs are in the mid-price range of the market and have a truly unique look to them. The Boxer name is quite accurate (think boxing gloves), although there is also a bit of a baseball glove look to them with the wide body and the laced part at the top.

Made from neoprene and feeling much more like diving mitts, the Bike It Muﬀs are physically small and look far more suited to a scooter than a motorcycle – they certainly cannot be used with handguards.

Fitting takes just seconds as you simply feed the bars and levers through the holes and they are in place. The laces can be used to secure the muﬀs to the mirrors, but it looks pretty homespun and amateurish.

But the biggest failing in these muﬀs is the fact that your switchgear is outside the muﬀ and thus must be moved through the neoprene thumb.

This is ﬁne if you are not wearing any gloves but once you have anything more substantial than motocross gloves, operating the controls is really diﬃcult.

The neoprene looks good at keeping out the wind, but if you can’t wear proper gloves and operate the switchgear, these are a non-starter. 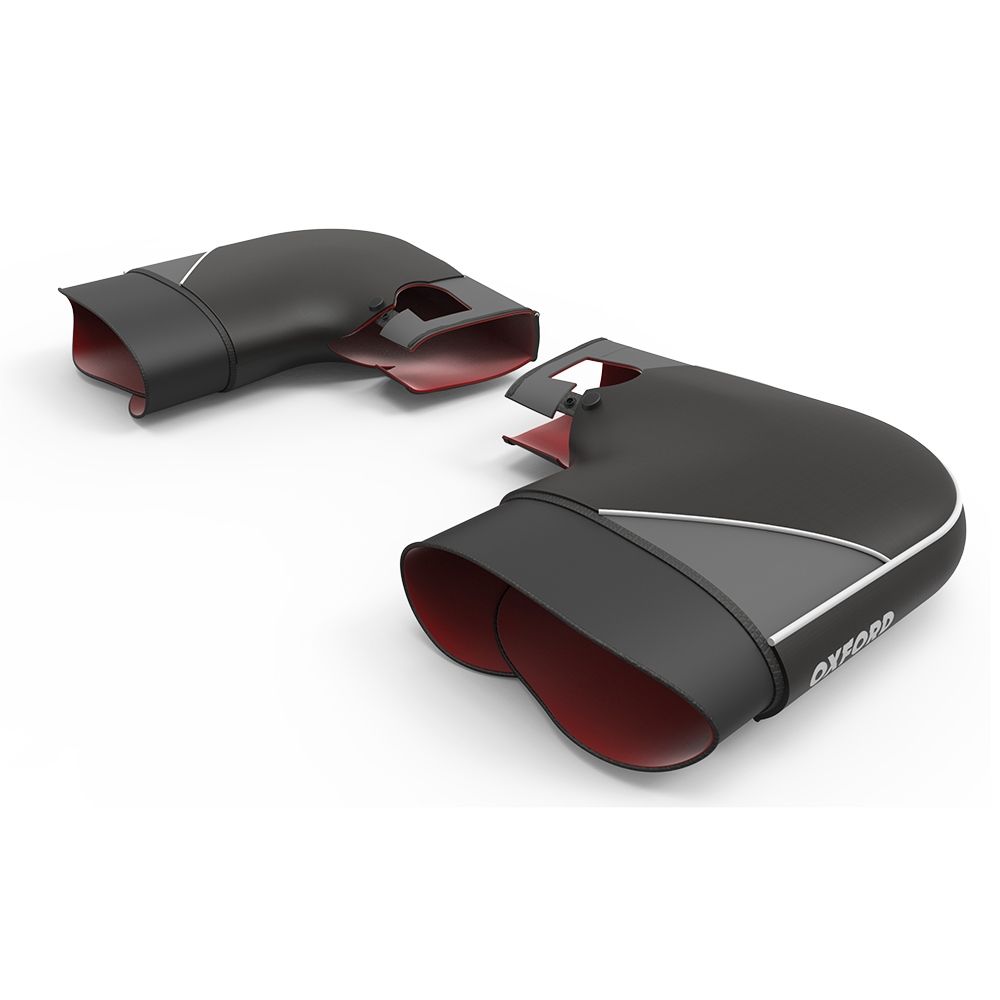 So, the Oxford Rainseal Bar Muﬀs come in at almost twice the price of some of the others, and with a history of good quality products, hopes were high.

The muﬀs are really well designed and made and have a rigid cuﬀ round the hand aperture for easy access, but like the Tech 7s they are physically very large.

Fitting takes a couple of minutes per side, and it’s an easy task thanks to a combination of poppers and straps. The instructions suggest that you may need to remove mirrors and cut a hole, but on either bike, this didn’t seem necessary as it didn’t improve the ﬁtment.

Sadly, no matter what we tried, on the bike without hand guards we couldn’t persuade the Oxford muﬀ s to ﬁ t particularly well or securely and, being so large, we felt they would rapidly become a distraction as they rested against the levers and generally ﬂopped about.

We hoped that with the added support of the handguards on the adventure bike they would be better, but the muﬀ s were not long enough to give enough clearance on the switchgear to operate the controls properly.

While these are meant to be a universal ﬁt, they didn’t ﬁt either of our bikes. 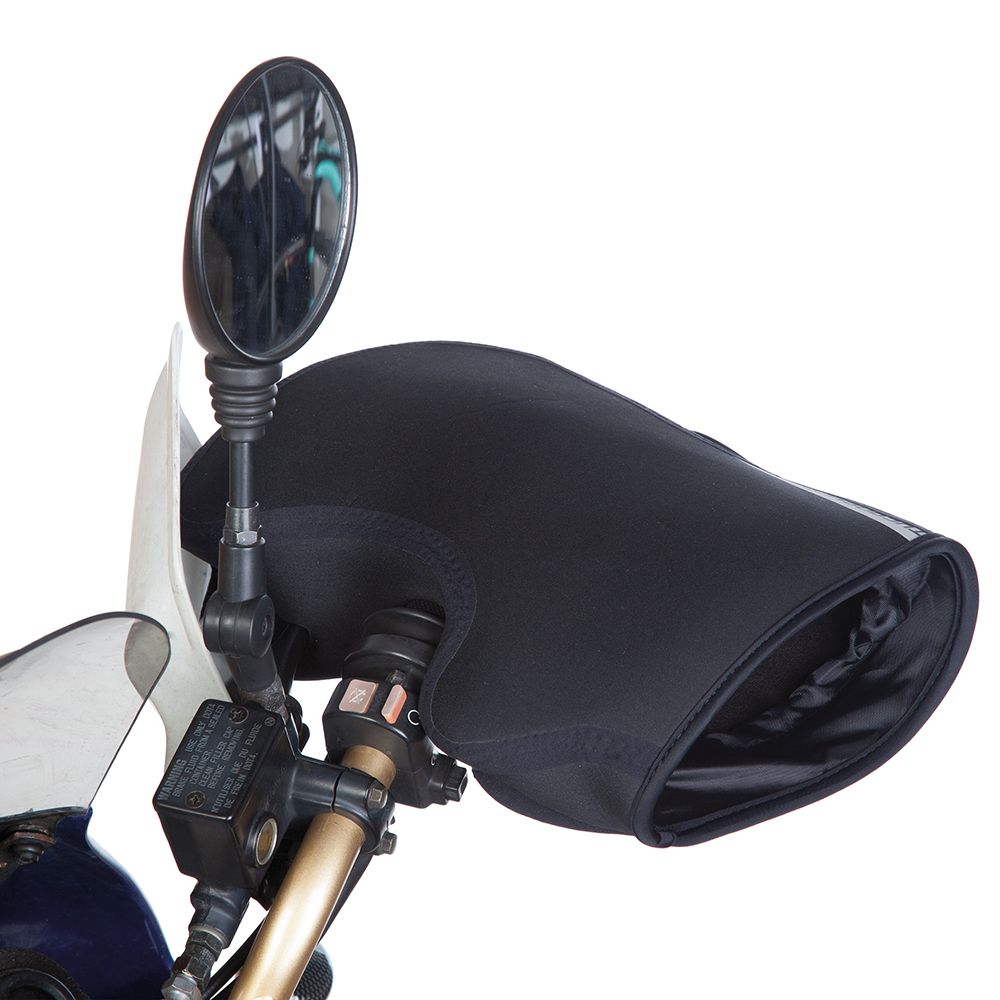 Tucano Urbano is a brand that may be better known to scooter riders than adventure motorcyclists, but the company’s gear is consistently well thought out and designed.

The EVA Handgrip Covers are speciﬁcally designed to work for bikes with handguards, but in reality, actually work well for bikes without. The muﬀ for the clutch side slides onto the bar and lever, but a small Velcro strap enables the switchgear to be taken inside the muﬀ.

There’s then a rubber bung that ﬁ ts through the neoprene and can be secured onto the bar end with the supplied cable tie. On the throttle side, Tucano Urbano has realised the throttle actually moves, so include a disc that slides onto to twist grip before you attach the muﬀ on the bar and lever. A second ring is then tightened on the twist grip to keep it all in place, and then you attach the rubber bar end in the same way as the clutch.

This muﬀ has a thumb part for the starter and lights, but as you don’t use these on the ﬂ y, there’s enough feel. If you were to ﬁ t these to a bike with handguards, you would have to remove the wraparound part, ﬁ t the muﬀ and reattach, leaving out the rubber bung.

There’s also some double-sided Velcro to hold it in place to the inside of the handguard. Both muﬀs have a drawstring cuﬀ to reduce the size of the glove aperture, which none of the others have.

Oh, and they keep out the weather excellently – looks like they’ve thought of everything. 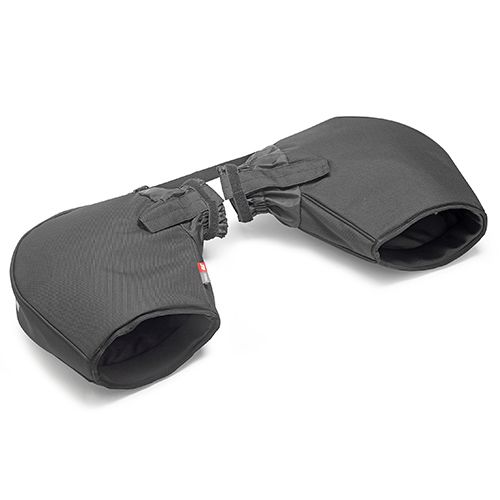 These are the best-looking muﬀs in the test and with Givi’s reputation for top-notch luggage, you’d have to hope that they knew a bit about motorcycle touring and weather protection.

As the muﬀs are speciﬁcally designed for bikes with handguards, we didn’t try them in the TDM but went straight for the Ténéré.

Fitting is incredibly simple, with a good aperture to slide them onto the bars, a Velcro slot for the mirrors, and a drawstring cuﬀ and Velcro strap to close round the bars and cables.

They’ve even gone the extra mile and ﬁtted an internal strap to hold the muﬀ onto the end of the handguard.

Total ﬁtting time is about three minutes for both sides and once the central connecting strap is clipped into place, they are good to go. Like the Black Digit muﬀs, all the switchgear is fully enclosed within the muﬀ and they can be used with full winter gloves thanks to the generous space inside.

If anything, the glove aperture, which is surrounded with a rigid cuﬀ, is a tad large, but as the fitting and placement are so good everywhere else, we can live with that.

They work well, keep out the cold and look good – deﬁnitely our favourite for the Ténéré for ease of ﬁtting, even if they are a bit bulky compared to the Tucano Urbanos.