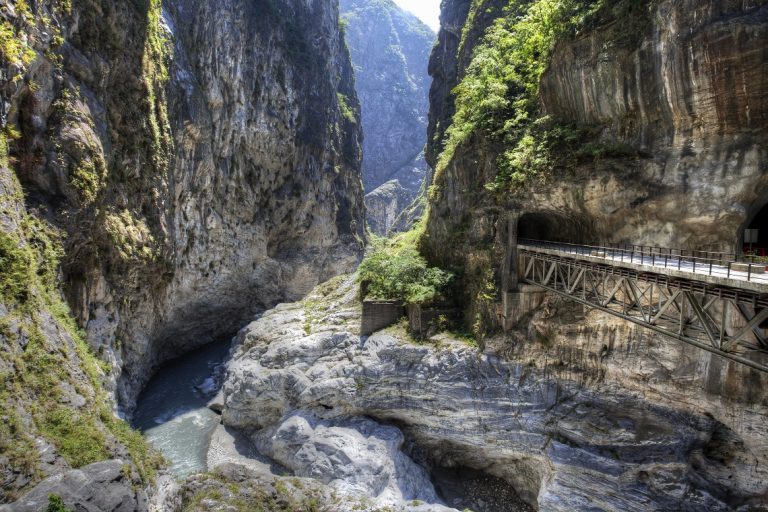 Alice Cook introduces us to the Taroko Gorge Road in Taiwan, if you’re a­fter the perfect mix of adventure and beauty, here it is

Built in the 1950s the Taroko Gorge Road in Taiwan has been making ‘World’s Most Dangerous Roads’ lists ever since they began, and it’s easy to see why.

The road is simply a piece of engineering genius, a mountain road made by literally carving through rocks that pass through one of the most beautiful National Parks in the world – the Taroko National Park.

The unique construction of this mountain pass means that the road surface, the narrow tracks and the limited visibility make navigating it a skill in itself. The 11-mile long road winds through an area that is particularly prone to seismic activity and until the 1950s only a very basic train line ran through the gorge.

That all changed when Chiang Kai-Shek (president of the Republic of China between 1928 – 1975) decided to build a road that would connect east and west Taiwan through the Central Range.

Running through the Hualien County and into the mountains of central Taiwan, the gorge is compiled of deformed marble, gneiss and schist, all of which are prone to failure, making dodging rockfalls and landslides a thing of the norm.

Heavy rain from the numerous typhoons that hit the area often dislodge soil and rocks from the walls of the gorge, making the road un-passable.

The region is also prone to an average of three-four tropical cyclones per year, each one bringing with it up to 1,200mm of rain.

It is advised that due to the ever-changing road conditions and sheer number of vehicles battling for a space on the carriageway, vehicles should not exceed 30 kilometres per hour. Couple this with the excessive number of blind corners and cascading rocks, the Taroko Gorge is one of the most challenging and dangerous roads in the world.

While it rates high on the fear factor, the Taroko Gorge has a lot to offer; the beautiful scenery alone makes driving at speed an easy way to miss out on the sights, even if it were a possibility.

There is the Eternal Spring Shrine, the main settlement of the Truku Aboriginals and Swallow Grottle with its vertical cliffs: just be sure not to let the tropical vegetation and blue streams distract you from the treacherous surroundings.

With hundreds of buses, scooters and pedestrians fighting it out for the best views and driving experience, the best time to venture out on the bike is definitely early morning; tour groups don’t usually get to the gorge until 8 am.

This is probably the only real time you will be allowed to enjoy uninterrupted views of the National Park and challenge yourself on the narrow roads and hairpin turns that this adventure has to offer.

Interestingly, the gorge used to be submerged by water, but due to the continuing subduction of the Philippines Sea Plate, it’s a road constantly on the rise, literally!

Make the most of this ‘dangerous’ road, its pitch-black tunnels and constantly altering terrain before too many health and safety considerations come into play and spoil all the fun!