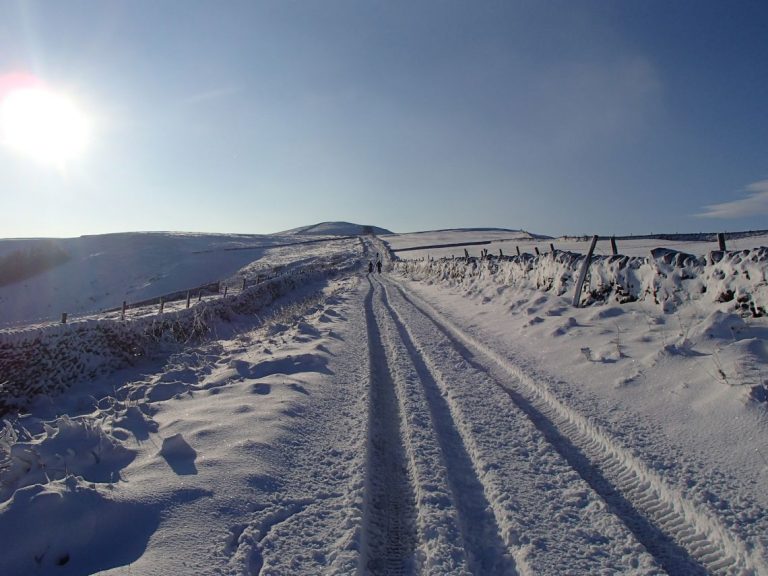 It’s going to take more than a bit of snow to stop members of the ABR forum getting out and having fun in the Peaks. Mike Beddows tells the tale of a snowy ride out in December

A few months ago, a group of us ABRs decided to meet for a post-Christmas ride in the Peaks (followed, of course, by a few beers), staying at The Royal Oak bunkhouse in Hurdlow. What better way to blow the cobwebs away than to enjoy an escape from over-indulging in family meets, food and far too much drink!

The meet was scheduled for the 27th December and the evening of the 26th brought snow, and lots of it. The main road in Penistone was covered in six inches of snow but as we were meeting a number of other ABRs the decision was made to continue and let everyone know the main aim was to get there, no matter how long it took.

I set off before sunrise to meet Felco. The solo ride, done in the dark on the snowy, icy roads, sure was an experience. The adrenaline alone was enough to keep me warm! At Felco’s, Scooby and Kenny were waiting so our foursome was ready to ride into the Peaks. Whilst three of us had suitable small capacity enduros (ideal for the conditions) Scooby had his XT660Z and what would have normally been a one hour journey took closer to four. The roads were terrible until we reached the back roads of Strines. We anticipated this stretch to be the worst, how wrong we were. The local farmers had done a fantastic job of gritting, far better than the local council had done.

Despite this, the roads were still dicey and abandoned cars and fallen trees littered our route and Kenny became the first faller of the day on a sharp right-hand bend. Progress was slow, but we would soon join the A57 (Snake Pass) and hopefully speed up a bit. Again, we were wrong. The A57 had not been gritted at all and was white over. We passed more abandoned cars and decided to hit the trails. They were covered with at least a foot of powdery snow and we finally had grip and were able to speed up.

Riding in virgin snow is fantastic, and to make things better it was a crisp cold clear day with incredible views across the snowy peaks. One trail had three-foot drifts that took some battling through, especially for Scooby on the XT660Z.

Eventually, we arrived at the pub, a mere three hours late, and the others, who had been waiting a while, were keen to get going. Tea007 and Stevied on 990 Adventures were to keep Scooby company on ‘unsuitable for the conditions’ big bikes whilst the rest of us had 300 and 450 enduro bikes of various makes.

As we rode the back roads and travelled along a few easy trails we got to Hollinsclough, home to what I’d consider the hardest trails in the Peaks. Hollinsclough is split into two tracks, one left and one right. Right is impossible for anything other than a trials bike uphill (unless you have a lot of help from your friends) and left is fairly steep and would be a struggle in these conditions. It didn’t take long for the XT660Z and 990s to come to their senses and turn around. The rest continued up Hollinsclough B and then down the rock steps of Hollinsclough A.

The route was then altered to focus on the easier trails as we made our way to a grub stop at Flash Bar Stores, the highest village stores in Britain (and it has a sit-in café attached). Well worth a stop if you are in the area.

After a quick pit stop we were underway to do my favourite Peaks trail, ‘The Three Shires’ (as detailed in Adventure Bike Rider Issue 15 UK Green Lanes). This is a cracking single track trail which is not too difficult. The snow had made it a lot harder, but no less fun. Time was getting on by now and the conditions had worsened, the clear skies had been replaced by clouds and light snow, so the decision was made to head back to the bunkhouse before darkness set in.

After a meal in The Royal Oak, we took a taxi to Buxton to enjoy the pubs on offer. A great time was had by all and far too much was drunk. The early hours soon materialised and we made it back to the bunkhouse in a few different groups.

Despite the weather, it turned out to be a fantastic ride and bunkhouse meet in the Peaks, and the snowy conditions added to our mini adventure! As always, keep an eye out on the ABR forum as these kinds of trips pop up all the time and all are welcome!

Do you want to get involved in an ABR ride out or meet?

Head on over to the ABR forum (www.adventurebikerider.com/forum) where members organise various events around the country. There’s usually something on every month and it’s a great chance to meet like-minded folk and have a good time!