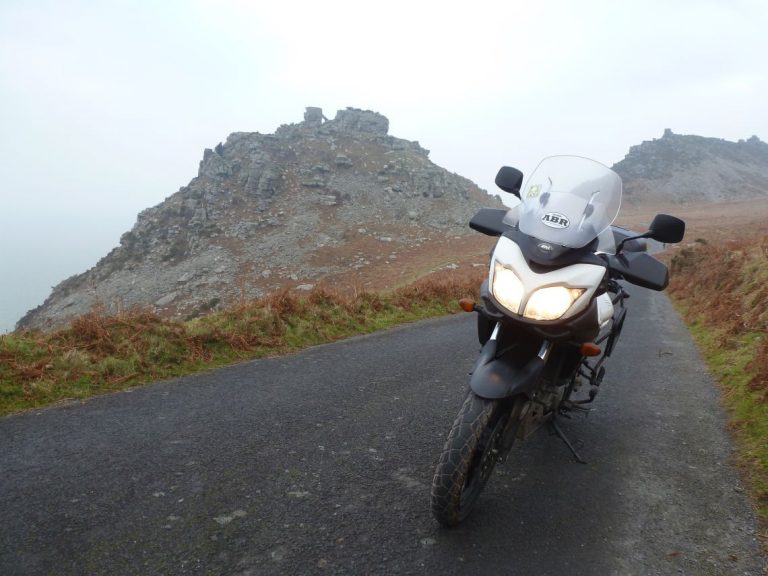 Following in the footsteps of the drug-addled writer and philosopher Alun Davies discovers the wild charms of Somerset and the North Devon coastline.

Researching the life of Samuel Coleridge I was reminded of a hike I completed in Tunisia back in 1997.

Having failed to find any records of an attempt to traverse the Atlas mountains in the North African country I set off from the southern terminus of the hills near the Sahara Desert and trekked north loosely following the Algerian border all the way to Tabarka, a city on the Mediterranean coast and the point where the mountains met the sea. 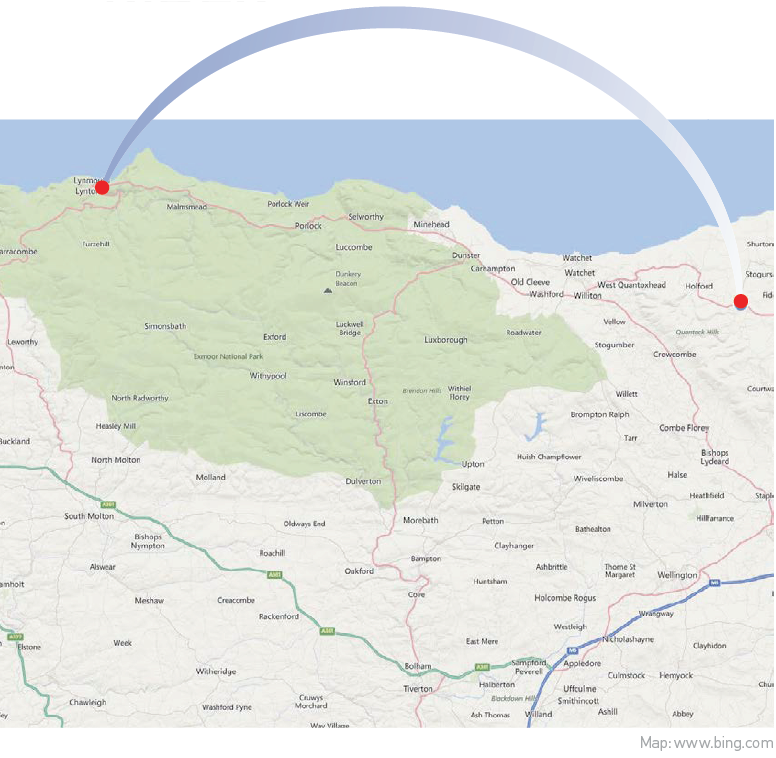 Along the way, I met many Tunisian mountain dwellers who without exception offered a welcome and displayed kindness though it was always tempered with an element of suspicion.

In their mind, the mountains were a place of danger, an inconvenient barrier to getting on with the more important aspects of life, and they had no concept of why anyone would want to walk through a dangerous landscape for pleasure.

They found it almost impossible to accept that I had travelled from the UK for an enjoyable walk in their hills.

When Samuel Coleridge set up home in the Somerset village of Nether Stowey, his good friend William Wordsworth decided to move to the nearby village of Holford to be near to the writer and philosopher he most admired.

During their time in West Somerset, Coleridge and Wordsworth were the vanguards for the romantic movement which blossomed in the late 18th century and they found their inspiration from the wild beauty of nature so abundant in the coastline and hills of the area.

Daily they would set out on walks across the hills and the steep-sided wooded combes composing their words and prose which resulted in ‘Lyrical Ballards’ a book seen as the start of the of English literary Romanticism.

However, life was not as whimsical as it may have appeared and both men were viewed with great suspicion by the locals. If you were rambling in the countryside back in Coleridge’s day your status was called into question. Where was your horse, were you a vagrant, a thief, a murderer even.

Back in the late 18th Century, as in modern-day Tunisia, the enjoyment of and engagement with nature was not a recognised leisure pursuit.

Nether Stowey is a short distance from Bridgewater and the M5 and it was here on a cold, grey February morning that I pulled up outside the celebrated Coleridge Cottage in Lime Street, the start of the Coleridge Way trail.

Although he only lived in the area for a few years, during which his opium addiction intensified, Coleridge has left his mark. His two most celebrated works, The Rime of the Ancient Mariner and Kublai Khan, were both penned during this period and at this house.

On the morning I parked up the cottage was closed but luck was on my side. I was invited in by a patron of the trust who administer the building, he was intrigued that I was about to follow the hiking trail, on a motorcycle.

Unfortunately, once inside I couldn’t see my hand in front of my face let alone the walls, furniture or Coleridge’s writing desk.

The electricity was off and with no windows in the main room, the experience was not dissimilar to closing my eyes on a dark night. Nice gesture though.

From Coleridge Cottage I took my first diversion from the route, choosing to take the single track road up and over the Quantock Hills rather than following the trail around the northern flanks.

The bedrock of the Quantocks were formed from slate and sandstone some 400 million years ago when Britain was part of a larger landmass on the equator.

About 200 million years ago they were a desert rather than hills but more lately (in the 1950s) they became the first region in England to be designated as an Area of Outstanding Natural Beauty.

On the day that I rode over they were blanketed in mist and fog with visibility reduced to Hound of the Baskervilles levels – yes, I know, that’s set in Dartmoor.

At the top of the hills, I pulled up at a spot named ‘Dead Woman’s Ditch’ – named after an infamous murder of olde – and landed straight in the middle of a local hunt.

There were farmers, dogs and 4x4s all over the place, though interestingly no horses, and despite this being a protected area, four-wheel-drive trails headed off in all directions, alright for some I suppose.

Heading down the steep eastern slope of the Quantocks the mist lifted a little and I could just make out the rolling landscape leading to the Brendon Hills at the start of the Exmoor National Park.

The GPS took me through charming little villages such as Bicknoller and Monksilver along single-track lanes that without maintenance will surely soon be green lanes.

These narrow tracks of tarmac between high hedgerows see little use by anyone other than farmers and in some parts, the mud is so all-consuming it’s difficult to tell where the road ends and the fields begin.

Near to the village of Roadwater, I stopped at a Cider Farm and managed to talk myself out of doing what comes naturally and settled for a cream scone and coffee as a way of getting in character for entering Devon.

From Roadwater to just beyond Luxborough it was easy to understand how Coleridge gained inspiration from the region as the road followed a classical babbling brook through a wooded valley that reminded me of some of the remoter parts of the spectacular Black Forest in Germany.

Even on a grey, cold February morning the beauty of the land warmed my thoughts as I passed by chocolate box cottages with thin trails of wood smoke drifting from quaint chimneys.

Upon the hills, past Luxborough the land opened up offering views back to the Quantocks which were still shrouded in a hazy mix of mist and fog.

Peregrine falcons took the high spots on telegraph posts, pheasants roamed the fields, tracks and roads and I’m pretty sure that flash of blue darting upstream was a kingfisher.

It’s a beautiful spot alright, and not one you’d associate with iron ore production and yet the Brendon Hills were once the home for large numbers of imported Welsh and Cornish miners who plied their underground trade in these hills sending ore across the nearby Bristol Channel to the smelting works in South Wales.

From Wheddon Cross to Porlock via Horner the scenery changes to that which most people would associate with the word ‘moor’.

The route passes just to the east of Dunkery Beacon which at 520m (1,705ft) is the highest point in Exmoor. Open treeless moorland is the order of the day here with tempting bridal ways heading off in all directions.

Visibility was still curtailed but I know from previous visits that on a clear day the views from up near Dunkery Beacon are magnificent, stretching over the Seven Estuary to Wales and inland across the choice landscapes of Somerset and Devon.

I pulled up in Horner at the Packhorse Bridge. Built in the medieval period, this was typical of the bridges being built at the time, being wide enough for a single horse to cross.

It’s also pretty likely that Coleridge would have used this river crossing many a time whilst on route to Porlock. The seaside village of Porlock is enclosed by the Exmoor National Park on three sides and the Bristol Channel to the North.

There are plenty of pubs, shops and cafés and it’s a pleasant enough spot for a break but I was keen to head on over to Porlock Weir and seek out a green lane I’d spotted on the OS map.

As it happens it was an easy find and a none-too-committing trail ride up steep ground to where it joins a private toll road up to the high moors.

The green lane and toll road can be avoided by sticking to the A39 and riding up the famous Porlock Hill which raises 1,300ft in less than two miles and in parts comes with a one in four gradient.

However, back to the green lane and toll road which provide interesting riding conditions and pass by Culbone Wood famous for once housing French prisoners and a colony of lepers.

Culbone Church is also said to be the smallest church in England seating just 30 people.

From the toll road, you have the option of taking in the spectacular East Lyn Valley better known as the Doone Valley from the 1869 novel Lorna Doone by R D Blackmoor or sticking with the A39 as it winds its way through the Exmoor Heritage Coastline.

Speaking personally, this fast, sweeping section of the A39, with the moors on the left and striking coastal headland on the right has the same effect on me as the Sirens on sailors and I just can’t bring myself to turn off.

Officially the Coleridge Way terminates at the Pavilion National Park Centre in Lynmouth though no visit to this area would be complete without a ride through Lynton and onto the curious Valley of the Rocks. Both Coleridge and Wordsworth made the trip to the valley and so should you.

The ride finishes with another section of toll road traversing a steep, wooded headland around remote bays such as Lee and Woody Bay with a green lane track heading down to the latter.

Perhaps it’s fitting to end this trail with a few words from the man himself which sum up a ride across West Somerset and North Devon.

‘Now my friends emerge Beneath the wide, wide heaven. And view again the many steepled tract magnificent of hilly fields and meadows and the sea’.