Adventure Bike Rider·7th June 2021
Issue 7
Imagine being given 12 months’ free reign to ride wherever you want. Money and time are no objects, and neither is the boss… Graham Hoskins, this is your grown-up Gap Year

Imagine being given 12 months’ free reign to ride wherever you want. Money and time are no objects, and neither is the boss… Graham Hoskins, this is your grown-up Gap Year 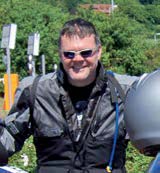 My gut reaction was to plan a ride to the North Pole, just to prove I could. But I think the endless snow might get a bit tedious, not to mention the body swallowing crevasses, melting ice polar caps, huge white bears that can outrun the bike, freezing fuel, frostbite… Adventurous, I may be; Ranulph Fiennes, I am not.

However, the actual answer isn’t far from the North Pole and it’s one which I’ve been mulling over for a while: the Silk Road. That historic route along which the Fedex and Parcelfarce of the 16th Century transported silk from China to Europe. Now there are as many interpretations of the actual Silk Road route as Clarkson has ‘Some say…’ descriptions for the Stig. Mine is an utterly self-indulgent one with little regard for true history and consequently may have the odd hole in it. This is a dream trip, not an exact itinerary, so bear with me!

Ok then, the route. Starting from Blighty. If I could find a way to avoid France I would – not that I have anything against the French, it’s just that I’ve ridden across France so many times it feels a bit like going down the road for a packet of chips. Head south-east through Italy, fly through Slovenia, Serbia and Bulgaria, but definitely stop for a glass or two of Ouzo in Greece – in Xanthi, to be specific. I knew a girl at college called Xanthe and I would spend a very happy hour or two basking in those memories!

The last time I crossed Turkey, I rode almost 900 miles, south-east to north-west in less than two days, so I would prefer a slightly more sedate pace this time. Towards the south-east heel of Turkey then and on into Asia. That makes it sound so easy, ‘…on into Asia’. As easy as putting a ship in a bottle while wearing a pair of oven gloves – you would get in a different way if you could, but it’s all doable with time and patience.

I could not think of a grander entrance into Asia than crossing northern Iran via the coast of the Caspian Sea, Tehran and the Golestan National Park. Ride almost due north across Turkmenistan, passing to the east of the Kaplankyr National Park and Sarygamys Koli Sea (or it might be small enough to be a lake? Answers on a postcard, please). There is a small but widening gap between the ship graveyards of the shrinking Aral Sea and the Badai-Tugai Nature Reserve in Uzbekistan, which would loop my route across the north of the country, if there is a road that is passable.

The ride across Uzbekistan would require close visitation rights with the ancient cities of Samarkand and Bukhara, and the Aidarkul Lake in the Kizyl-Kum Desert, passing across and through the Nuratinski Mountains. With the name of this particular route in mind, it would be rude not to visit the Ferghana Valley silk-producing region and finish with yet another set of mountains – the Chimgan.

Which brings us into Kyrgystan. Who has even heard of this country? Little known and therefore, hopefully, as untouched a place as you are going to find almost anywhere in the world. Through the Tien Shan mountains, which are reputed to only be accessible by horse, (I figure if four legs can make it, two wheels should be able to). I am reliably informed that the view from the Tien Shan mountains is one of the world’s best kept secrets. I Must also visit a Kyrghyz sheep or goat herder’s encampment somewhere on route; stay on the shores of Lake Issyk-Kul, and examine the petroglyphs (rock engravings) near Cholpan Ata.

Finally, Turugart Pass to Kashgar in China. Turugart is often quoted as the least popular of the commonly used border crossings. It’s also a bit more remote – sounds great, better and better! I really don’t know how much of my gap year I would have left at this point. Whatever remains would be well spent exploring western China.

On the one hand, there’s a bunch of countries here that I have never heard of, never mind being able to pronounce them properly. For me, that has got to be a great starter for a gap year trip into the unknown. And therein lies the core of what this trip is about. We seem to have looked through a TV-shaped window into so much of this world but the areas on this route are far less known. For me, they hold barrel loads of mysterious substances laced with the odd trace of something explosive. Somewhere with genuine mystery that scares me just a little, and on some days, scares me a lot. Somewhere that every day, leaves me feeling grateful, small and fulfilled in equal proportions.

I also happen to think it would make a spectacular TV documentary. We know and have seen so little of the old Soviet Union that it would be fascinating to ride, walk and hopefully live a little among these people. A huge part of this trip would be the time to spend in the remote locations, hopefully getting to know the people there – if only a for a while.

My best pal came up with the most wonderfully appropriate analogy for a GS. It is like Ray Mears – doesn’t look too skinny, and not all that pretty, but you would definitely rely on him to help you survive around the world. Does that make Bruce Parry the 800GS? Bear Grylls, the new Triumph Tiger 800 XC? In terms of a choice, for once, I am uncertain. I’ve had terrible reliability from both my GSA and my KTM Adventure. But when they were working, they were great. The Triumph’s still a bit unknown and Africa Twins and the likes are just a bit old for me. This route does not go off-road too much, so as much as I hate to join the mainstream, the beemer gets it. But only just.

Farkles would include Metal Mule panniers (they’re reassuringly expensive, but the strongest and best-made panniers I have ever used), and a sheepskin seat-cover – a year of sweaty bum syndrome would be enough to make any man cry. I’d remove the catalytic converter – too much weight and it could turn into a molten lump as soon as you start using leaded fuel, and install Starcom Digital with full Bluetooth connectivity – I must be able to listen to music! Then add high-level footrests (Harley-style for long, boring stretches of road), GPS, kick-stand end plates, engine bars, fuel cannisters… once you start, eh?

My wife if she would come and if Sienna Miller turned me down. She’s had a licence for 13 years (wife, not Miller), but only ever ridden a few hundred miles and is eager to do more. We might need a few practice rides first though. If she wasn’t interested, then I’d ask my best mate with whom I rode to Russia a few years ago. Of course, in reality, my wife would not let me go away for a year, but then this is a fantasy!