The day job with Nick Sanders 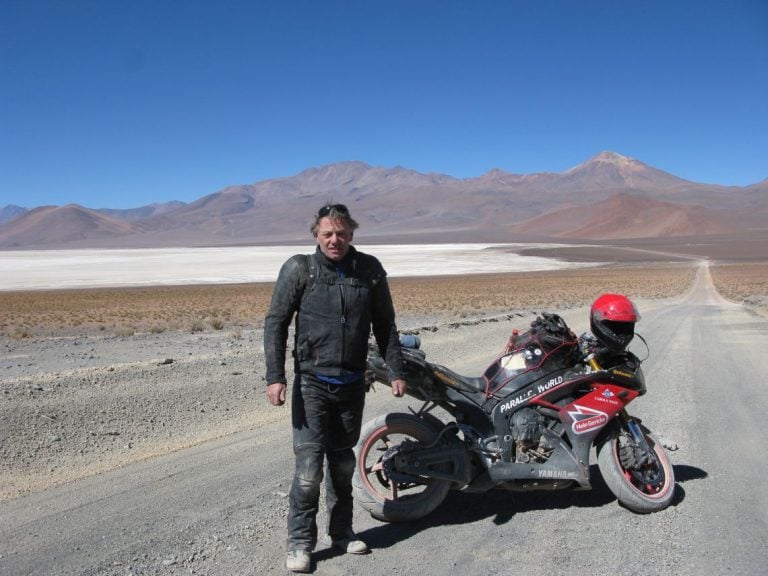 Do you dream of earning a living from the seat of a motorcycle? Nick Sanders spends his life travelling the world on a Yamaha R1, making TV programmes and writing books on his experiences. Prepare to feel very jealous…

Circumnavigating the globe on a motorcycle is a monumental achievement and something that most of us would be proud to have done. But for Nick Sanders it’s run-of-the-mill: he’s done it seven times now and is constantly trying to make it harder for himself. His favoured steed – Yamaha’s 1000cc flagship YZF R1 Superbike – isn’t exactly known for its long-distance comfort qualities, and just to make things more interesting, Sanders travels against the clock, snatching a few cat naps here and there by the roadside while still in the saddle, slumped over the fuel tank. In 2005, he re-took the world record for riding round the world when he completed his journey in an incredible 19 days and three hours.

And then, in 2008, just to make it even more of a challenge, Sanders completed the longest ever bike ride round the globe when he travelled as far as he could on each continent and racked up an astonishing 55,000 miles. The 51-year-old estimates his total accumulated mileage to be approaching the half-million mark. Quite simply, he’s the most experienced extreme motorcycle adventurer on the planet.

So what’s left to achieve? Does Sanders find himself wishing the world were a bigger place so he could have more places to explore? “I think it’s almost the opposite,” he says in his quiet, studied manner. “If you look at the world from space and see where I’ve been, I’ve only been along tiny little lines, so I could go around the globe another 50 times and still only have seen a quarter of it.”

For some, half a million miles would be enough, but not Sanders, who says he’s never had a moment on a trip when he wished he’d stayed at home. “I don’t think I’ve ever felt that on a trip really. Before I leave on a trip I often wish I didn’t have to go because I love my family and my home – I’m a very normal bloke in that respect. I suppose it’s kind of like stage fright. I get very nervous because I don’t want to get it wrong. But once I’ve gone, I’m gone.”

Sanders has been riding bikes since he was 16, and made his first round-the-world trip on a 500cc Royal Enfield Bullet back in 1992. His choice of touring motorcycle continues to be unorthodox. “The Yamaha R1 is not an obvious choice to most people, but I love it because it’s very light, it’s fast, it’s very accurate, and it’s very robust,” he says. “I’ve never had an R1 break down on me in all my travels. I’d rather go on a ‘wrong’ bike that works well than on the ‘right’ bike that breaks down! It also costs less to freight between countries because it’s light. And, at the end of the day, it’s also a lovely looking bike.”

Riding one of the world’s most extreme sports bikes doesn’t restrict Sanders when it comes to road surfaces either. He’s probably the most experienced man in the world at riding the R1 off-road. “I really enjoy Route 40 in Argentina – it’s 2,000 miles of gravel,” he says, quite seriously. “It’s one of the last great routes that hasn’t been paved. One of the benefits of having done so many miles on the R1 is that I know how to ride it. You can ride quickly through gravel too. Last time I did that route I had a pillion passenger. As long as you’re going forward and the bike is upright, it’s fine. I was keeping up with all the KTMs and other off-road bikes. You just need to watch your braking and watch the corners.’

Comfort is clearly not high on Sanders’ list of priorities. Neither is sleep. “If I’m trying to break a world record then I sleep by the side of the road or just pull over and have a power nap while I’m still sat on the bike.”

Surely riding round the world at such a frantic pace is sort of missing the point. Does Nick regret that he can’t spend any time in the beautiful and exotic locations he howls past? “Absolutely, but I have to be mindful of the fact that it’s because of what I do, and the way that I do it, that I’m being paid to travel in the first place. You can’t have it both ways. People who think they’re going to get sponsored to go on a nice leisurely round-the-world jolly have no chance. Why should sponsors pay for someone else to have a holiday?”

Amazingly, in all the hundreds of thousands of miles, he’s travelled, Sanders claims he’s never had any scary experiences. “Technically, Colombia should be intimidating because there are still hostage issues there, so if you’re in the wrong place at the wrong time, then that’s it. The hostage-takers over there don’t kill you, they just keep you; you’re a walking wallet until someone pays up. But the chances of that happening are small if you do the right things like travel in the daytime and keep a low profile. And the country itself is absolutely beautiful.”

It seems the one thing that scares Sanders and is not being able to keep on doing what he’s doing. “Not keeping my sponsors happy is the only thing that scares me because that would mean I couldn’t go away again! My journeys are not scary to me because I’ve done them so many times. I’ve got so capable at doing what I do that I know all the tricks; I know how to avoid psychotic individuals and how to avoid the bad drivers and all the rest of it.”

So what can be left to achieve for the bike adventurer who’s been round the globe seven times? Sanders’ final ambition is of a more cerebral nature. “I’ve pretty much been to all the places I wanted to go so my ambitions now are to try and make the perfect travel film, or write a better travel book; one that engages the reader in a more charismatic and intelligent way. I think if I achieved that and got good book reviews then that would be my ambition fulfilled.” 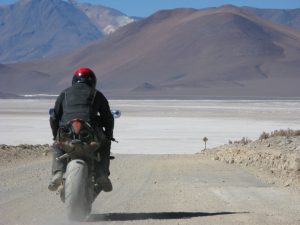 You can join Nick Sanders on various rides through exotic countries and leave him to worry about the logistics.

Check out www.nicksanders.com for details…

What’s the biggest challenge on your list of ‘things to do before I die?
To keep doing what I’m doing for a little bit longer. I know now that at my age, your hand-to-eye coordination begins to fail so I just want to keep going a bit longer.

What album or book would you wish for if you were stranded?
I don’t take books or albums with me when I travel. I don’t want to take my culture with me – I’d rather absorb the culture of the countries I visit.

What can keep you awake at night?
Not a lot. I’ve probably only had 10 sleepless nights in my whole life and they’ve all been work/stress-related.

What do you miss most about home when you’re away?
Obviously, I miss my kids but otherwise, nothing. If I started missing things when I was away I’d get in a bad mental state. I certainly don’t get nostalgic; I don’t care about London buses or red pillar-boxes or anything to do with my culture. I don’t take my culture or my issues with me. I shed it all.

What’s your ultimate indulgence?
Having sex with two women! Can I say that?

What’s your worst ever injury and how did you get it?
I’ve never had an injury worth mentioning.

What’s your best characteristic?
As far as egos go, I suppose I’ve got quite a modest one. And your worst? Self-absorption.

What’s your best tip for adventure bike riders?
Just do it. And smile a lot.

Any role models?
Robert Dunlop without question. He contributed to my understanding of what being a modest person is all about. He was very self-deprecating, very genuine, and very easy-going, but put him on a bike and he had something extra.

And finally, if you could have one superpower, what would it be?
I’d like to be able to write better.