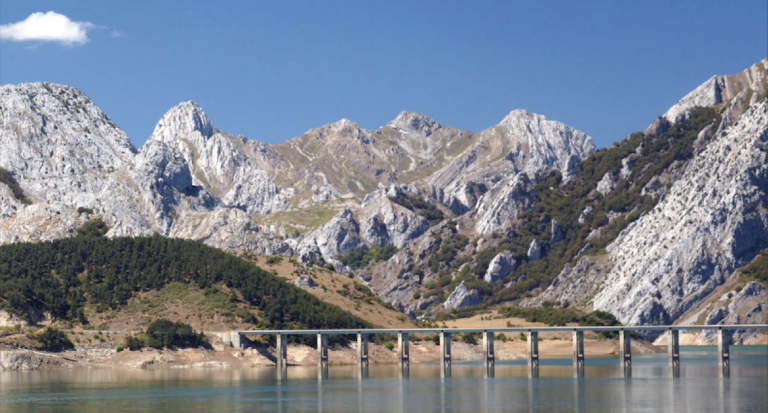 SHORT WAY DOWN AND RIGHT A BIT

Self-confessed Wild Hogs Gavin Griffiths and Duncan Gledhill live for their annual bid for freedom – a week-long adventure bike riding expedition. This year they take on Spain’s northern peaks with Colin Culley along for the ride… 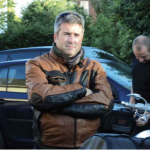 Gavin Griffiths is a writer and publisher from Stratford-upon-Avon. He has no discernible mechanical knowledge, a complete absence of directional sense and has the propensity to pack too much of the wrong stuff; on the face of it, not the best person to go touring with. A love of cider and a sense of humour sort of make up for it. 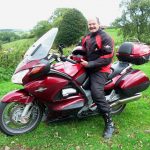 Retired headmaster Colin Culley has an encyclopaedic knowledge of practically any topic, a zest for exploring and a love of the natural world. His new-found motion photography skills make him the perfect travelling companion. He should consider renting himself out to bike tours, as he’d make a killing. 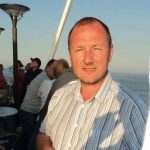 Duncan Gledhill’s a no-nonsense Yorkshire chap who gets things done. The linguist of the group, his ability to sort stuff out and eagerness to go up front and take responsibility give this internet entrepreneur from Scarborough unofficial pack-leader status.

I’ve known Duncan for five years. We did some business together once upon a time and discovered a mutual love of two wheels. Now, every summer, we leave our wives, kids, dogs, businesses and worries at home and push off for a week to get lost in a strange land and find ourselves. We make the trip up as we go along, stopping occasionally when we need a piss or petrol, or when we see an amazing view.

This year, it’s Spain’s turn to host us. We opted for the ferry as the French tolls make my soul sad and defeat the object. Twenty-four hours on a mini cruise or 24 hours grinding your way down the Route du Soleil? Brittany Ferries at £350 a head seems a price worth paying.

Duncan is a Harley man. He’s got a head-turning, pimped-upped VRod with Screaming Eagle pipes that brings everyday life to a standstill wherever he goes. 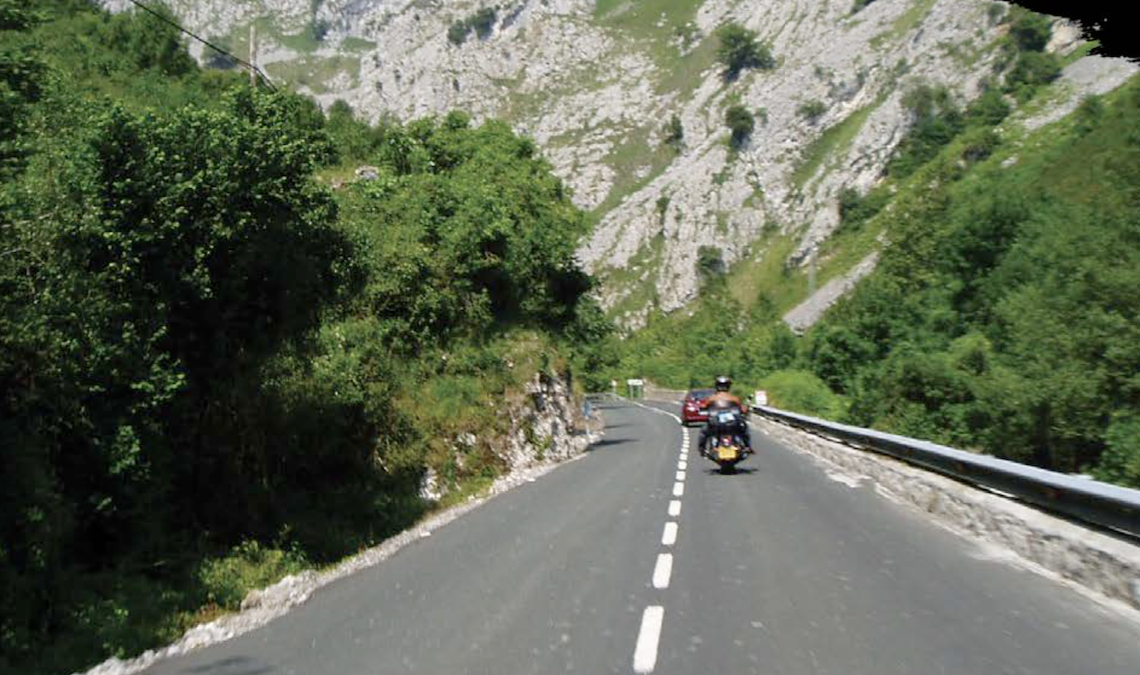 I’m on my Triumph Rocket, which doesn’t go round corners (even turning left out of my drive is a challenge), but in a straight line is like having all the pleasure in the world crammed into a syringe and injected straight into your lateral orbitofrontal cortex. It’s a whale of a bike and everybody photographs it, which is what it must be like being married to Cheryl Cole (sort of ).

In adventure terms we’re more Wild Hogs than Ewan and Charlie but the aim is to throw off life’s shackles, albeit temporarily, and live for ourselves for a few days. This year we invited Colin, Duncan’s neighbour, who purchased a Pan European for the trip, a bike which makes up for its total absence of soul by being practically perfect in every way – like the Mary Poppins of the bike world with a 400-mile range.

As is custom with these rides, the trip is largely planned on the ferry. The crossing from Portsmouth takes a day so there’s plenty of time to drink some beers and argue over the route. The lower deck on the ferry is full of bikes of all creeds and you can spot their riders lounging all over the ship with bad hair and a look of excited anticipation.

Most bikers go left out of Santander and head east over the Pyrenees or go right and aim for the Picos Mountains and northern Spain’s wilder coast. We flip a coin and the bike gods dictate that we do the Picos. Minutes later, we meet a fellow biker who informs us that the Picos are “fookin’ awesome” and not too busy this time of year (late June). So, with our course set and the ferry trip behind us, we get cracking and put in some motorway miles, to get into the good stuff. 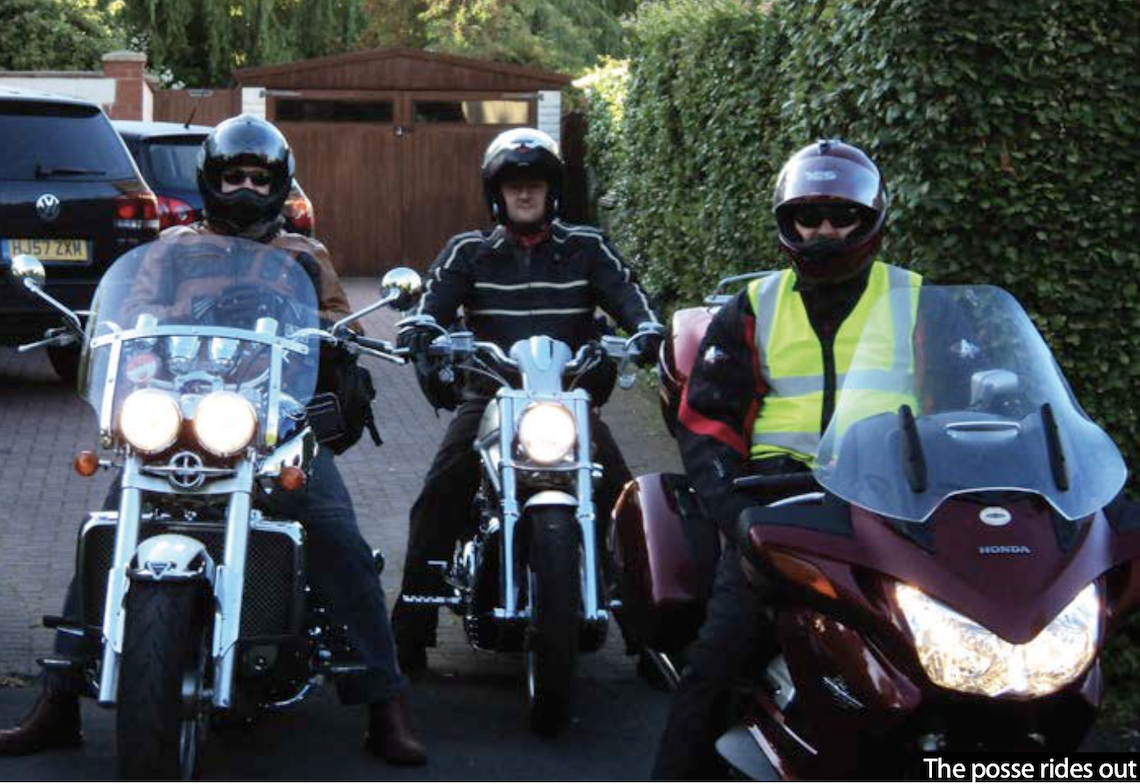 The coast immediately west of Santander is not pretty. It’s primarily industrial so the smart move is to come off the motorway after an hour and head south into the mountains towards Potes, which is a beautiful town at the heart of the range.

Soon the scenery changes to alpine with evergreens and sweeping meadows and the road follows the rivers and streams as it cuts through gorges and then up higher and higher through switchback, hairpin mountain passes. It’s more like riding a roller coaster than riding a motorbike and after a while my jaw aches from intense grinning. There are lots of other bikers here, all wearing the same grin, the cool micro-nod acknowledgement we have in the UK replaced by expansive joyous waves.

Gravel on the roads calls for lots of rear braking and low gears; although there are rails at the roadside, it’s exhilarating stuff seeing vertical drops and possible death only inches away. The temperature falls from 30°c to 12°c in just 20 minutes as you reach the top pass, which is 2,000m up and the snow-cap peaks seem only feet away. Our average speed drops to about 20mph, so we don’t make anything like the progress we’d hoped. At 8pm we’re bone tired and wet, due to a storm on the way down the south side, so we stop the night in a hotel in the twee little Roman town of Cangas to Onis. 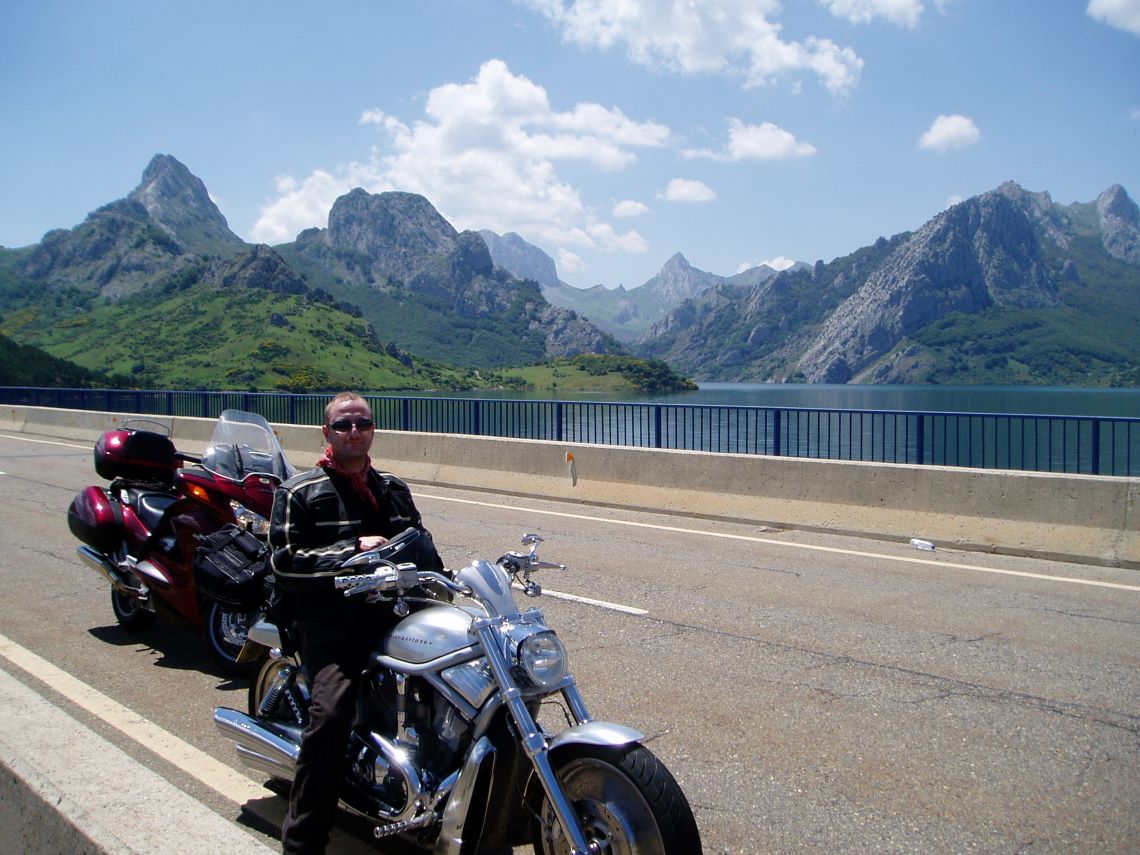 Accommodation in this region is pretty reasonable in June. Nearly every hotel we stay in is 4-star and comes in at 60-70 Euros per night. Bikers are welcome everywhere, and we learn that 20 percent of the Spanish population has motorbikes. We’re in good company.

The next day, we manage to lose each other going north-west back to the coast through the town of Oviedo. For me, this is part of the fun. I love travelling with friends but I equally love being on my own; it’s important when touring to break away every now and then and forge on solo. We always plan where we intend to stay each night and today we’re heading for Luaca, a postcard-pretty little Spanish fishing port, and eventually we all meet up just outside the town and swap stories.

We have a late lunch watching the English footie team get thumped while drinking the local tipple called Sidre; this is essentially home-brew cider, which the waiter tips impressively into a glass while holding the bottle three feet in the air.

This part of Spain is where the Conquistadores came to settle once they’d finished their comprehensive pillaging of the Americas and some fascinating architecture remains, a surprising amount of it abandoned and derelict. We stay in a stunning renovated mansion called the Hotel Villa La Argentina which used to belong to a wealthy plantation-owner. It’s a half-mile stroll up the hill from the port, which has lots of little bars and fish restaurants for evening entertainment.

The following day we head to Cedeira about 150 miles further up the coast in the north-west corner of the country. By now there’s little in the way of urbanisation and the views and roads are spectacular. We hug the coastline, zigzagging our way through forests and inlets and over towering viaducts. Cediera is the nearest town to San Andrés de Teixido which is a very famous tourist spot with 600m sheer cliffs that fall away into the Atlantic. We wind our way up perilous little roads, coming out above the clouds and in all my seven years of biking this has to be the best ride I’ve ever had in my life. We stay in a super-modern minimalist family-run hotel called Hotel Herberia. With undercover parking for the bikes and a delightful husband-and-wife team keen to tell us about the area, it’s clear why this place is so popular with bikers. 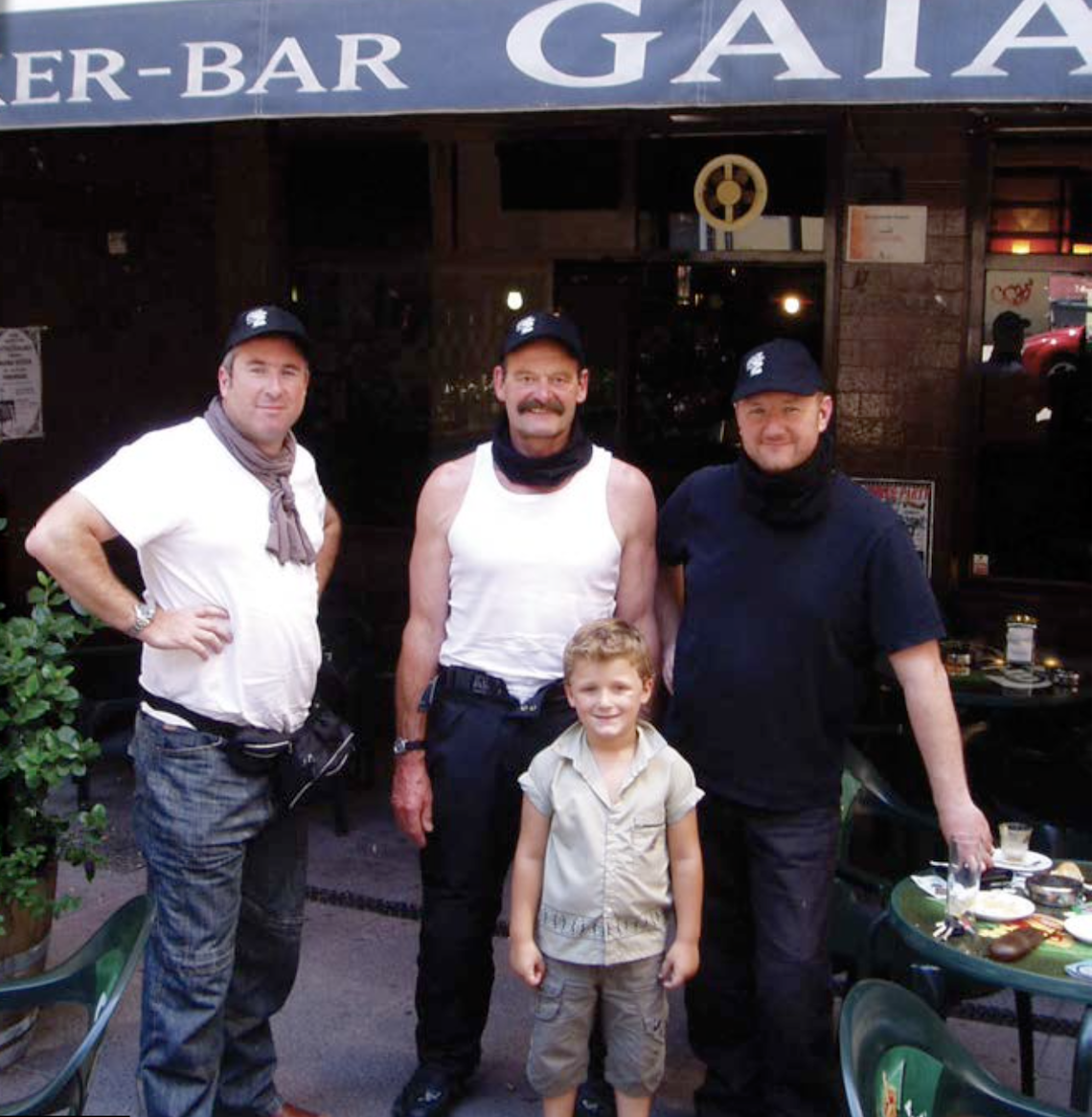 The next morning we head inland towards Leon and stay in a quaint medieval town called Astorga, the central square of which is on the ancient Pilgrim trail. We stay in a hotel on the square and spend the evening watching Spain win at football. The whole town is out and the atmosphere is like nothing I’ve ever seen in the UK. Entire families from babes in arms to gnarled, toothless crones are cheering their team on with positive enthusiasm – a world away from that air of violence and stupidity which seems present in the UK when England play. The party goes on into the small hours, and despite being obvious Brits, not once do we feel intimidated.

We spend the next day winding our way back to Santander and include a few farewell mountain passes because we know it’s going to be a year before we do it again. We enjoy the relaxed ferry crossing back to Plymouth and, after a four-hour blast home, by late afternoon I’m sitting in my office wondering if the last week was a blur. We’ve decided that we’ll go to Santander again next year, but chuck a left. 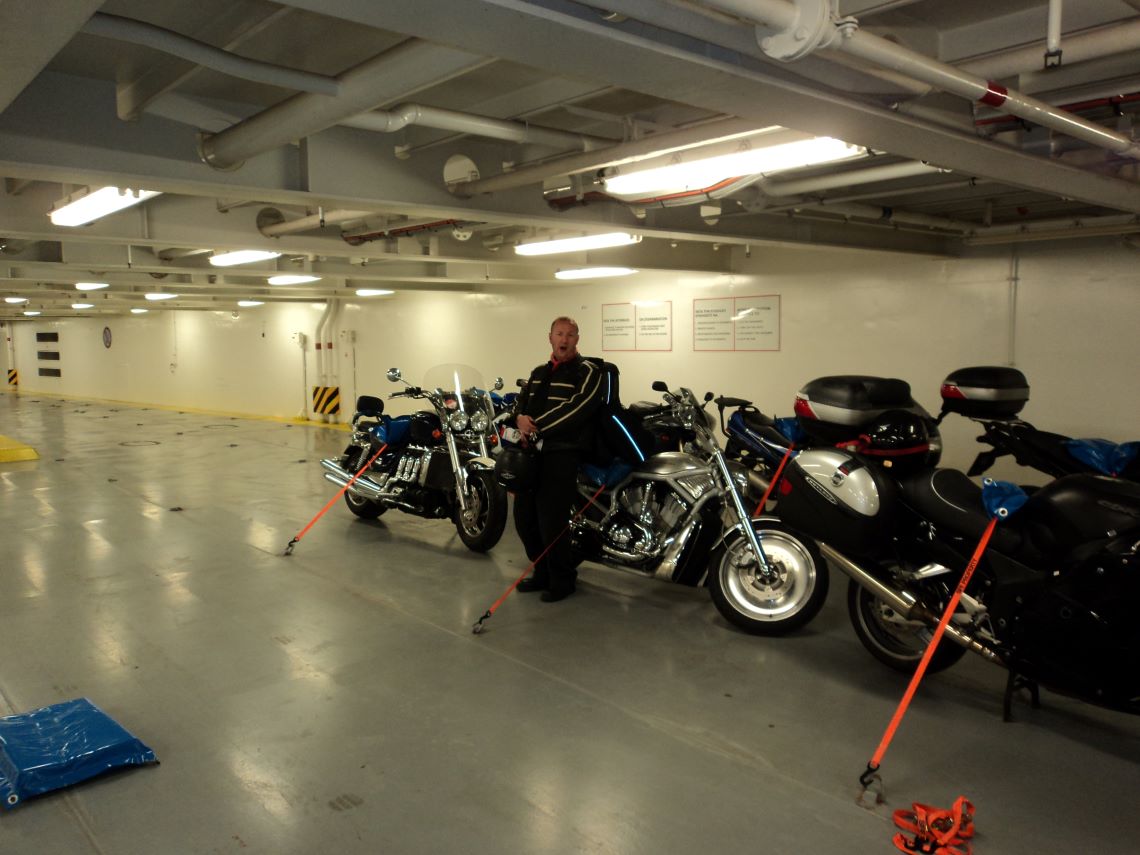 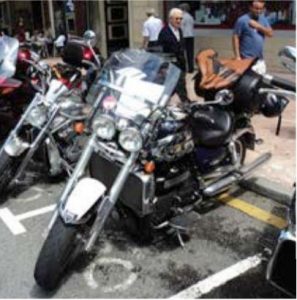 Yes it has a 2294cc engine and does 0-60 in just under three seconds. But it’s not just the speed. It’s this bike’s presence that makes it stand out. It’s beautiful. Not sporty or sleek but firm and confident in stature, like Kirsty Alley before she lost it. It pains me to admit that it’s not best suited to ripping up and down Spanish mountain passes and at one point the brakes just stopped altogether, which was unnerving. Not being mechanical, I have no idea why it did this and they started working again once I’d dismounted and talked soothingly to it in a layby, explaining that this sort of thing happens all the time and it wasn’t its fault and I still love it. 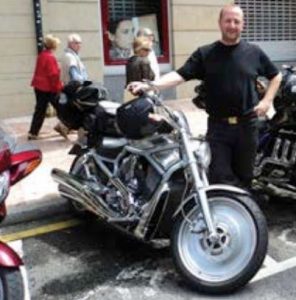 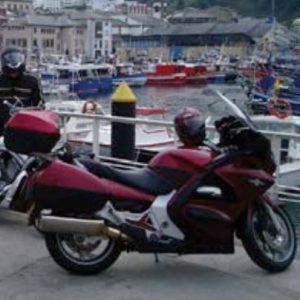 It has unimaginable luggage space, SatNav, 400-mile range, perfect handling, poised balance, a comfortable riding position. It keeps the rider dry in the rain, cool in the sun and speaks Spanish and Basque – the perfect touring machine. It’s as if the most technologically advanced nation on the planet had designed a bike specifically for the job of touring in the most comfortable and efficient manner. To my knowledge, nobody dropped an ice cream in its presence or flashed their breasts at it.

NOT MANY PEOPLE KNOW THAT…

The village of Bulnes can be found in Asturias, hidden away in the Picos de Europa. There are no motor roads to the village at all; until the funicular railway was built there in 2001, access to the tiny outcrop could only be gained via a two-and-a-half hour hike. With a full-time population of just 20 and more chickens than people, this is the closet you’ll get to a Nepalese-village experience outside the Himalayas.