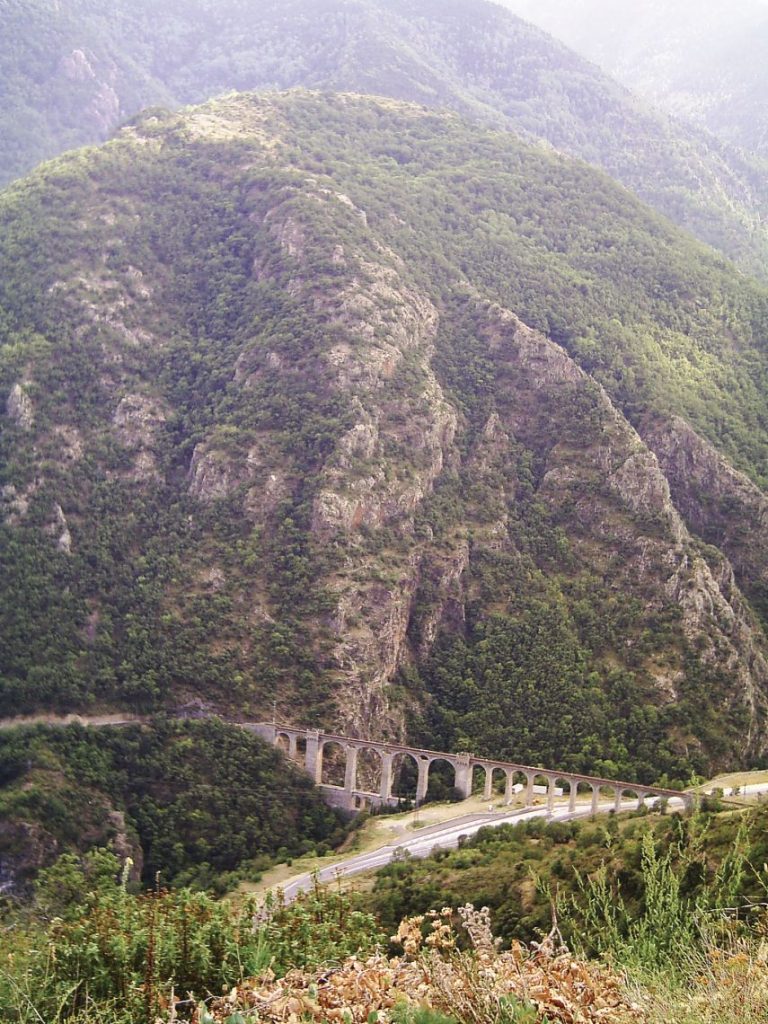 We met in Arborfield under gunmetal skies. Two men, two GPS units, and two (almost) identical motorcycles, a pair of DRZ 400 Ss, one old and one new. Departing only 10 minutes late, we progressed to Portsmouth via Sandhurst, Bordon and Longmoor. Crossing the South Downs, we were faced with blue sky, sunshine and the promise of a two-week, unsupported, unpredictable, off-road European adventure.

Arriving at Santander some 60 miles from our intended start point of Bilbao, we had a long motorway stretch before we could embark on some of the creative trails we’d planned, incorporating some challenging terrain, which tested both body and mind. Glorious 26°C sunshine made some of the difficult sections a bit sweaty and we struggled to find food, fuel and a place to sleep. Perseverance won the day though and from a peaceful hillside we watched the sea mist roll in over Meagas on the north Spanish coast.

The second day’s riding treated us to some great twisty roads in the morning sun, before we encountered the GI131 trail, which was vaguely reminiscent of one of the ‘three peaks’ in the UK, with technical rock steps. For every climb there must be a descent and these were no less challenging.

The trails were often narrow walking paths rather than the open trails that we’re used to. It was hard work, but immensely rewarding and as we climbed the views became increasingly spectacular. St Jean Pied de Port was familiar territory and we camped in the municipal site, ate pizza with the weirdest concoction of toppings and washed it down with warm San Miguel before retiring early to listen to the heavy rain bouncing off our ponchos.

We were blessed with some awesome open, fast and free-flowing trails on the third day, which could be taken safely at high speed. The trails had a loose gravel surface with tight hairpins accompanied by mind-focussing sheer drops. We completely missed the planned overnight stop at the quaint village of Longas, possibly because we were going too quickly and having too much fun, and instead found ourselves a sweet camp on a shallow sloping meadow near Biel. What a difference a day makes!

After an early start we were treated to yet more swooping trails and twisty B-roads. Everything was going so well, but after enjoying a sumptuous lunch by the Peña de San Miguel, it went downhill, quite literally. Shunning an easy mountain road round the valley bowl, we followed the GPS flags into a series of valleys. The trail was steep, winding and rocky. Before we knew it we were committed to a trail that would have been difficult on foot, much less heavily-laden motorbikes.

After two awkward river crossings and fighting through the bush, we were beaten. A foot-recce in blazing 30°C heat confirmed the worst; having spent in excess of two hours covering the 6-mile descent to the valley floor, the onward track out of the valley was impassable. Four-and-a-half hours later, fuelled only by Jelly Babies and with empty Camelbaks, we finally reached the top again, beyond exhaustion, bruised, battered and broken. It was all we could do to ride back down to the main road to refuel at Nueno, rehydrate, eat and stock up on provisions.

After the exertions of the previous afternoon, we pushed on and reached Boltaña by lunchtime. A mainly road section followed, past Campo and Castlejon de Sos along the wondrous N260, the best motorcycling road in Europe, with its twisty roads between towering cliffs and deep ravines. Deciding to call a halt before Pont de Suert, we treated ourselves to an overpriced campsite at Bonansa.

A deliberately planned road-intensive day followed, to get us across to the Mediterranean coast. We continued to ride along the beautiful N260, managing to squeeze in some cheeky trails before crossing into France mid-afternoon, when it felt like someone had left the fridge door open as we hit the positively cool French alpine air. We pushed on along trails towards Perpignan until we could ride no more, halting shortly before dark at Vernet les Bains.

We were up relatively early the next day, mainly to avoid the myriad biting insects. We reached Perpignan by lunchtime and immediately the scenery changed to flatlands punctuated with small hills. Riding east from Santander to Perpignan and then north to Calais, we found ourselves in wine country, sampled the grapes and pointed out the wineries we recognised.

That evening the skies darkened and a terrific thunderstorm broke so we bolted for Villegly and holed up in a campsite to avoid the worst of the downpour.

With over 1,000 miles done, we were at the halfway stage. We started off with winding country roads and tricky rocky trails before a madcap dash to Mazamet. The ever-changing terrain was becoming increasingly agricultural and the trails took on a different character, with delightful sunken roads like those we used to enjoy in the UK before the NERC Bill ruined the country.

After 1,000 miles our tires were shot and we pulled into Dafy Moto in Albi, where we were greeted like long-lost friends. On fresh rubber and with much lighter wallets, we headed back out into the countryside for another night wild camping under the stars.

We spent a morning passing through a relatively indistinct area of France on routes that included too much tarmac, some fast gravel and shady rocky trails. Taking lunch near Nuces, the sun continued to shine on us as we listened to a local biker who warned us about hailstorms, flash-floods, landslides, and a 102kg wild boar.

Nevertheless, so pleasant was the mid-afternoon sunshine, that we took time to cool our feet in the River Lot.

Trying to avoid the Aurillac traffic, we headed for a scenic campsite overlooking a viaduct, to wash our troubles away with several beers and a hastily purchased pizza. As the scenery changed the next day, so too did the wildlife. Goats had given over to sheep and ultimately cattle.

We were surprised to see a clutch of pigs run across the road ahead of us, but not as much as when we saw an Adder basking on the hot tarmac, which would have been a good meal for one of the many birds of prey we flushed along the trail. 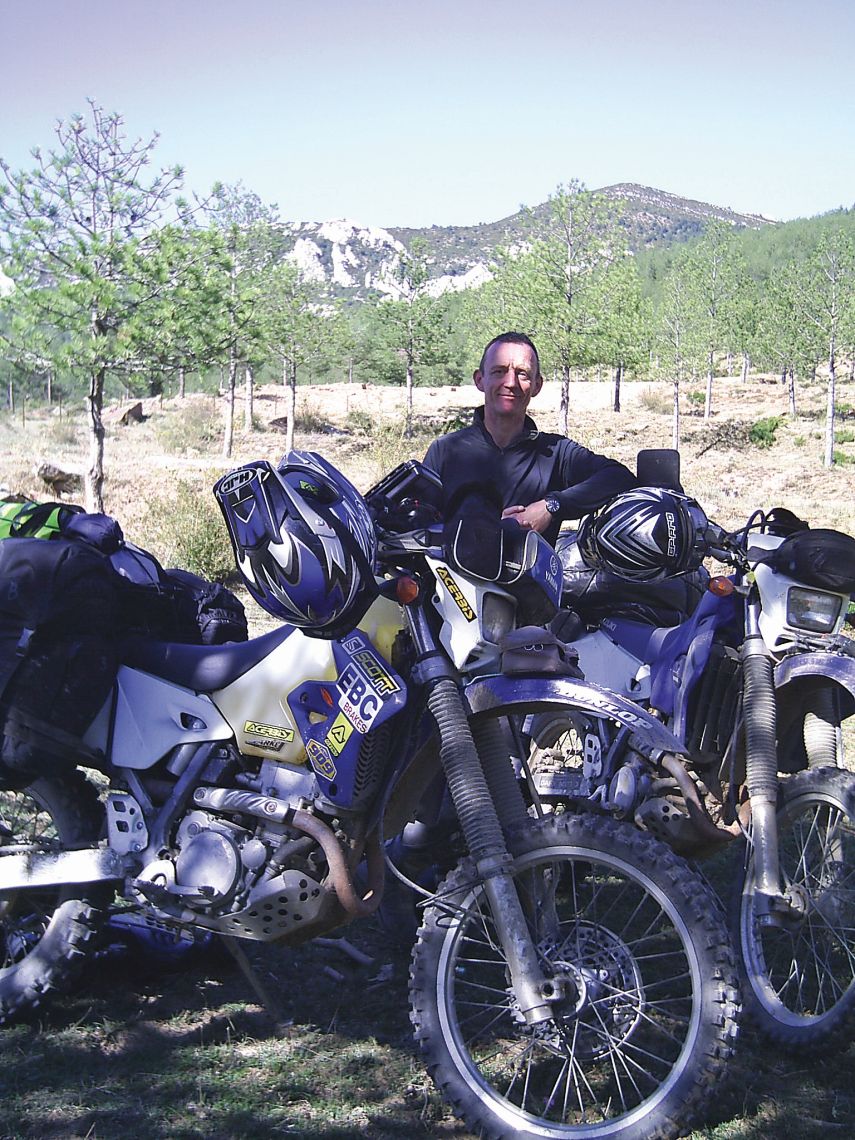 Our progress was hampered by Martin’s shoulder injury, which he’d sustained earlier in the trip falling off at a standstill and been aggravated by further falls on technically rocky climbs. Obviously in pain but determined to continue, he was trying to hide his discomfort. We ran before a storm that ultimately caught us, turning the route into an ice-rink.

It looked like a covert forest camp was likely until we hit Vierzon, where we refuelled and gave the bikes a quick wash to get rid of the worst of the mud before finding a campsite for the night.

The arrow-straight trails through the arable land of northern France were fast and enjoyable but the amount of Propertie Privé signs was frustrating. It was more encouraging to see the odd Chemin de Commune, Circulation Authorisée (shared path, traffic allowed), something you’d never see in the UK and allowed us to make rapid progress.

Miles and miles without coffee didn’t help morale but we ploughed on towards Paris. We finally managed a 200-plus mile day in less than 10 hours and dined in style in Houdan before sprinting for a campsite just 90 miles from Le Havre.

As the planned route then headed east across the top of Paris towards Montdiddier, Cambrai and ultimately Calais, we called ‘trails end’ at 1,875 miles in order to save us a slog around the M25 to get back to Arborfield at the end of the trip and prepared ourselves for a road run to the port.