The best of Cumbria 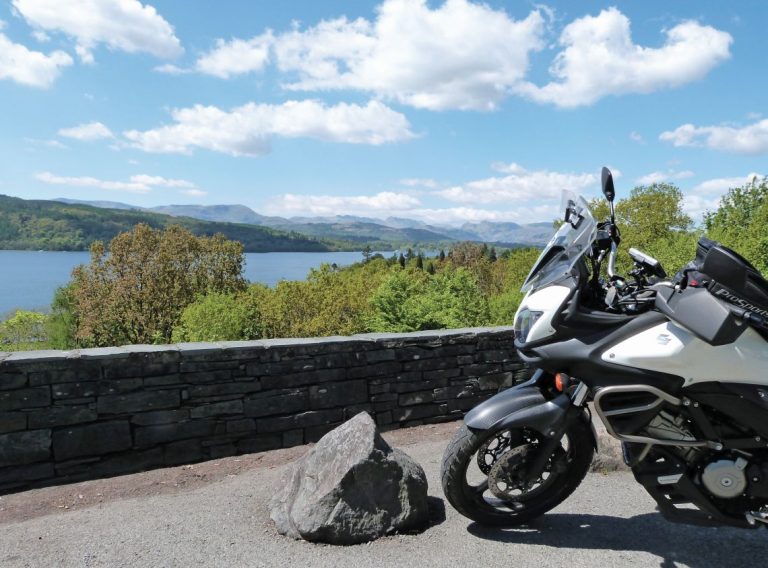 James Owens is on a road tour of the Lakes, taking in the best biking passes the district has to offer

The S1 nerve is something you’ve probably never heard of and I hope for your sake that you never do. It’s the main nerve that runs from the base of your spine down into your backside and right through your leg into your foot. I injured mine with a ruptured disc, slipped disc in old money, causing a pinch on the nerve.

However, ‘pinch’ doesn’t do the sensation nearly enough justice when a sneeze will literally bring you to your knees in debilitating agony. What has this to do with Cumbria? Well, it seemed fitting that having spent three long months out of the biking game and flat on my back, the first place I wanted to go and see was Cumbria’s rolling fells. It’s a human failing to not fully appreciate what you have or what you’re capable of until it’s taken from you. My advice? Ride, enjoy and smile.

The Lakes are a playground, as all national parks are; this one is the biggest in England boasting around 885 square miles of dramatic rolling fells. The Lakes sees over 15 million visitors per year (most of whom I met on the M6 over the Bank Holiday weekend), bringing around £925,000,000 in revenue to the area per annum– now that’s a lot of Kendal Mint Cake! The Lake District is home to 1,760 listed buildings, so it’s more than possible to expand on this mini-adventure, but I looked at the roads that I love most and made a route of 125 miles.

According to Google, it takes around four hours – if your surname’s Pedrosa. I’d give it a good weekend and enjoy the sights of the towns as well as basking in the wonderfully twisty gradients of up to 25 percent and some of the best views in the UK.

Starting at what I call the ‘Heart of the Lakes’, Windermere is the biggest natural lake in England at over 10 miles long and 1 mile wide, dropping to 220ft. The shore is full of small tourist towns and Windermere offers many a boat trip to help you to rest up before taking on the fell passes.

If the sun’s out, grab and ice cream and take a lakeside pew to soak up the vista. The town boasts hundreds of outdoor shops and the odd knick-knack store to browse around; there are also plenty of tea rooms to sample. I’ve been here before, however, and know what roads are waiting for me, so I’m eager to get off and stuck in!

Head north up the A591 and the A593 taking care, as the traffic can be very slow with tourist drivers distracted by the view or looking for a parking space with the kids screaming in the back. There are a few 20mph sections on the road out of town and they’re enforced during peak periods, so keep an eye out. Set your satnav for the little town of Boot and let’s go play on the fells.

Heading to Boot will take you up and over two wonderful passes, Wrynose and Hardknott. Wrynose is a single track with high stone walls and tight bends before you make it to the climb for the valley. Take it easy as this route is also popular with the 4×4 drivers and the Mazda MX5 day-out club. I had to hit the brakes a few times, and even though I had the right line, it doesn’t mean the numpty in the metal box coming the other way does.

It’s also very popular with walkers and horse riders, so a little extra caution is a good thing; never ride faster than you can stop in the distance that you can see is my mantra. Wrynose is one of the steepest roads in England with a gradient of 1:3 and at the top of the pass is the Three Shire Stone that marks the meeting point of the historic counties of Cumberland, Lancashire and Westmorland.

This road was used by the Romans and leads onto the ruins of a Roman fort located up on Hardknott Pass. A little research reveals that ‘Wrynose’ means ‘Pass of the stallions’ due to the need for a big, powerful horse to get over the gradients – I have about 70 horses packed into the WeeStrom, so I’m not overly concerned by the etymology.

You’ve made it over Wrynose and now you’re crossing over a stone arched bridge that takes you over the river running parallel to Wrynose. You’ve evaded the Hardwick Cumbrian sheep and survived Mrs Beckham’s Range Rover. You’re now looking up at a mountainside and trying to see the road – then you spot a car coming down, disappearing and then reappearing to take on another corner.

Hardknott Pass runs at about 33 percent and there are plenty of road signs reading ‘25%’ – so what does this mean for you? If you’ve not tackled this kind of gradient before then just be aware that if you stop, the side stand won’t hold your bike. Leaving it in first before turning off the engine won’t cut it either unless you fancy watching you prized possession slide down the road with an expensive-sounding grind.

As you ascend the pass, take the corners at the widest possible point so that you sweep out and cut back in, to lower the angle of the turning circle, and keep the power on as you feather the clutch to supply that power. Needless to say you also need to make sure you have plenty of tread on the tyres!

If you’re unsure about this kind of riding then go to the ABR forum at www.adventurebikerider.com and see if anyone fancies a day out – taking another more experienced rider’s line may help and give you confidence. Once you get to the top of the pass, I thoroughly recommend congratulating yourself with a coffee or a spot of lunch at the Woolpack Inn. I always make a point of stopping here, even if it’s not lunchtime.

You can turn right and head directly towards Egremont as you join the A595 or you can head left and indulge in some more fell passes. Head down the A595 for about 1,000m and on the left again you’ll see a sign for Corney Fell. You’ll get some amazing views from the top of Corney, but have a look up before you take the road; if you can’t see the top of the fell for cloud then leave it be. There’s a lot of wildlife up that road and the blind dips and corners take some planning.

You want to head for Bootle next on the sanav as it will bring you back to the A595 for the town of Egremont. Continue past Egremont on the A595 and aim for Whitehaven. It’s a busy little place with a long shorefront to walk down and great fish and chips to boot. There’s also a lighthouse that turns various colours in the evening. This is a wonderful place to chill out and you can also stock up on any necessaries with major supermarkets in town.

It’s hard to get lost in Whitehaven owing to the grid system that it was built on by the Lowther family – this was inspired by Christopher Wren’s design for London when it was rebuilt after the great fire in 1666. Whitehaven was the last place in the UK to be attacked by American Naval forces during the War of Independence. There’s also a small church in the middle square courtyard where Mildred Warner Gale is buried, a resident of Whitehaven and also the grandmother of American President George Washington. A little something to ponder over your fish and chips, perhaps?

We’ve had some culture and history so now it’s time to play on some roads and take in some views. Take the B-roads up towards Frizington, which will lead you onto the A5086 for Cockermouth. Despite being an A road it’s a beautiful little winding road that will see you cutting through a group of old mining towns. Cut back down the B5292 and things will get interesting. Once you get past Buttermere, the B5289 becomes Honister Pass.

The road runs right past Buttermere Lake, and after all, this is the Lake District, so you’re going to see plenty of them. The colours of the landscape will change as you pass through here and you’ll begin to notice more greys and purples. This is due to the high slate content in the area.

On the climb out of the valley you’ll be able to rest at Sky Hi Cafe where the world-famous Westmorland Green Slate is still produced. It also has a most wonderful view from the car park looking down the main valley that’s not to be missed. Refreshed, you can keep playing on the passes that will lead you past Derwent Water and all the way to Keswick.

There’s so much to take in that I really do recommend a whole weekend to do this trip and enjoy the places and people to the full. Take the A66 out of Keswick heading towards Penrith and cover the miles as you reflect on all you’ve seen. Not too much of the A66, though, as that’s just the main long, boring road that runs across the top of England and follows Hadrian’s Wall. Head down the A509, a very well maintained dual-lane road with wide, open views of the district and miles of forests, hills and mountains.

There’s nothing technical or dramatic about this road, just the pure visual indulgence of cruising through a national park at your own pace. Enjoy the moment as the road takes you all the way down to Ullswater. Swing a right onto the A592 aka Kirkstone Pass and you’ll find yourself in a photographer’s dreamland. On one side is water contrasted by a sleek grey road and greenery on the other.

The backdrop to this ride is the stunning Cumbrian skyline. I was about to show my age and remind you to pack plenty of film for your camera, but then caught sight of the box of SD cards on my desk; Cumbria has a way of transporting you to the past without you even knowing it. Time and tide wait for no man (or woman) so gather ye rosebuds while ye may and play on your motorbike at least once a day. The A592 brings you all the way back home to Windermere and completes this little tour of the largest national park in England.

You can become a Knight in Cumbria. Piel Island off Barrow in Furness is home to the Ship Inn. The pub’s landlord is known as the King of Peil Island who, for the price of a round of drinks for all present, can make you a Knight of Peil Island. This also means that you’ll be fed, watered and boarded for free if you ever find yourself shipwrecked on the shores – I wonder if that offer extends stranded ABRs? Hmm Sir James of Piel Island… I like it!

Windermere Club Site Ashes Lane Kendal Cumbria LA8 9JS Tel: 01539 821119 From £16 a night This site is part of the Camping and Caravan Club but non-members are welcome

I work on a Garmin Zumo 660, and of course, satnavs are only good as guides – always read the signs!
• Windermere
• Boot
• Egremont
• Whitehaven – If not taking Corney Fell
• Frizington
• Cockermouth
• Buttermere
• Keswick
• Glenridding
• Windermere