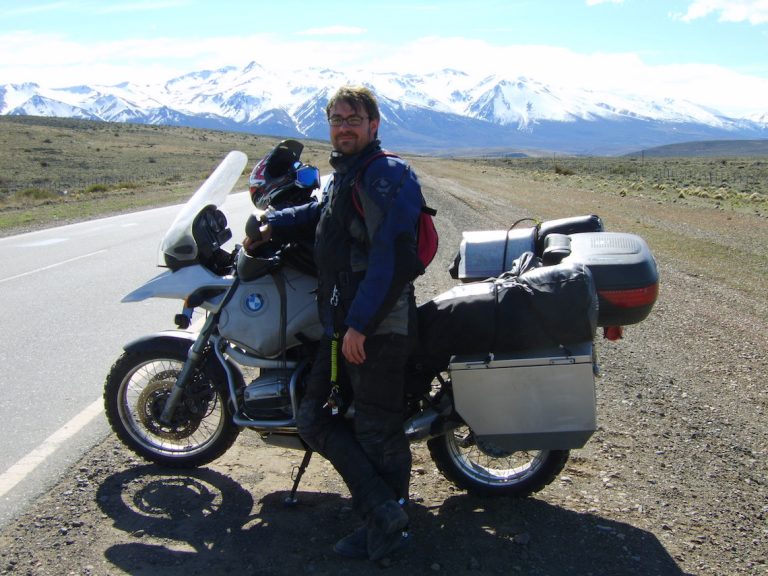 MOST EXPENSIVE MOTORCYCLE ACCESSORY EVER BOUGHT? Set of Project VND panniers for our BMW1150GS travel bike

LIFELONG AMBITION? Overland more. Tallinn (Estonia) to Kamchatka (Russia) and back first, then another trip to the Cape and back. Then, who knows, but there’ll be others. Oh, yes. There will be others!

IDEAL TRAVEL PARTNER? My wife, and our dogs (hence the Ural)

MOST DANGEROUS MOMENT? There are two actually. Near-heart attack number one was after riding a 100 miles two-up on French motorways without knowing that some lowlife had tampered with my front brakes, only to find out when I tried to use them (thank goodness for engine braking). Near-heart attack number two was while riding the Argentine Ruta 25 in gale force, shifting crosswinds. I almost bought it on numerous occasions… don’t go into the light!

MOST MEMORABLE MOMENT? So many! Probably seeing the whales of the Valdes Peninsula (Atlantic Coast) breach ahead of us in the bay

WHAT DO YOU MISS MOST WHEN TRAVELLING? Any song I suddenly want to listen to while on the road, which is guaranteed to be on a CD back in Tallinn. It’s hard to scratch that itch…

FAVORITE CRAP JOKE? Why did Edward Woodward have four ‘ds’ in his name? Coz otherwise, he’d have been called “Eewar Woo-war”