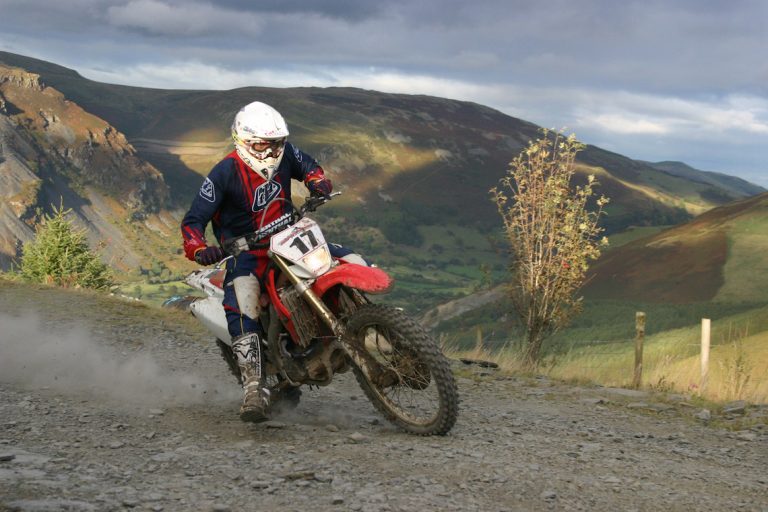 Do you yearn to earn a living from the seat of a motorcycle? British Enduro legend Mick Extance has seven Dakars under his belt, five finishing medals and a passion for bikes that’s abound. Now he’s imparting his hard-earned wisdom and skill at the Mick Extance Off-Road Experience. ABR’s Emily Brain went to dirt bike school for the day…

‘Best office in the world, that!’ beams Mick Extance as he pulls the transit to a brief stop midway up a steep shale track. Leaning out the cab window to get a better look at the scenery, I have to agree. We are, for all intents and purposes, on top of a mountain and I’m struggling to conjure a more picturesque view. The valley gapes below us in a steep decline and the farm buildings we left just minutes ago now resemble mint imperials nestled in the green landscape. Great hulking hills dotted with rocks and sheep rise majestically in every direction, and to top it off, the sky is a brilliant cobalt blue – not a cloud in sight. Quite a feat for Mid Wales.

Of course, as at home as he is in the Welsh countryside, it’s not this particular terrain that’s synonymous with Mick Extance. Following years of competing in the British and World Enduro Champs (Mick took part in his first motocross race at the age of 15 wearing a ‘stand-out’ red woolly jumper his mum knitted him; he never looked back), Mick’s taken gold and silver in the ISDE,
and in 2002, he won the European Enduro Championships. He signed himself up for his first Dakar the same year with nothing but the sheer determination to compete. “In 2001, I lost my dad to cancer,” Mick explains. “That’s when I knew I was going to do this crazy race that I’d been dreaming about since I was 17.’”

Throughout his racing career, Mick worked in construction and raising the £26,000 needed to enter the Dakar while supporting his family was a challenge. Thanks to a very enthusiastic Mrs E, some long nights spent drumming up funds on the internet and the help of Rally Raid’s Paul Round, Mick was off to do his first Dakar just 12 months later.

As it turned out, raising the money was small fry compared to what awaited Mick in France. “Christmas morning 2002 we opened our presents and by Christmas afternoon me and my mate were off down to Calais in a van,”he says.“Turning up at the start of the rally was the scariest experience of my life. I had no idea it would be such a circus. Scruti- neering usually takes 10 minutes; I was there for 10 hours! I came out with a map, road book and GPS – which I’d no clue how to use – wondering what the hell I was doing.” 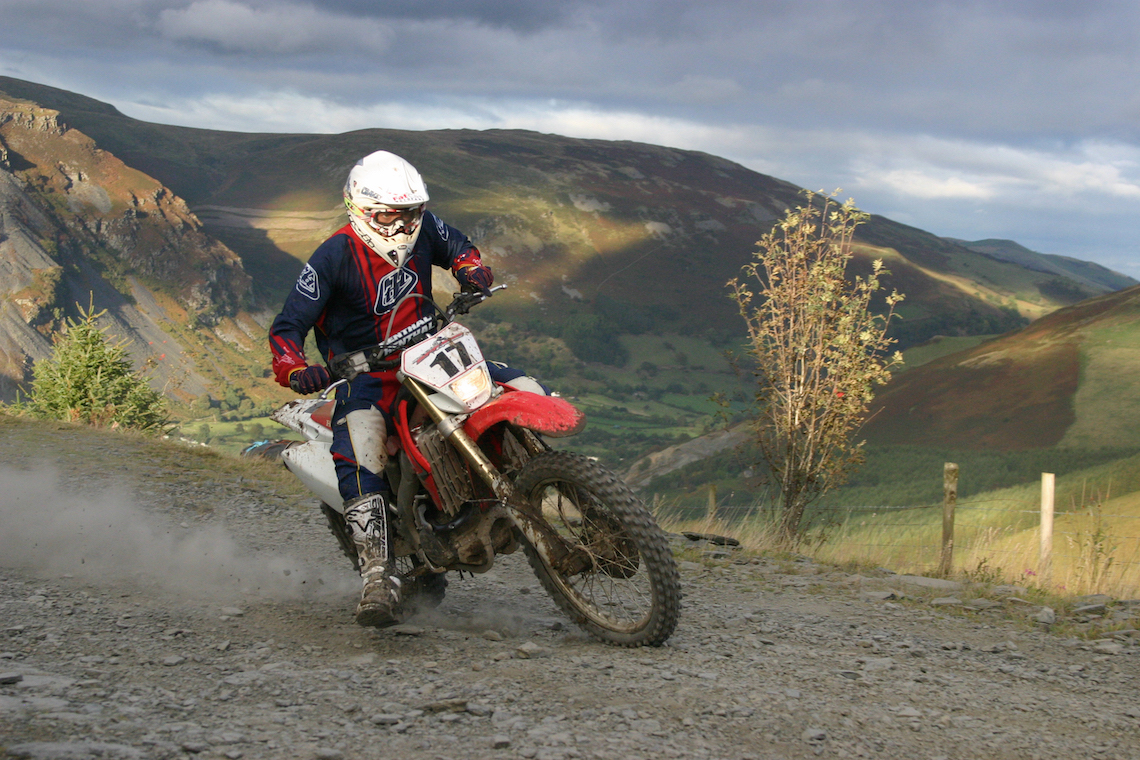 Undeterred, Mick ploughed on, despite having packed for his summer hols. “I couldn’t understand why everyone had so much clobber,” he says. “Africa’s hot, right? At least that was my thinking!”The next day’s 500km ride in pouring rain saw blokes donating their coats to soggy Mick from the side of the road, and things weren’t much better come bedtime. “I’d arranged to meet my man with the van at the end of the stage but hadn’t accounted for the people – it was chaos!” Mick says. “I finally found him at eleven o’clock that night and slept on the floor of the van in my soaking wet kit.”

He did the same thing for the next three days and nights until reaching the ferry to Algiers, which is where he waved goodbye to his support vehicle and the real adventure began. “I was totally terrified when we got to Africa,” Mick admits. “I did the first few days navigating on instinct because I still had no clue how to use the GPS or road book.”Then came the infamous desert stretch. “I like riding sand, it’s my favourite kind of terrain, but I wasn’t prepared for how f-big the desert is!” he laughs. “I did the first 60k or so, then I looked up and thought, ‘shit’. I couldn’t see anyone. Nothing. No bikes, no dust clouds, nothing. Even my tyre tracks were slowly disappearing in the sand.”

One bad call and it could have been curtains for Mick. “I knew if I got lost in the desert and ran out of fuel I could die there,” he admits, “but I just couldn’t let my head freak me out.” Sucking it up, Mick rode on into the nothingness for another 50k before miraculously hitting the checkpoint without any navigational aid. “That was an awesome moment in my life,” he recalls, “and it taught me to respect the desert; I needed that.” Despite riding by the seat of his pants, Mick finished the stage in 28th place, and although he was unable to complete the 2002 race owing to bike difficulties, the Dakar bug bit him hard. “It’s unlike any other race in the world and it’s a privilege to ride,” he says, emphatically.

I could spend the next 10 pages telling you about Mick’s outrageous Dakar exploits and adventures. His bike breaking down and hitching a lift with some locals; narrowly avoiding a desert lynching for sounding American; having to blag his ticket home after his bike died and remortgaging his house not once but twice to have another go at the race; finishing in 26th place in 2006 and never once outside the top 50 in six years… I could. But instead, I suggest you go see the man himself and let him show you firsthand what he’s learnt about surviving the world’s toughest terrain on two wheels. An uphill backie from Mick’s an experience, I can tell you! 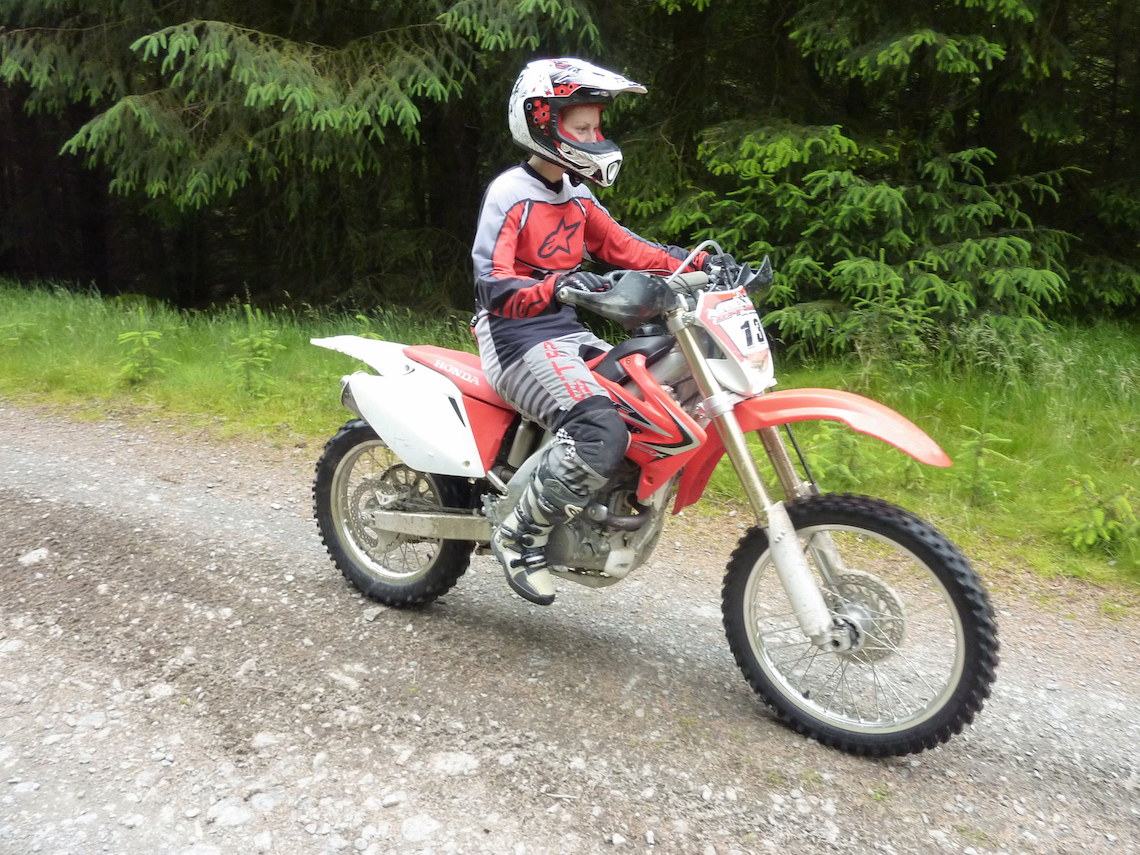 The village of Llangynog, Oswestry, has been home to the Mike Extance Off-Road Experience for the last three years. In 2009, Mick decided to hang up his desert boots (temporarily) after a chance meeting with fellow ABR Steph Jeavsons inspired him to pursue another dream. “I’d been thinking of setting up my own off-road school for a while,” he explains, “I did an Enduro day with Yamaha when I was about 24 and I loved every minute of it.” It was while doing some off-road coaching for Enduro Africa that Mick met mortgage broker Steph and over a Chinese they cooked up plans for an all-new off-road riding experience. When Steph returned from Africa, Bog Dog was born. Thanks to the support of Pidcock Motorcycles (Mick’s then employer) in the form of six Hondas for hire, Steph said goodbye to mortgages and she and Mick began running off-road coaching at Fat Cat Motocross track in Doncaster. Soon after the Llangynog site came up for lease and was too good an opportunity to pass, so the school moved to Wales and six months later Honda got involved, Bog Dog became the Mick Extance Off-Road Experience, and the rest, as they say, is history.

The school aims to make off-road riding available to everyone, no matter what their previous biking experience and Mick’s passionate about achieving this goal. “You’re the perfect example of my great day,” he grins. (ABR’s Em blushes – awww thanks, Mick!) “Seeing someone go from never having ridden a bike before to them leaving with a great big smile on their face is the best part of this job.”The school doesn’t just cater for two-wheeled virgins, though, and some of the shale mountain tracks and deep, watery bogs are enough to give even the uber hardcore a run for their money.

Mick runs six or seven Enduro school a month at Llangynog, usually Friday – Sunday, as well as Trials and Motocross schools during the week in Staffordshire and Silverstone respectively. A typical day at the Enduro school sees Mick meeting his wiling band of off-roaders for breakkie in the village before taking them up to the ‘office’ on top of the mountain. There they’re introduced to one of the school’s 17 Honda CRF 250s and kitted out from head to toe in helmet, gloves, boots and padded jeans and jersey. A morning’s basic training, including positioning on the bike and technique, is always followed with an afternoon of free trail riding and a timed lap or race, but the aim is very much about developing long-term off-road riding skills.

“Unlike other schools we don’t have ‘levels’” Mick explains. “Everyone learns and rides together. It’s really important that everyone has the same opportunities, especially if you’re riding with friends, otherwise you’ve discouraged half the group before you’ve started.” It’s the same positive can-do drive and determination that’s got Mick through seven Dakars, and it’s contagious. The total faith he has in his students means that in no time at all they’re tackling trails they never dreamed they’d conquer. “We deliberately pick challenging routs,” says Mick. “We believe every rider can complete them and they’re always on top of the world when they do, which really builds confidence. It’s an aggressive school; we move fast and taking people out of their comfort zone is a great way to learn quickly.” I can vouch for this. One off and six hours of riding later I’m totally hooked with my sights set on Morocco! 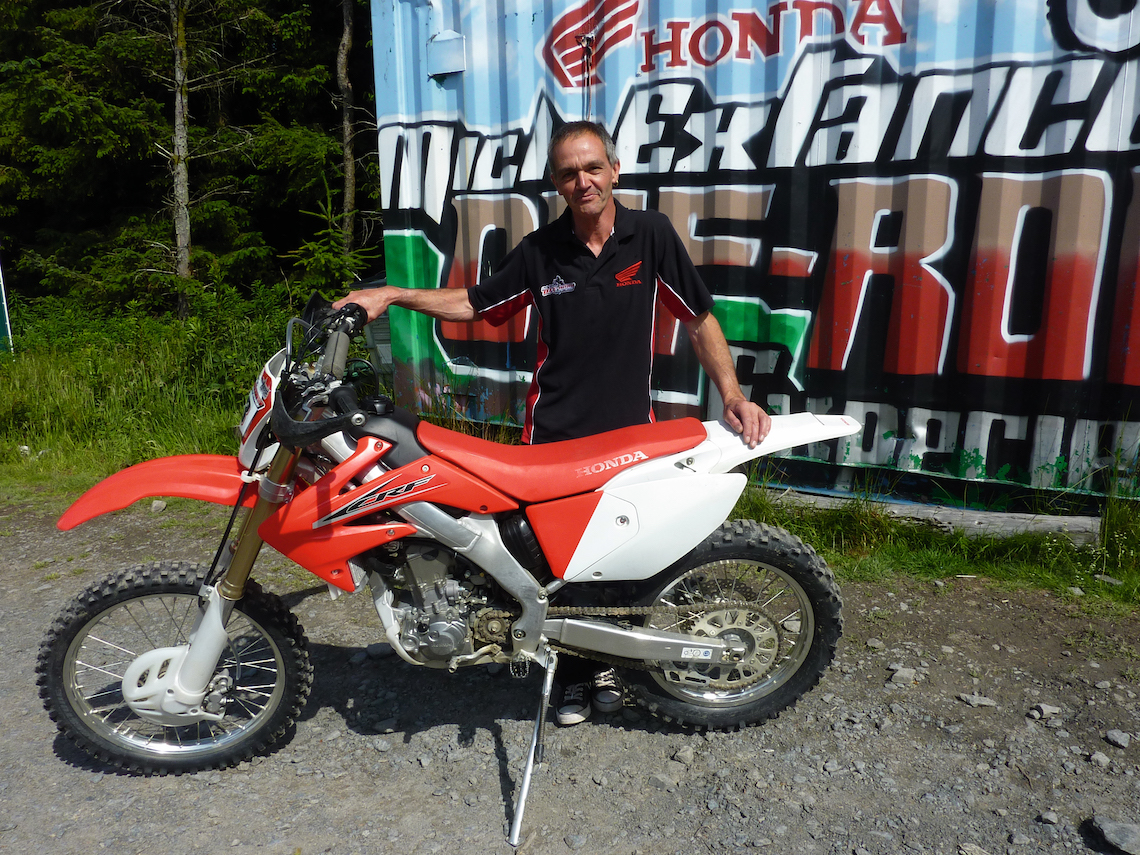 A taskmaster he may be, but Mick’s still in tune with individual riders. “I have to be able to read people well,” he explains.”It’s just as important not to push people too far as it is to challenge them.” Only two students have ever dropped out of a day’s riding with Mick, but it’s something he still finds hard to deal with. “I have to accept it’s not for everyone,” he says. “But I hate it when I lose students. I take it really personally, because in my mind I’ve failed to give them a good time on an off-road bike, and that’s what I set out to do.”

The ups far outweigh the downs, however, (although ask Mick first thing on a Monday morning when he’s got 17 bikes to clean and service, along with 30-odd piece of kit to put through the wash and he’ll probably tell you a different story!). He’s been taking groups to Morocco since 2003 but last year was the first trip through the Mick Extance school, which was a huge success. “It’s a fantastic place to ride,” Mick says with a huge smile. “The dunes are a very special place.”The route follows some sections of the Dakar and offers riders the chance to experience rock, sand and solo riding, something Mick reckons everyone has to try once. “It’s really weird riding completely alone,” he says. “It’s not often you get 80k stretches of total solo off-road riding; it’s definitely and experience.”

Among Mick’s graduating Morocco class is one rider he’ll never forget. “The chap was in his 40s, had never been abroad and still lived with his mum,” Mick recalls. “I think she even packed his suitcase for him. He came on the trip because he said he wanted to change his life. It was really hard going for him, but he did it. And you know what? It did change his life. That guy was an inspiration to me.” So what’s Mick’s advice to anyone with Dakar aspirations? “Just do it,” he says. “I’d ‘like to’ isn’t even a word. If you want to do something, really want to, then do it.”With that in mind, Mick, where’s next for the Off-Road Experience treatment? “A school in India,” he says after some consideration. “High altitude and totally different terrain.” And as for the Dakar? “I’m having another crack in 2013,” he grins. You heard it here first, kids!