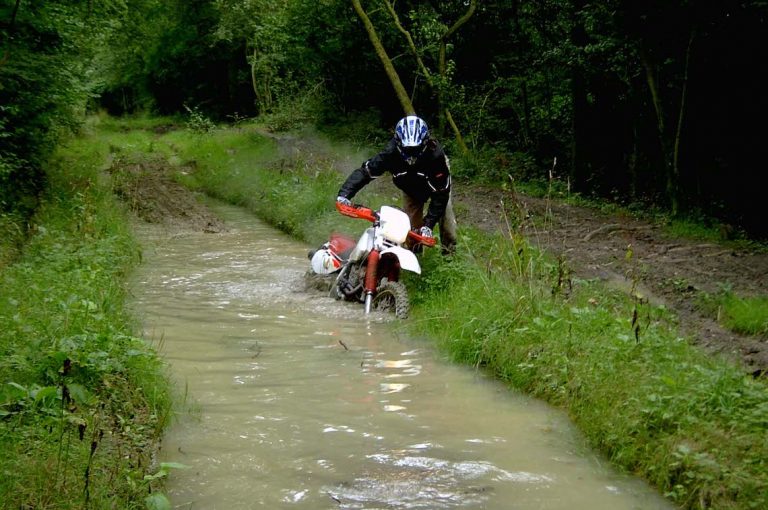 TV’s Dr Mike Leahy is an ABR and all-round clever clogs when it comes to waterborne nasties. He’s got some tips on staying uncontaminated when riding abroad near the wet stuff.

Let’s face it. Even the most hardened ABR doesn’t go on a long overland trip just for the riding. There’s the culture, the climate, and perhaps the opportunity to kick back and spend some time on the beach. Even when on the road, it’s hard to resist a refreshing dip in a cool lake, or a five-minute stop to chill out in the breakers – and what about the obligatory off-road water splash, eh!? But ironically, many adventurers end their trips shortly after waterborne recreation rather than following an accident or mechanical failure, and it’s not just a case of drowning…

As adventure bike riders we face many unique threats. Minor injuries can soon become debilitating or life threatening, especially as many of us travel alone in countries where we may not speak the language. Tropical ulcers and infected wounds are common in warmer areas – I even met one guy in Goa who had his leg amputated after he chose to ignore a small cut on his toe which had become infected. When riding through water, particularly in tropical climes, make sure vulnerable parts – like fingers – are well protected, no matter how hot or wet you are, because you never know what’s lurking in the water…

Dirty ponds and lakes are an obvious no-go area – even on the bike. Leaches can slime their way through the tiniest gaps (I told you about my testicle/ leech debacle in Vietnam, right?), and if contaminated with faeces, such bodies of water are likely to harbour microbes like cyclospora, cryptosporidium, and giardia. I’ve suffered infections courtesy of all the above (not always deliberately) and my worst case of diarrhoea lasted 12 weeks. If that isn’t enough, our ratty friends (which love water) can spread Weil’s disease or Leptospirosis in their urine, which tragically killed twice Olympic gold-medallist Andy Holmes last year and threatened to stop the Malaysian eco-challenge a few years before that when a number of competitors became seriously ill after making a river crossing.

My favourite water-borne nasties of all are probably the blood flukes. Blood flukes cause a level of global debilitation that is second only to malaria within the parasite world. And the chances are that you might never have heard of the disease that they cause: Schistosomiasis! An estimated two hundred million people in 70 countries are currently infected by blood flukes, and around three quarters of a million of these will die this year. The worm-like animal debilitates and kills in a multitude of ways. Kidney failure, cirrhosis of the liver, heart disease, lung infestations and even cancer can result from their unwelcome presence in your body. Even the cleanest-looking fresh water (including cases of un-chlorinated swimming pools in Rio de Janeiro in Brazil) can be home to the snails which carry the eggs of the worm, and when the tiny tadpole-like larvae hatch from the eggs the first thing they look for is human flesh to penetrate.

You don’t need to drink the water to catch this parasitic nightmare, and you won’t even feel them as they drill through your skin because they are so tiny. At first the only sign of infection is a slight rash, but long after the rash has disappeared the tiny flukes will be travelling along your blood system to your liver, where they mature before finding a suitable vein in which to make their home. Adult males, which are around three quarters of an inch long, attach themselves to the wall of your veins using two suckers and wait for a female to join them. Once a male fluke has found a mate it will hold her in a monogamous embrace and they begin having sex within your body – for up to 30 years! And if that isn’t scary enough, the female proves that she is impressively successful at reproduction by cranking out over 3,000 eggs inside you each day.

The eggs are the things that do the damage, because unlike hen’s eggs they are quite active, and have the ability to burrow through the walls of the blood vessel and across the body, to make their home in the intestines or bladder. Abnormal tissue masses develop around these eggs accompanied by huge inflammatory responses. Left untreated you’re likely to die after a few decades spent in total agony, but thankfully those of us lucky enough have a prompt diagnosis and fortunate enough to be able to afford the fiver or so it costs to get effective drugs are likely to make a full recovery. This little parasite is no joke and the risk of serious infection while travelling is very real. A few years ago several students at my local school contracted the disease by swimming across the equator in Lake Victoria, Uganda, and needed urgent treatment on their return to the UK.

Many tropical areas, notoriously Australia, have more than their share of dangerous marine wildlife including sharks, salt water crocs, the deadly blue-ringed octopus, pacific cone shell and box jellyfish whose sting really smarts – I know from experience! There’s nothing weirder than sitting at a holiday resort on a beautiful sandy beach in tropical temperatures and looking out on a totally deserted ocean without a swimmer in sight, but in Queensland Australia this is all too common. Approximately five and a half thousand people have been killed by jelly fish since 1954, the culprit often being the notorious ‘box’ jellyfish, but for me the worst jellyfish of all is the Irukandji. They are so tiny you probably wouldn’t see one in a bucket held in front of you. Their sting is pretty much painless, but the syndrome that follows a sting is an excruciating combination of headache, muscle, chest and abdominal pain, nausea and vomiting.

In severe cases it can lead to pulmonary edema (fluid on the lungs), high blood pressure, rapid heart rate and death. One of the more unusual side effects is feeling a sense of ‘impending doom’. Symptoms usually abate in four hours, but can last up to 30, and victims can take up to a week to fully recover. Worse still, because this jellyfish is so small, it has even been known for people on yachts or ferries to be stung on the face by Irukanjis when showered with sea spray; if you fancy a Daker-style water splash in North Queensland, I’d recommend visor down!

On to water splashes of an entirely different ilk – how would you like to end up with a four-inch barbed fish stuck up your penis (or more precisely, the urethra – women aren’t safe either) just because you decided to pee in the river? Of course the Candiru fish doesn’t live in any old river, it tends to hang out in the Amazon, but if you’re tempted to ride the highway from Manaus in Brazil to Caracas in Venezuela, then it’s not just the anaconda, cayman and piranha that you need to worry about. In the main those are relatively easy to see and avoid, and you also stand a good chance of fighting them off with a knife or brute strength, but if you end up with a candiru taking up residence in your bits it will become irreversibly stuck there thanks to a series of spikes around its gill covers. If you’re stuck in the middle of nowhere this leaves you with only one option– as long as you still have that knife handy. Extreme as this may sound, a ‘penisectomy’ was the only treatment available until recently, and an option that simply doesn’t exist for women. So when in South America think before you pee in the water!

After reading this, perhaps you’re thinking that chilling out on the beach is the thing to do, without even getting your toes wet. But many beaches are far from safe places to be. Sand flies, black flies, tsetse flies, mosquitoes and beach dogs are all attracted by water, and all carry diseases which can potentially kill (check out leishmaniasis, river blindness, sleeping sickness and rabies). Because sandy beaches and the sea are often treated like a communal toilet, the risk of becoming infected by germs contained in diluted sewage is very real; further suffering can be caused by hookworms, dog hookworms, and strongyloides worms – all found in poop and very good at penetrating exposed skin. Yuck!

Don’t be put off riding the beautiful beaches, oceans and lakes of the world; just follow these basic pointers…

Adventure motorcyclist Mike Leahy is a virologist and TV presenter who’s passionate about foreign travel. His TV shows include Bite Me for National Geographic, LabRats for BBC3, and Bodysnatchers for BBC1. Mike likes to experiment on his own body. By deliberately infecting himself with nasty diseases, being bitten by dangerous animals, and growing parasites in his insides he hopes his first hand experience will save other adventure motorcyclists from the same fate.