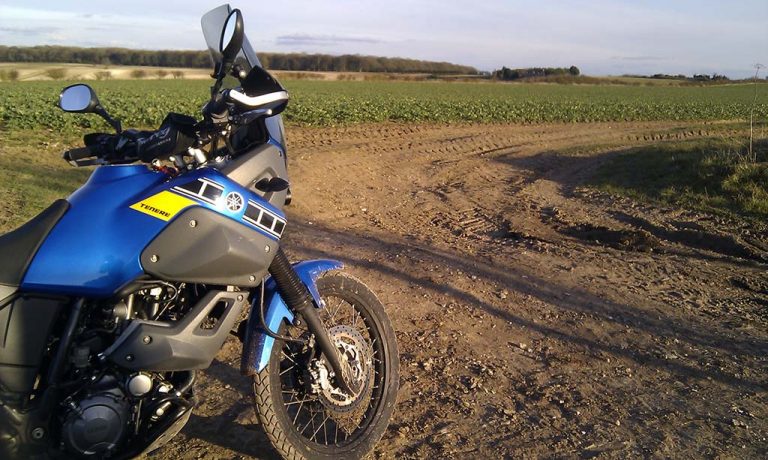 Having ridden the 2009 Tenere for 10,000 miles, I feel I have gotten to know the bike well enough, and having made some subtle modifications, it suits me even better now. The nice thing about the new Tenere is that Yamaha has supplied a competent, reliable, but somewhat basic bike. The owner can choose to live with it as is, but like a blank canvas it is crying out for the owner to create something of his own.

There aren’t too many options if you’re looking for a single-cylinder adventure bike, so the Tenere is well placed in the market. BMW has seen this and has just re-launched its 650 single, but KTM steadfastly refuses to build an adventure bike around its 690 engine. The 650 BMW is more a learner/road bike, so the XT660Z is more or less in a class of its own. It’s capable off-road, and can sit at 80mph all day long, either cruising into work or cruising down to Morocco.

Of course, comparing the Tenere to twins like the Transalp, BMW’s 800 GS or the big KTM Adventure bikes, let alone the new Triumph triple, isn’t relevant because a single-cylinder bike has a character and following all of its own. The styling is also very distinctive, making it stand out from other adventure clones. 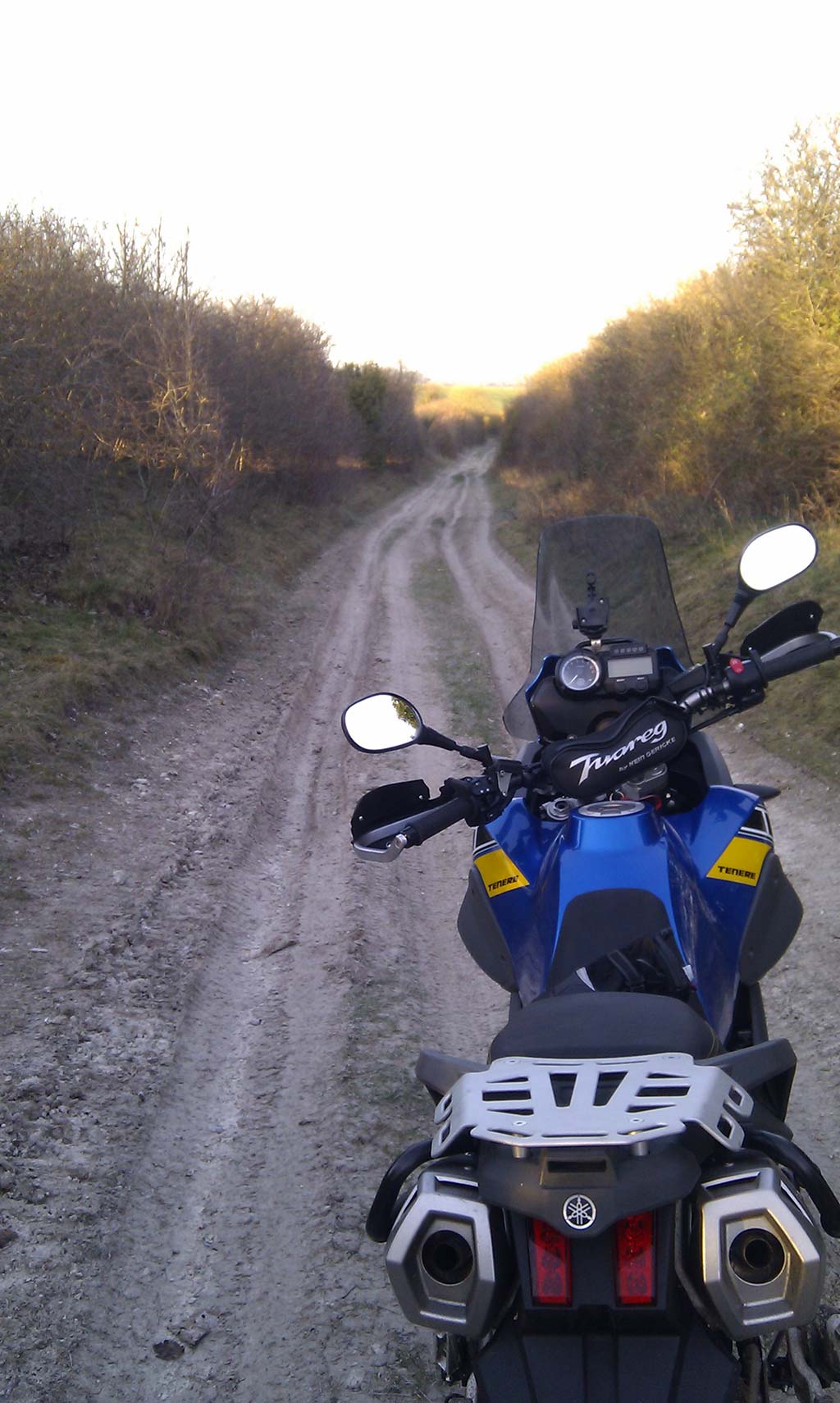 The engine does feel a little strangled in standard trim, but the general handling of the bike is good, a very composed ride without any drama. The best way to enjoy the ride is to short shift the gears and keep the engine spinning between 3k and 6k. Lower than that and it might struggle a bit in higher gears. There is no point in revving it too high, as it’s just not designed for it. It’ll pull 80mph in and out of work all day long and still return good mpg, even two-up.

The gearing is a little tall, so you pretty much always have to be in first when stopping or slowing down to a near standstill. Some owners fit a smaller front sprocket which is an instant fix but that throws out the speedo reading. The brakes are powerful enough but lack a bit of bite, but for off-road use that is good. 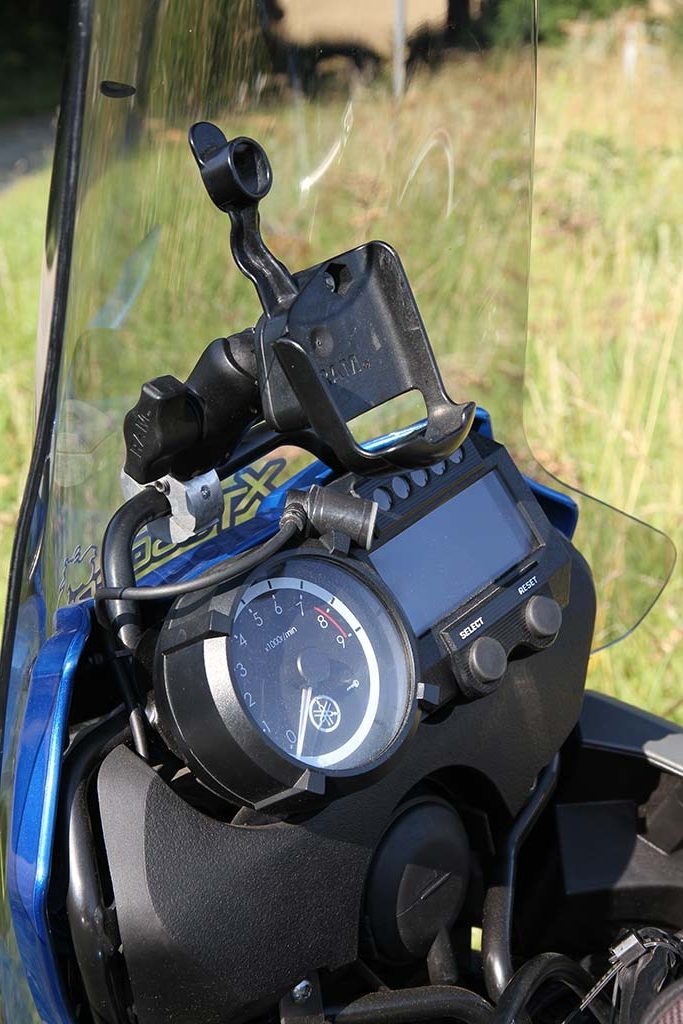 Personally I find the seat very comfy, but not everyone feels that way. Comfort of the pillion perch is lacking and while it does come fitted with grab handles, they are too far under the legs to be of any real use to the pillion. They are very handy when manoeuvring the bike through.

Depending on your height, wind blast can be an issue, but I found a taller screen and Hein Gericke bag on the bars reduces it sufficiently. The bag on the crossbar is to deflect wind coming up the front of the tank. The position of your legs can make a difference. If you sit splay legged then the air streaming around the front of the bike will hit you in the shins and rocket up into your body. Sit with your legs tucked in, with your toes on the pegs, and it makes an amazing difference.

It is a tall bike but it is easy enough to lower by changing the rear shock’s ‘dog bone arms’, so all is not lost if you’re on the short side. For me, I like the extra height as it helps the ground clearance when riding off road. 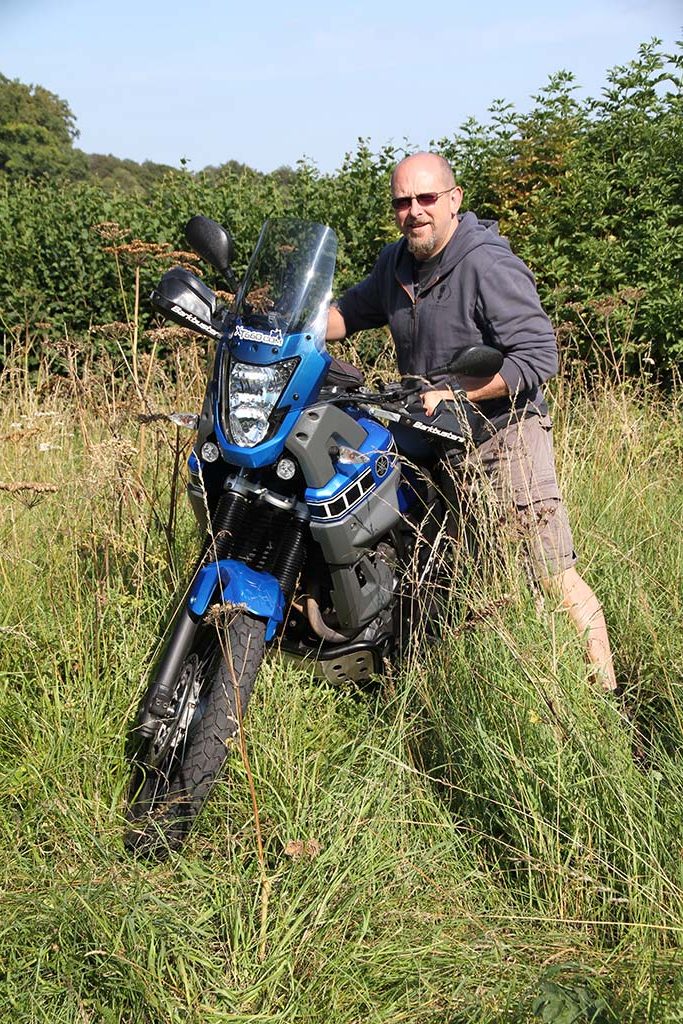 Better than I thought it would be in fact. It handles the slippery mud and clay of Wiltshire with ease; I had Swiss army tyres fitted for the ride. Once speeds creep up in the dry, the basic nonadjustable suspension found its limits on the rough going, but never got out of control. The bike has a lot of suspension travel to play with, so it doesn’t crash and bang through holes like I expected it to.

The lack of adjustable damping is fine for normal trail riding. When loaded, I felt the front end get a little loose over bump, but I hadn’t adjusted the rear pre-load to suit the extra weight. Next time I venture off road, either two-up or packed for a trip, I’ll jack up the rear preload to suit. The front end also has some pre-load adjustment.

The dip beam is very good, but the main beam is more than just bad, it’s next to useless. It throws the light too far forward, leaving the road in front of the bike in a black shadow. My first attempt to fix this was to upgrade the bulbs to extra bright units with glass tinted a light blue colour, so it casts a much cooler type of light. It definitely does make the bike stand out more in traffic, as well as lighting the road better, but a mechanic has since told me that these bulbs can constitute an MOT failure.

The main beam reflector design is the big problem. I found the solution in some 1500 Lumen 20W LED auxiliary lights from Hong Kong. To fit them I made up a little bracket out of some mild steel bought at B&Q. I cut, shaped, welded and painted it all in a day. I must say that these little things kick out some serious light. Being more of a floodlight-type beam they tend to light up everything, so you can see way ahead. I also upgraded the main beam to a 100w bulb, so now I don’t have any problems riding at night!

Fitting the lead for the satnav was easy enough as there is a switched power source in a convenient spot behind the main dash. It is actually used for the diagnostic tool at the dealer, but by using some thin connectors you can connect up to it without a problem.

The fuel gauge, which is overly pessimistic. It’ll cry wolf very early and start flashing the last bar when you’ve used about 18 litters of the 23-litre tank. I routinely ride it for 50 miles on ‘reserve’ but this will still only use 20-21 litres of fuel. Fuel range can be anything from 180-215 miles before ‘reserve’, depending on the modifications you’ve done. I have stretched mine to 315 miles on a few ride outs, including reserve, and filled it with 23 litres. 60mpg is the norm. 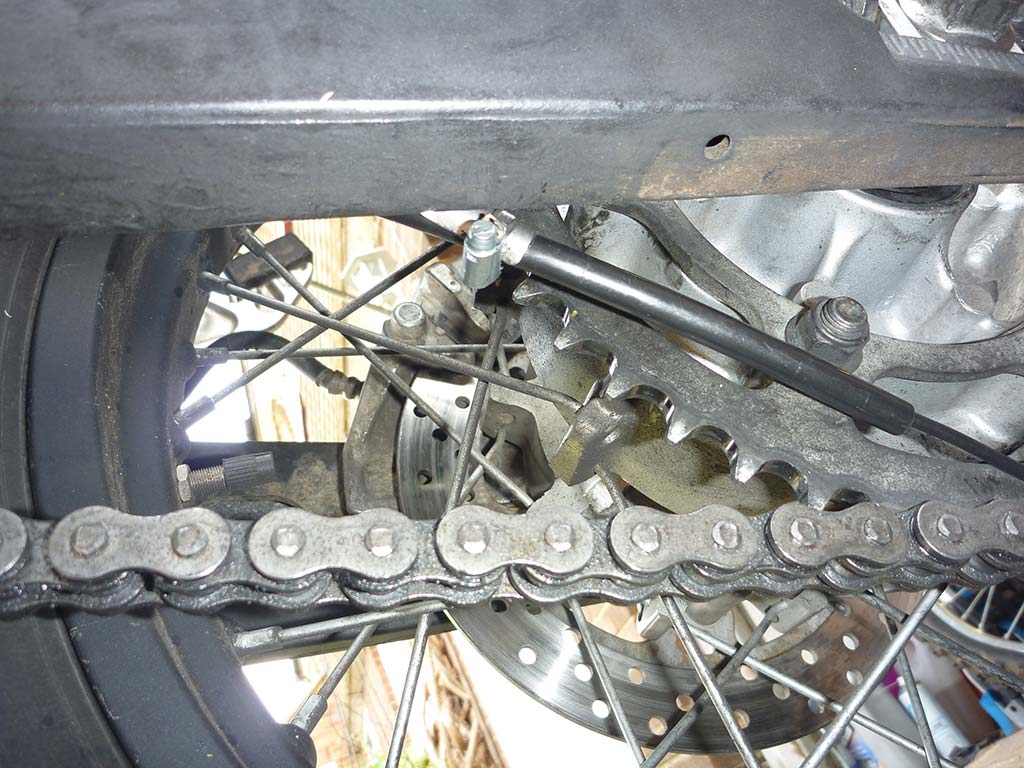 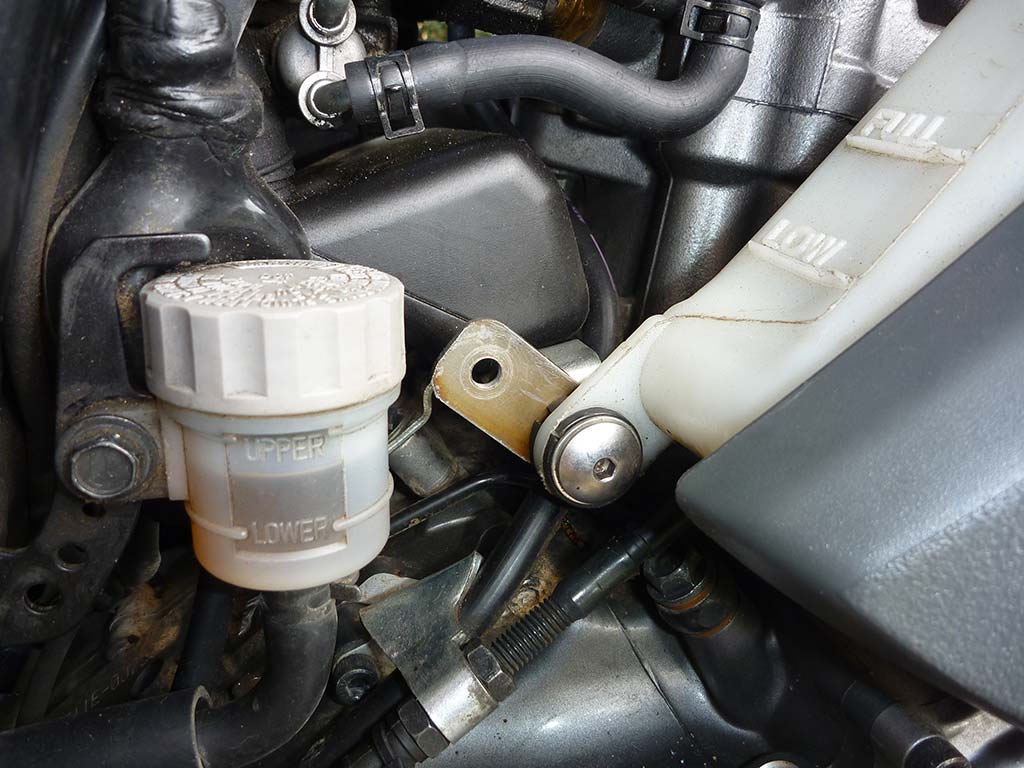 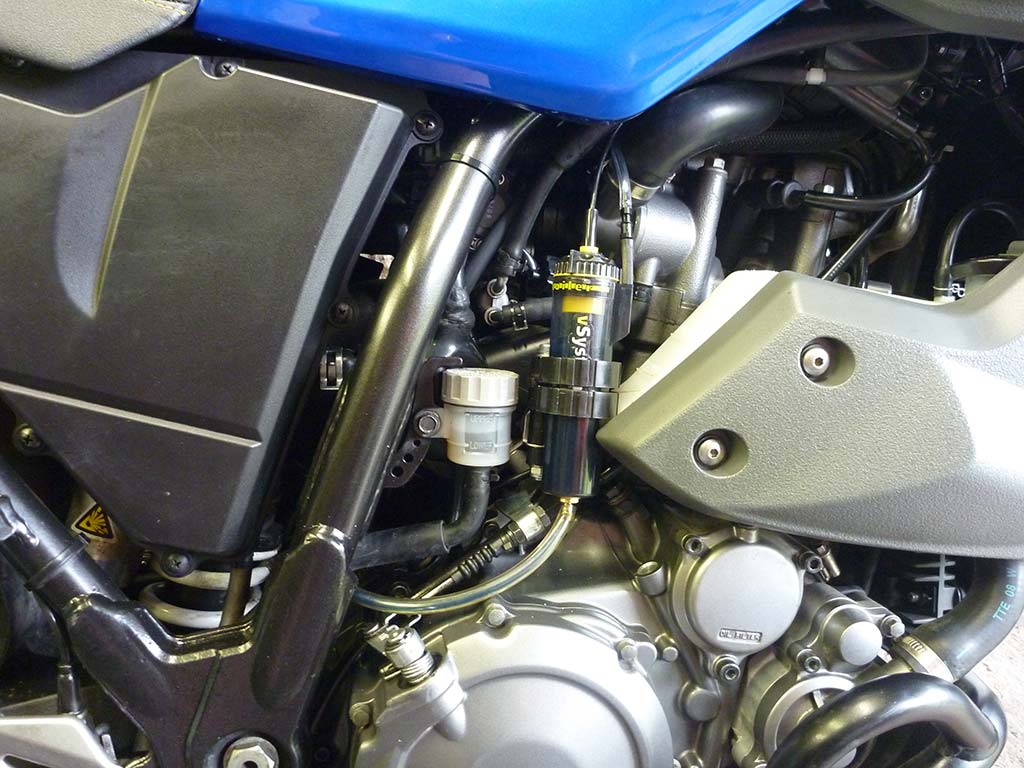 For me, it’s a perfect bike. The relaxed ridding style of the Tenere really suits me. It keeps me from getting carried away on the road and the fuel saved is a real help now that prices are so high. Having said that, if Yamaha brings out a parallel twin 900 with fully adjustable suspension, built with off-road use in mind, I’d be seriously tempted!

✔ Good road presence due to its height and size

✘ Some early models suffered from some regulator/rectifier problems

✘ Standard exhaust weighs an absolute ton, (but does look nice). There are loads of exhaust options out there, but if you use panniers then make sure the exhaust you choose will fit with the panniers in place

I opted for Barkbusters as they do a model-specific fitment for the Tenere and have the added protection of the aluminium bar. They do not use the original handle bar weights and the ones supplied are a lot lighter. This means that the vibes getting through to the hands do increase a fair amount, which was quite noticeable on the first ride I took. Silicon inside the bars and brass weights on the end are simple fixes.

Fits straight on with no issues. This is an auxiliary plug though, so normal ‘in-car’ plugs won’t fit. 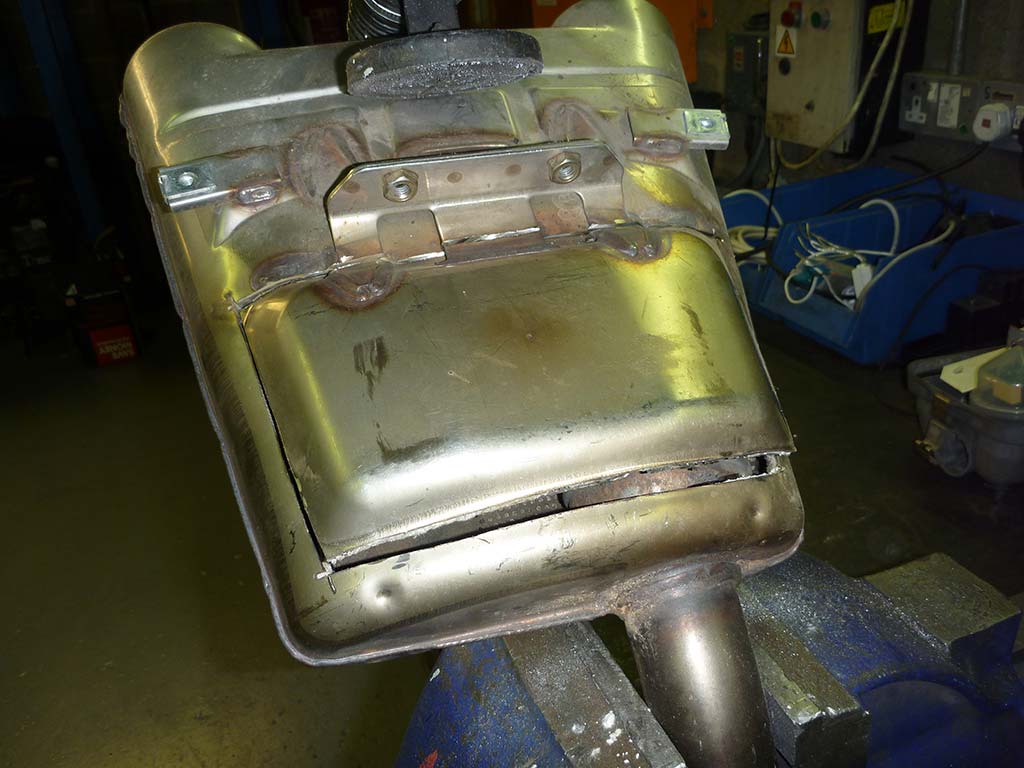 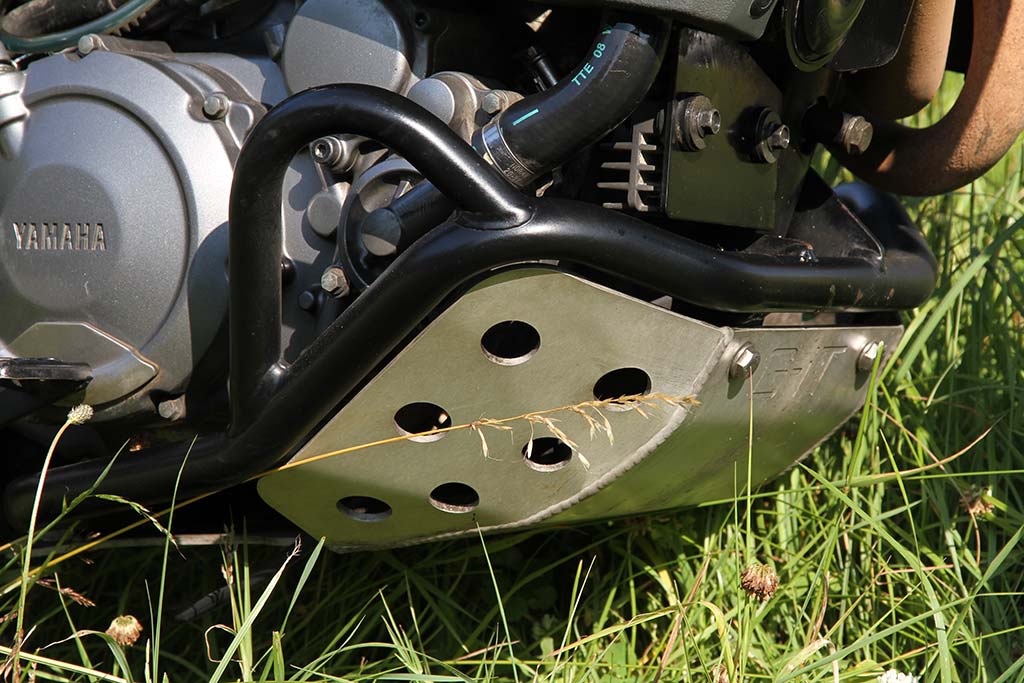 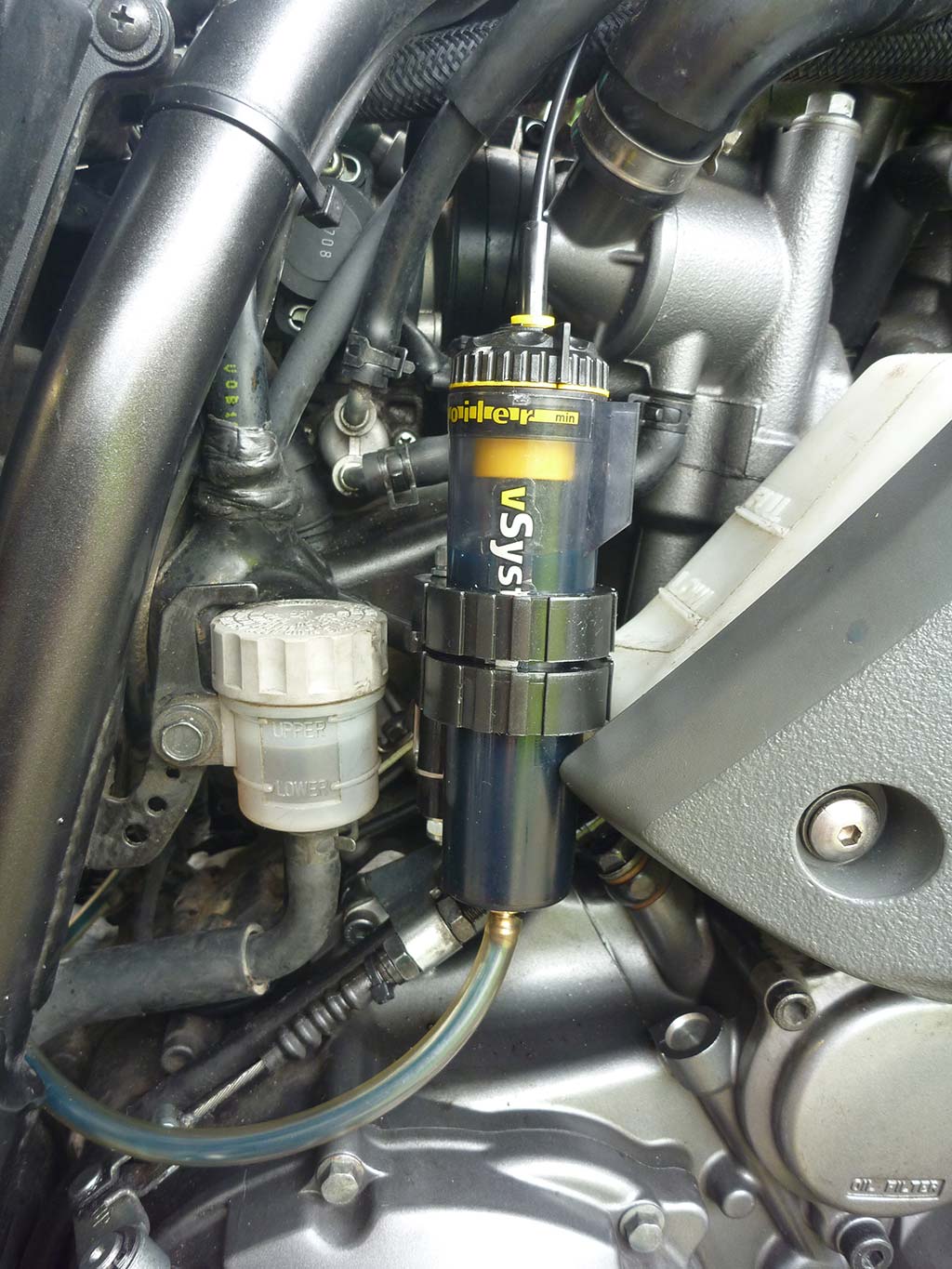 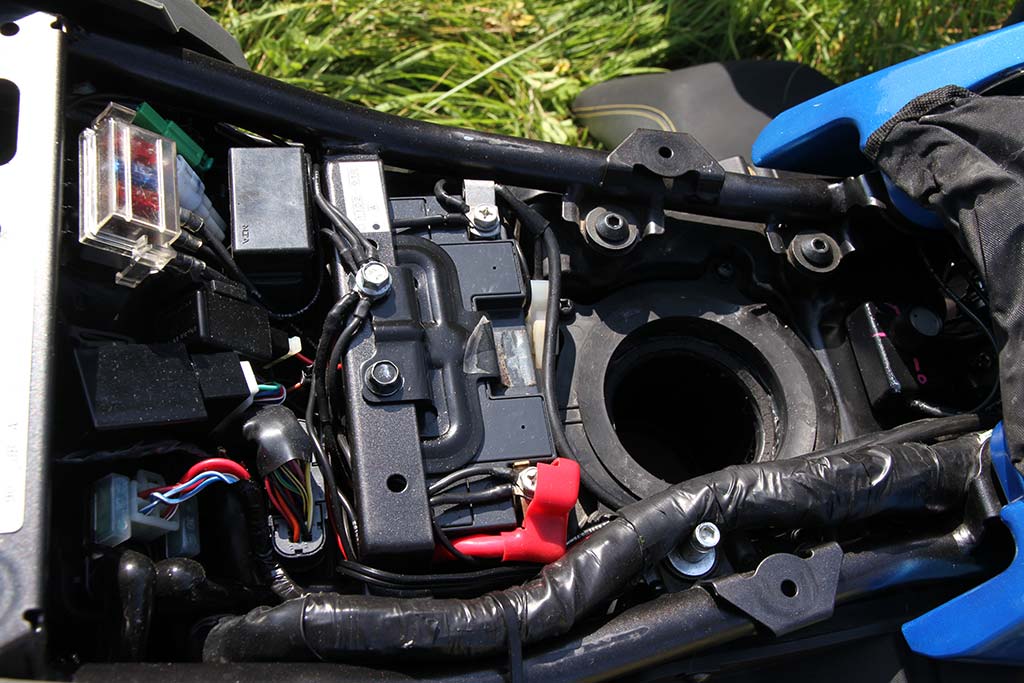 Does its job well on the dirt but also makes the stand slightly longer on the tar so sometimes you need to watch how you park, as the bike can be a little upright.

Well made and simple to fit; essential for rocky trails.

A £5 fuse box was fitted under the seat but the mounting tags needed moulding to fit around the rounded profile of the wheel arch. I fitted a slightly longer bolt to accommodate all the neutral terminals, with one wire going back to the battery to ensure 100 percent earthing at all times. The next step was to make it all switchable so I used a relay that picks its switching signal from the rear light feed, so the positive feed wire from the battery to the fuse box could then be routed through the switched contacts of the relay.

Getting the engine to breathe

As I mentioned before, the engine felt slightly strangled. To remedy this I did the following…

Fuelling: made a fuel mod according to design on www.xt660.com

The exhaust is an obvious one to tackle as it has a catalytic converter built into it. To save money I opted to cut out the ‘cat’ and then I used a 20mm holesaw cutter (welded to a long metal rod) to open up the first chamber which would allow gasses to escape directly into the outlet pipe; the seat doesn’t get hot now.

The next step is to remove the snorkel that sits above the air filter and at the same time fit a free-flow air filter and ‘fuel mod’. The fuel mod is simply a 3k adjustable potentiometer wired into the temperature sensor circuit to fool the engine management into thinking it is colder than it is, and it enriches the fuelling to suit. After removing the snorkel the air filter doesn’t fit too well, so you either have to buy a new cover or opt for the cheap fix of a waste pipe rubber gasket, cut down to do the same job! Filter-wise I decided on a Pipercross foam-type, partly because it is a lot cheaper than the others (K&N or DNA), but also because I can use the same cleaning/oiling products on it as I do on my enduro bike, due to the fact that it’s foam.

The results? Well it’s not a light switch moment to instant mass power increase, but it has definitely made the bike pull smoother lower down in the rev range and the engine is much more flexible below 3k. Cruising on the motorway, it picks up quicker when the throttle is tweaked to overtake a car. A surprising side effect is the fact that it has improved the fuel economy, which is a bonus!