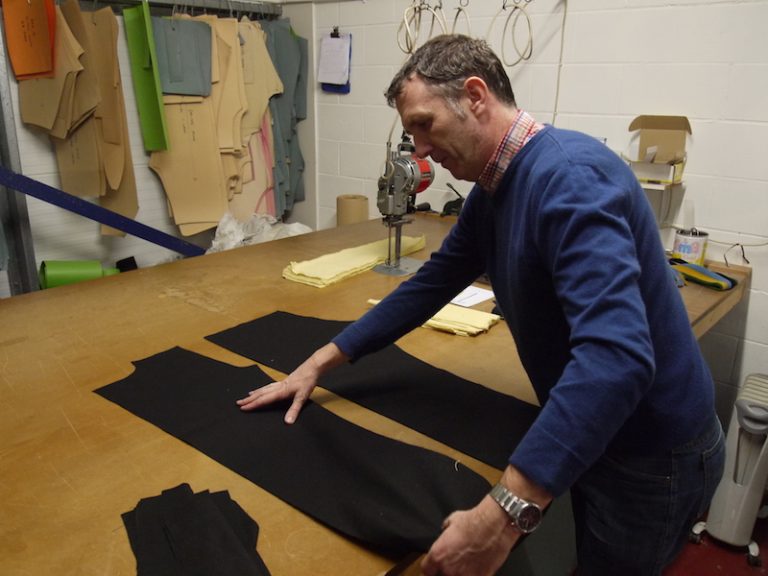 In 1998 Chris Easterford began manufacturing Hood Jeans in a small barn near Norwich. Nineteen years and one recession later, he is now the owner of one of the UK’s most well known motorcycle jean companies. Bryn Davies took a trip to Norfolk to find out more…

“Our background is making jeans,” says Chris as he hobbles around the work desk at the Hood Jeans Attleborough workshop, his leg in a cast after he ruptured his Achilles playing squash a few months ago. “It’s been 60 years since Mom and Dad started making jeans, so to mark the occasion we’ve brought out a normal jean for the first time in a long, long time”.

Manufacturing jeans has been in Chris’s blood since he was born. His mother and father met while working for Lee Cooper in the 50s before they went off to start their own jean company. “My Mom and Dad were working for Lee Cooper in the 50s, we (Hood) make a few thousand pairs of jeans a year and, well, they were making 50,000 a week! Back then, one in four pairs of jeans sold in the UK was a Lee Cooper, it was huge!

“So then my Dad left to start his own company in the 60s, MoTown Jeans. It was at the time when the government was handing out money to push production and manufacturing, there was a lot of investment so my dad went into the production side of things. And that’s what we’ve continued to do. We don’t know a lot about marketing and that sort of stuff, but we do know how to make a pair of jeans! 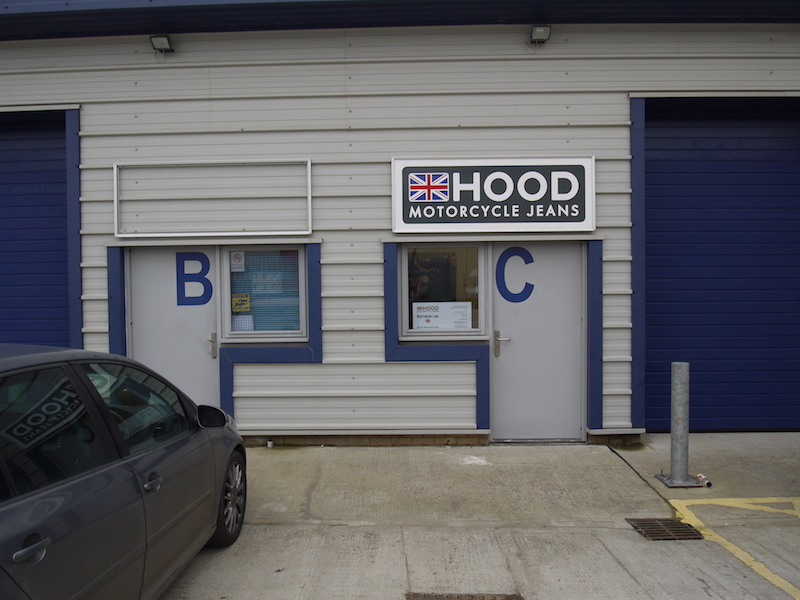 “It’s just us two here,” explains Chris, gesturing towards his wife Julie, who he met while they were both working for his father’s business. “But we’ve got two people that come in part-time to help us. My sister does the books, and we have another factory in the Midlands that’s run by a small family business, about our age as well. It’s not our factory, they make for other people, but not other motorcycle companies.

“The denims are done in Leicestershire because they have a choice of laundries to wash them in. They need to be stonewashed after finishing, and we haven’t got that around here. It’s easier for us to make the ones that aren’t being washed. When it comes to cutting the Kevlar I cut most of that here, even if the jeans are made in Leicestershire, it’s very expensive so I’d rather it here than laying around in someone else’s factory.

“Denim is about £5-6 a metre, whereas Kevlar can be about £40 for the same measurement. So if they don’t cut it right, if they have a bit of wastage while cutting then they can lose 10cm quite easily. With denim it’s not much of a bother, but if they lose 10cm on each cut of Kevlar then it gets quite expensive.” 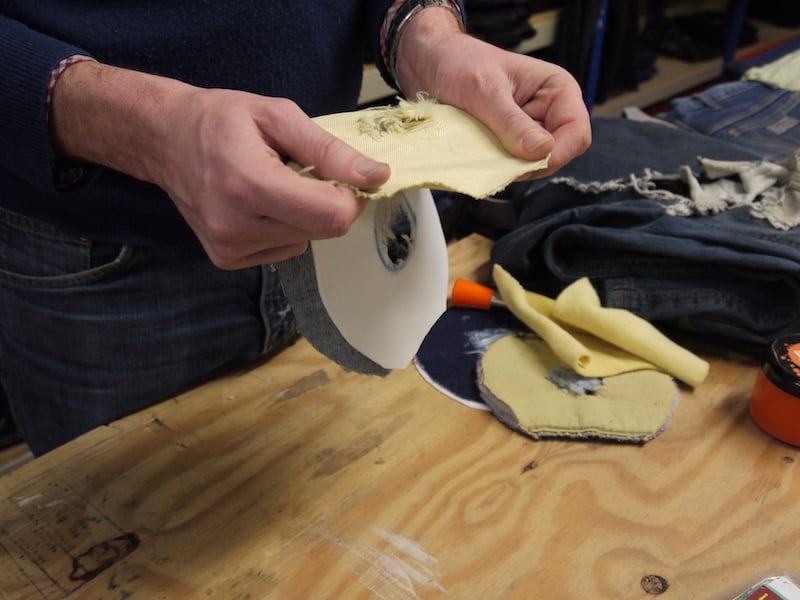 One of the main draws of Hood Jeans, aside from their overall quality, is that they’re still manufactured in the UK. It hasn’t always been easy for Chris to keep things here though, and at one point he was considering moving the business to the Far East.

“We thought five-six years ago that it would be really hard to make something in this country. All it takes is a couple of factories to close and even finding suppliers and mechanics has become harder. Even things like washers, there are only a handful of those left in the country, so we could see things dying out, it was on its last legs.

“It really looked like we weren’t going to be able to do it, so I was looking at different options. I spent some time in Bangkok looking at factories, getting people to work for us. We wanted to set something up, get the best people in, the best machinists, cherry-pick them from other companies if we could. Look after them, pay them good wages and insurance. I think that would have been alright, we would have made a good product still but it meant being over there a lot more.

“I know we’re very British and we sell it on that, and at the moment we do make everything in the UK, we were looking just in case. it was a shame. It’s come back a bit now though,” Chris tells me, the optimism clear to hear in his voice.

“Companies like M&S have been manufacturing more in the UK now, so there’s been a bit of investment back into it. We’ve pulled away from manufacturing in the Far East and I’m glad we did. I think we’ll carry on in the UK, there’s a lot more optimism, and I can’t foresee us having to make that decision now.”

When it comes to the products that Hood make Chris perhaps has a different point of view to many other manufacturers of motorcycle jeans. “The way we’ve been looking at things now is comfort,” he says while showing me the new range of Hood Jeans. 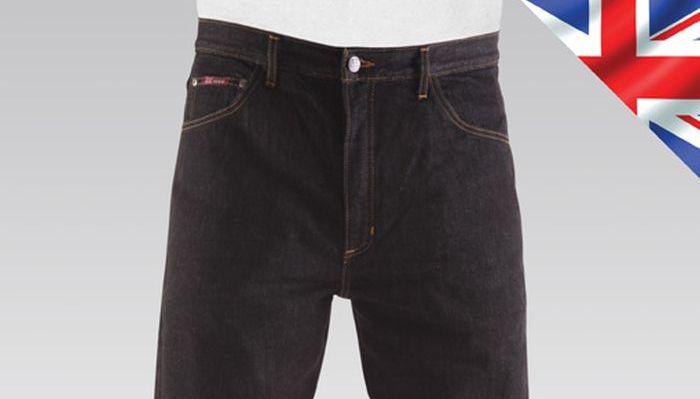 “Where other manufacturers are saying ‘we’re stronger than other people’ we’re going down the lines of thinking that we’re over strong in a way. Our new models drag for 800m, our old ones you can drag for 1,200m, we’ve sacrificed on the strength because we feel that we’ve got so much in the tank.”

But just because Chris isn’t focusing on getting into any ‘my jeans are stronger than yours’ battles, it doesn’t mean that he skimps out on protection, with all Hood Jeans coming fully-lined with an abrasion-resistant para-aramid. “I honestly think a full [abrasion resistant] lining is essential. It’s very hard to predict abrasion areas, whereas it’s pretty easy to predict impact areas. We’ve had people who have been dragged down the road by their ankle on a bike, it’s very hard to actually pinpoint where you’re going to get most abrasion. 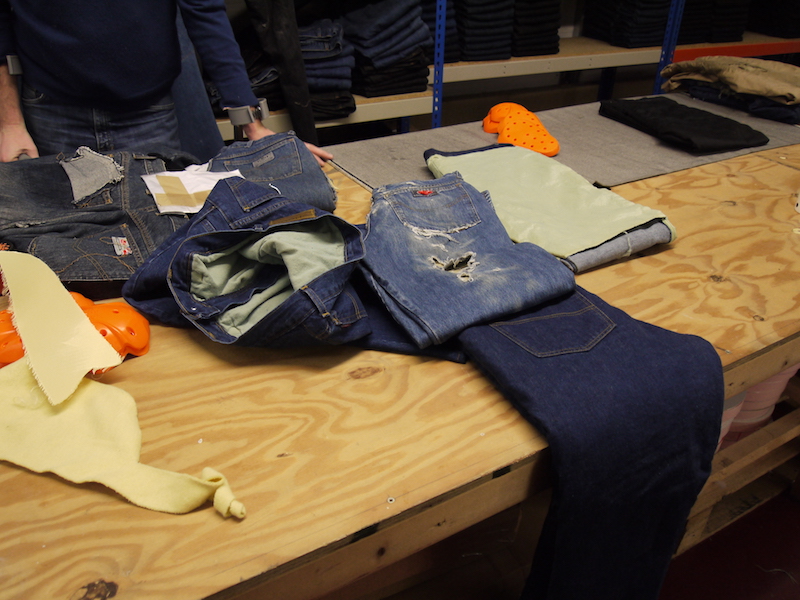 “You see on a lot of part-lined jeans that manufacturers will stick the Kevlar in where the armour is anyway, so really they’re just doubling up the same area. We’ve found that on part lines jeans the Kevlar gets pushed out of place anyway and the stitching along the panels weakens it and a lot of the time you see the most damage on the jean along where the panels are.’

‘I’ve only seen one or two good pairs of jeans that have failed in real-life situations, but they hadn’t failed at all. What had happened was that they’d twisted and the Kevlar panels weren’t where they were supposed to be, so the Kevlar hadn’t failed it had just moved out of place. On a quality pair, and it doesn’t matter what material you’re using, Para-aramid, Covec, Kevlar etc. If you can get the coverage then I honestly think that the jeans aren’t going to fail.

“If the jeans are comfortable enough, then I don’t think there’s any reason to use panels. It’s not that much more costly to fully line, at least it’s not for us because I have to pay someone in the UK to sew lots of panels, taking a fair bit of time and money in wages. So if I don’t use panels, but add more Kevlar and cut down on the amount of work involved, then that’s a big lump towards the cost. If you’re not making them in Europe then the wage side of things is done really cheap, so you can throw manpower at it and cut down on the Kevlar, saving a big lot of money.” 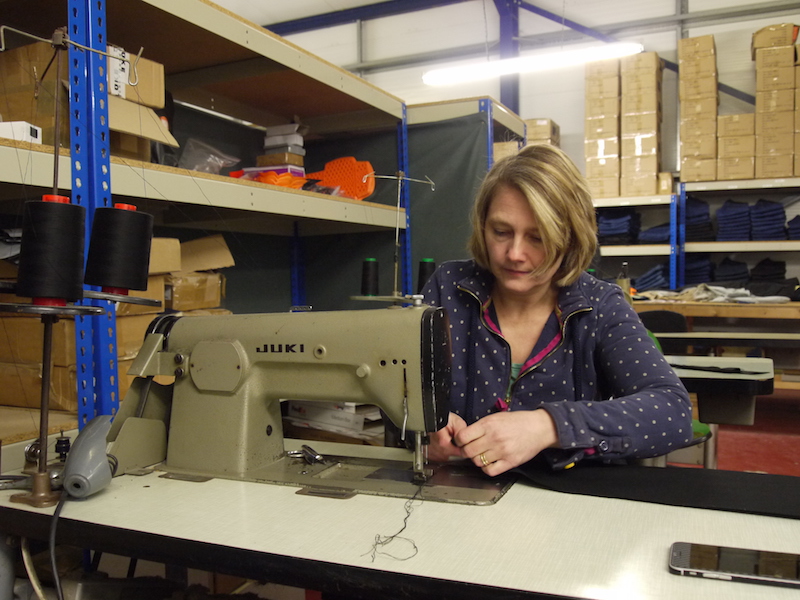 On Kevlar in Hood Jeans

“We call it Para-aramid, mainly because I don’t give DuPont 12.5% to call it Kevlar if I sold it to the public. It’s exactly the same as Kevlar, it’s even on the invoices as Kevlar, I can sell it to the trade as Kevlar, but I just can’t sell it to the general public as Kevlar, then I’d need a Kevlar license. I fought it for about six months, it cost me a few thousand pounds, and then I gave up because DuPont’s pockets were bigger.

“So we just then went on to tell people what Para-aramid is. If you look at Kevlar, underneath it’ll have ‘Para-aramid fibre’ so it’s exactly same.”

I had heard that different weather conditions could affect the performance of Kevlar, and so I asked Chris what his thoughts were on this. “Conditions can affect Kevlar, humid conditions in particular. I’ve actually spoken to DuPont about it and they agreed that it does lose a percentage of its performance, but it’s such a small percentage that it’s not worth quantifying.”

On the name Hood Jeans

“People used to come in all the time and say you’ve got it all wrong!” Chris told me, reminiscing about the birth of the brand. “You need to be called something like Fast Jeans! Something sexy! We were struggling a bit to come up with a name and at the time our son was very young and was watching Thunderbirds. We were designing a lot for some urban companies that were doing a lot of streetwear as well, and we thought ‘if all of this suddenly goes very wrong then Hood’s a little bit of a street name’, so if we were going to go through the pain of trademarks then we might as well leave it open so we can go back into streetwear! 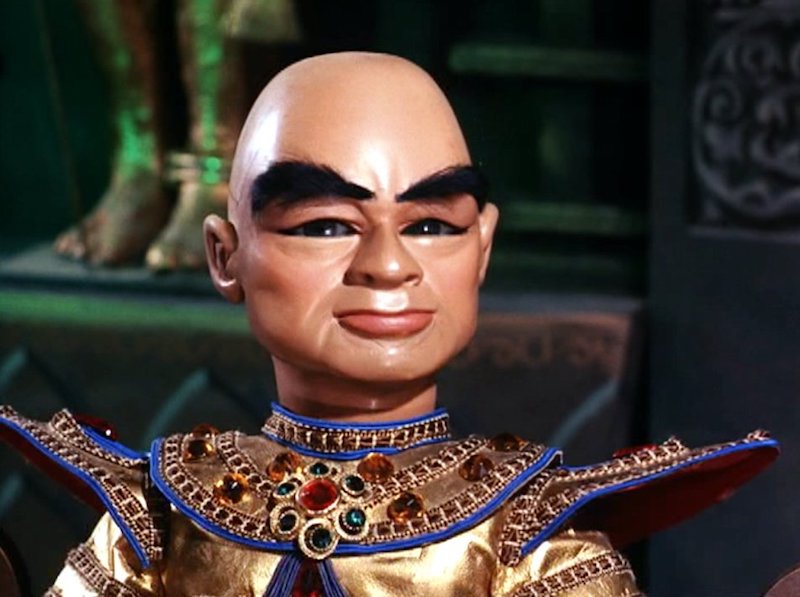 “Our other brand, Kyrano didn’t work quite as well because that sounded a bit Asian and we got a bit of stick that it wasn’t British enough. In Thunderbirds again, the Hood is Kyrano’s evil stepbrother so we came up with that brand so that we could test out some other Kevlars.”

It was particularly interesting to visit Chris and Julia as I’ve always had a bit of a soft spot for companies that have managed to keep their manufacturing in the UK despite the trend of shipping production over to the Far East. There’s genuine care about providing people with the best jeans they can and if you give them a ring you’ll no doubt get the same impression. Quality control is strict and the emphasis is on providing gear that customers will enjoy using. It’s been 60 years since the Easterford’s began making jeans, here’s to another 60.

For more information on Hood Jeans, and to see the company’s range, click here.