The best of North Yorkshire by motorcycle 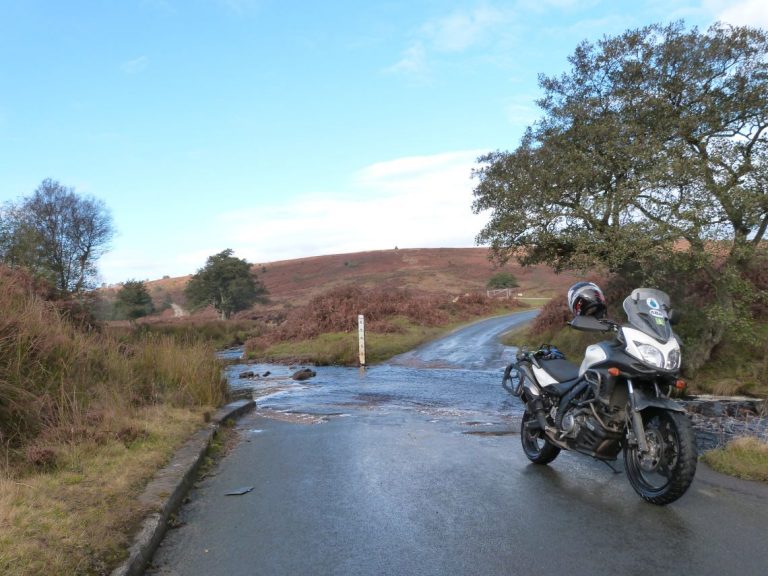 Adventure has been claimed to be many things; not a location, not a machine, but an attitude and a way of being in order to get that buzz. While you may think of a classic adventure being in a distant land making coffee by straining it through a well-used sock, there is so much that can be gained right here in your own back yard. Kids understand this line of thinking. This is why a child can have an ‘adventure’ with an empty box while we adults can struggle to gain the same ‘fix’ despite everything we have access to. Also, while you are dreaming of that epic RTW trip, we still have plenty of time to head off to places unseen right here in the UK. For this episode of UK Roads, we head for the moors of North Yorkshire… 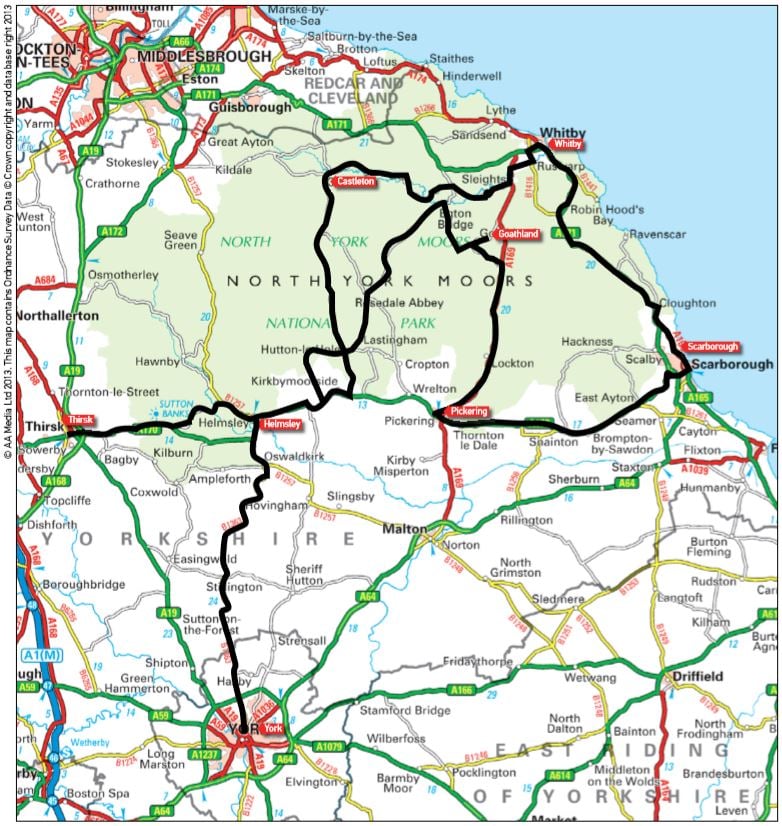 It would be remiss to head to North Yorkshire and miss out the main city. So we start our journey there. York is a walled city and the title is rather self-explanatory – it’s a city with a wall around it. Having been around for a long time and founded by the Romans there is of course much to see and do. The main feature of York would be York Minister, yet there is a wealth of museums and attractions to look around, such as the Jorvik Viking Museum on Coppergate, or the York Dungeons on Clifford Street.

The ride through York is what you would expect in a busy city, the traffic can be a real pain, with many side lanes that have been pushed into obscurity by main trunk routes with several lanes. It helped that I was not riding with the luggage attached.

It’s time to get out of the city and onto the open road after all that culture. I ride a Suzuki 650 V-Strom as my bike of choice due to how it sets my mind on the road. The bigger bikes can tend to have me looking for overtakes rather than enjoying the ‘show’ and smaller bikes can become a chore on the motorways. A good middleweight is what I go for. It has more than enough power to get a grin on the bends, yet gentle enough with the throttle to get you to relax and enjoy the ride.

The road I took to Helmsley went through Sutton-on-the-Forest, for I do love the B-roads – a well maintained dual-direction road rather than single track. Long fun sweeping bends and plenty of open farmland that allows you to let your eyes wander to the horizon without obstruction. You move into hedge-hugged sections that lend extra focus to your ride, and then swiftly back to open views again of the moorland beyond – glorious.

If you head off down the A170 toward Pickering then you will find a road called Gray Lane that will take you into the National Park and up towards Upper Esk Valley – home of some of the best views to be had in the area. The road to Castleton is dual road, but the tarmac is more distressed as (going to press) we head into autumn and so then grip – or lack of it – should be in your mind when you think about opening the throttle.

You will be lifted above the famous moors and offered a view that is drenched in deep browns and olive greens as far as you care to look. You can take this magnificent road all the way to the north of the park, but there is ample opportunity to ‘adventure’ on the single tracks that lead from the road, but into where? You be the one to find out and enjoy the solitude – just be aware that single tracks tend to have grass growing in the middle and mud patches from 4×4 farm vehicles, all adding to the focus you need in order to stay rubber side up as we move into winter.

Castleton is the main village in the Upper Esk Valley. Here you can find a pub offering grub, with there also a bank should you need funds on the move.

Take the village roads to the coast and it will pay dividends for your soul. The A171 will get you there quicker, but you miss out on the amazing little villages that nestle into the moors almost forgotten by time.

Now, you will take in the wonderful names from Danby heading off at your riding leisure past Glaisdale, Egton, Grosmont and Ruswarp, before you arrive at Whitby on the North Yorkshire coast. I find it far more fun than just getting to the place, we are out on the bike so we may as well make the most of it and enjoy the ride rather than just the destination.

That said, you can have your cake and eat it as Whitby is a classic seaside destination. I was very surprised at how much life was still in the place, with the streets full of day-trippers and tourists. It was also warming to see that the bike scene is still alive and well.

I must say that the ‘Mods’ on the colourful Vespa range looked like their clothes had defied time whilst their faces were another matter – a geriatric showing of a northern Quadrophenia, with the fight on the beach with the ‘Rockers’ having to wait until after the midday nap was concluded and the Voltarol had kicked in.

Scarborough – Stay off the A171! Did I say that already?

This is such a great route to play on, not to mention so many a lonesome single track towards the cliffs can be found if you just take the time to keep cutting towards the sea.

The ride down to the old fishing community of Robin Hood’s Bay is particularly worth the effort, with a place to park at the top before taking a walk down the steep cobbles to the old fishing village at the bottom. Ensure that you have plenty of tread on the tyres as some of the roads are not used very often and above all else carry spare SD cards for the camera. If you’re a budding David Bailey then you will take about a year to get down the lanes to end up in Scarborough as you are so spoilt for choice with atmospheric shots of the coast and your pride and joy.

Once in Scarborough I took the opportunity to indulge in some seafood – well, fish and chips – finding motorcycles are very welcome here with designated Motorcycle Parking Only down the main strip and up along the sea defence wall.

The seaside resort is watched over by the ruins high above on the cliff of the old twelfth-century castle. This is now run by English Heritage and if you do fancy the very steep walk then be prepared for the EH pitch to buy a membership.

The rest of Scarborough, especially along the seafront is alive with amusement arcades and cafes all the way down to the rather grand looking hotel (the Grand Hotel, funnily enough) that sits above the bridge. Inland there is an absolute abundance of bed and breakfast hotels and lodges. You can snap up a double room for around £40 per room per night. It was in Scarborough that I spent the night and I really did enjoy walking around the rather dated seafront. There is a lot of work going on as the local councils seem to be investing rather a lot in our ‘tourist attraction hot spots’. It’s fair to say that I loved the change of pace and atmosphere here. Whilst riding in say Asia holds the charm of the unknown adventure taking you to places you can’t pronounce, here on the coast of the UK I felt like I was more part of a biking tradition that carried its own charm as you nod and smile to other bikers wandering around swinging their crash helmet in a pride-filled gait. It’s certainly not a place to be overlooked in favour of more distant far off lands.

I took the A170 and wish I hadn’t, as it’s just a road that gets you to Pickering, well, you and everyone else coming out of Scarborough. There is a lattice network of B roads and single tracks that run back into the National Park and I seriously suggest you give it a go and perhaps even get lost for a while. Passing caravans and trapped angry Audi drivers always makes me feel like I’ve been robbed of some little gem of a country lane somewhere over the hedge.

One digit less, but a much more fun road due to the fact that we are heading back into the national park. There are plenty of long straights, and with the absence of heavy traffic, I was again smiling on the inside of my lid. It was a great day to be a biker.

That was until a stark blue sign caught my eye ‘Hole of Horcum, pleased drive carefully’. The ABS almost came on as I laughed out loud and got the camera out. Childish perhaps, but an absolute must as part of journalistic integrity to share the ride. It was here that my camera ate my SD card! This is why I advise early on to take spares – I was gutted, but still unable to stop laughing, I was riding through Horcum it would seem. As for Goathland, this is where they shot the TV show Heartbeat with Nick Berry, with the village geared up for the tourist buses that come this way. You can even have your photo taken in front of the Aidensfield shops.

Thirsk – Back on the single track fun stuff.

We come to the last section, but it doesn’t have to be for you, you can explore these roads for days and keep finding new things. Head north for Egton Bridge and then cut down for Rosedale Abbey then Hutton-le-Hole and you will soon find yourself back on the road for Helmsley. Ride on up the B1275 to be able to cut across towards Thirsk, but taking in Peak Scar Road for Felixkirk, the last section being a mixed bag of single tracks with sweet undulations and well looked after dual roads that allow for a little more play.

This route covered about 160 miles, but you can have as much fun as you like, let your front wheel be your guide and be sure to let that kid who had so much adventure with an empty box make a few direction choices. You won’t regret it. 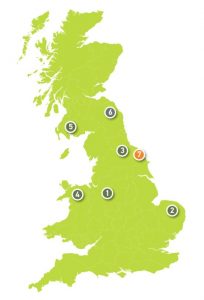 I work on a Garmin Zumo 660, and of course, satnavs are only good as guides – always read the signs! You will need to use the map function on your Zumo or of course you could buy an actual map… then again you could just keep following your front wheel wherever it may lead you!