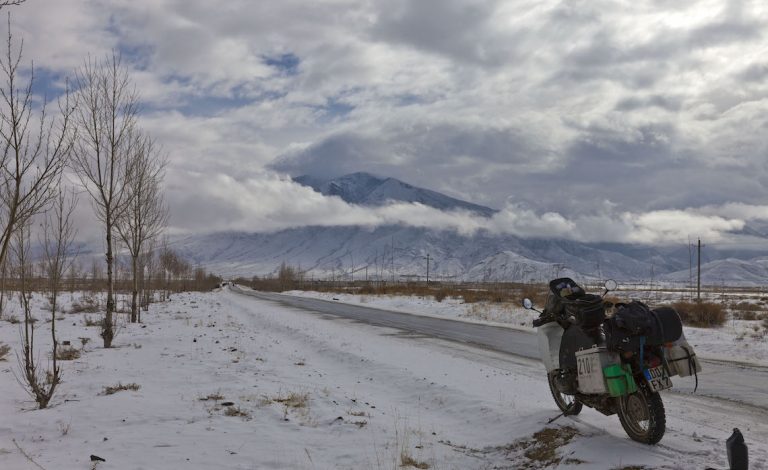 Despite the events of recent years, Syria was once a place many adventure motorcyclists entered and enjoyed. We hear from Daniel Rintz, a German traveller who passed through the country a few years before the troubles began…

Was it on your route?
Yes, absolutely. It was the only option for us too. To circumnavigate Syria we would have had to go through Iraq, which didn’t sound too enticing.

Why did you go?
Because it was on our route. And back then, there was no reason not to. The country had, compared to the neighbouring countries, a very neutral reputation.

Where you scared to go?
Not at all. Immediately before travelling through Syria, we came through Jordan, Egypt, Libya and Tunisia. All of those countries share the same language and I’m sure many more cultural reference points. In either one of those places, I sensed a certain tension without exactly knowing what it was caused by. It happened on more than one occasion that kids would pick up rocks and throw them at us while we were riding by. On the other hand I also frequently experienced a great deal of curiosity and openness towards me – the conspicuous foreigner on a heavily laden bike that I was. When we entered Syria though, I was utterly surprised.

Why were you surprised?
It was immediately clear that this country differs from its neighbours. It might have been just me, but there were no signs of tension. We didn’t realise the absence of certain characteristics until we were confronted with them again in Syria. For example, all of a sudden we witnessed students leisurely sitting in front of coffee shops enjoying themselves, barely anyone wearing a burka and a palpable liveliness of the city that wasn’t comprised of a crazily dense traffic situation for a change. And most importantly, for the entire stay in Syria, not a single person came up to me trying to sell me something on the street. Having spent so much time in Egypt right before, this was a huge difference. I felt immediately at ease. I guess this lifestyle was a bit more familiar, a bit closer to the background I was used to.

How long were you there for?
Only a few days unfortunately. My travel buddies plans to go back home were already made. I don’t remember what, but there was a certain deadline associated with that, so we were on a tight schedule.

What did you do whilst you were there?
Well, we mainly hung out with some friends we met there – Ayman and Gaith – who showed us around and introduced us to their friends. They gave us a sightseeing tour, played pool and played guitar on the hills by the city.

Where did you go in Syria?
Because we didn’t have a great deal of time, we went straight through. We entered from the South, went up to Damascus, Homs, Hamah and then exited into Turkey.

What did you learn?
I guess travelling through Syria was another reminder of how you should have a look yourself before you form an opinion about a place.

Did you feel safe there?
Yes, more than I did the previous months.

What were the people like?
Fantastic. Everyone we met was extremely friendly, open and worldly. For me, it’s always the people that make a place enjoyable or not.

How do you feel about what’s happened there?
I don’t understand it. I would never have expected it from what I have experienced. I feel it’s super sad and unnecessary. Actually I feel like that about every violent conflict in the world. But in Syria, I really don’t get it. It feels like they’ve exchanged all the people after I left.

Will you go back?
Not at the moment, but when the troubles settle, I would in a heartbeat.

The theme of Daniel’s trip was ‘2-wheels, 1-world, 0-money’. He set off with barely any money and being a computer engineer picked up work along the way, enough to fund his two-and a half year trip across the world. Along the way he filmed the documentary, Somewhere Else Tomorrow, due out soon. From the exerts we’ve seen it’s a must see. For more information visit www.open-explorers.com

The bike Daniel was riding through Syria on was a BMW R80G/S, better known as Marianne. It’s a 1980 model, with 220,000 plus kilometres, a 45-litre fuel tank by Acerbis, Ohlins rear suspension and Touratech aluminium panniers. The fairing is a modified unit from a 1990 Suzuki GSX. The tank mounted canisters are home made. The only serious breakdown in seventeen years of ownership was the drive shaft’s universal joint that gave up in Pakistan. The ‘210’ on the side stands for ‘2-wheels 1-world 0-money’, reflecting the approach Daniel took on his travels, earning money along the way to fund onward travel. The bike’s now in Daniel’s garage in Dresden, getting ready for part two of the trip starting in April 2013.

The troubles began in March 2011, in the city of Deraa, when locals took to the streets to protest after fifteen school children were arrested and reportedly tortured for writing anti-government graffiti on a wall. The protest was said to be peaceful, calling for the release of the children and for greater democracy. The Syrian Government is said to have acted in anger and opened fire on protesters, killing four people. The following day at the victims’ funeral another person was killed. People were angry, protests spread. People demanded the resignation of President Assad. He refused. The civil war, now in its third year, is between Government forces and the Free Syrian Army, a complication being the involvement of fighters with extremist views against western countries (‘Al Queda’ and others). In other words, you have genuine Syrian freedom fighters joined by people with their own Islamist agendas.

Two million refugees have left for Jordan, Lebanon, Turkey and Iraq, with it claimed that as many as 100,000 people have died in the fighting. Civilians have been killed by both sides. Matters are made complicated by Russia’s support of Syria. Russia has a naval installation in Syria. Iran also supports Syria. One theory is that the country is going through an inevitable rebalance of power following the drawing up of the nation’s borders by European colonial powers back in the twenties. Others view the civil war as an extension of the ‘Arab Spring’, which began more recently in Egypt and Libya. In the case of Syria, some fear that even if the rebel fighters are defeated, it is unclear if the government will ever be able to fully regain control of the country.