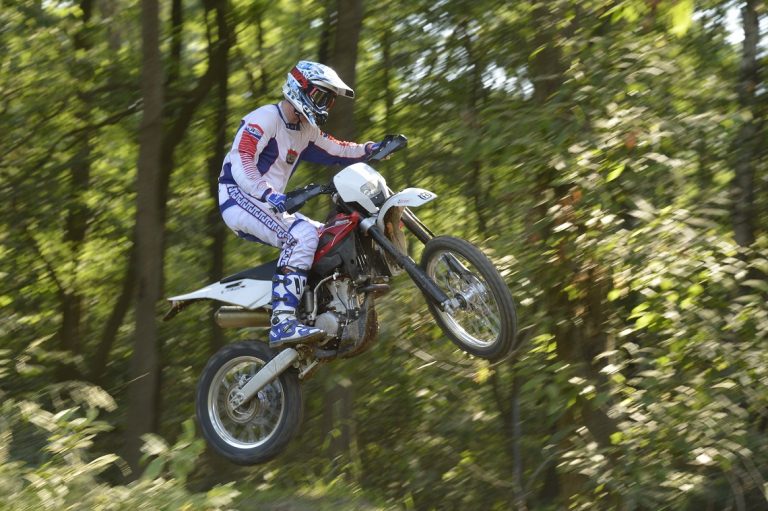 21-year-old Llewelyn Sullivan-Pavey has grown up living and breathing bikes with famed off-roading father Simon Pavey. Now Llewelyn is making a name for himself as an international rally rider and professional photographer. He’s recently returned from China, becoming the third European ever to take part in the Taklimakan Rally. We find out more…

What bikes do you ride and which is your favourite?

I have a Husqvarna CXC 250 for racing in endurance and a 2002 1150 GS Adventure. My favourite has got to be my Husqvarna, I love it. It’s awesome because it’s really easy to ride.

What was it like growing up around bikes, racing and rallies?

I don’t know any different I suppose. It has been exciting; there’s always something to go and watch or help with. It’s hectic, but fun. I don’t remember ever wanting to do anything other than ride bikes and play with cameras.

What was your first experience on two wheels?

I remember when I was about two and a half my dad used to ride with me holding onto the handlebars on the front of the bike. The first time I rode a bike by myself I was three; it was a Yamaha PW 50, a kid’s minibike. I could only ride in straight lines and fell around corners. I was too small to even pick the bike up!

Where’s your favourite place to ride these days?

In the slippery, muddy Welsh forest. I really enjoy it when it’s wet, horrible and rutted. 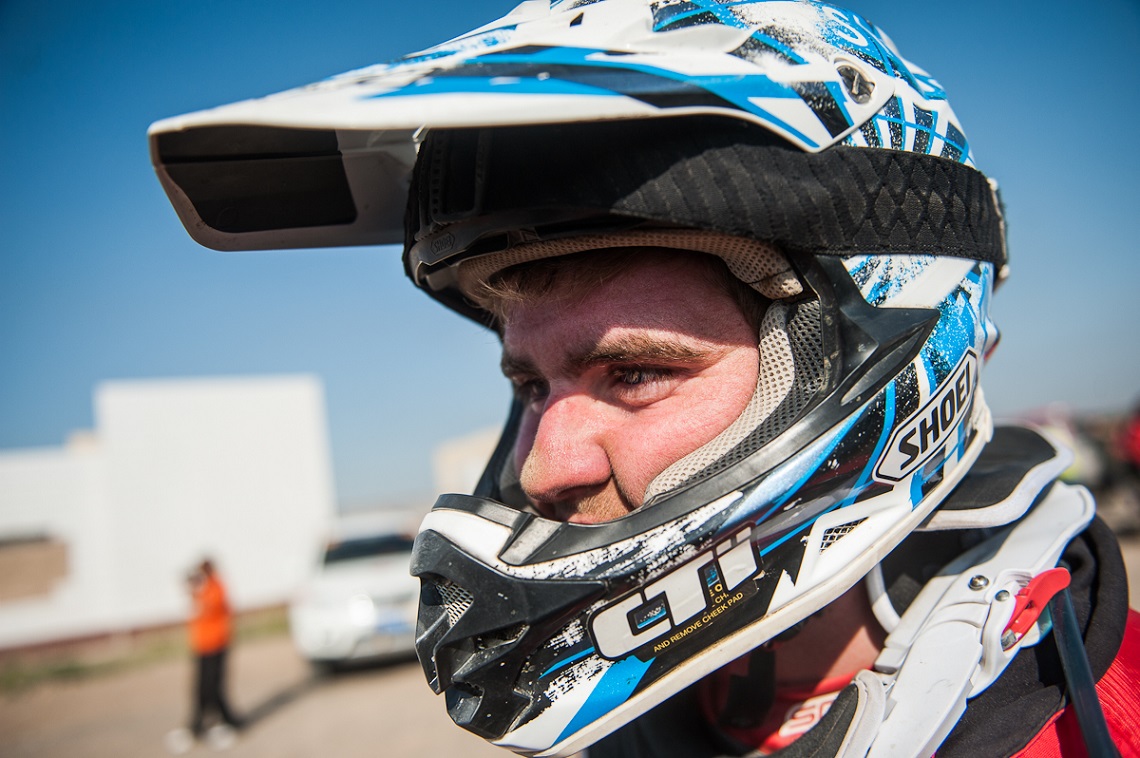 What’s the best thing about riding for you?

It doesn’t matter whether I’m trying to ride fast, or race, or just playing around off-road, it’s always fun.

Do you prefer competing or just riding for pleasure?

You’ve just completed the Taklimakan Rally in Xinjiang, China. Tell us about that

It was an interesting but strange experience. It’s the first time I’ve been to a proper international rally with a roadbook. I think it was quite different to the Dakar or anything we have in Europe or Africa because in China, motorsports are really new and they don’t have the same kind of experience. I came up against a lot of politics about letting me ride; the officials had this opinion that, because I was young, I wouldn’t be a safe rider.

So how did you get on?

I came second on the first day and the officials struggled to comprehend that someone could be young, fast and experienced because they don’t have that in China yet. All [local riders] are older and still the first generation of racers that they’ve ever had; it’s not like in Europe where we have more experienced people to learn from.

On the days that I rode, two of them I had really good results and two of them I had bike problems; I was second, third, eighth and 15th out of about 40 riders. The other three days they wouldn’t let me ride – a really frustrating experience. Culturally though, I learnt and saw a lot.

What was the best bit?

The second-to-last day of riding was awesome. It was all in sand dunes around a town called Turpan. Bigger sand dunes than I’ve ever seen before – 3 or 400ft high. It was a really beautiful place, the kind of place people never go to, in the middle of nowhere.

I ride fast, just to try and stay on top of the sand, and try to pick a new line. Don’t go off the edge of a sand dune fast – it won’t end well!

You’ve got your sights set on the 2014 Dakar – how are you preparing for that race?

I’m going to try and do one rally between now and when the entries open, and I’ll try and ride the British Enduro Championship again next year. I want to be as fit as I can be; last week I entered a marathon for the end of April 2013. I hate running, but I decided to do something that would be a challenge and improve my fitness, too. 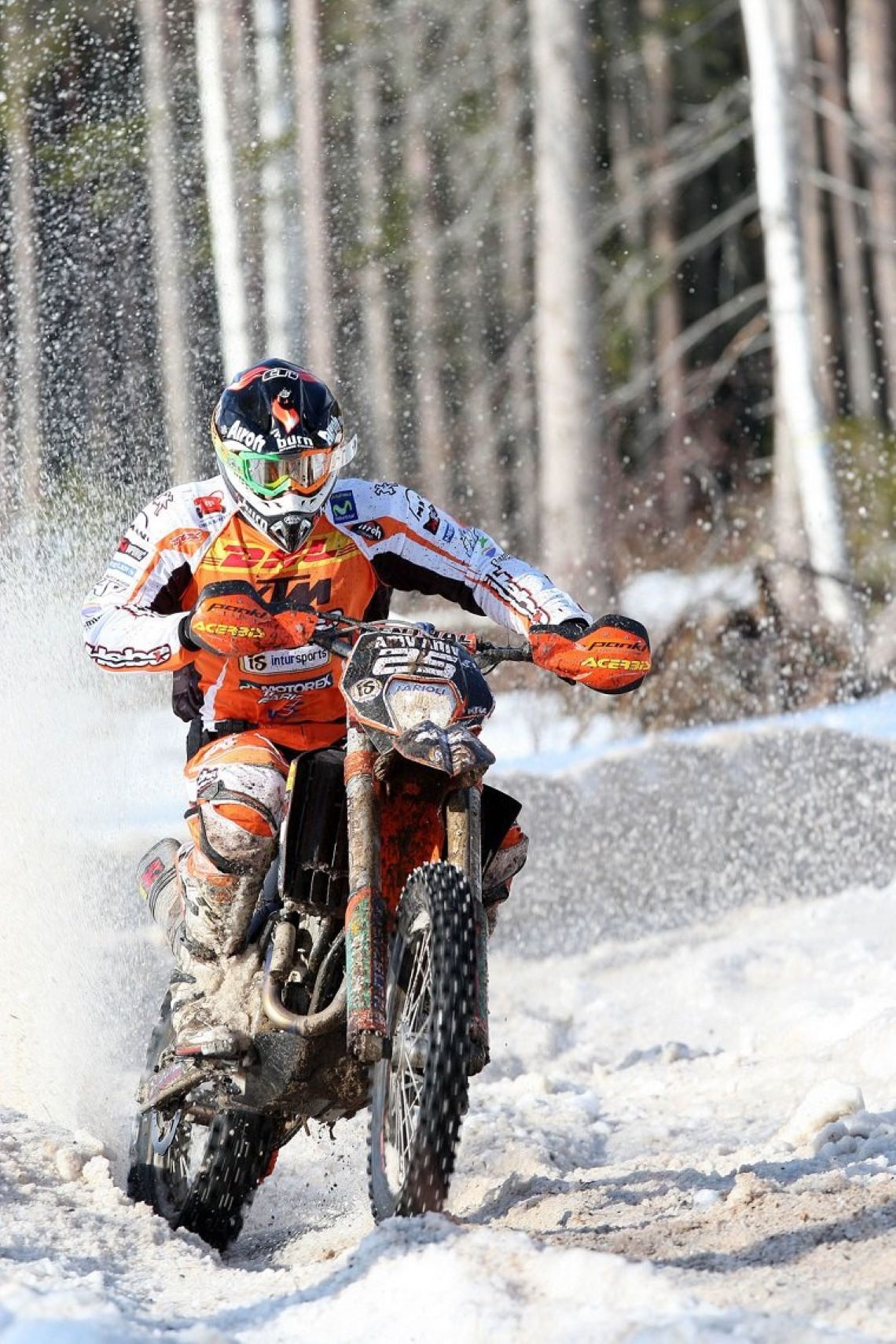 What do you think is your biggest strength?

I think I’m quite a safe rider. I don’t have many crashes and I ride within my abilities. I like to think I’m quite tough in the head. I think that comes from my old man.

And what’s your riding weakness?

When it comes to rally racing I could do with knowing how to work on a bike a bit better, and I suffer in the heat.

That was cool. I did two years working at the World Enduro Championship with him. It was awesome because he is a great photographer; he’s consistent and for every photo, he knows exactly what he is going to shoot. He doesn’t make mistakes; it was good for me to learn from that.

At first, he would position me and tell me to take a certain kind of photo, and he would only let me use a wide-angle lens until I got the hang of how fast professional racers ride. Then he let me find my own style.

What are your top five tips to help ABRs get better photos on the road?

1. You have to get the basics right: if it’s out of focus, ditch it.
2. When composing a photo, always look in front and behind the subject. It’s no good if there’s a post coming out of their head.
3. Use what you have available. Think about the composition in the background, maybe some trees to give some depth and make people think about the picture.
4. Understand shutter speed and aperture and how they affect your photograph; it’s not complicated to learn. Even if for a little while you end up taking bad photographs, you can see why they’re poor by checking the camera settings. When you’re travelling around the world, you can easily miss out on getting good photos in fantastic situations when the light and the colour is really good if you just leave the camera on auto.
5. Take your camera off the clever focus mode too, where it tries to decide for you what to focus on. Put the focus on the centre square, so if the subject is someone’s face, you can focus in on them and compose the shot afterwards.

What camera do you use?

What other essential bits of camera kit are there to consider?

I’m always looking for good lenses, I think that’s most important. I spend a lot of time with a borrowed 300mm 2.8 prime lens.

What advice do you have for ABRs wanting to get their photography noticed?

Firstly, get the photos right and take them with good camera kit. Make sure that they’re always in focus and that you have good colour on them.

Go to off-road races and take photos; no one is going to stop you. Then send them out to magazines and explain who you are and what you’re doing, and eventually, hopefully, someone will listen.

That’s a hard one but probably the beach.

Dead or alive, three people you’d like to have a beer with?

Mouse McCoy, a stuntman from America. He was a really fast, amateur motocross racer and part of a film documentary called Dust to Glory, which is based on a 1,000-mile race in Baja, Mexico. He rode it on his own and almost came third – a bit of a legend and an inspiration. Mikey Neil, a dirt bike filmmaker and Bruce Brown, the director of the bike film On Any Sunday.

See Llewelyn’s work at www.thatcamerakid.com and read a full report of his time in China at www.simonpavey.com.