The Rise of Adventure Bikes 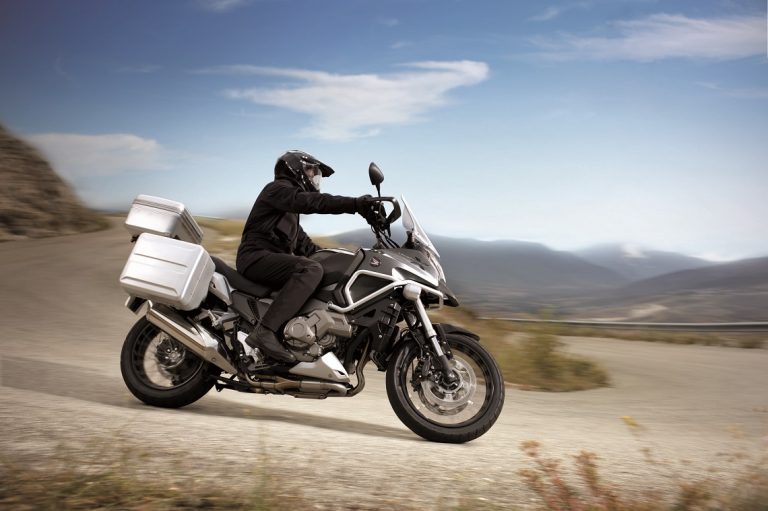 THE RISE OF ADVENTURE BIKES

Adventure bikes are now the biggest-selling sector of the motorcycle industry, but ask a group of bikers ‘what’s an adventure bike?’ and it won’t be long before the gloves come off and gruesome hand-to-hand combat begins. So, what the hell is an ‘adventure bike’ and how come they’re so popular?

The term ‘adventure bike’, or even ‘adventure bike rider’ for that matter, has come to the fore over the past decade on the back of a turbo boost provided by a couple of guys named Ewan and Charley. What the Long Way Round and Long Way Down achieved more than anything was to propel motorcycling into the lives of the general public by way of mainstream TV and enthuse a new generation to travel more on two wheels.

The appeal was across the board; middle-aged females, teenagers, non-biking males et al became engaged in the travels of a Hollywood celeb and his previously obscure buddy, living out what is essentially everyone’s dream.

That is, they put on hold the drudgery (if such a word could apply to the lives of Ewan and Charley) of day-to-day life and went outside of their personal comfort zones in search of adventure, and they just so happened to do that by riding a motorcycle around the world.

I’ve no doubt that the series would have been as popular if they’d circumnavigated the globe by car, or pushbike, or even on roller-skates. But the fact remains that they travelled by motorcycle, or more specifically, BMW GS Adventure bikes, and in the process began a movement that has gathered pace and inspired enough followers to make ‘adventure bikes’ the main focus of the motorcycling industry. 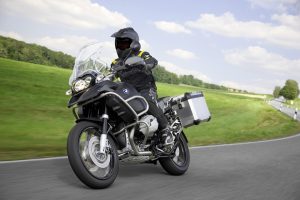 But let’s not confuse the term ‘adventure bike’ with the pastime of travelling by motorcycle, which has been with us since Gottlieb Daimler had the bright idea of combining an internal combustion engine with a couple of wheels and a frame.

There’s no doubt that you can have an adventure on any motorcycle, but not every motorcycle is now what we would commonly describe as an ‘adventure bike’.

By way of an example, there’s nothing to stop you from travelling around the world on a Honda Fireblade, which by anyone’s definition is a sports bike, and not an adventure bike. Modern-day adventure bikes follow a set format and style much in the same way as sports bikes, supermotos, cruisers or trials bikes do.

Essentially they come with an upright riding stance; the design offers the promise (if not the reality) of some off-road ability, and they tend to be tall in the saddle. Those features are the starting point from where they can differ extensively.

Adventure bikes, rather than being a niche side-line, are now mainstream and travelling by motorcycle has, arguably, become more popular with their rise to prominence. But the increase in adventure bike sales cannot solely be attributed to Obi-Wan Kenobi and his mate.

Adventure bikes are, after all, comfortable in extended use and far more practical for day-to-day riding than sports bikes. They offer a pillion a high level of comfort and they carry them with ease. They’re also, and this is the key, far better suited to the ageing demographics of the motorcycle rider, including the old fogy writing this.

As I’ve a habit of saying; ’I’ve done my time on sports bikes and moved on, permanently.’ And as for what constitutes an adventure, I often ask myself: was it the time when I set off to Morocco in the 1970s on a Norton Commando or rode across thousands of miles of African desert at breakneck speed on dirt bikes, or maybe it was the time I climbed the Eiger or forged a new route in the Himalaya, or made the first descent of a previously unchartered Wadi in the mountains of Oman? Yes, they were all adventures of a sort, but then in my mind, so is the ride down to Wales I’m going to do just after I finish typing this feature.

Cream of the adventure crop

2012 was a big year for adventure bikes during which they became the best-selling genre in the motorcycle industry. Alun Davies looks back and recalls his highlights from the past 12 months 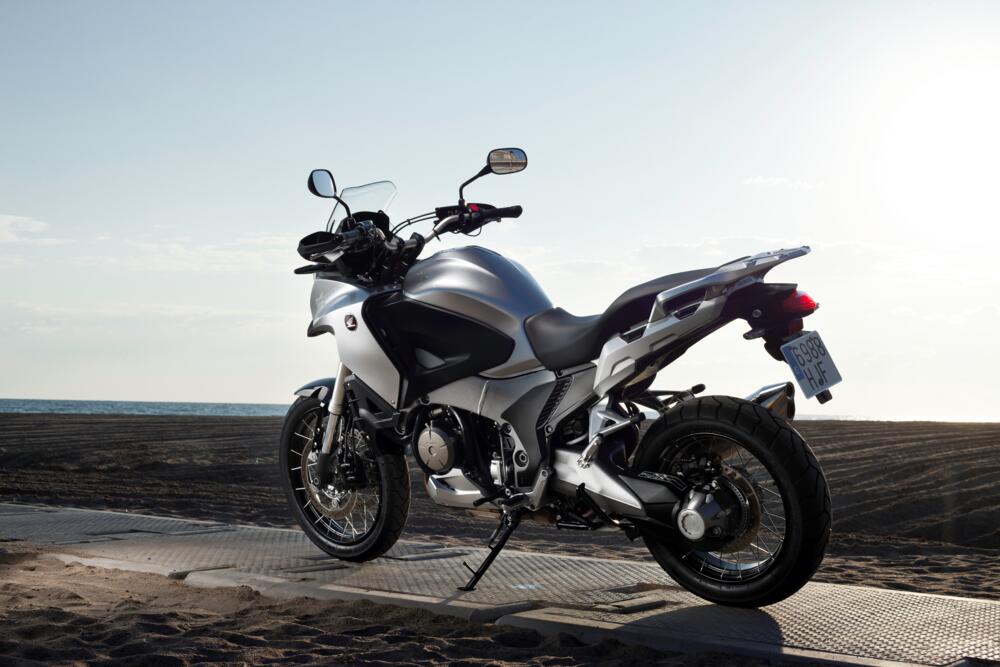 2012 started with a hint of a suntan after being invited by Honda to travel to sunny Spain for the press launch of the all-new Crosstourer. The order of the test day was to spend half of it on the standard manual version and the remainder on the innovative dual-clutch model. As things panned out, after breakfast, I was presented with the keys for the automatic dual-clutch Crosstourer, which lacked a clutch-leaver or foot-operated gear change, and instantly went into a sulk.

I’ve been biking for 35 years and I like clutches and gear levers, or at least I thought I did. Within five minutes’ riding, rather than throwing a temper tantrum and demanding I be flown home immediately, I was convinced that the Honda dual-clutch automatic gear-change system was the future of motorcycling. The dual-clutch technology means that you have a bike that can be ridden in automatic, semi-automatic or manual mode, where you change gear by pressing a paddle on the handlebars, and you can let the bike take care of all changes or a mix of both.

In full-auto mode, you also get a sports setting, which holds onto the revs for longer and makes the most out of the stonking V4 1200cc engine. A little research on the technology led to the surprising discovery that the first development of a dual-clutch transmission started in the 1980s just a stone’s throw from the ABR office under the guidance of local engineer Harry Webster, who at the time worked for Leamington Spa-based Automotive Products with a prototype being housed in a Ford Fiesta. 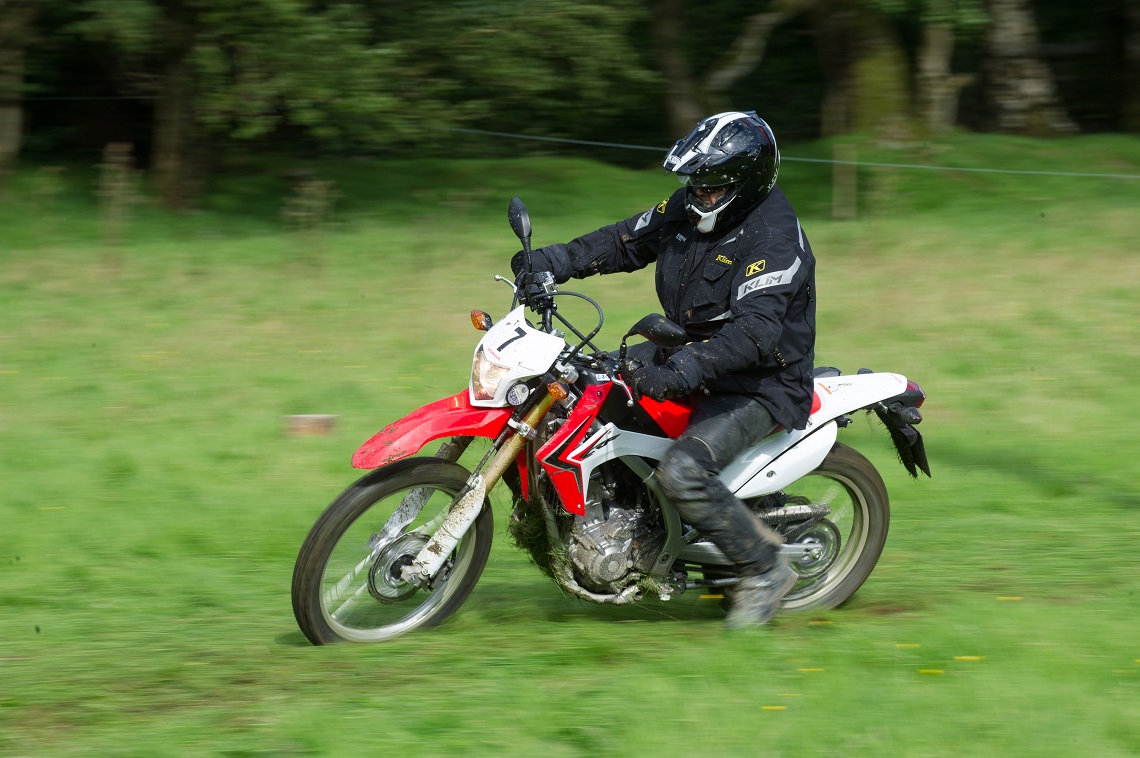 Most smiles per mile

There’s a time and place where nothing beats having a 1000cc under your butt; effortless high-speed trans-European travel and nipping down to Tescos immediately spring to mind. At the other end of the performance scale there are situations where a lightweight 250cc is all you need to bring a smile to your face and one such occasion was a grey skies day up in North Wales during the summer (what summer?) of 2012.

The Honda CRF 250 L is such a blast from the past, I considered having a mullet, buying a tank top and investing in a boxset of Starsky and Hutch to complete the 1970’s feel-good factor that flowed through the handlebars. I’d forgotten how much fun you can have on a simple 250cc trail bike both on the road and up in the hills. Crouched over the bars grinding out that extra 1mph, praying for a safe exit as I threw the machine into wet, gravel-and mud-strewn corners and topping it all off with a thrash round the forestry trails and single-track quagmires of Snowdonia.

You just can’t have this much fun on a 1000cc without saying ‘au revoir’ your licence or demolishing the bike on the off-road trails. Back at the ranch the assembled journalists on the press launch couldn’t quite work out who the hell would buy a 250cc traile in this day and age. Well, I could; that’ll be me.

The CRF 250 L is the perfect second bike for any rider dreaming of gentle Sunday green lane outings with the lads. And it appears I’m not the only one who thought that. Honda has sold out of its first UK shipment. 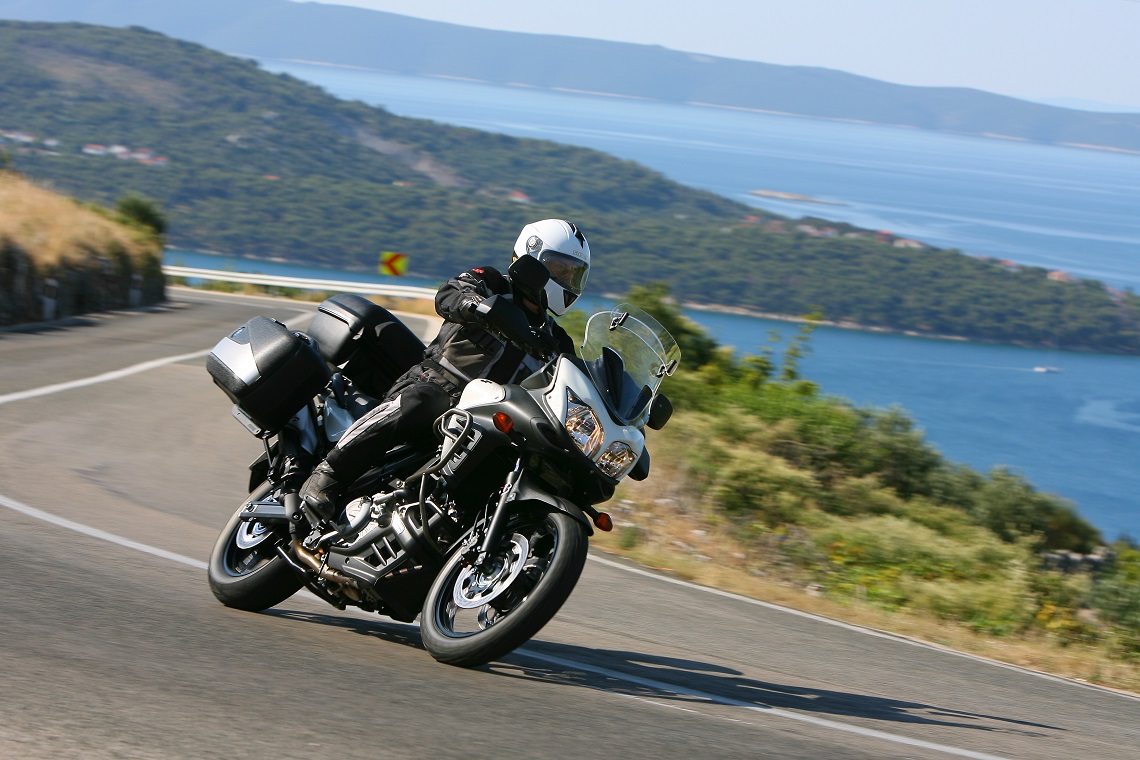 From the moment I rode out of the car park on the Suzuki V-Strom 650 GT, I sensed the beginning of a long and comfortable relationship. This was no racy vamp with an attention span as long and as strong as my bank balance, nor a drama queen determined to demand my total and utter attention. The V-Strom is the non-threatening quite one, who’s in it for the long run, through good and bad. I soon found myself enjoying a life that didn’t involve living in the fast lane on motorways or constantly looking for a window to overtake the car in front.

I was more than happy enjoying riding at a sedate pace, taking time to view and consider the vista I was travelling through. That said, ask the question and the V-Strom is just as happy cruising well above legal speed limits and hustling along B-roads with the more sportier and flashier models.

It comes as no surprise to find out that Suzuki’s best-selling bike for 2012 is the 650 V-Strom. At just under £7,000 for the basic model it offers great value for money in this day and age and far better road touring comfort and performance than any of the other 650-ish adventure styled machines on the market. If it has a weakness then it’s the off-road capability which in its standard form is a no-go on anything other than graded forestry trails.

Economical, adequate performance with a pillion on board and a practical day-to-day bike to boot. It’s difficult to find fault with the 650 V-Strom. 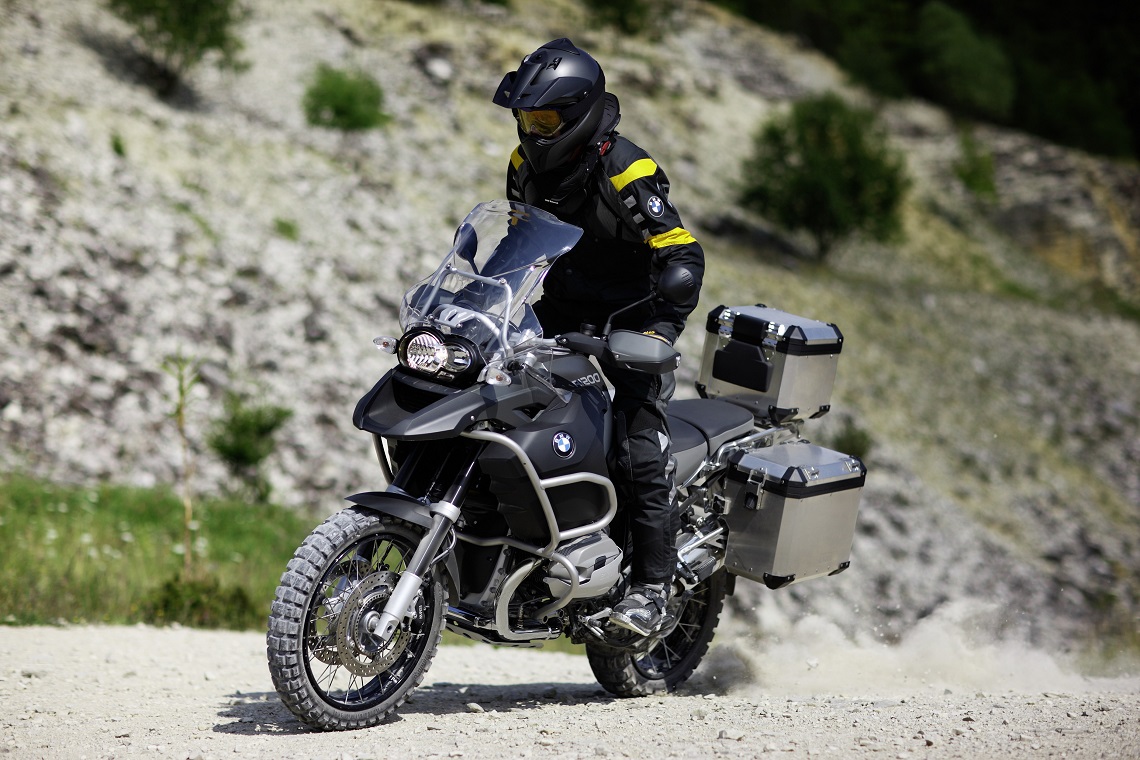 Still top dog – but only just

Competition in the 1000cc + adventure bike market is currently at fever pitch. With Honda and Triumph entering the ring during 2012 and KTM, Aprillia, Ducati and BMW lacing up to do battle with new models in 2013, the choice of models on offer for the ABR has never been better. But is there a unanimous winner on points? The easy answer is ‘no’. However, that’s a reply most readers will feel let down with, so, if forced into a corner with a blade at my throat, my answer to the question would be the BMW GS 1200.

There are faster adventure bikes, there are better-handling adventure machines, there are better-looking (in my opinion) adventure motorcycles, but when all is said and done there is no current machine on offer that does everything as well as the legendary GS. The GS is supremely comfortable, the upgrade in performance from the double overhead cam on new models provides enough grunt and speed for all law-abiding folk and the off-road capability (in the right hands) is nothing other than staggering for a bike of its size and weight.

If you have any doubt about that off-road claim, take a day out at the BMW Off-Road Centre in South Wales and you’ll be amazed at what you’ll end up doing on someone else’s GS. The above makes the launch of the new water-cooled GS 1200 in 2013 all the more important for BMW. Not only will the new bike have to be better than the competition – and the Yamaha Worldcrosser is currently nipping at its heels – but it’ll also have to perform better than the current head of the pack, which is, the current GS 1200.

In my opinion, this is the most critical launch for BMW since the advent of the adventure bike sector and I for one can’t wait to get my hands on one.