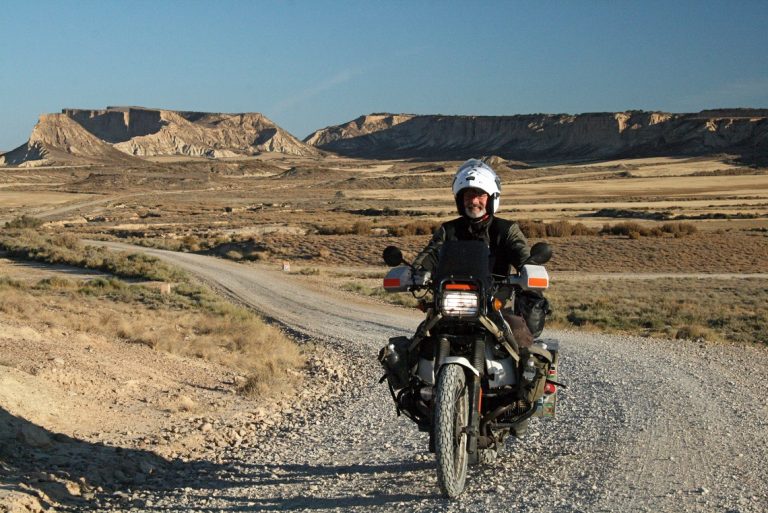 GLANCING BACK AND LOOKING FORWARD

As riders, we all know the importance of taking a final rearward glance. In this New Year’s issue, Sam Manicom looks back on what he’s learnt from his biking travels and how it could enrich our future adventures to come…

There’s one overlanding topic which no one ever seems to write about. I’m prompted to hit on the subject now as a result of one too many festive beers. A common misconception is that setting out unprepared is the biggest risk for overlanders. I have news for you; it’s not.

Misinformation and ill-conceived ideas about peoples, cultures and their politics carry far more risk than having the wrong boots, the wrong stove, or even the wrong tyres. It’s fair to say that the majority of what we all learnt in school about foreign lands and their people has likely been forgotten, and even if it were emblazoned onto our brains, a good deal of it would be out of date anyway.

Most of the knowledge we have now comes from the mass media, and sadly, the bulk of what the media pedals seems to be based on scandal and drama. Part of me wants to laugh at this, because the perpetual scaremongering is so ludicrous, while the rest of me is actually frightened by the level of unbalanced rubbish that seems to make it into print and onto our televisions. It’s rare that we hear an unbiased view of an event or get the full picture.

How can we when the majority of so-called ‘news’ is given to us in sound bites? The sheer volume of stuff that goes unreported is horrifying. It sometimes seems like the whole idea is to keep the reality of the situation under wraps and the general public in the dark. Take Columbia, for example. The mass media would have us believe that it’s full of bandits and cartels which would happily send us into the land of our ancestors at the drop of a trilby.

This may have been true once, but it’s not now, and the media has done little to assuage this stereotype. Likewise, we’re told that Sudan is full of Jihadists – and Mexico? That’s a lost cause. It’s also said of the UK that we have so many bombings it’s not safe to travel here either. Rubbish! You’re more likely to get run over by a London bus!

When was the last time you heard anything about what is happening in Darfour? Anyone know what’s happening in Algeria or the Congo? Zimbabwe has been out of the news for a very long time, and here’s a thought: are any countries in the world doing well financially in these times of recession? Even China is suffering, but did you know that Australia is having an economic boom? The ever-more valuable Aussie dollar makes it an expensive country to overland in now – useful to know.

One of the worst things about by being hammered with flimsy, scandal-ridden news of foreign parts is that we haven’t a clue as to what’s really going on out there. This level of incomplete and misinformation means there’s a real risk of us as ABRs setting off overland with unfounded prejudice in our minds. How can we do anything else when all we hear is doom, gloom and high drama? Worse still, however, is the danger that we might not set off at all.

As overlanders, we need to accept that our knowledge is hugely tainted or we could miss out on some of the most special aspects of our journeys. Fear the locals? No, respect them and learn from them. After all, they live in the place, so they’re the ones most likely to be able to show us the wonderful reality. But even as I acknowledge this, a small voice in the back of my mind tells me that, actually, the media is playing no more of a game with us than many people did on the road with me.

I lost count of the number of times I was told by villagers that the neighbouring settlement was full of murderers and thieves, only to get to that next village and find the people there amazed that I’d survived the evil ways of the villagers I’d just been with! I quickly learned to heed what was said with interest, in case there was any truth in it, but in the main, to treat such comments with a grain of respectful salt. Robert Fulton talks about the same sort of thing in his cult-classic book One Man Caravan. It appears that even back in the early 1930s, this sort of village-to-village scaremongering was going on.

So what should an ABR do? This year, make a New Year’s resolution to rid yourself of the media’s ball and chain. Don’t just take the ‘news’ for granted; question it! Do your homework, learn as much as you can, and then open your mind. There’s huge overlanding value that comes directly from having a calm, levelheaded, well-informed set of thoughts. They can make the difference between you having an amazing trip with loads of interaction with local people, or one where you scoot through stunning landscapes and fascinating cultures with blinkers on.

Make 2013 the year for trusting your instincts; take risks with your eyes open and a grin on your face. Purposefully challenge your preconceived ideas, and enjoy being out there on two wheels in this amazing world of ours. Prove the media wrong, and then come back to share just how fantastic things are. Of course, when you get back from your trip you’ll be talking to those with blinkers on, so share the full picture as well as the fun and dramas. With luck, plenty of people will get your point, and who knows? They may even be inspired to follow suit.